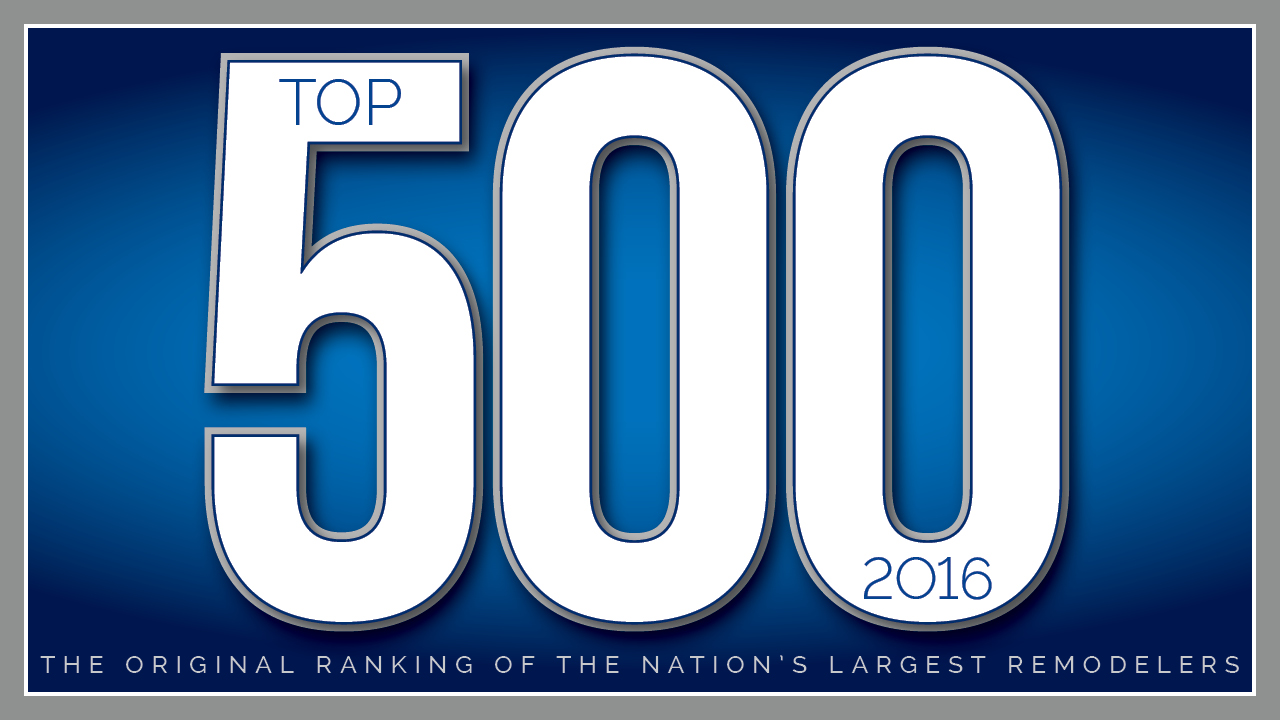 The country’s largest 500 remodelers and home improvement companies — the QR Top 500 — are having a very good year. Combined gross revenue is $8.53 billion, up $970 million or 12.8 percent year-over-year.

With U.S. GDP increasing at only 1.2 percent annually, the robust growth of the Top 500 contrasts sharply with the broader economy. This stands to reason. Big firms, like the ones on the Top 500, are growth focused. They intend to get bigger faster.

Power Home Remodeling, No. 4, is a good example. The 24-year-old exterior-replacement company tallied $376 million in sales in 2015, up from $301 million. And the top-line trajectory continues. Co-CEO Corey Schiller forecasts the company will likely hit $425 million for 2016. It is the kind of dynamic growth that is only achievable with a combination of organic “same-store” growth along with new offices in new markets.

Schiller says the company is engaged in a “50-state strategy,” opening locations in Houston, Dallas and Denver this year.  And, “in 2017, we’re poised to open up more offices down south and in the Midwest until we reach every major city in the U.S.”

While all firms are not growing at the same clip as Power Home Remodeling and another fast grower, No. 2 Window World — which grew by $58 million last year — strong growth is a theme across all segments and ranks of the QR Top 500.

Santa Barbara-based, full-service icon, No. 54, Allen Construction posted $23.6 million in remodeling-only revenue, up $3.5 million from the year prior. Company President Bryan Henson credits the company’s strong relationships with architects and interior designers who drive a stream of referrals year-after-year. “Their vote of confidence in our capabilities is tremendously meaningful to homeowners,” Henson notes. Satellite offices in Santa Ynez, Calif., and Los Angeles have also played a big part in Allen’s growth.

Likewise, Minneapolis-based No. 334, Vujovich Design-Build Inc., is experiencing 15 percent annual growth in recent years, finishing at $3.67 million last year. More significantly, the company has been able to grow its gross profit by 20 percent annually, says company Owner/General Manager Ed Roskowinski, CR. “Nothing new here; repeat clients continue as our greatest source of quality leads.” Internet leads are up, but the quality is not the same, he says.

Some remodelers are enjoying the growth but are less optimistic about the road ahead. Respected suburban Washington, D.C., professional David Merrick, CR, says his firm, No. 359, Merrick Design and Build, grew to $3.35 million in 2015. This year, however, he is scaling back to $2.5 million in order to focus on increasing profit margins and to batten down the hatches during what is a tumultuous election year.

“The economy is doing much better, and we’ve recovered to previous highs in real estate and stock values, but I don’t see the confidence that should be accompanying these highs,” Merrick explains. “I believe there is a sense among clients that it could all go south at the drop of a hat, and that is reason for caution.”

Like many successful remodelers, referrals remain the lifeblood for Merrick, but Internet leads, particularly from websites like Houzz.com, are having a positive impact. “The leads that come in are not as strong as referrals, but we do get work from them,” Merrick says.

The Challenge of Hiring and Retaining

Although stronger demand is driving remodeling and home improvement to new heights, a consistent limitation cited by many is the availability of qualified sales personnel and project managers. By far, the toughest business challenge faced by remodelers is how best to attract, hire and retain top talent.

Roskowinski says his firm, Vujovich Design-Build, works directly with a local trade school to recruit new production staff, which is important because most of his team is in their 50s and his company is growing. Retention is less of a problem for Roskowinski because the company chooses a compensation approach few would offer: Fully 30 percent of the Vujovich’s net profit are distributed to its employees at the end of each year. This is backed by shared financials. “We have never had issues retaining good people,” he says.

To Earl Rahn, CEO of No. 29 NewSouth Window Solutions, attracting and retaining business partners and employees has always been a key business driver. According to Rahn, who opened several new locations in its home state of Florida, the company’s extensive advertising presence “seems to attract people in sales and management,” he says.

Similarly, Cleveland-based No. 16 company, Universal Windows Direct, is a big marketer with ambitious plans. The company, which grew from $42 million to $51 million last year, is hiring a recruiting manager this year to handle emerging staff requirements. “With the plan to grow in effect, we must find great people along the way,” says Michael Strmac, owner and co-founder of Universal. “We have been blessed by low turnover and have been able to promote from within our company.”

Perhaps the most noteworthy difference between today’s remodeling peak and the one experienced a decade ago is two-fold. First, while today’s underlying demand for remodeling and home improvement is strong, it is not an obscene, cash-out, refinance-driven bubble. Second, the winners today are long-time pros who, chastened by the downturn, are managing and controlling their upside. With numerous regulatory and staffing headwinds, today’s market is tough, even punishing on the average Chuck-in-a-truck.

Gary Allen, owner of No. 338 company, Allen Kitchen & Bath based in Madison, Wis., typifies today’s remodeling market winner. His company is up to $3.6 million in sales from $3.3 million, and he’s doing it via a very nuanced marketing mix that includes home shows, Facebook advertising and uber-targeted postcard mailings, Allen explains. The postcard effort is backed by specific digital landing pages for each card in a three-mailing series. It has given the company a 30 percent increase in appointment requests from its revamped website.

Ray Wiese, owner of No. 375, The Weise Company in Sherborn, Mass., is seeing growth in job sizes post contract signing. “Clients are adding onto projects before and during the budget process and upgrading many allowance items,” Wiese says. “We are experiencing growth and have elevated our team internally to allow for a scalable plan that maintains our quality experience. As business picks up, more remodelers should focus on the projects at hand without grabbing too much work. That can easily create slippage and mean less profit for more work.”

Even fast growers like NewSouth Windows are enjoying the opportunity to grow in a methodical fashion. The company breaks ground on a new 232,000-sq.-ft. factory this fall with plans to open locations in Fort Lauderdale, Fla., in 2017; Bonita Springs, Fla., in 2018; and Jacksonville, Fla., in 2019, says Earl Rahn. “Controlled growth is the name of the game for NewSouth Windows for the next three to four years. We are growing geographically and we must make certain we can keep up with the demand for our products.”