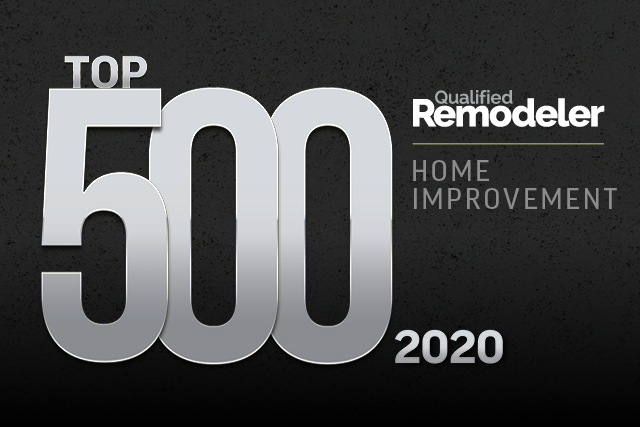 Mechanicsburg, Pennsylvania, may not be the first place you would peg as breeding grounds for one of the home improvement industry’s top 10 companies; but if you’ve met the owner and CEO of West Shore Home, BJ Werzyn, you understand why. It is Werzyn’s hometown and his base of operations over the past decade as West Shore has gone on one of the fastest growth sprees in memory.

In short succession, they have acquired and grown strong existing window-and-bath firms in North Carolina, Kentucky and Florida. In addition, the company has launched new West Shore branches in Atlanta, Tampa, Dallas and Charlotte. Werzyn is perhaps the most aggressive-minded home improvement company owner in an industry filled with bold entrepreneurs. 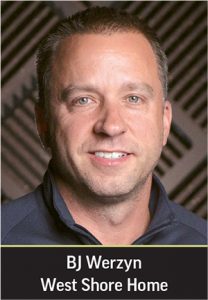 Werzyn’s objectives for the remainder of this year and for 2021 are no less impressive. West Shore is on track to hit $366 million this year and a jaw-dropping $700 million next year. The goal, Werzyn says, is one gigantic national firm in an industry that is overdue for consolidation.

“It’s crazy that there’s a $250 billion market (professional home improvement) that is completely fragmented,” he says. “I mean, there really is no national brand. There are some affiliate franchise programs like Renewal by Andersen and Window World, but I don’t know if I really consider them to be national brands. So, I think we’ll be the first that’s going to have a national footprint in multiple vertical markets in terms of windows, doors [and] baths. And once we capture market share in those spaces, then we’re going to add other things, flooring or other home services.”

If all goes to plan, Werzyn notes, the company will ultimately grow to $5 billion in revenue just for windows and baths, a 10 percent share of a $50 billion combined vertical. 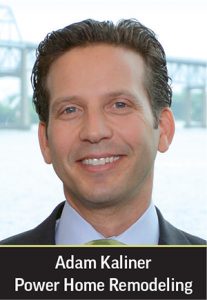 Werzyn is not alone in his ambition to create a single national home-improvement entity, operating coast to coast. At nearly $800 billion, No. 2 Top 500 company this year, Power Home Remodeling, has been on an amazing growth trajectory, purely through organic company growth, to a target of $2 billion by 2022. Power has built a brand and a human resources machine capable of scaling to these levels based on a very strong sales and marketing process that is based on canvassing. Indeed, massive recruiting and training efforts are the common thread among fast-growing home improvement firms on this year’s Top 500. Firms cannot grow without good people who take care to maintain their brands.

For West Shore and Power, leadership development is an everyday focus. Werzyn has found success finding capable leaders by zeroing in on former members of the military. In the process, he has forged a partnership with Jocko Willink, a former Navy Seal team leader, who now stars in one of the most popular business and leadership podcasts in the United States, The Jocko Podcast. Willink’s leadership development consultancy, Echelon Front, is tied in closely with West Shore as it pursues its aggressive plan. At the installer level, West Shore operates a regional training center in Raleigh, North Carolina, and is looking to open a similar facility in Dallas.

Across the country in Anaheim, California, Reborn Cabinets, No. 27 on Top 500 with $55 million in sales on 3,775 jobs, has also been aggressively growing its company, opening four branches in California and one in Las Vegas. Twelve months ago, company CEO Vince Nardo said his firm would hire and train more than 100 employees per year as they scale up their operation. 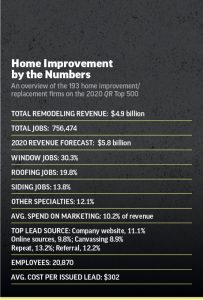 The Quest for Leads

With broad ambitions abounding nationwide, home improvement entrepreneurs naturally are focused on finding new ways to drive more and better leads. Chris Behan, owner of Socius, a marketing agency specializing in home improvement, says his clientele of more than 200 firms is focused primarily on creating websites that do a better job of converting inquiries from a wide variety of sources into potential appointments. This work is critically important, he says, in an environment where issued leads often exceed $325.

The quest for leads has only grown in recent months as the COVID-19 pandemic has taken hold, resulting in the loss of hundreds of important home shows and events, which has become a key pillar of lead generation for many firms. 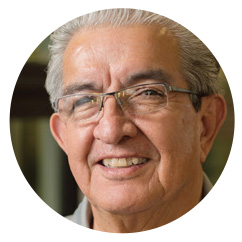 West Shore’s BJ Werzyn says the early days of the pandemic, with a wide range of business shutdowns in place, offered an opportunity for the company to inexpensively purchase radio and TV time to run more ads in many of its markets. It was “very fortunate,” Werzyn says, because they were flush with leads as a result by the time the shutdowns ended in most places. Larry Chavez, owner of Albuquerque, New Mexico-based DreamStyle Remodeling, which operates in six states, said he initially tried to scale back on broadcast advertising buys in California and elsewhere during the shutdown era. Fortunately, he says, most of those buys stayed in place, resulting in the company’s best 30-day period on record during late April and early May. The company quickly set up its call-center employees with the tools they needed to manage calls from home.

Despite the momentary dip in lead costs in March, April, May and June, the outlook is less rosy as the election season heats up and costs rise, particularly in states where the competition for votes will be fierce, say the home improvement company owners interviewed for this article. Beyond that—and into next year—there are hopes that home shows and events will come back, but most business owners are not counting on that and are investing in boosting online sources. Time will ultimately tell, but with overall demand for home services remaining strong among homeowners, the industry is poised for growth in the foreseeable future. QR