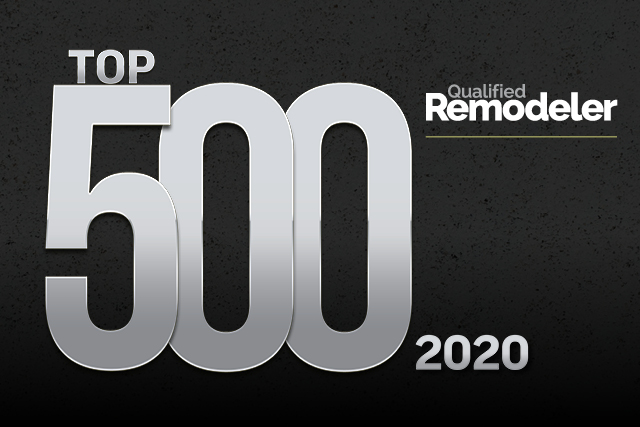 The 42nd annual listing of the largest 500 remodeling firms in the U.S.—the QR Top 500—is a showcase for the dynamism and energy of the industry. Of the 500 firms listed, 354 posted year-over-year revenue gains. Of those, 243 put up double-digit percentage gains, while 169 grew by 20 percent or more. Nowhere was growth more evident than within the top 10.

New Names and a Slight Reshuffling

Perennial insurance-restoration giant, BELFOR Holdings, hung onto the No. 1 spot overall with $1.67 billion in gross remodeling revenue on 152,000 jobs. Pennsylvania-based giant Power Home Remodeling edged out Window World for the No. 2 position on the list. Power posted $793.5 million in remodeling revenue against 60,512 windows, roofing and siding jobs via its 21 wholly owned branch locations in the U.S. Window World is the No. 1 national company. “Nationals” are firms with widespread dealer networks. The company posted $789.5 million on 183,177 primarily window jobs across its 221 independently owned dealers.

LeafFilter Gutter Protection, led by CEO Jeff Beck, traded positions with ResiPro as they locked in the No. 3 and No. 4 positions, respectively. LeafFilter added $240 million in revenue across its wholly owned locations to post $581 million on 162,536 jobs. ResiPro, a whole-house renovation, maintenance and property preservation firm that serves institutional owners of single-family homes, including those of its parent company ResiCap, posted revenue of $379.4 million last year on 6,625 jobs. The No. 5 company, long-time powerhouse, Champion Window, posted installed volume of $290 million (no manufacturing included) on 23,101 jobs from its 54 retail offices. Champion is up one spot from 2019. 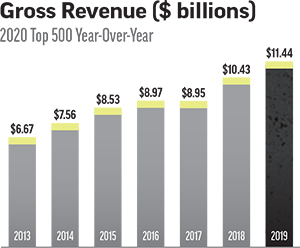 Fort Lauderdale, Florida-based home improvement firm FHIA Holdings LLC, grew to $278 million to capture the No. 6 position on the list, up from $140 million the year prior. Its growth came primarily through the acquisition of Dallas-based Statewide Remodeling in 2019. In early 2020, FHIA also acquired Madison, Wisconsin-based Mad City Windows and Baths. That acquisition was not completed in time to be counted for this year’s ranking.

Perhaps the newest name in the top 10 is West Shore Home. It used a combination of new greenfield locations, key acquisitions and organic growth to claim the No. 7 spot. Company owner BJ Werzyn has overseen hyperbolic growth, posting $220 million in remodeling revenue on 23,206 window and bath projects last year. Werzyn, who says he is aiming to build the first national remodeling brand wholly owned by one entity, is projecting $366 million in sales for 2020. How is West Shore tracking for the year after, 2021? A jaw-dropping $700 million, Werzyn says. 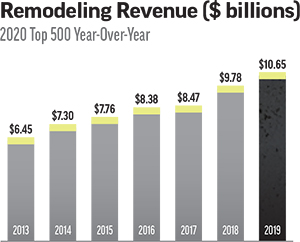 The No. 2 national remodeler is Re-Bath LLC. This year, the franchise organization posted $220.2 million in revenue on 20,043 jobs across 97 independent locations. That is up from $205 million a year earlier. Ranked No. 8 is another new name, basement specialty firm Groundworks, based in Virginia Beach, Virginia, with $174.5 million in revenue on 21,389 jobs. At No. 9 is Window Nation, which posted revenues of $162.5 million, up $36 million from a year earlier. For all of its gargantuan growth efforts, it fell two spots, down from No. 7 in 2019. 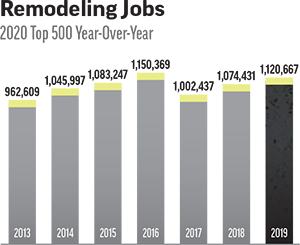 The No. 10 ranked company on the 2020 Top 500 operates in the full-service contracting segment of the remodeling industry—remodeling apartments, condos and co-ops for an elite clientele in New York City. Josh Weiner’s powerhouse firm, SilverLining Inc., posted $143.6 million in residential remodeling revenue on 45 jobs in 2019.

The top 10 firms (plus two nationals) were up more than $500 million in sales and up 85,000 jobs versus the year prior. By comparison, total revenue for the remaining 490 firms matches the top 10. It shows that remodeling remains largely a small, local enterprise, but the big are getting bigger. QR