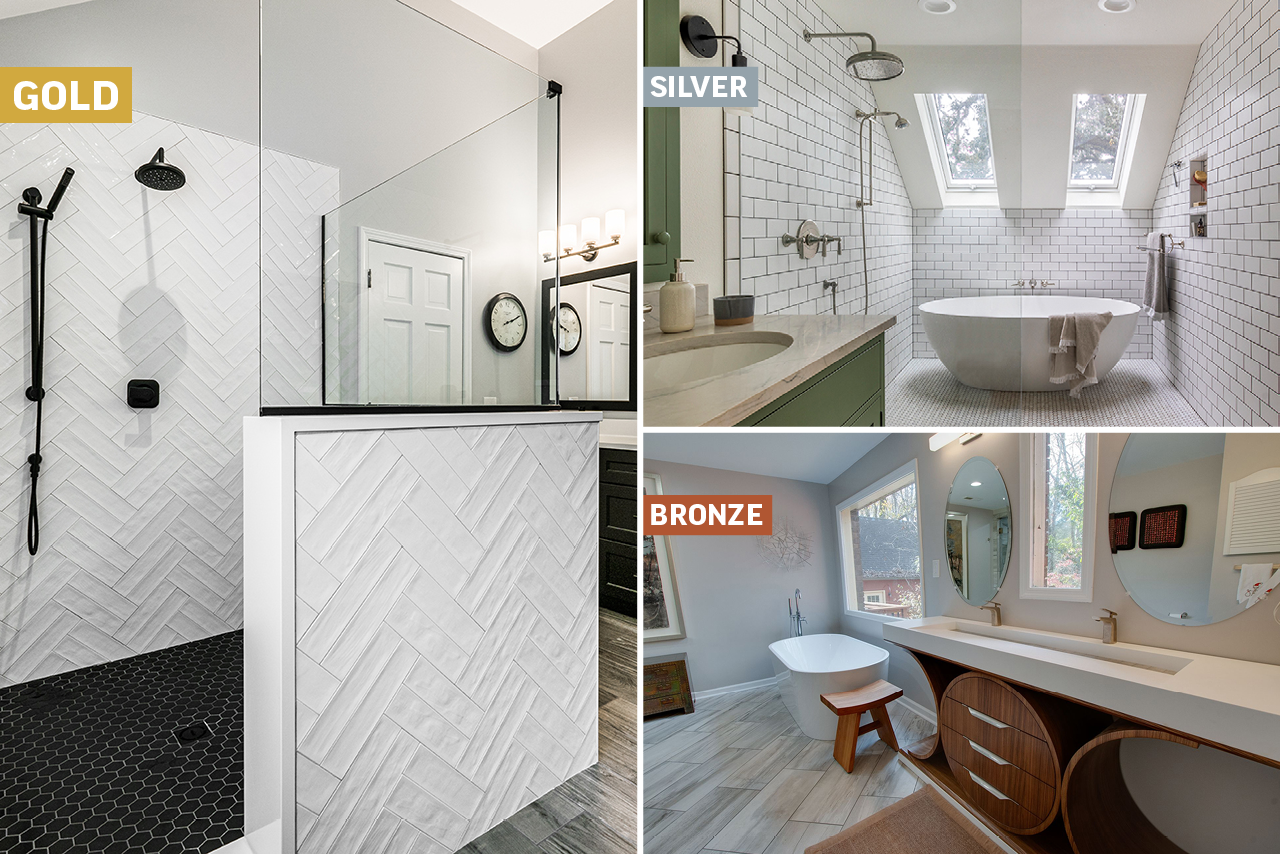 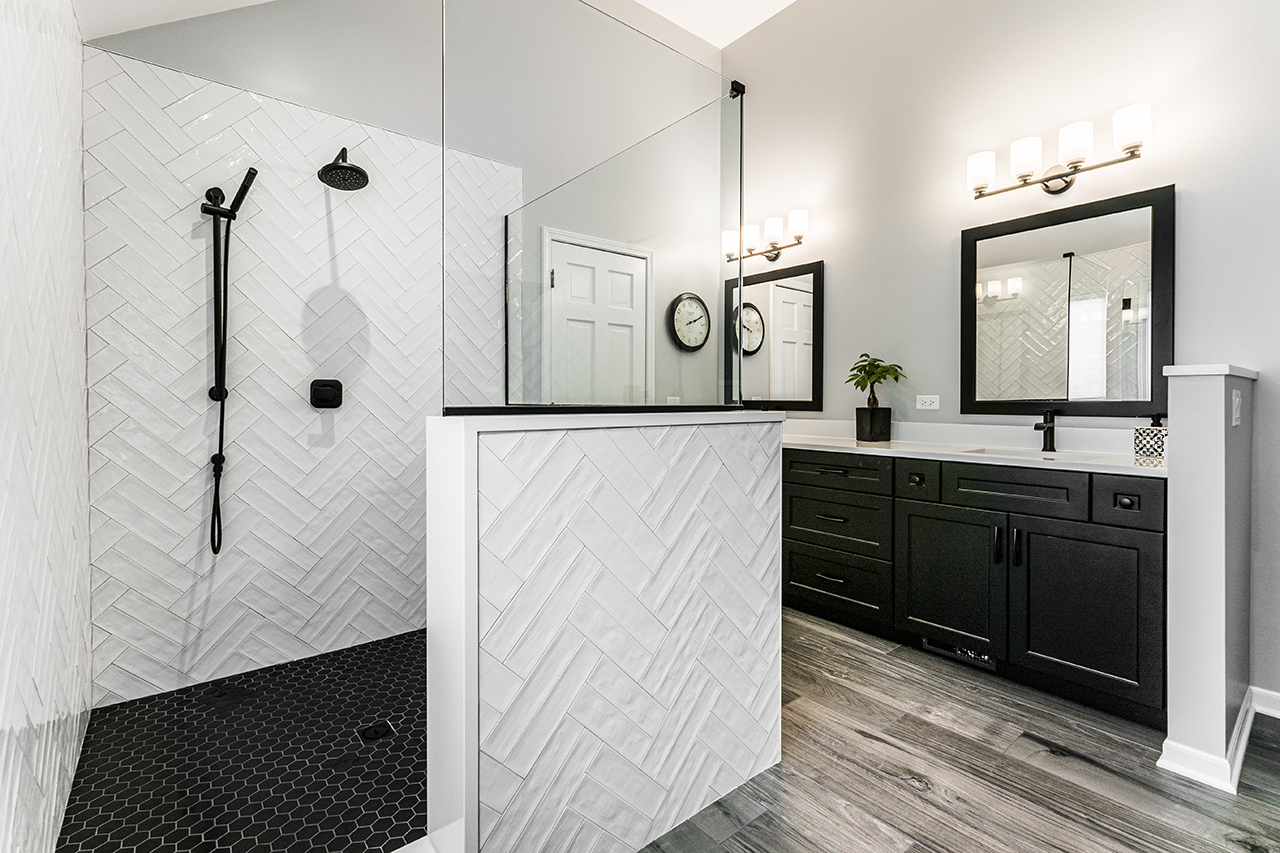 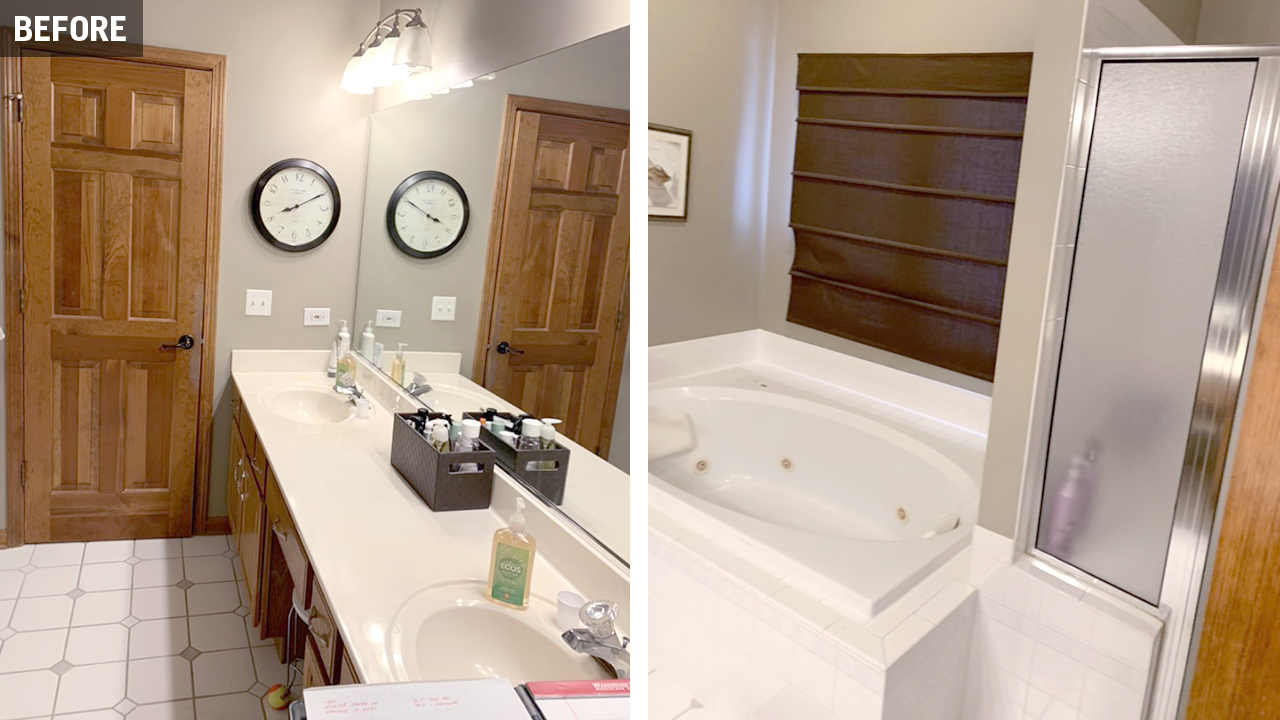 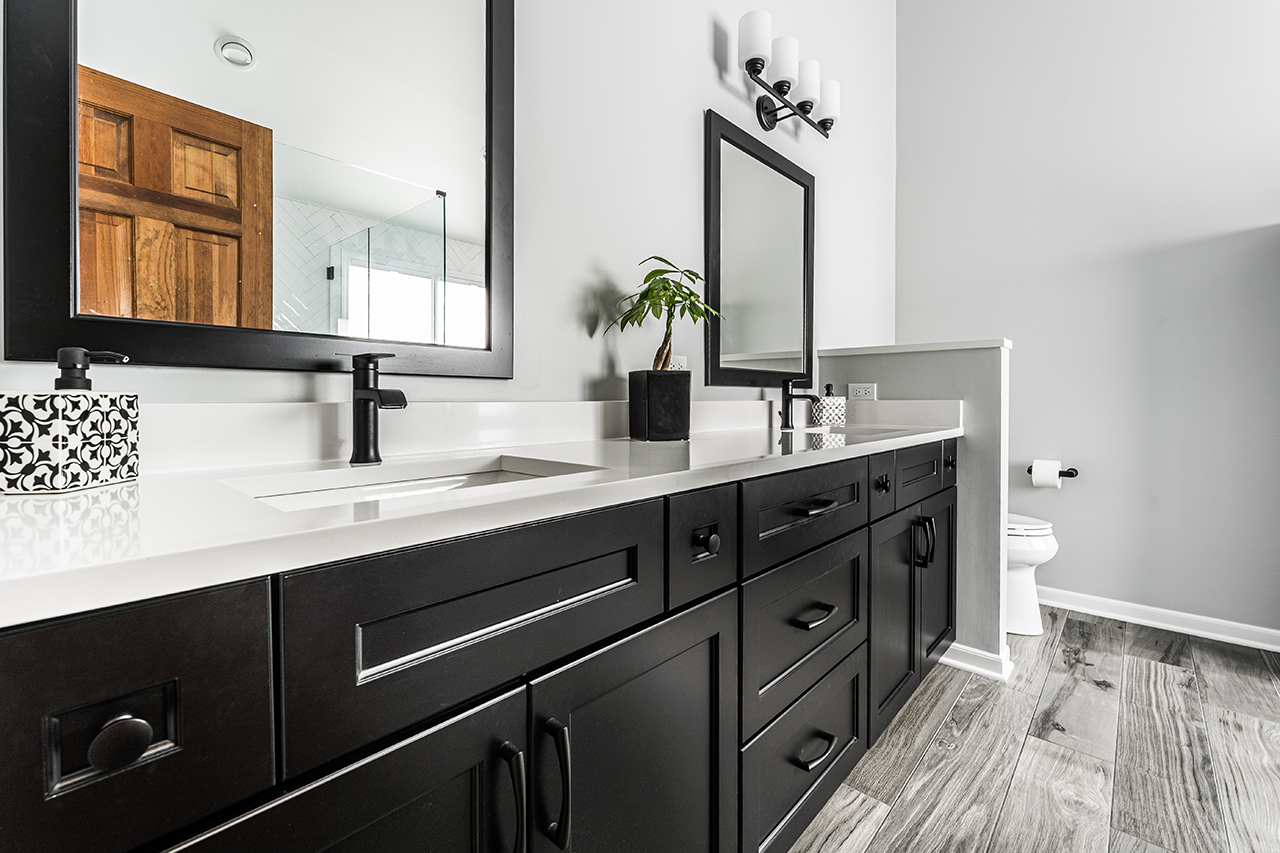 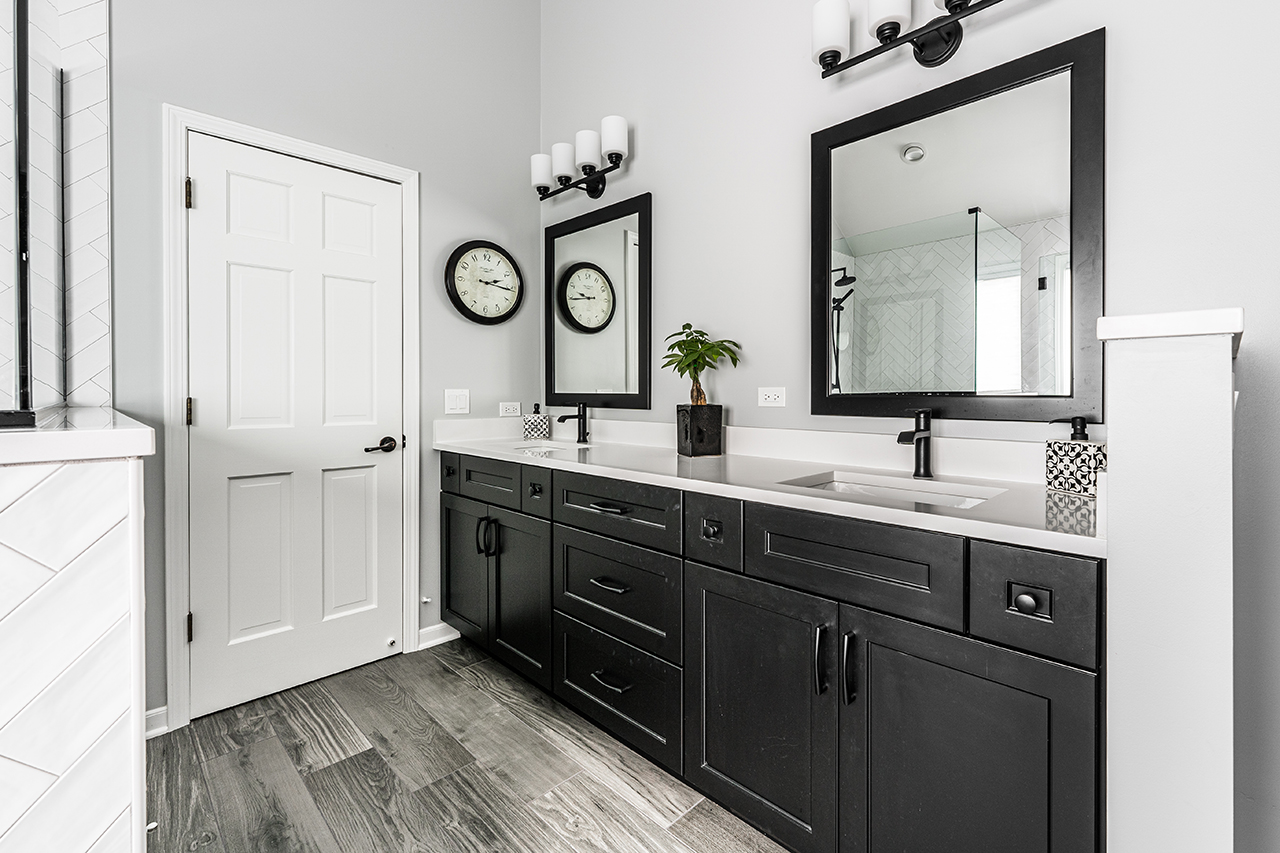 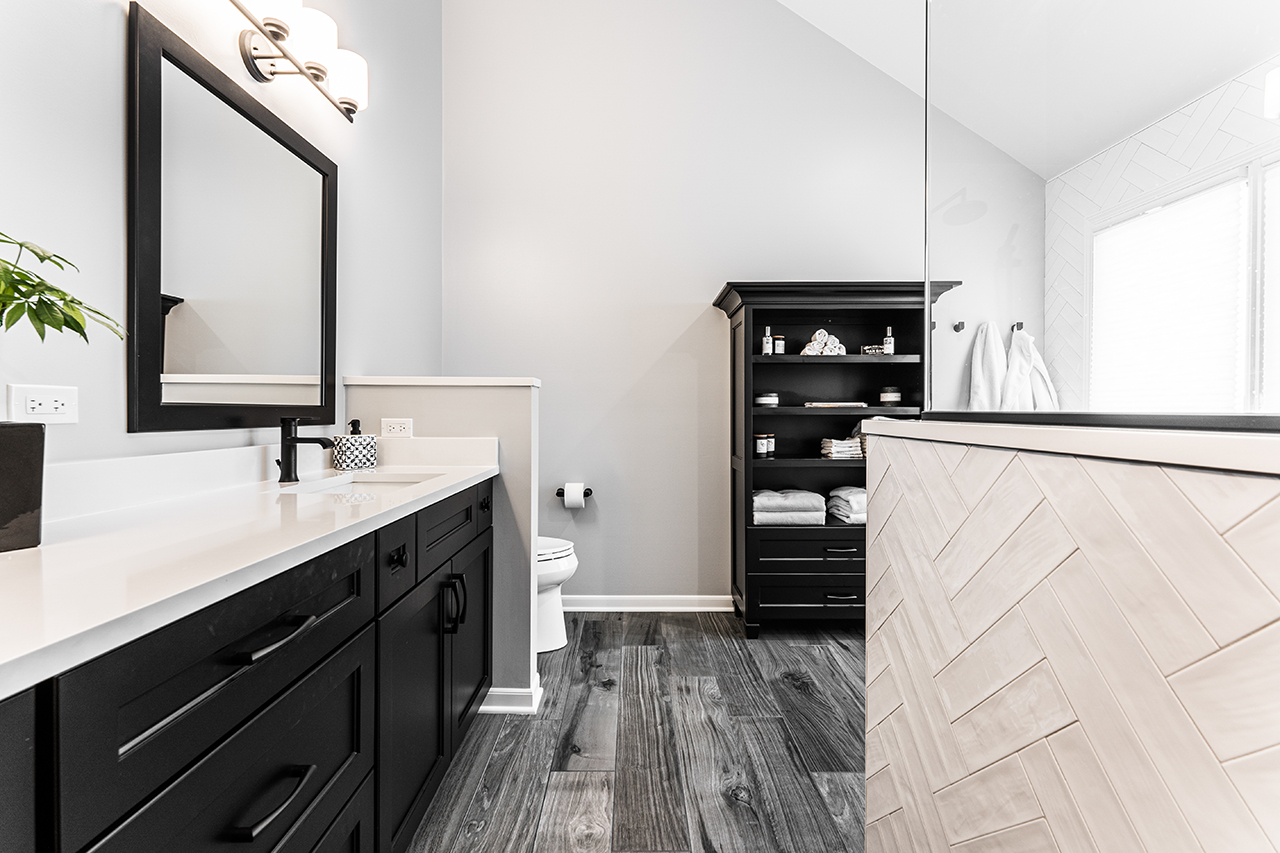 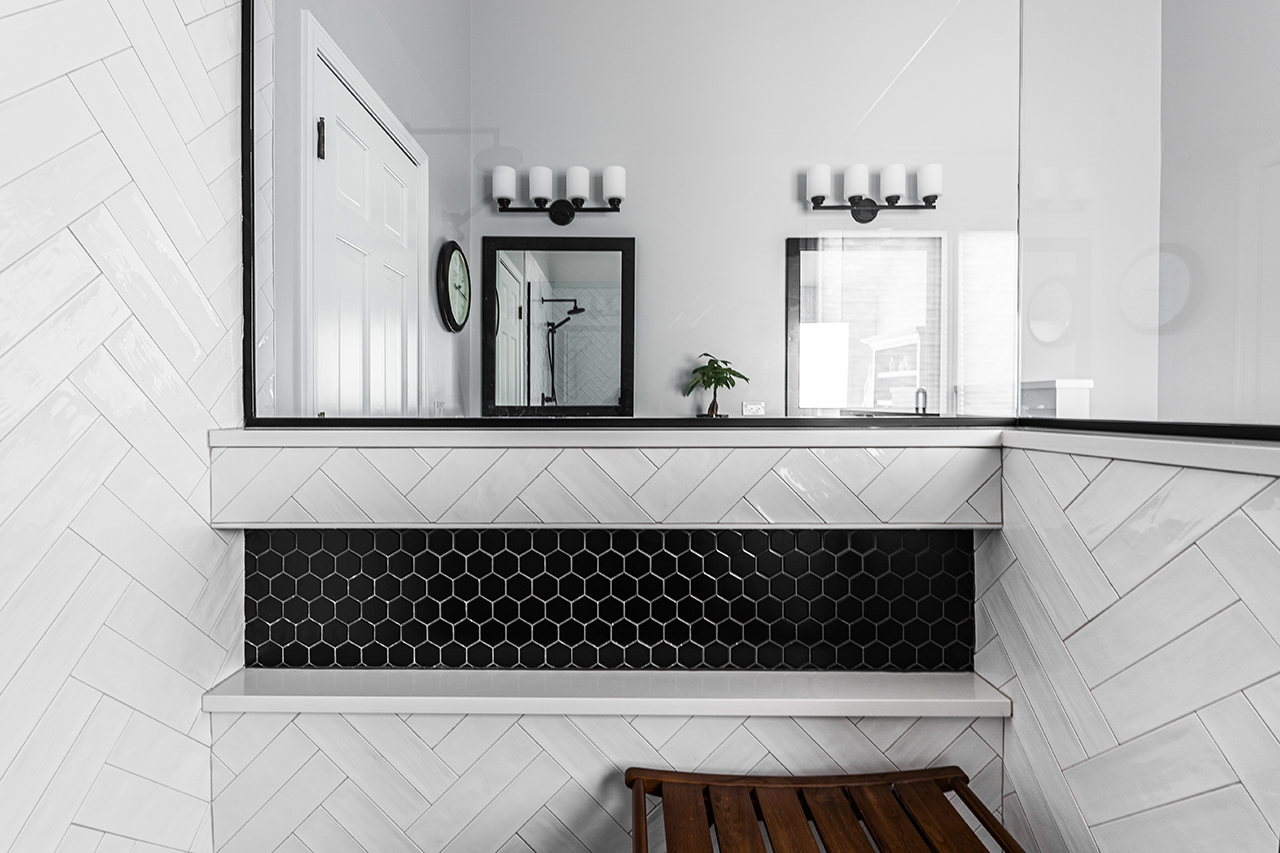 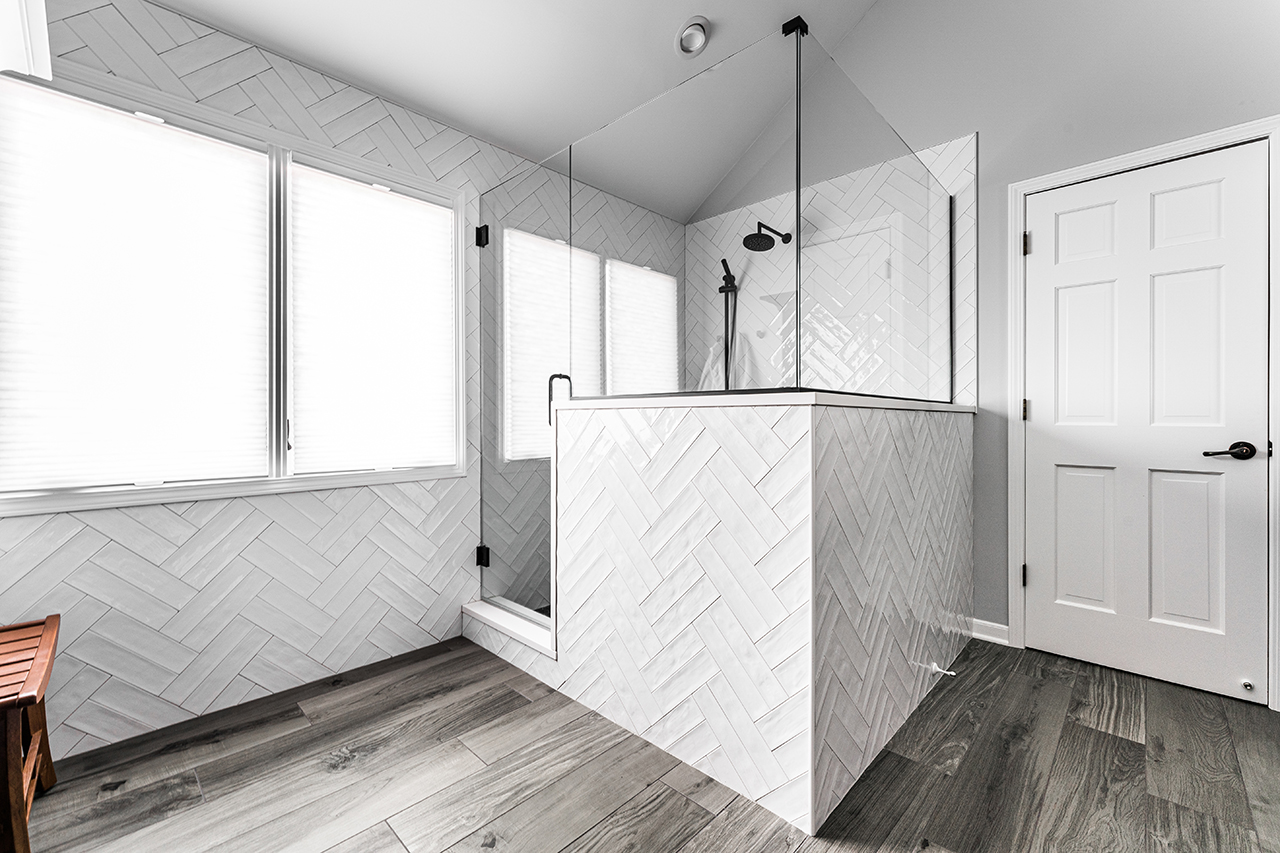 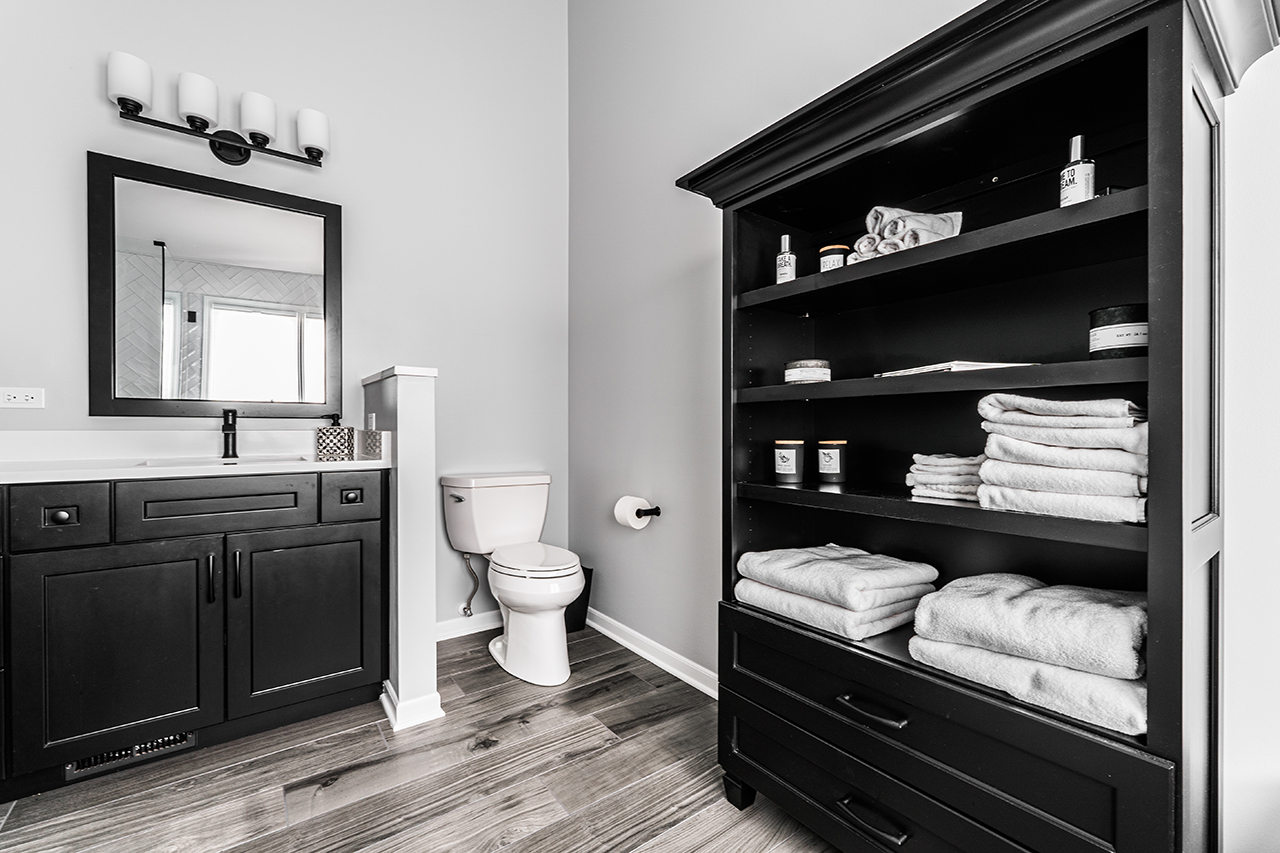 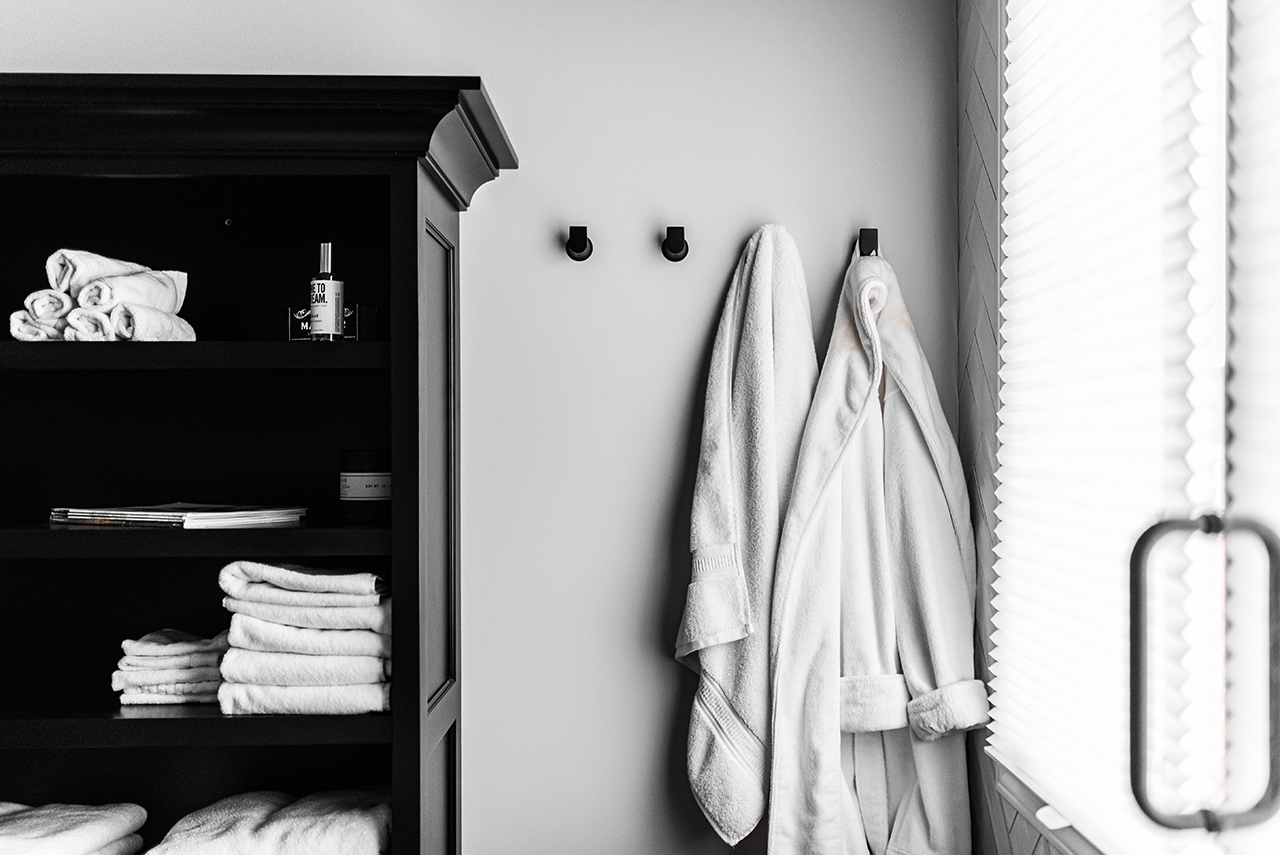 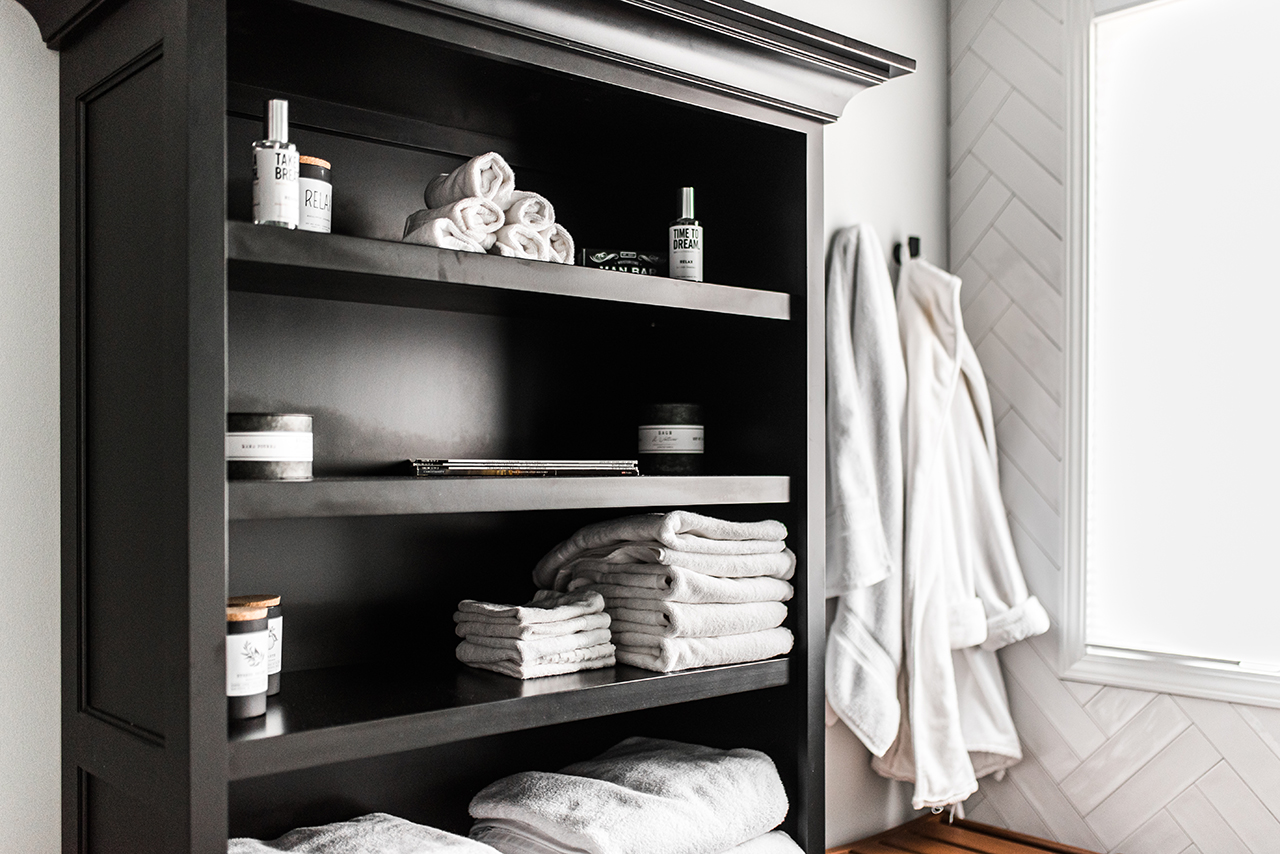 The clients wanted to remove a built-in tub and increase the size of their shower, but the location of the window limited how large they could make the shower. They were skeptical about having a big, open area in front of their window, thinking that it would feel out of place and empty. The design process started in March 2020, right when pandemic shutdowns were becoming effective.

The company enlarged the shower without relocating any windows because of a break between the two window sets. This made for the best of both worlds, allowing for maximum natural light and a much bigger shower with the outdated tub removed. The company decided to add a cabinet and robe hooks to the open area to make it more purposeful and to support a spa-like atmosphere. 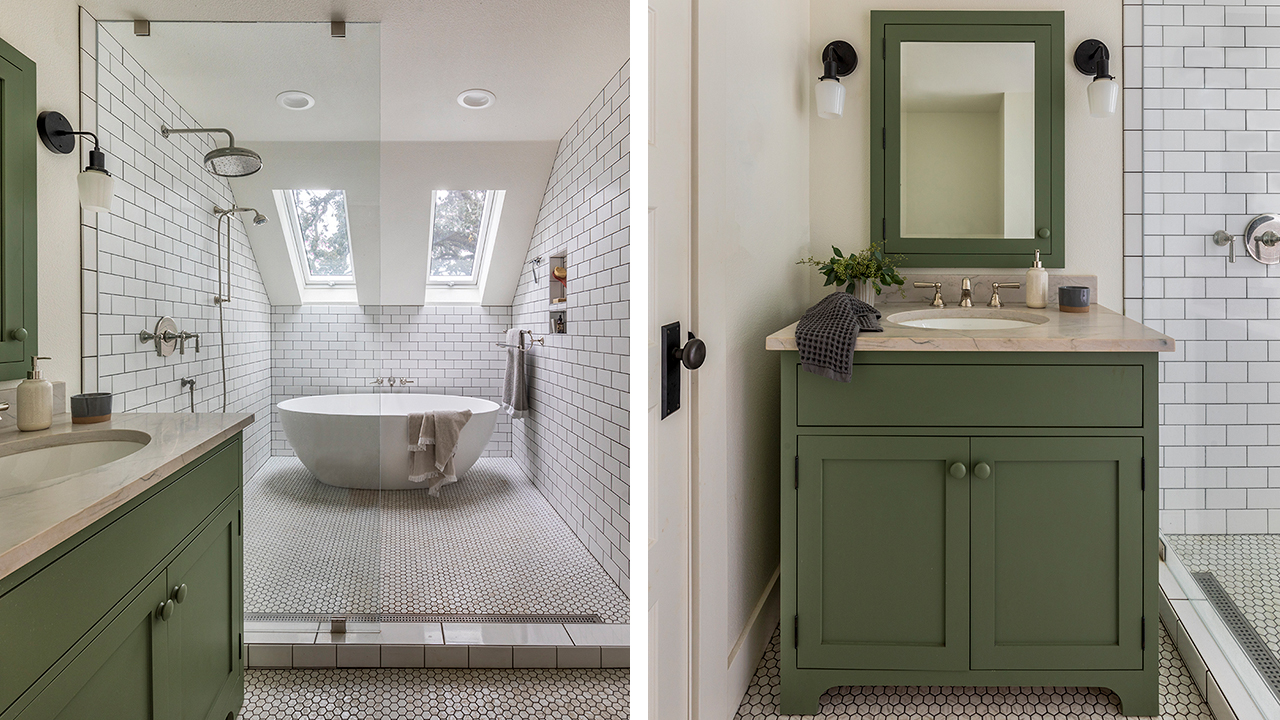 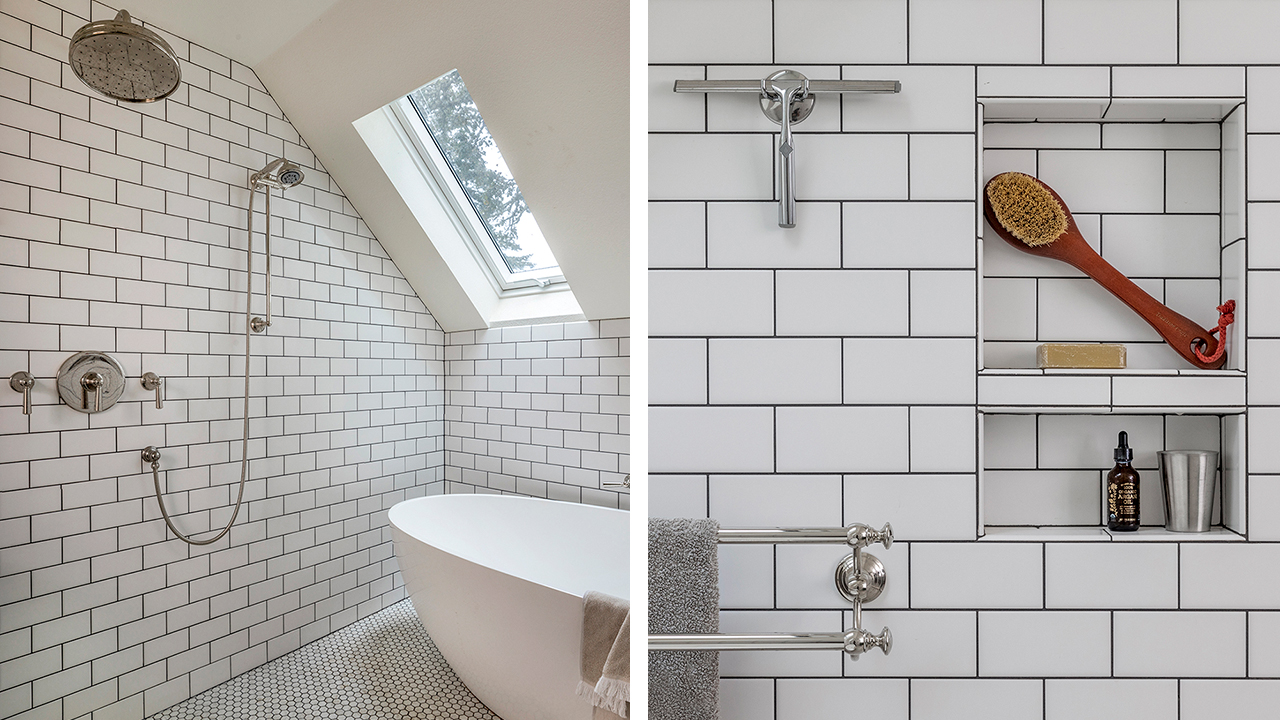 This farmhouse was typical of a bygone era when the main floor bathroom served the entire house. To improve convenience and family harmony, the homeowners needed a second-story bathroom. Their wish list included a designated “wet area” with a soaking tub where their kids could be kids when bathing without having to deal with the mess.

They also wanted the space to double as a relaxation zone for grownups with a spa-like shower, soothing colors and abundant natural light. This was accomplished by transforming a hallway and closet area into a bathroom that delights both kids and adults.

The clients’ wish list for the new bathroom included a large shower, soaking tub and a source of natural light. Along with that, they needed low-maintenance materials and adequate storage. The scope of work included changing the existing closet layout and capturing a large hallway space to provide enough room for a full bathroom.

Since there was no upstairs bathroom or plumbing to start with, the placement of every element had to be very strategic. Working within those parameters, the team had to create a flat surface for the free-standing tub inside the wet area.

The homeowners wanted a curb-free shower area, but to get proper drainage of the plumbing lines, they compromised with a low-curb entry. They solved the challenge of providing natural light in the sloped-ceiling room by adding large skylights in the tub/shower wet area. 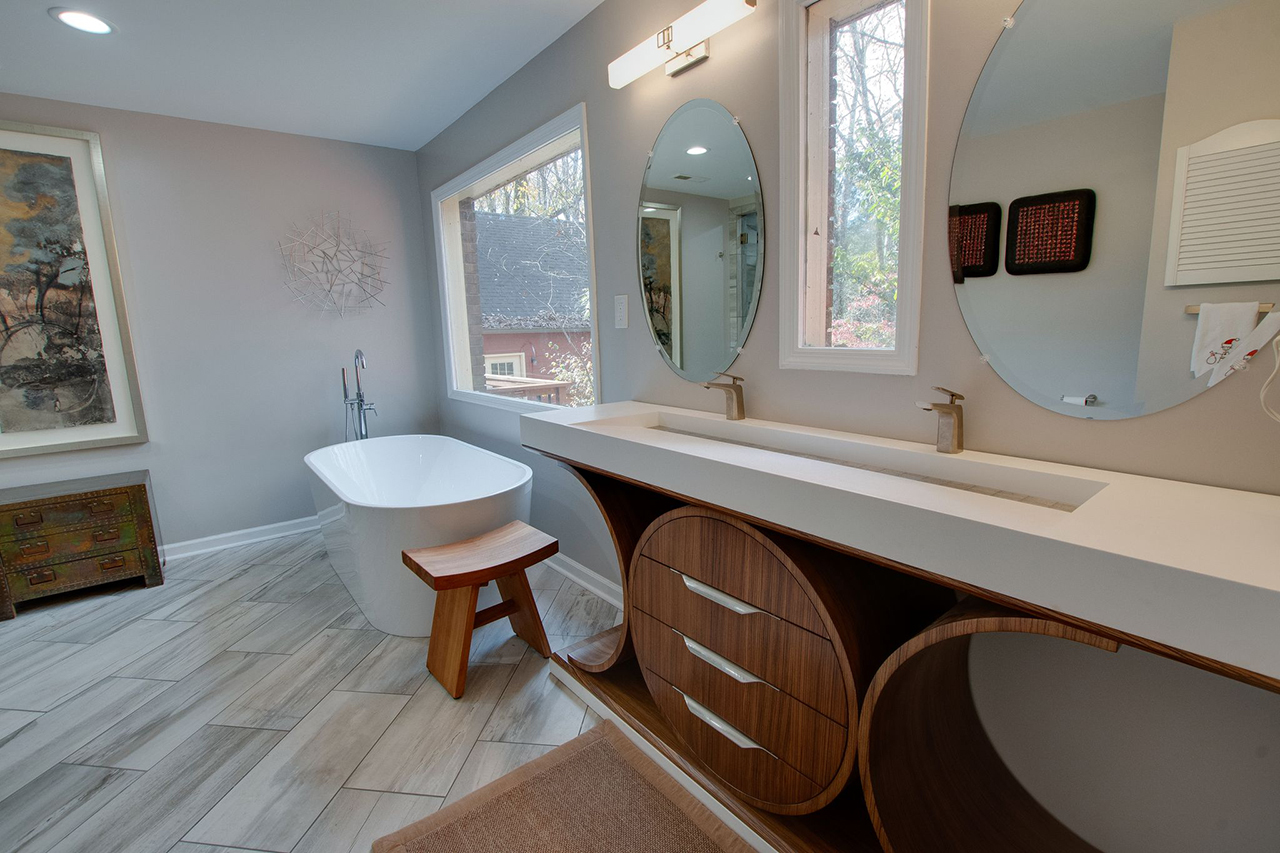 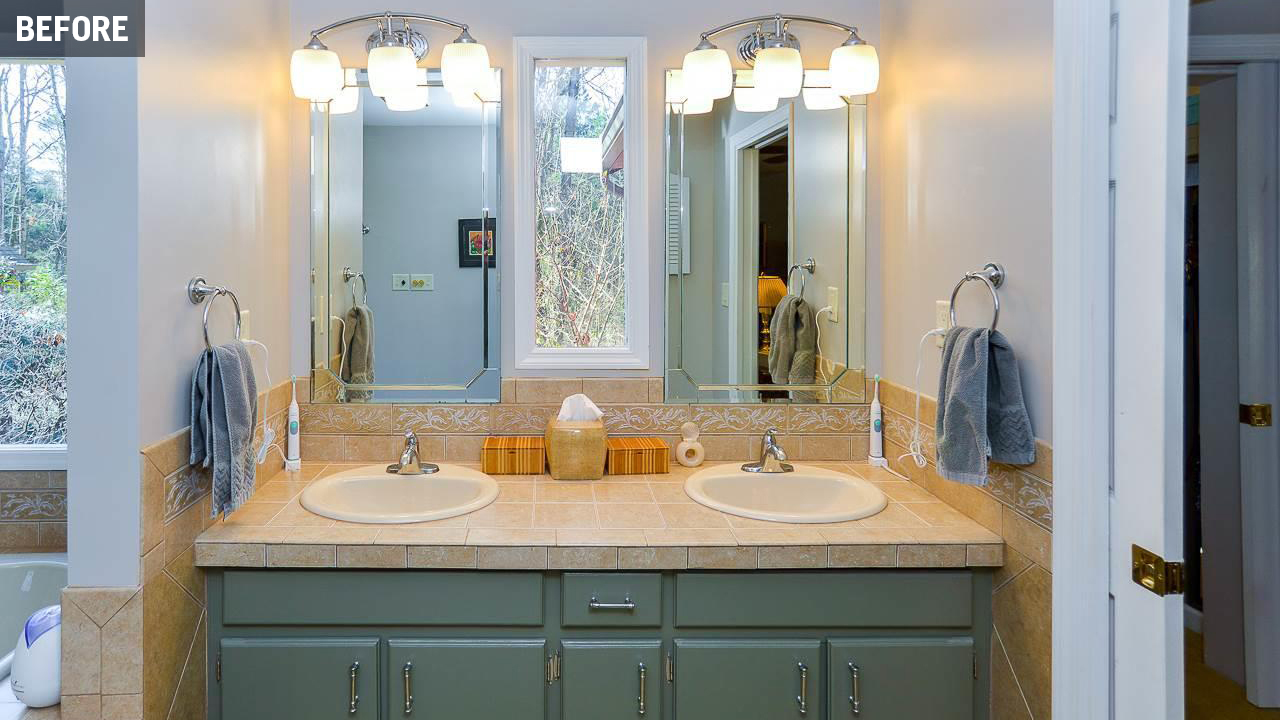 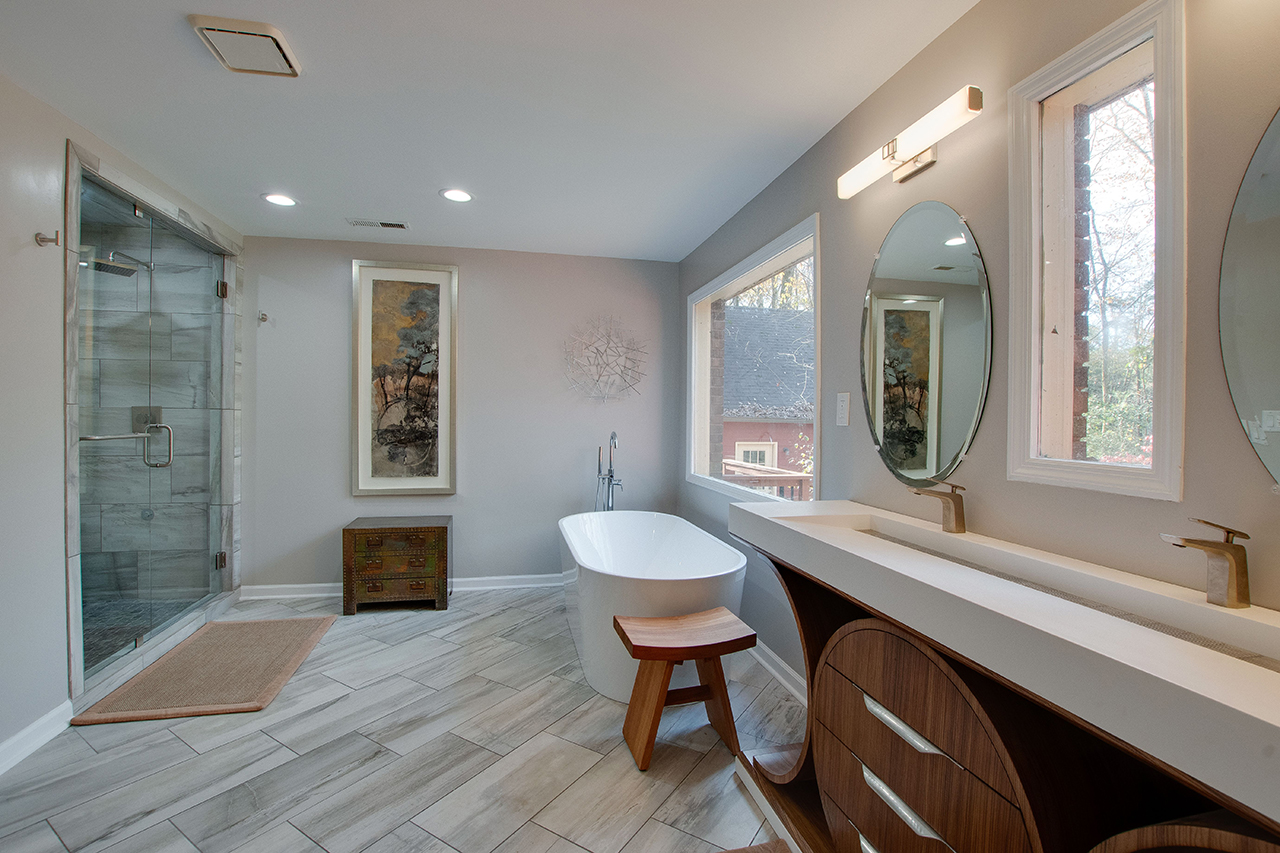 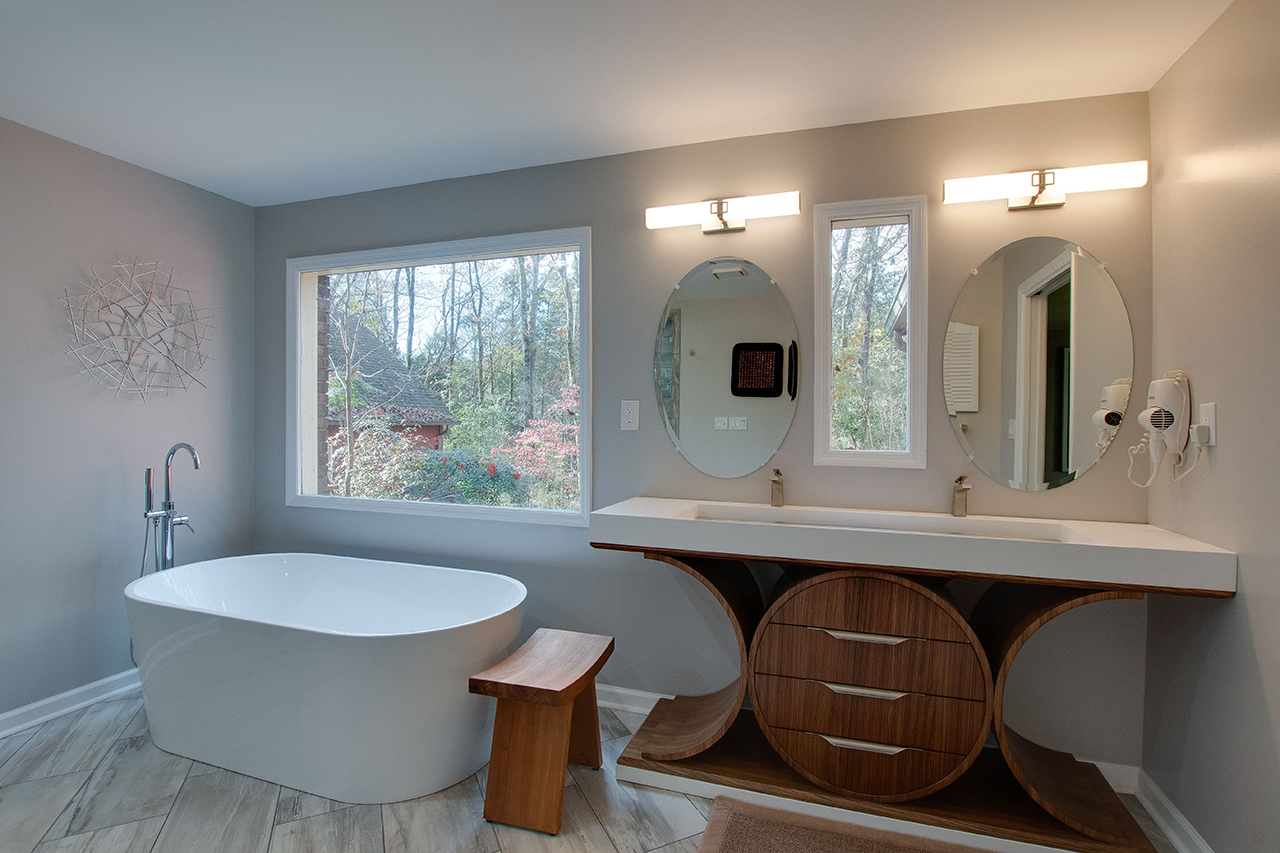 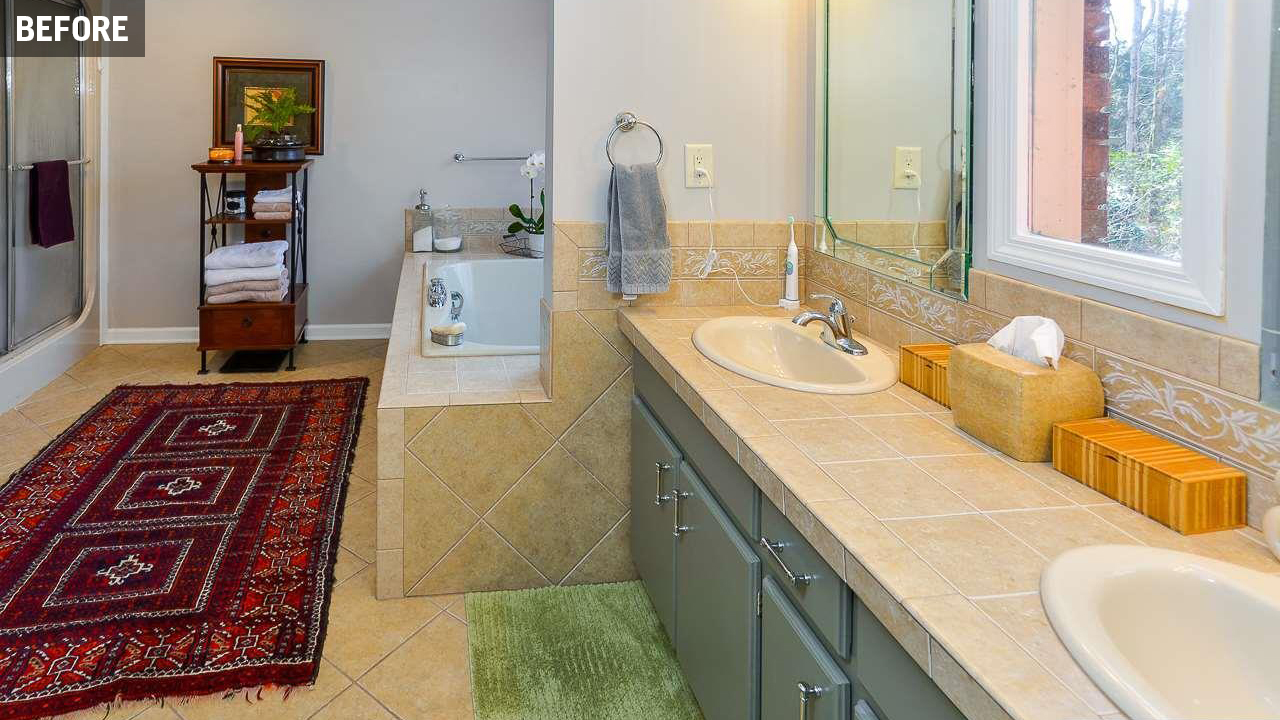 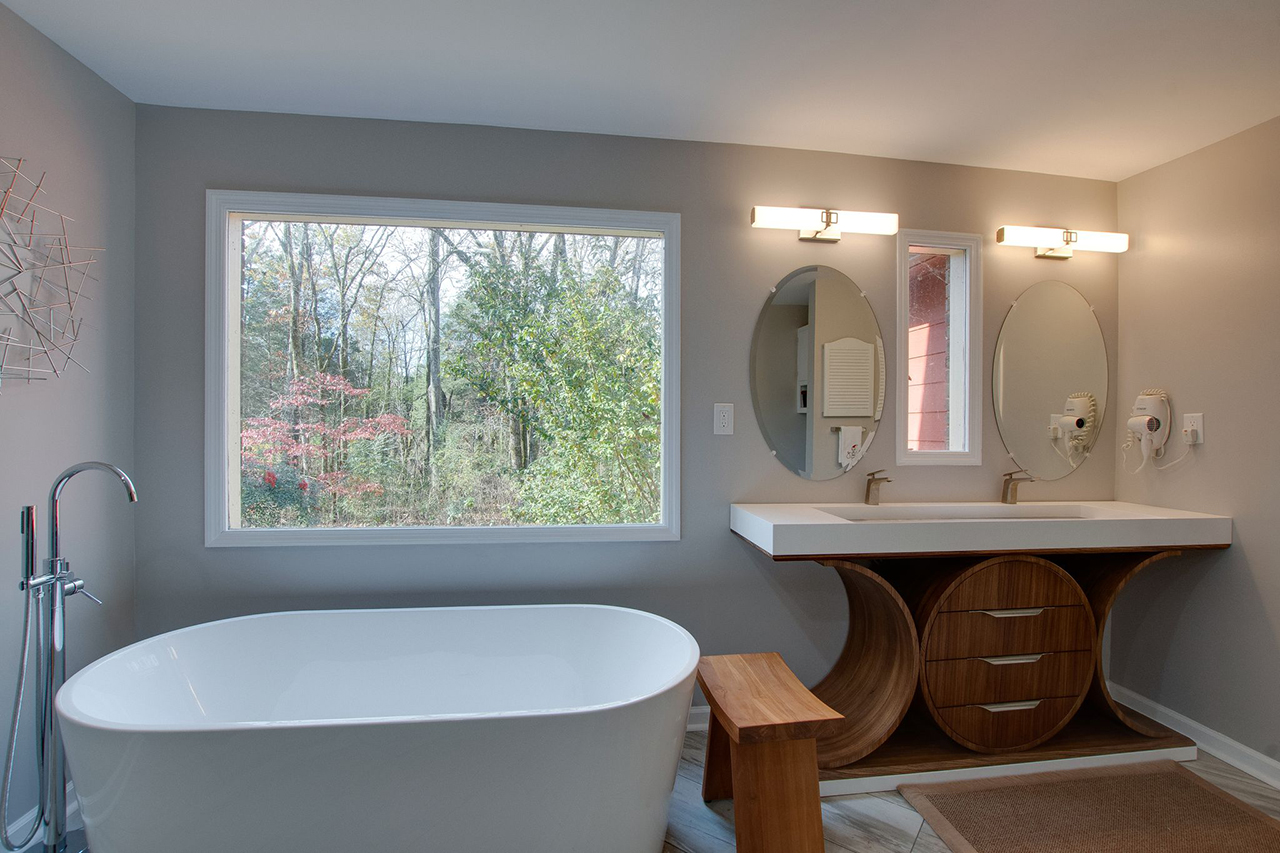 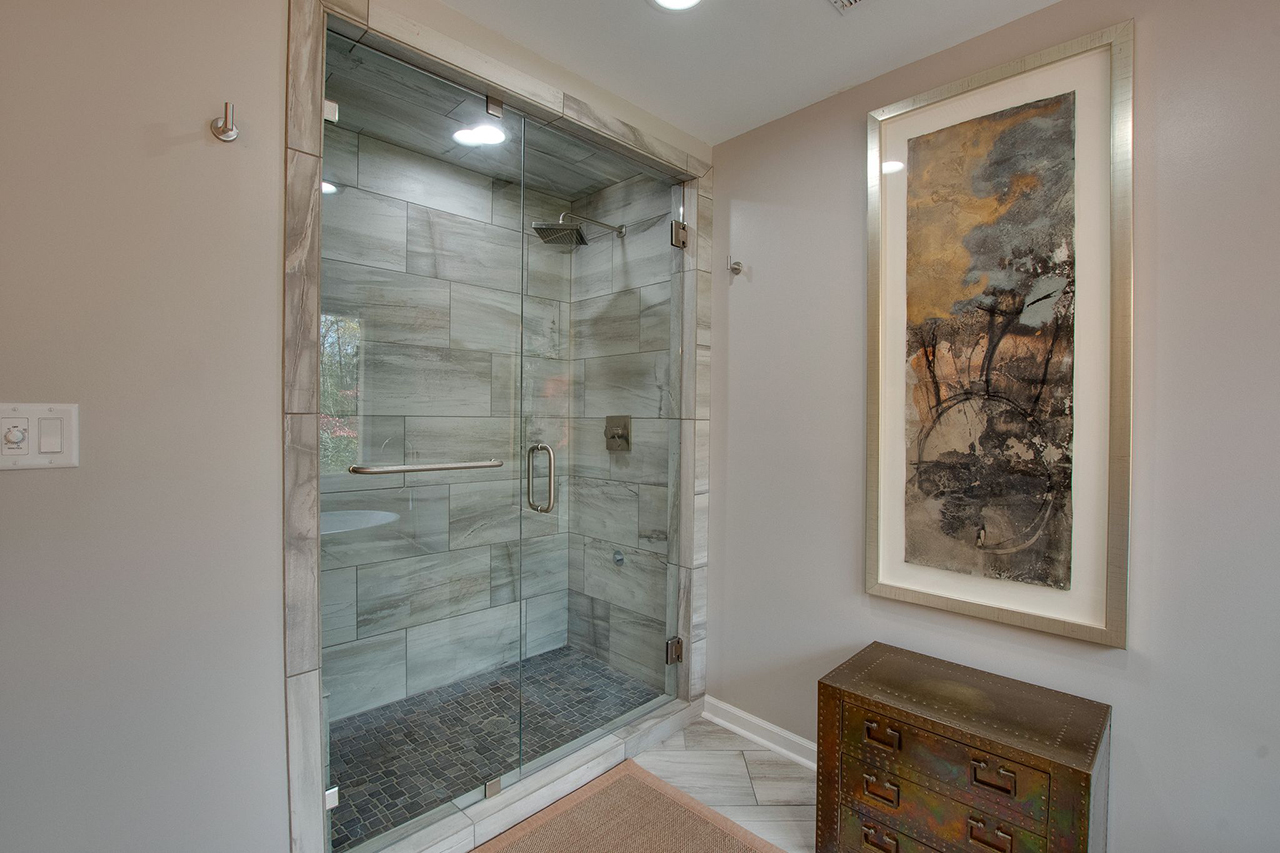 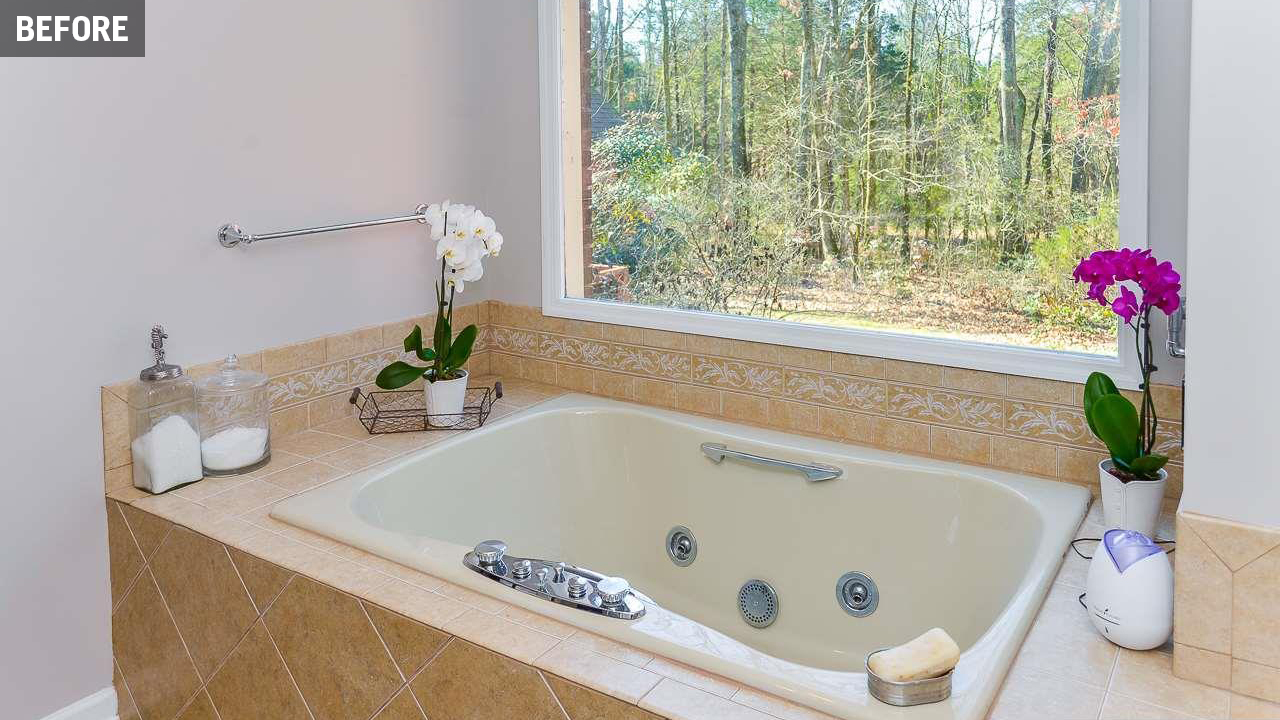 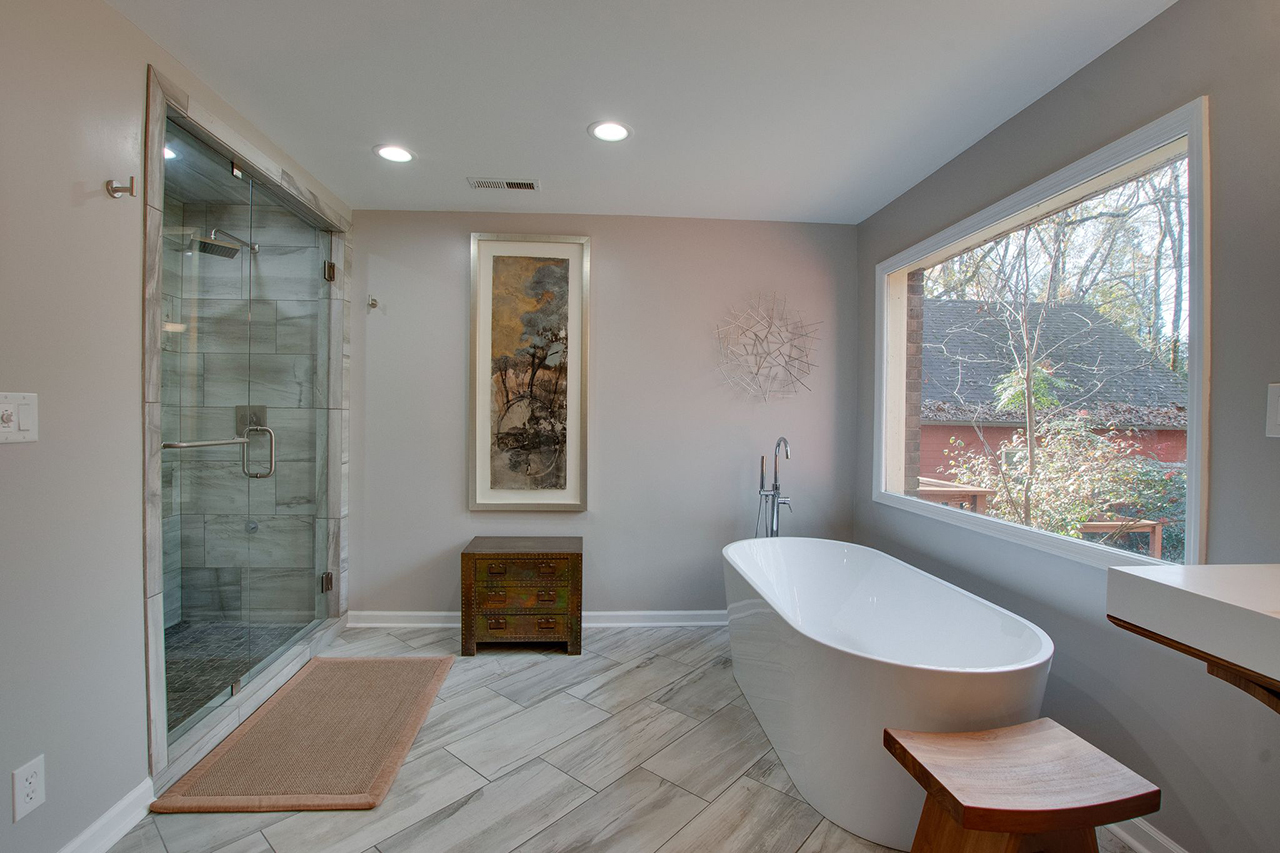 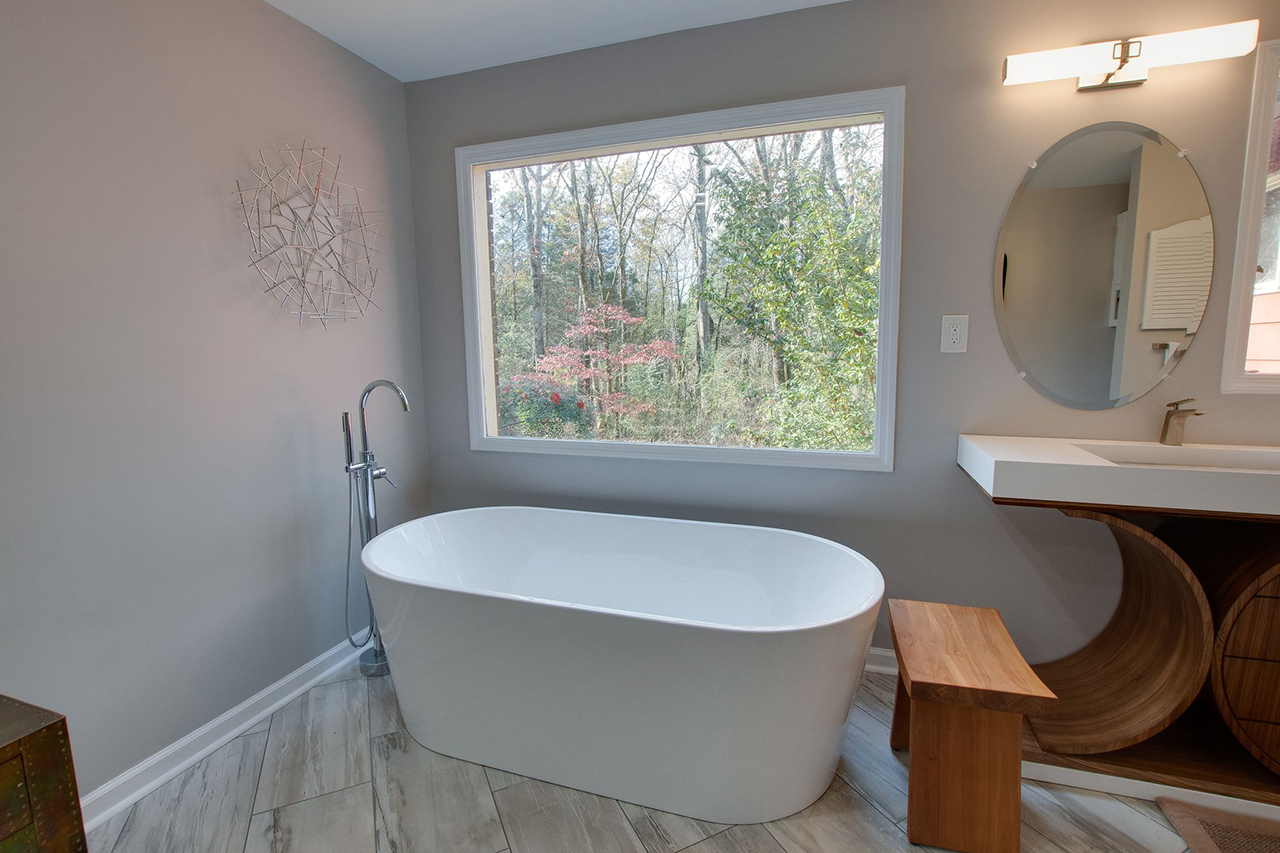 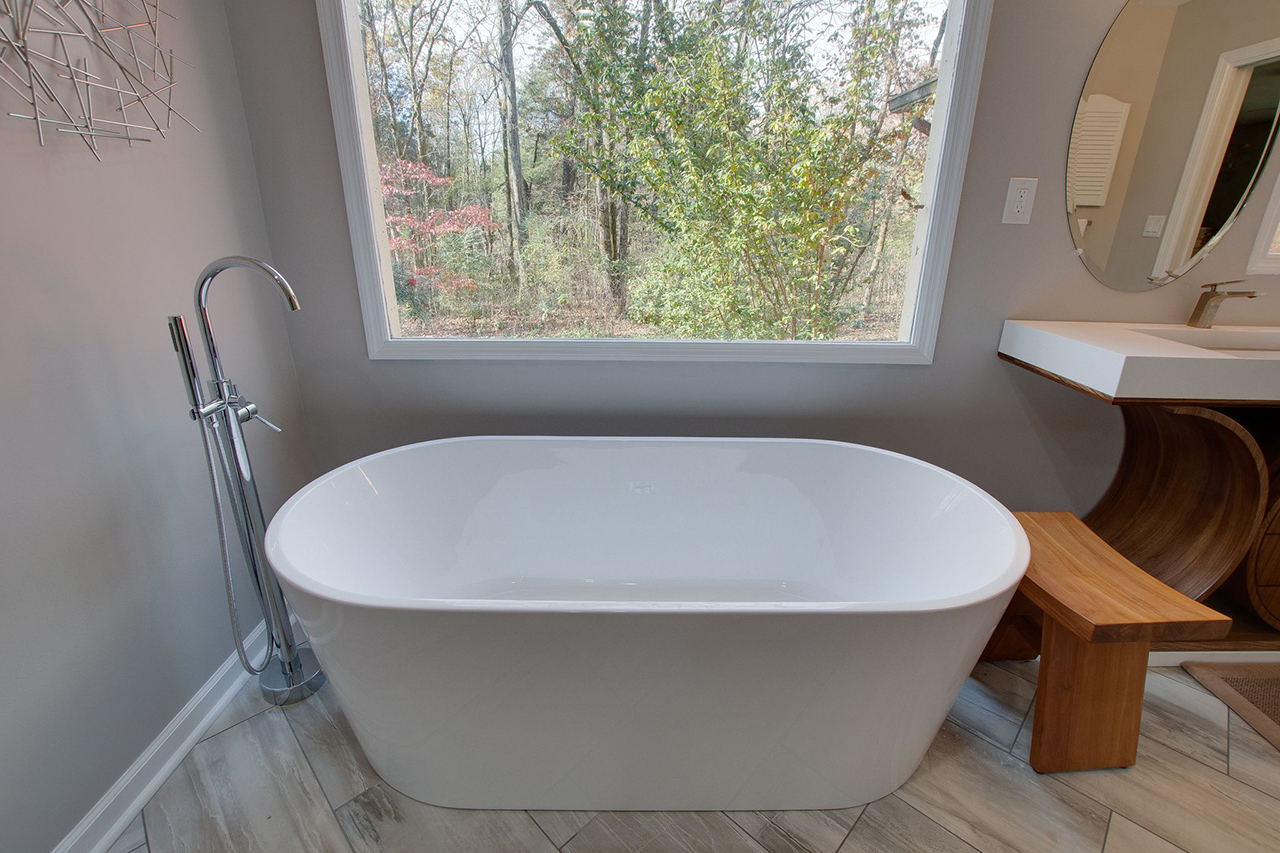 The master bathroom had adequate square footage, but the space was not utilized properly. A cramped shower, bulky tub and a wall that blocked most of the natural light made the bathroom feel dark and smaller than it really was. The objectives of the project were to maximize the existing spaces in the most cost-efficient and practical way possible.

The homeowners’ biggest desire was to make their steam shower usable. The current setup featured a fiberglass enclosure with only 6 feet and 6 inches of head space, so the owners felt like they were in a cave. After demolition, it was discovered that there was plenty of space to go up, but there was an issue of the steam shower generator that was hidden behind the old enclosure, and where to locate it to make the shower work.

After some planning, it was decided to relocate the steam shower generator in the adjacent laundry room that was behind the master bathroom. Now, the generator that was hidden is easily accessible for maintenance and in moving the unit, the owners gained almost 6 inches of additional floor space for the shower.

The new bathroom took full advantage of the large picture window and, with the wall removed, the whole bathroom was filled with natural light. A custom vanity and tile on a diagonal really helped to maximize the space and tied everything in together.