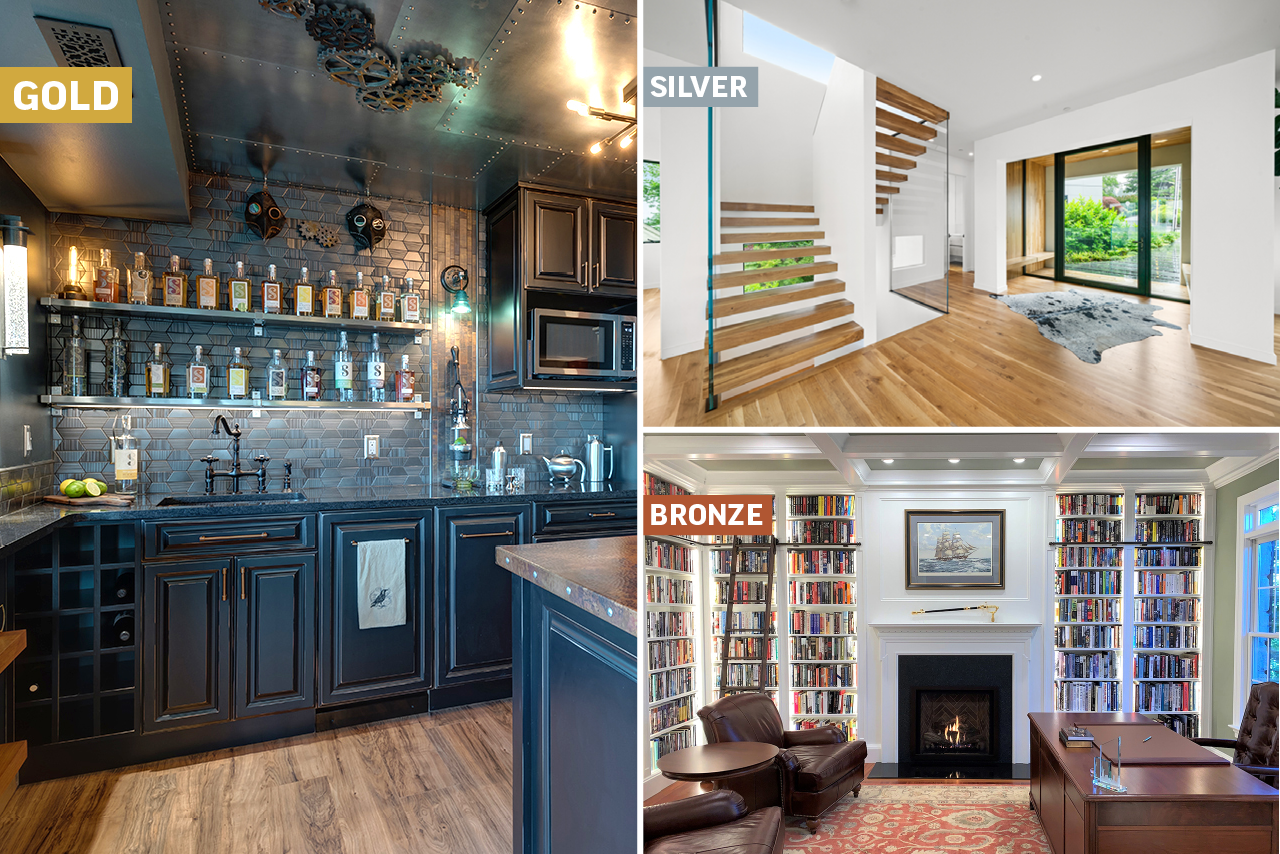 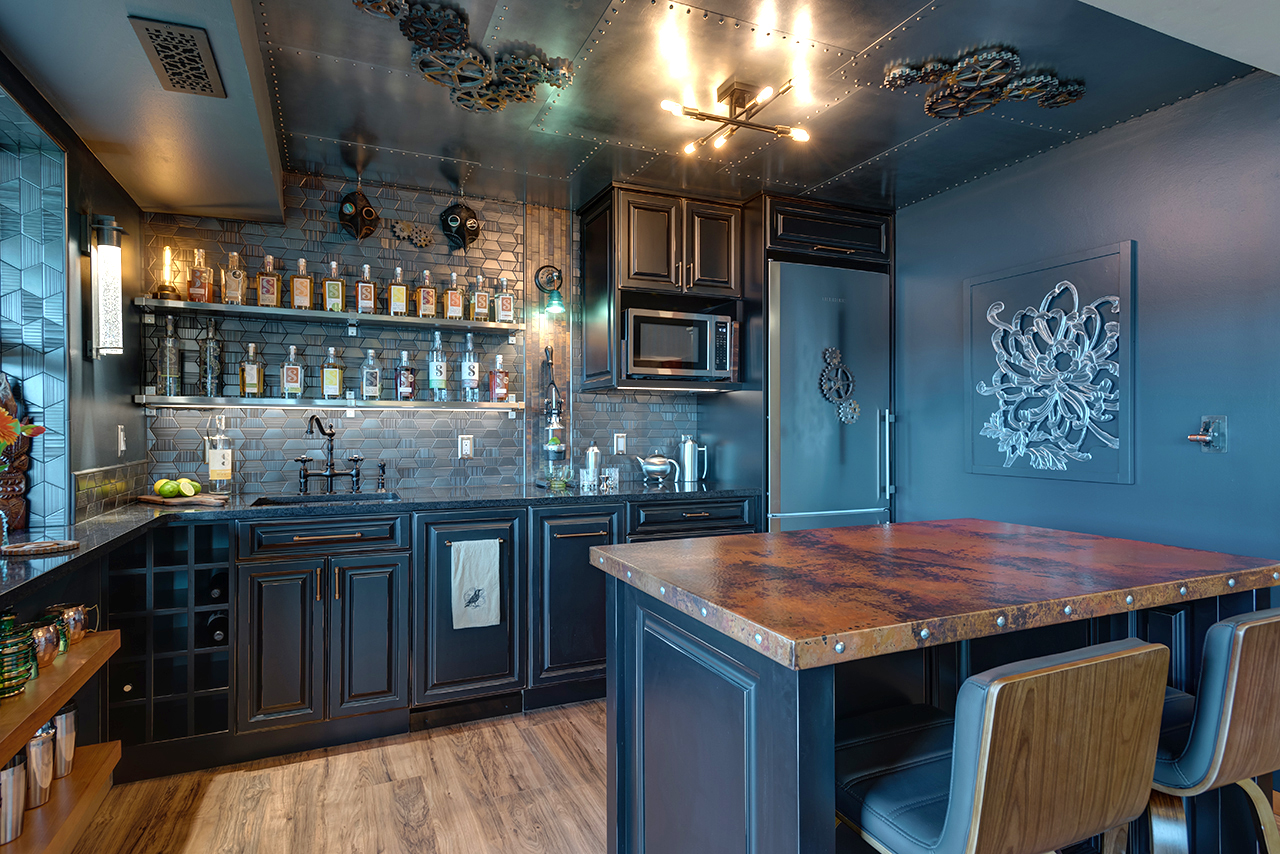 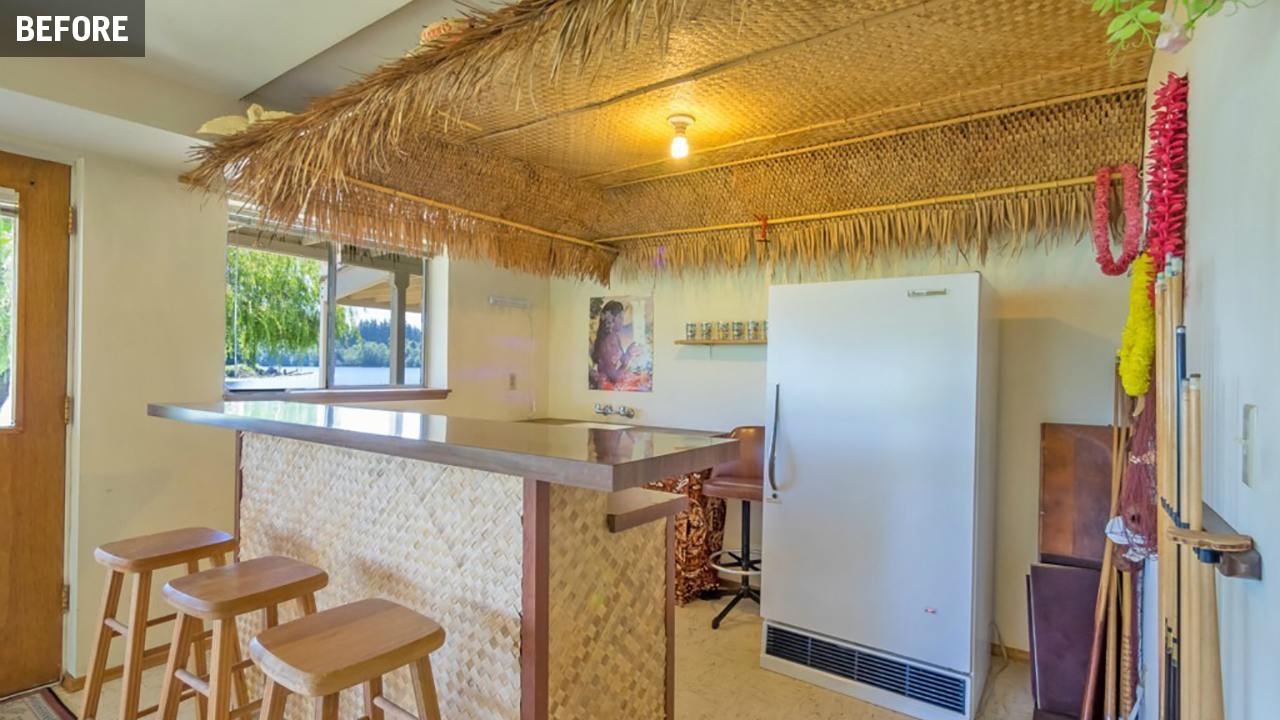 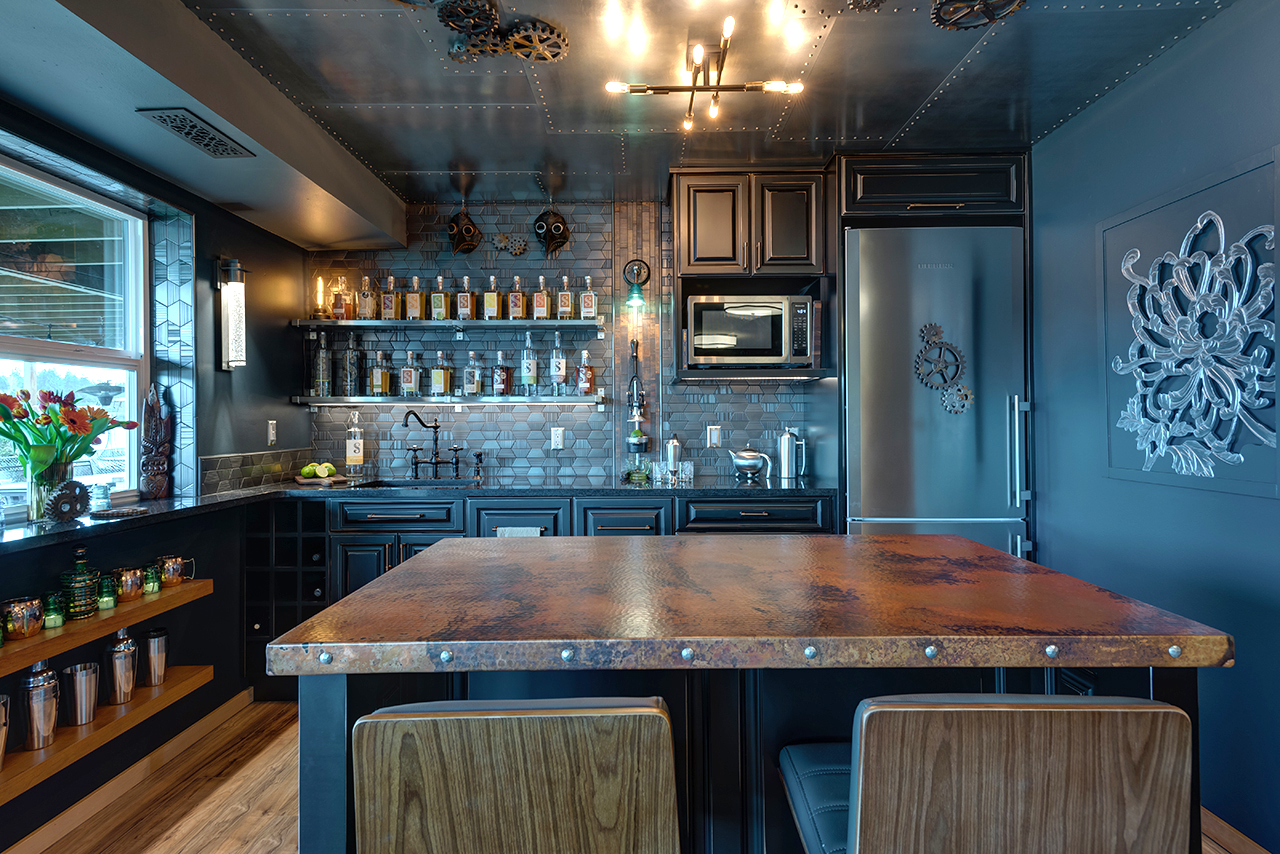 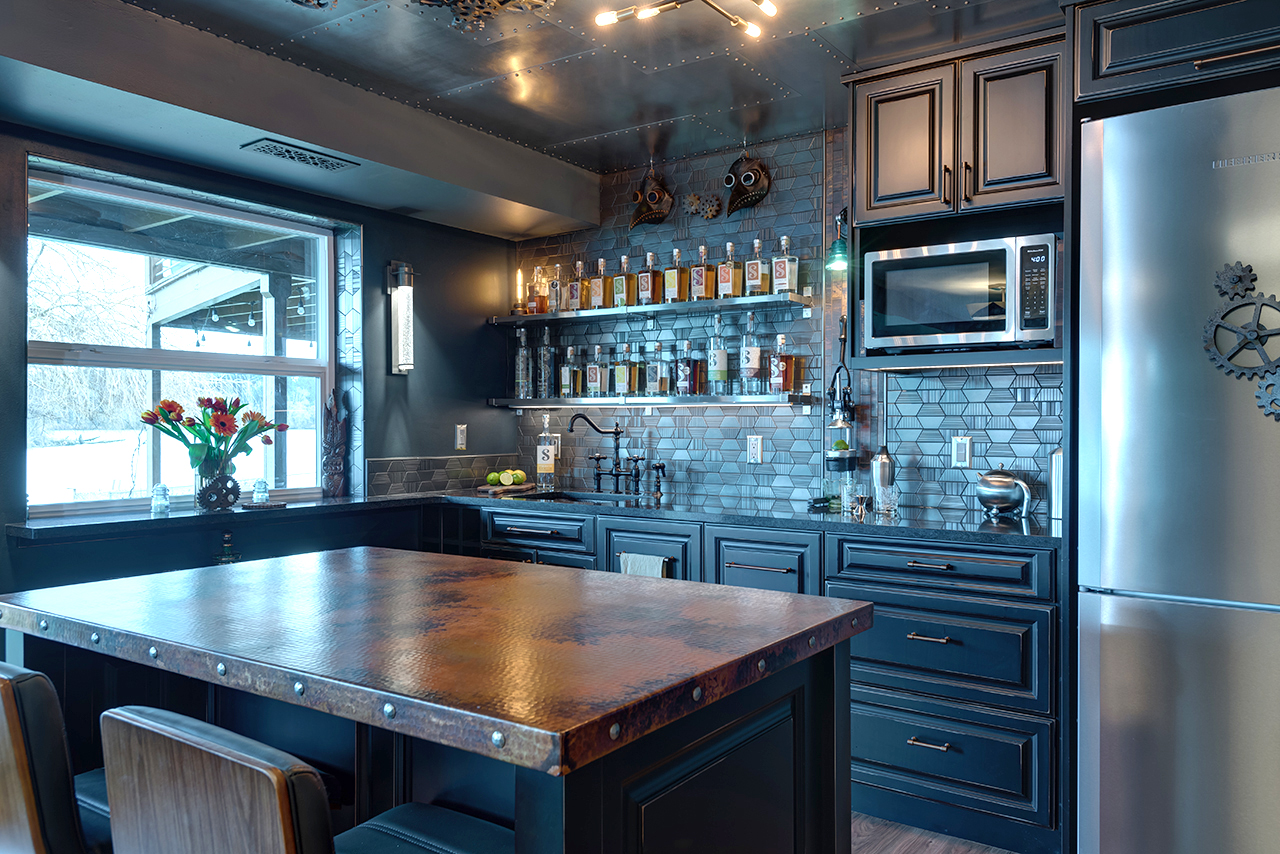 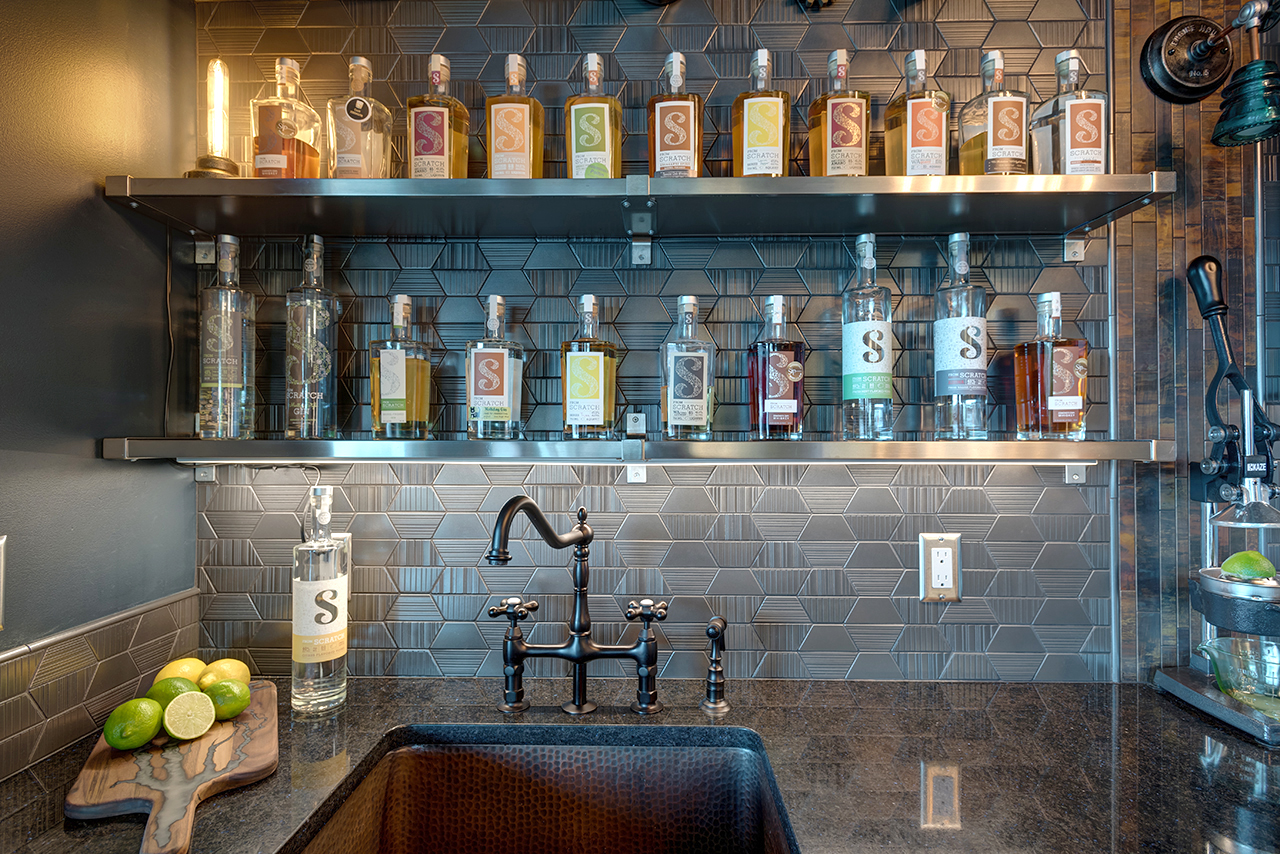 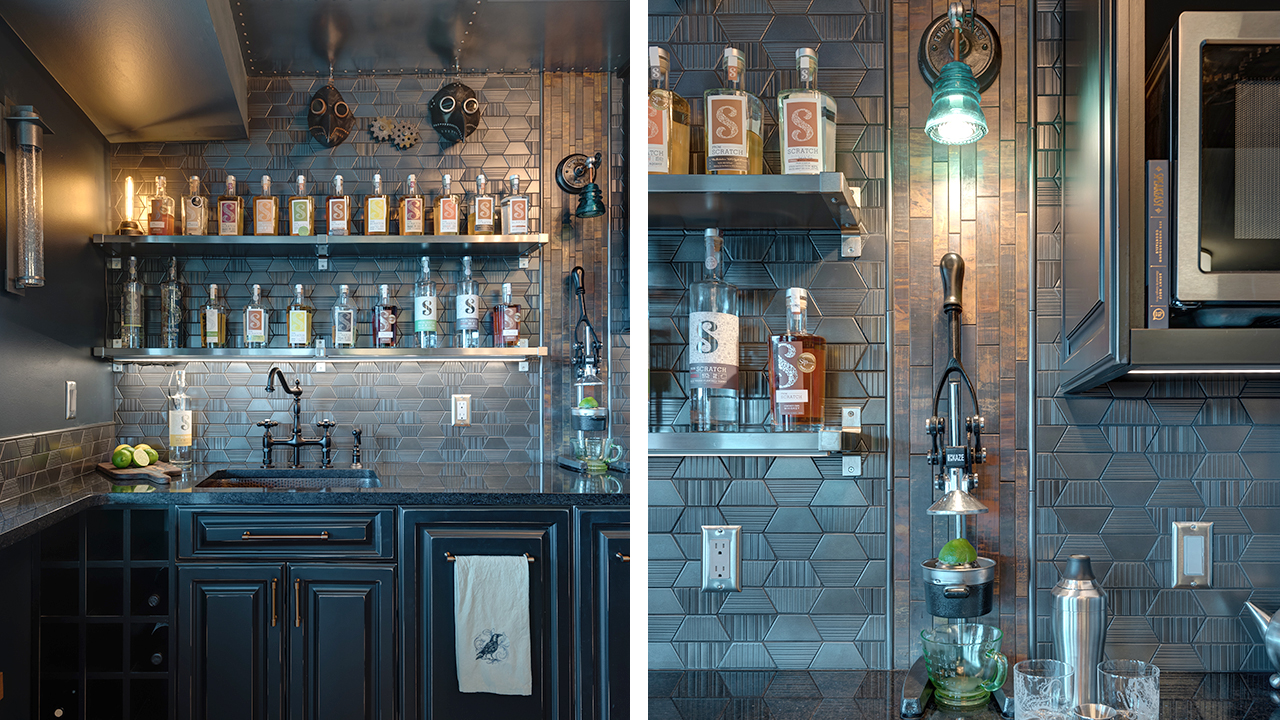 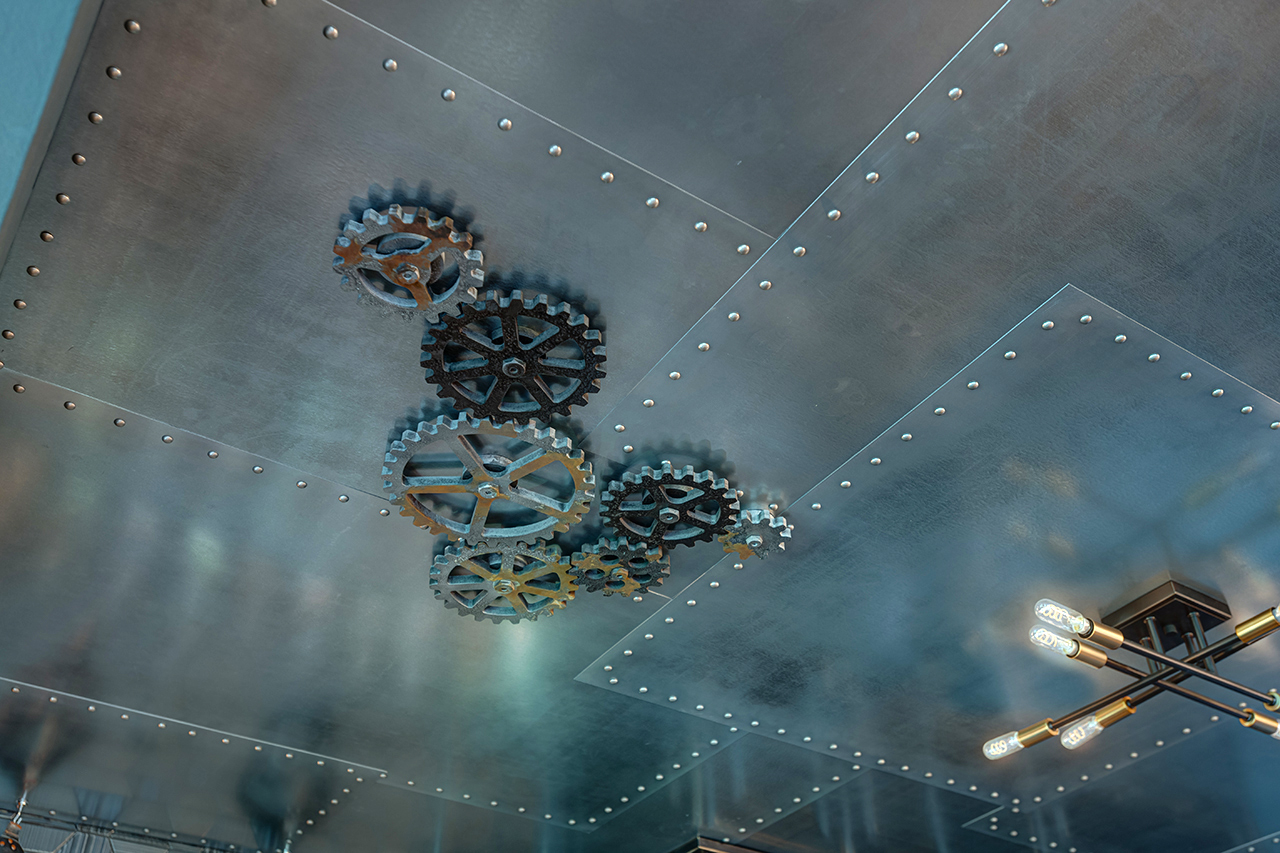 The homeowners had an expansive daylight-basement family room with a bar area and exterior access, but they wanted something with a bit more pizzazz—a cocktail bar that would make a memorable impression on their guests. Locating materials based on the clients’ style and their desired steam-punk theme within the planned construction budget quickly became a challenge.

Their design request was “steampunk speakeasy, but with a nod to the atomic ‘60s,” with a goal of creating an eye-catching entertainment space that would not be too out of line with their mid- century modern design in the rest of the house. The result is a fun bar with a mix of metals and patterns, some mad-scientist inspired lighting fixtures, and a truly unique riveted-metal ceiling. 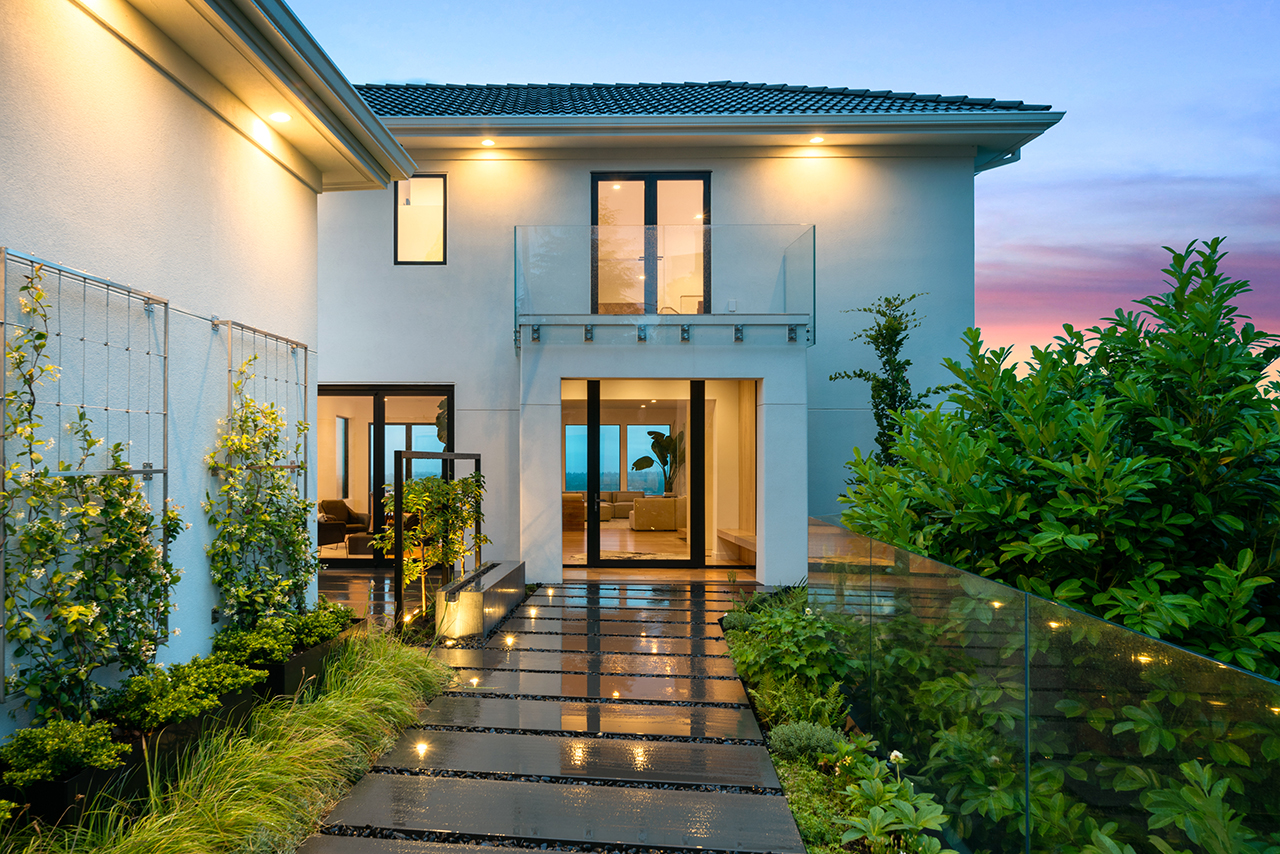 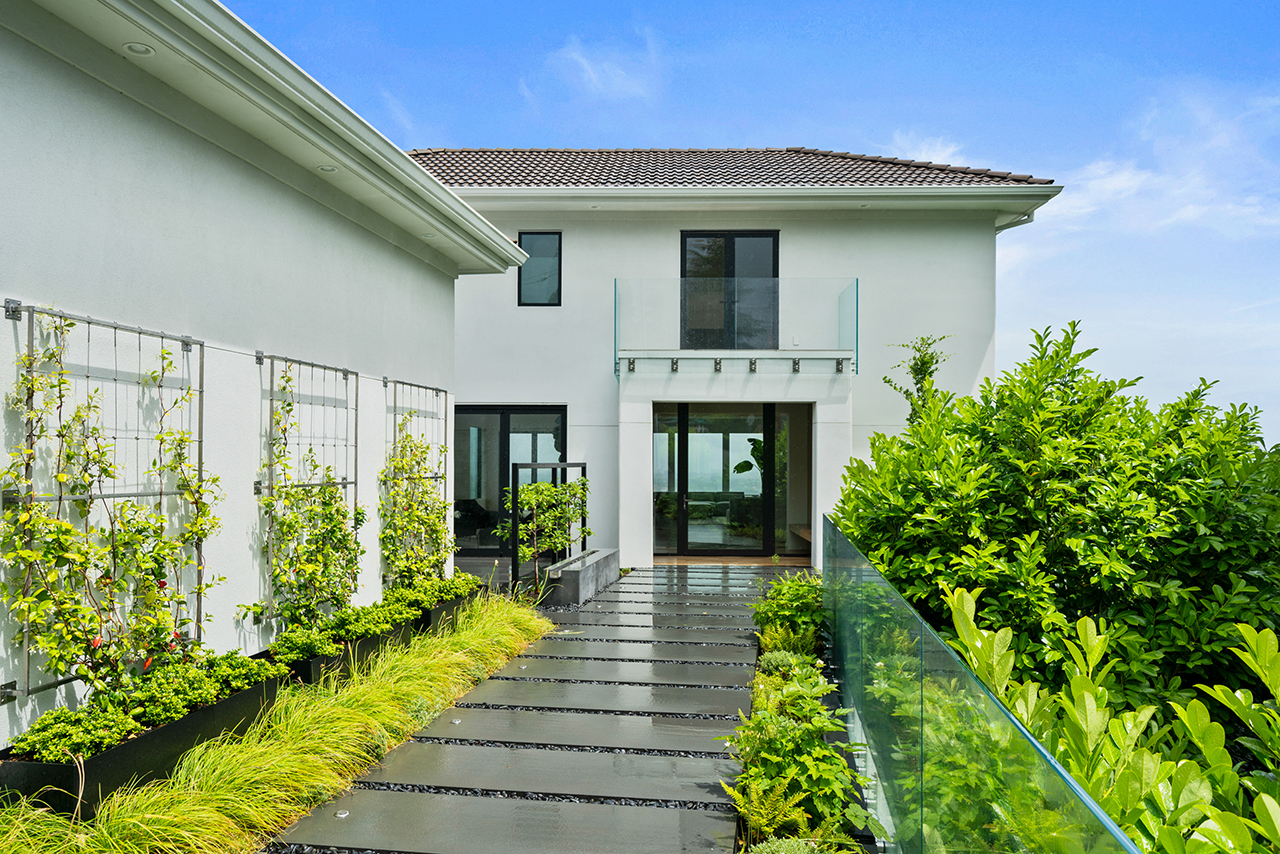 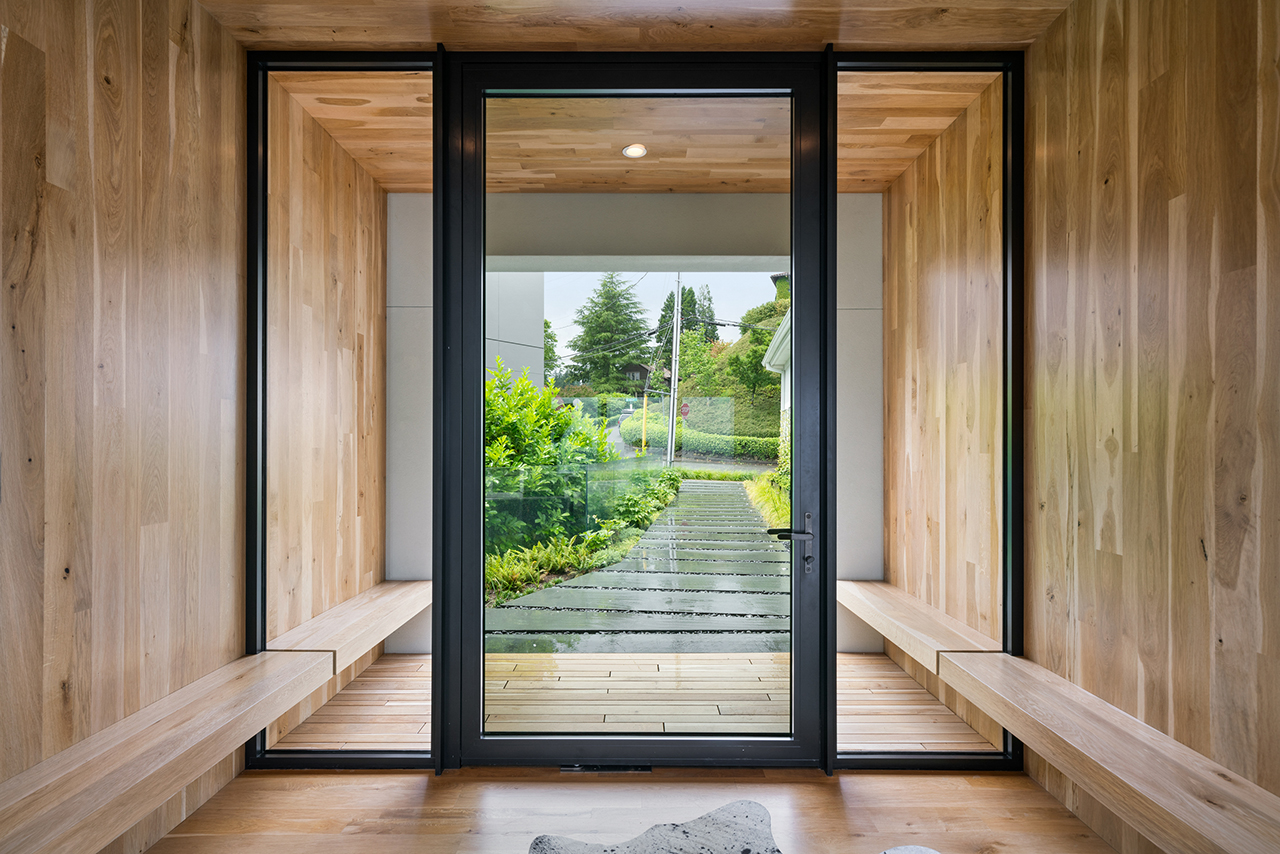 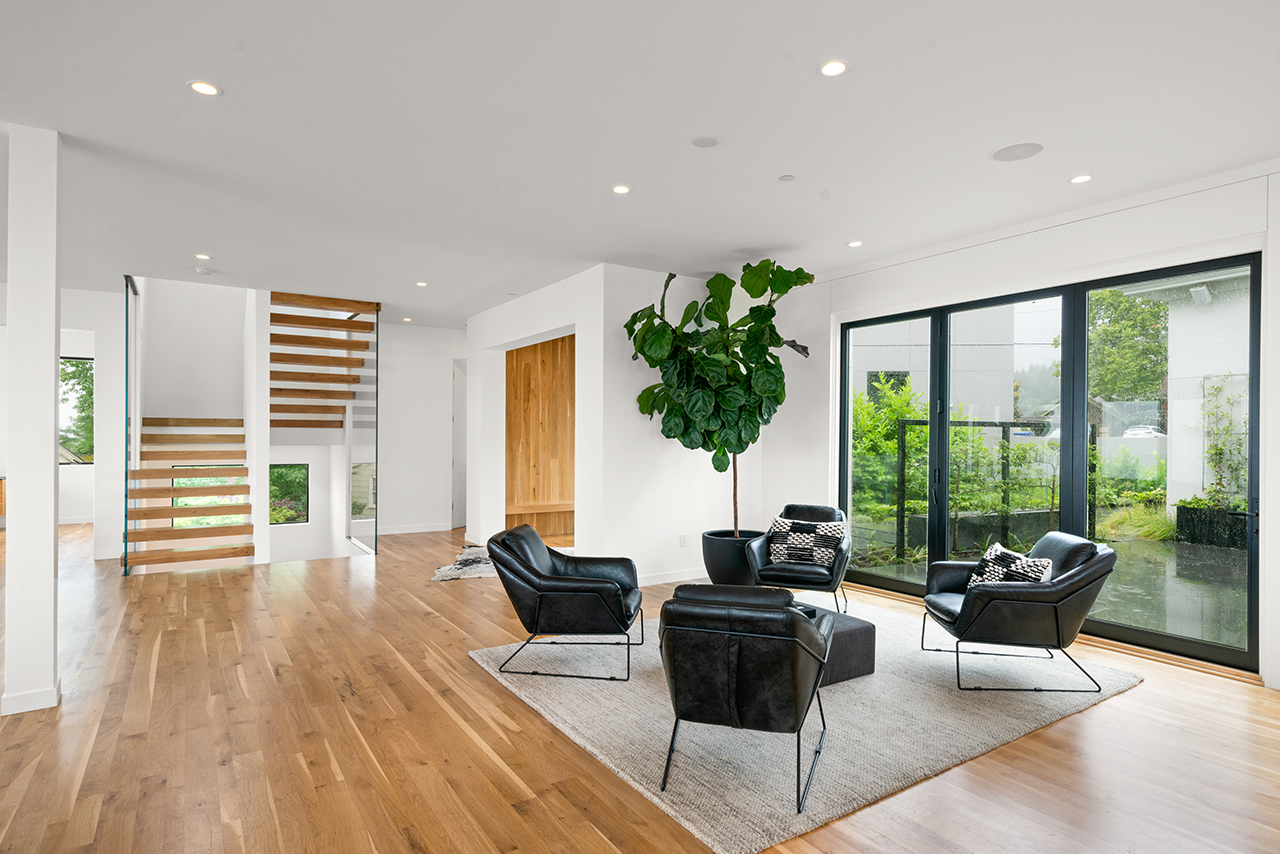 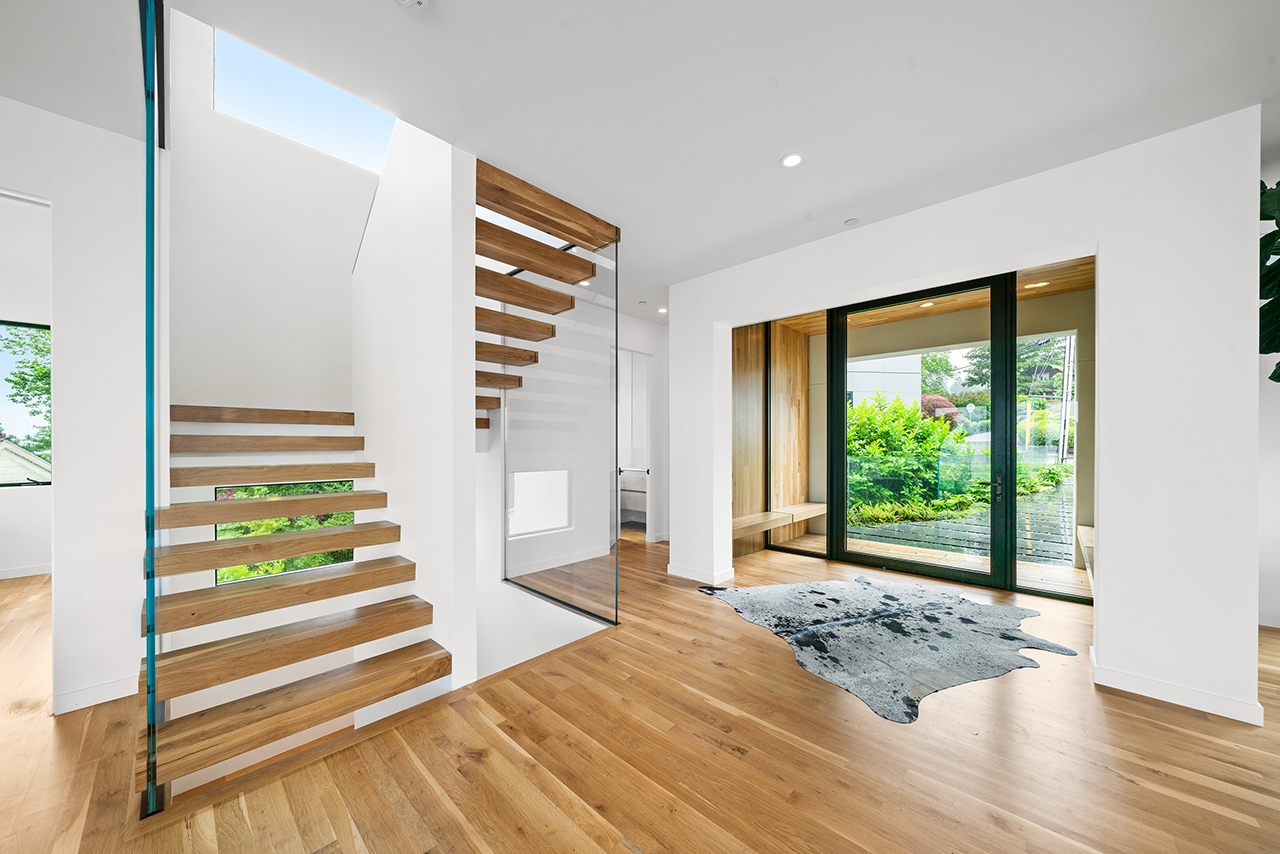 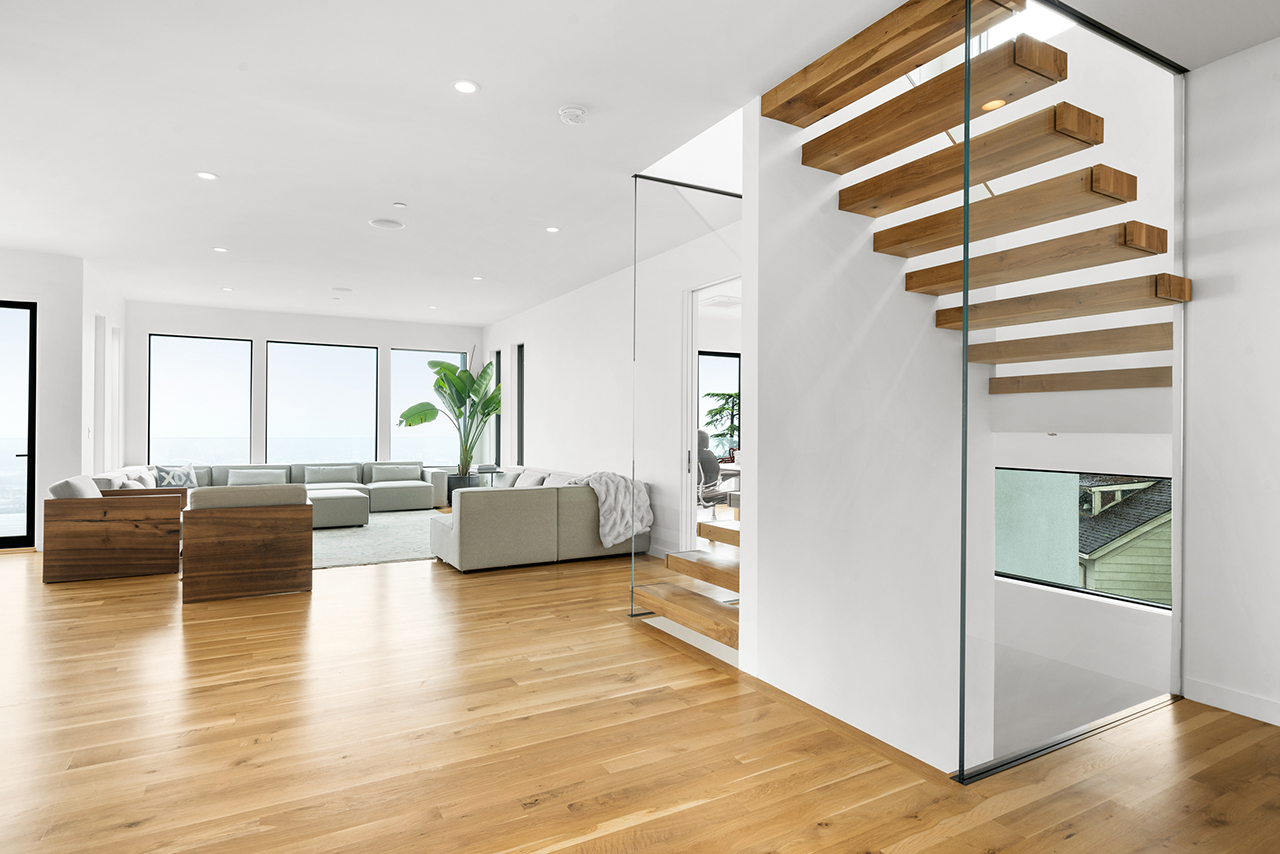 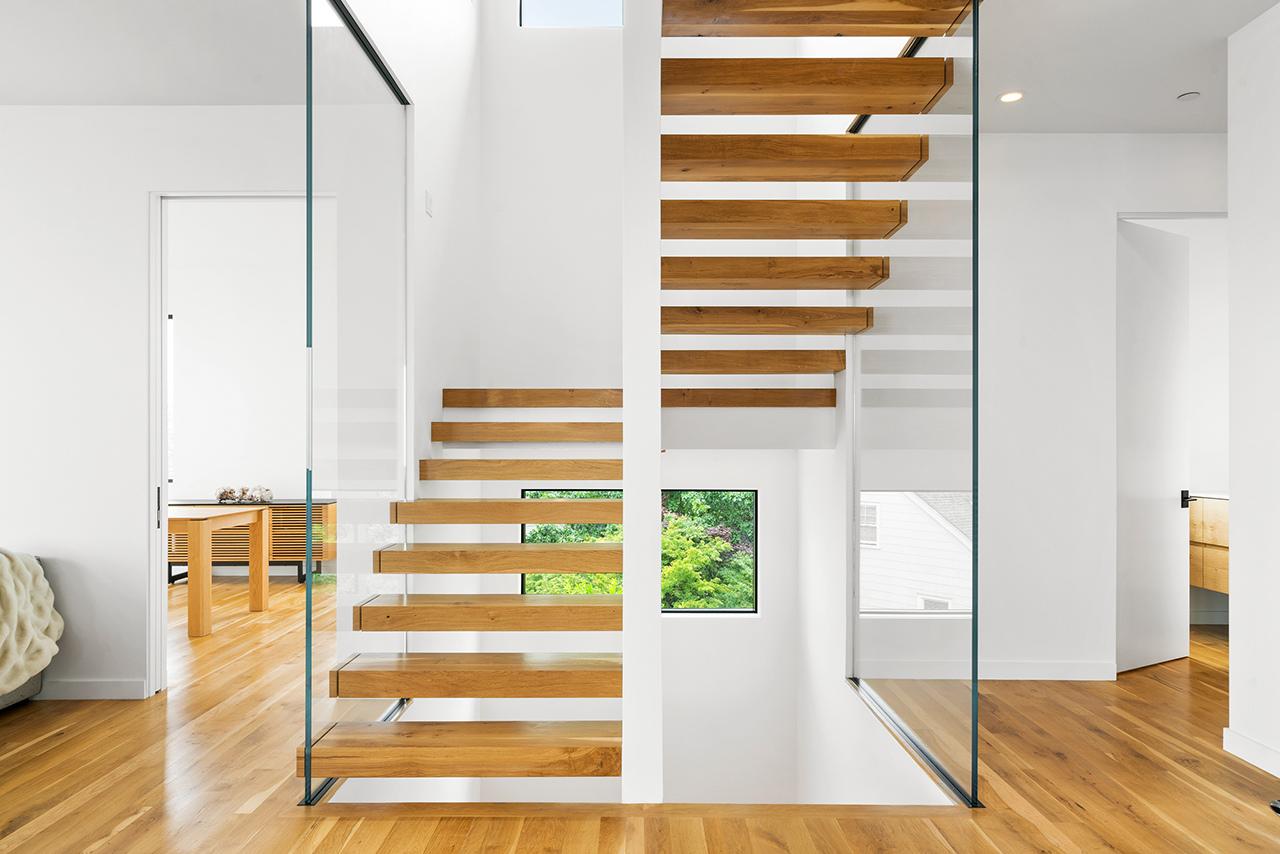 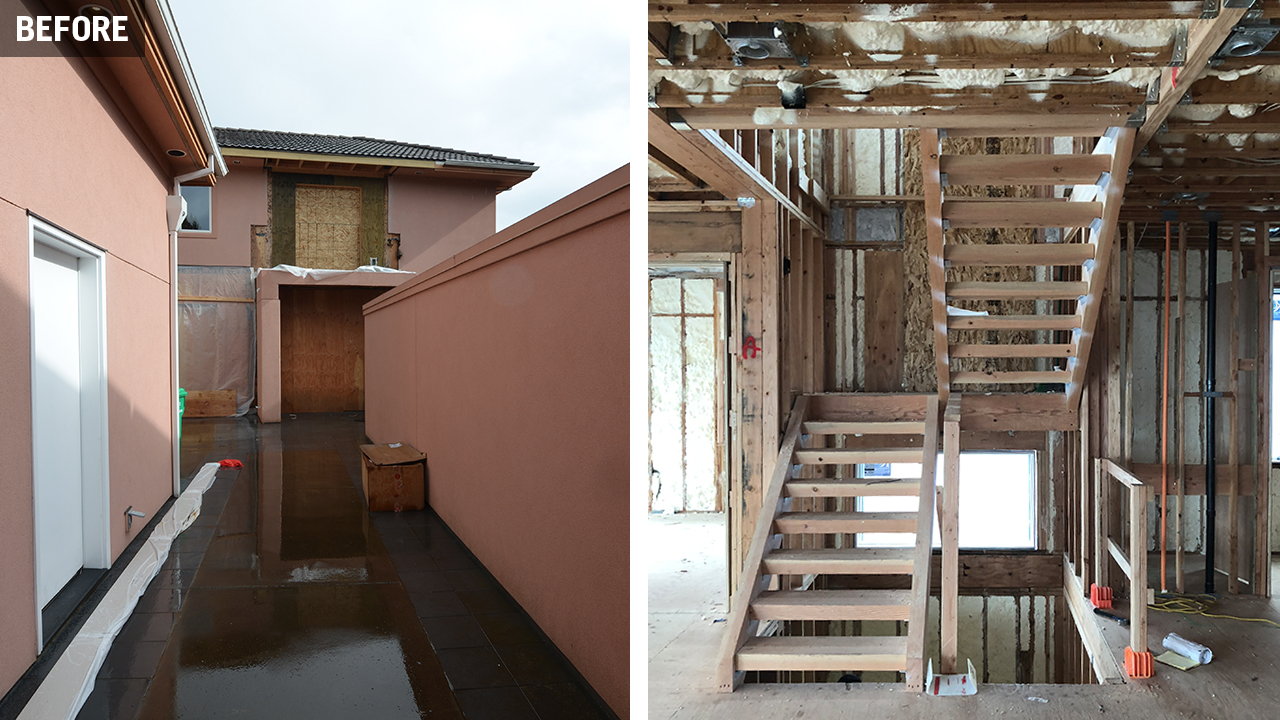 The homeowner was looking for a unique, architectural stair on the main level of the home that went up to the upper-level primary suite and could be seen from the great room. The company designed a floating wood tread stair that is supported by glass on two sides and a center plaster wall.

Engineering glass to support gravity loads of the stair treads was a unique challenge for the structural engineer, and special computer software was used to calculate the loads and specify the glass type. The glass is two layers of 5/16-inch laminated glass with a 0.06-inch SentryGlas layer in between for added strength.

Installation of the stair was the last piece of construction within a whole-house remodel, so handling of the 9.5-foot tall, floor-to-ceiling glass panels at the end of a remodel project was delicately done. The team designed the wood tread to appear to be penetrating the glass with some of the wood tread revealed on the outside faces of the glass.

To limit the holes drilled through the glass, the tread maker fabricated a tread cap with recessed magnets that secured the wood cap in place, magnetizing to the bolt heads used to support the tread in the glass. 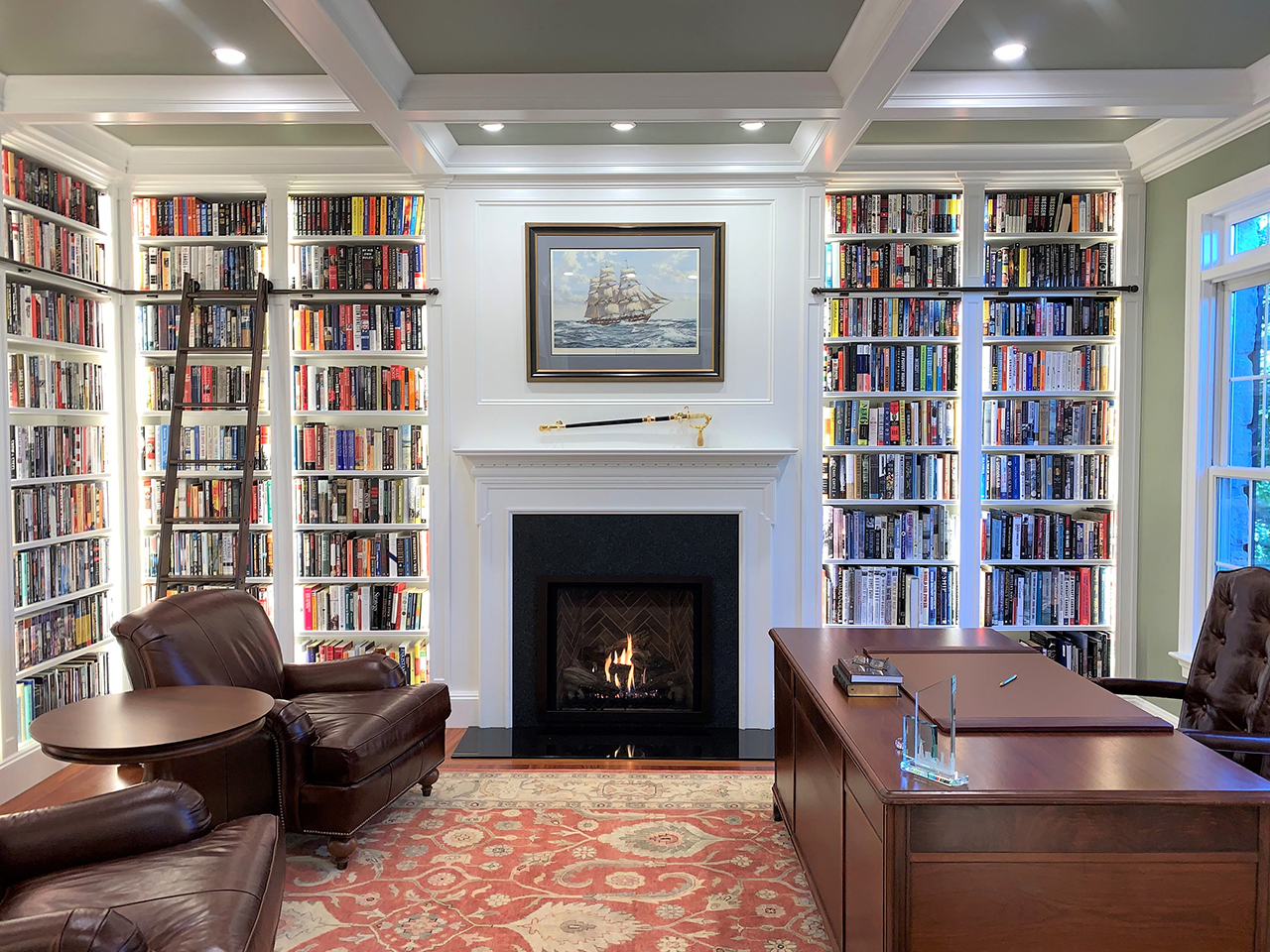 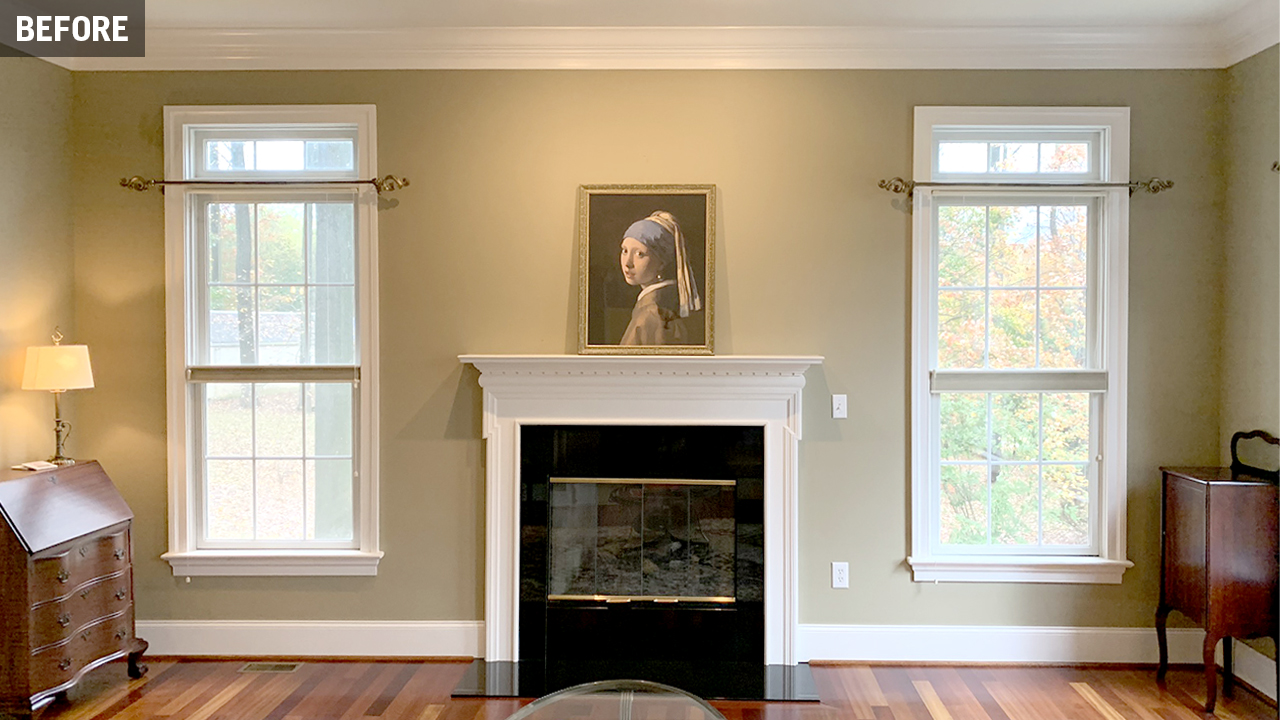 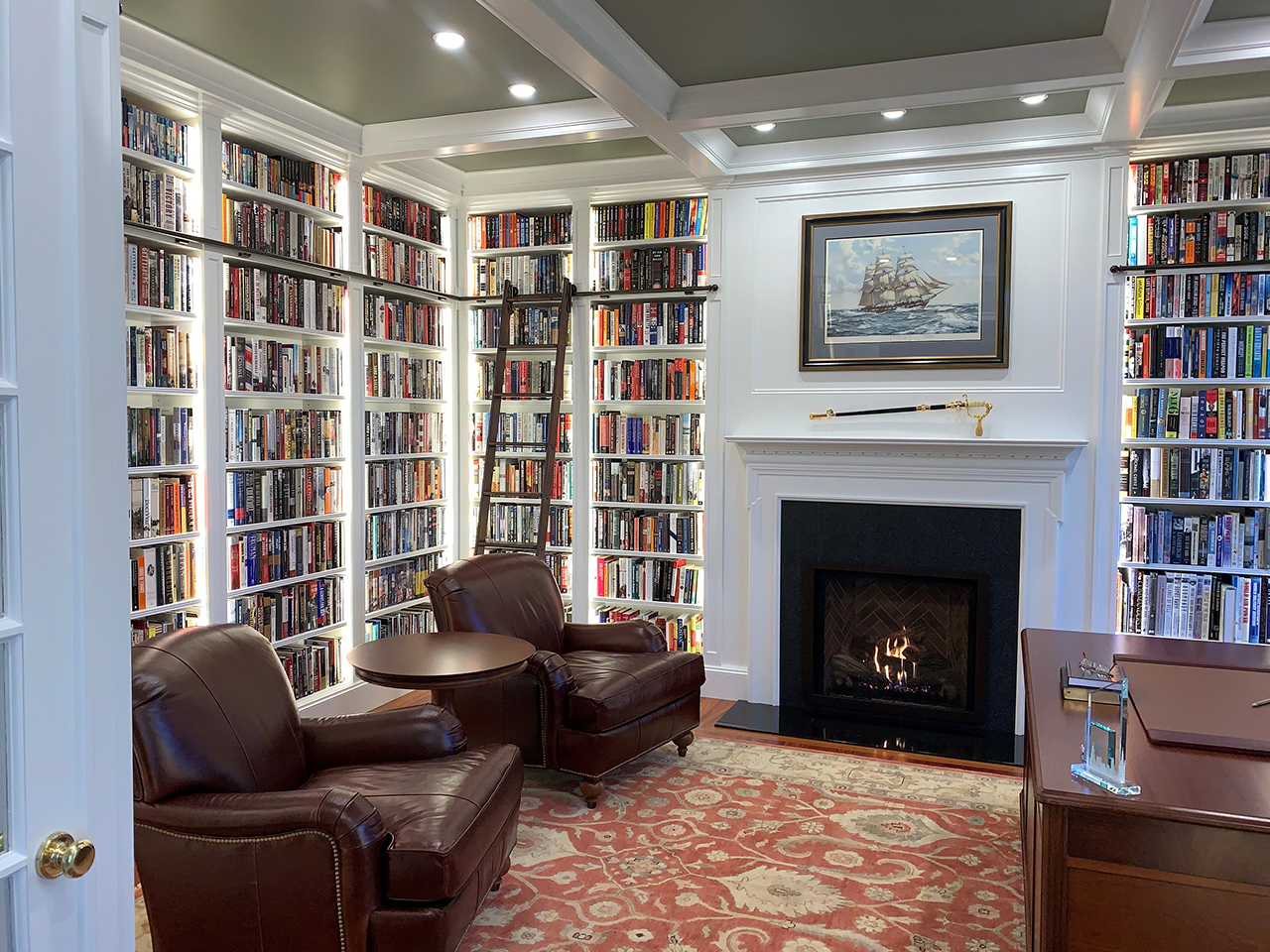 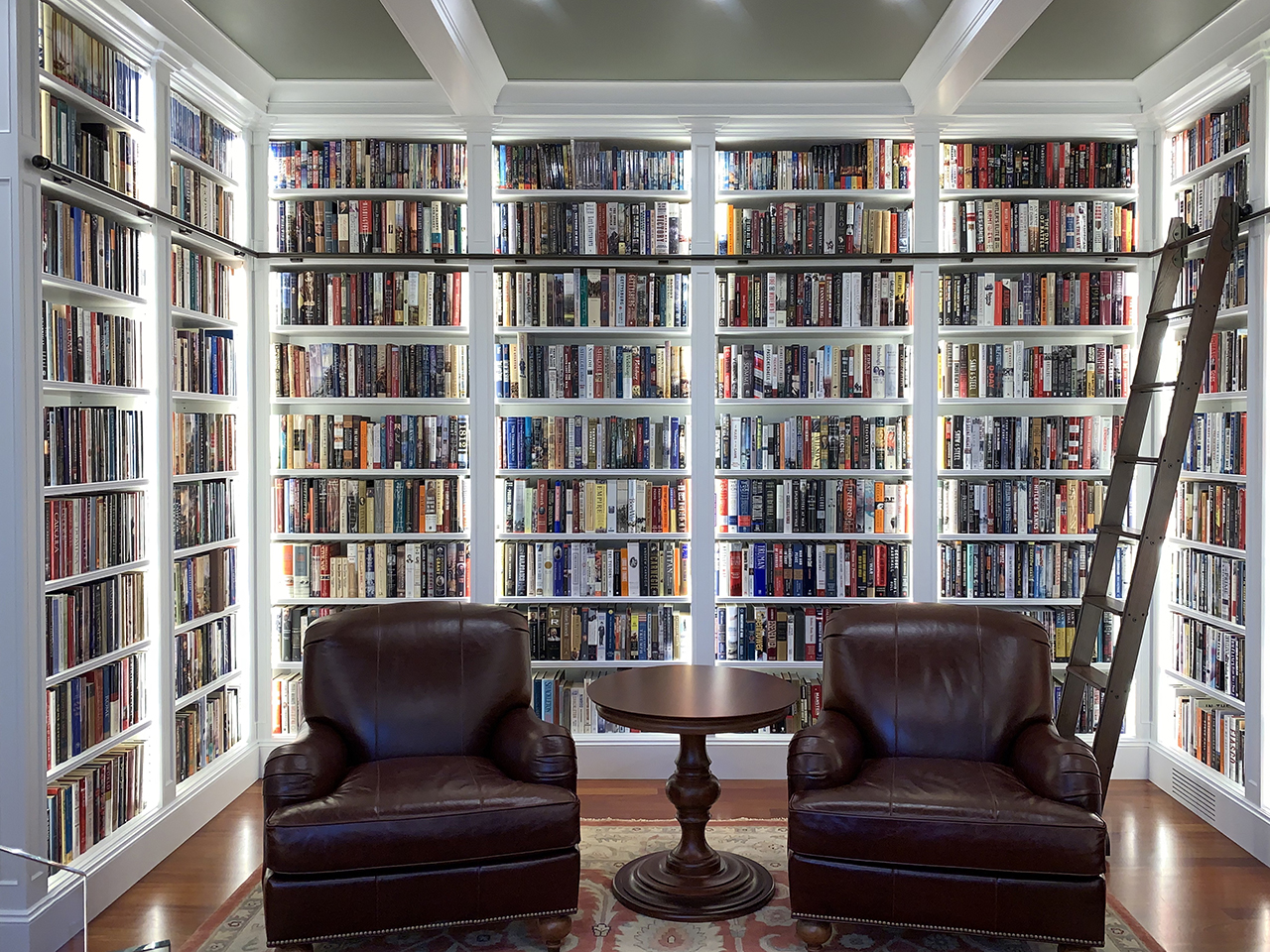 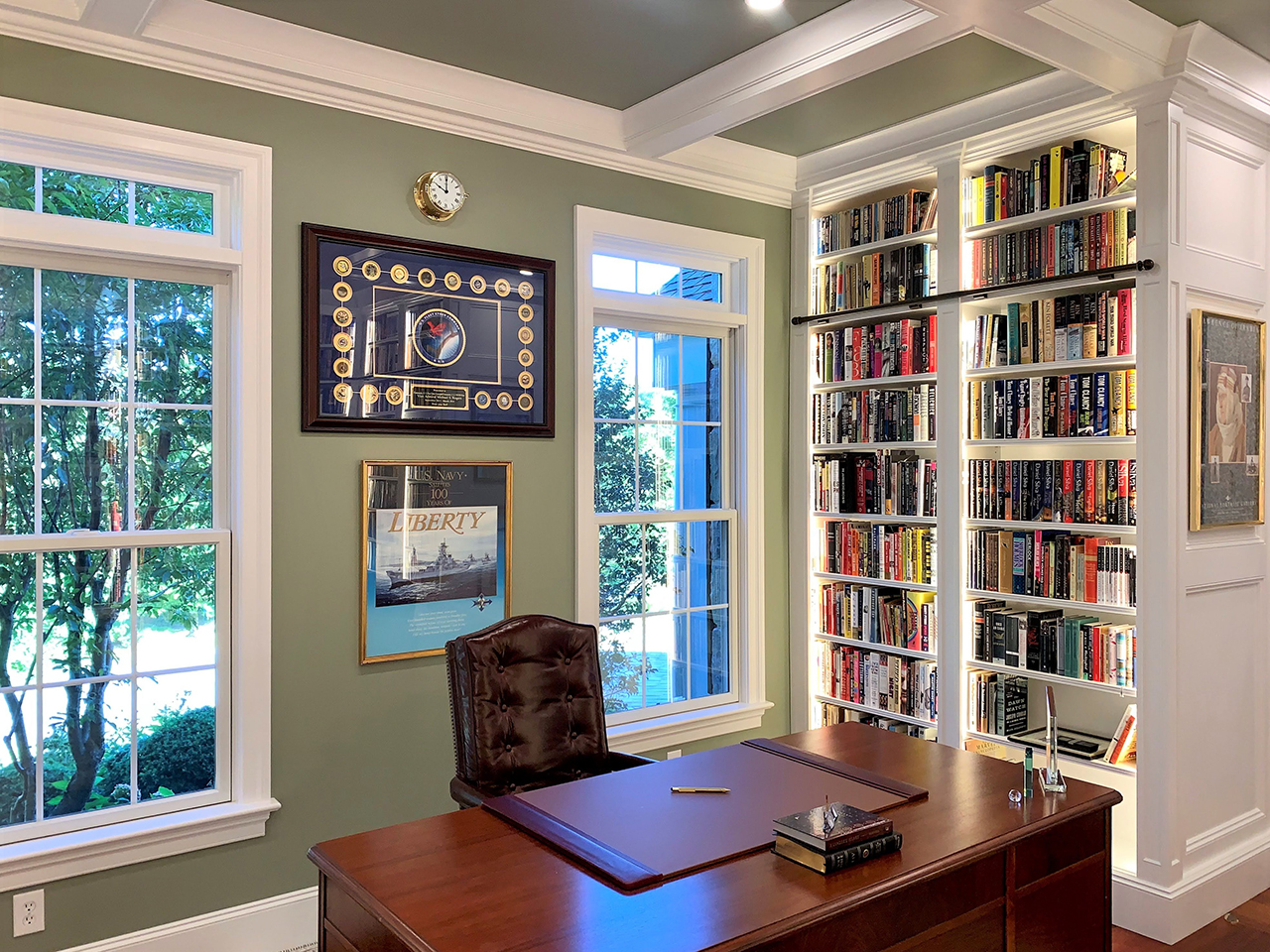 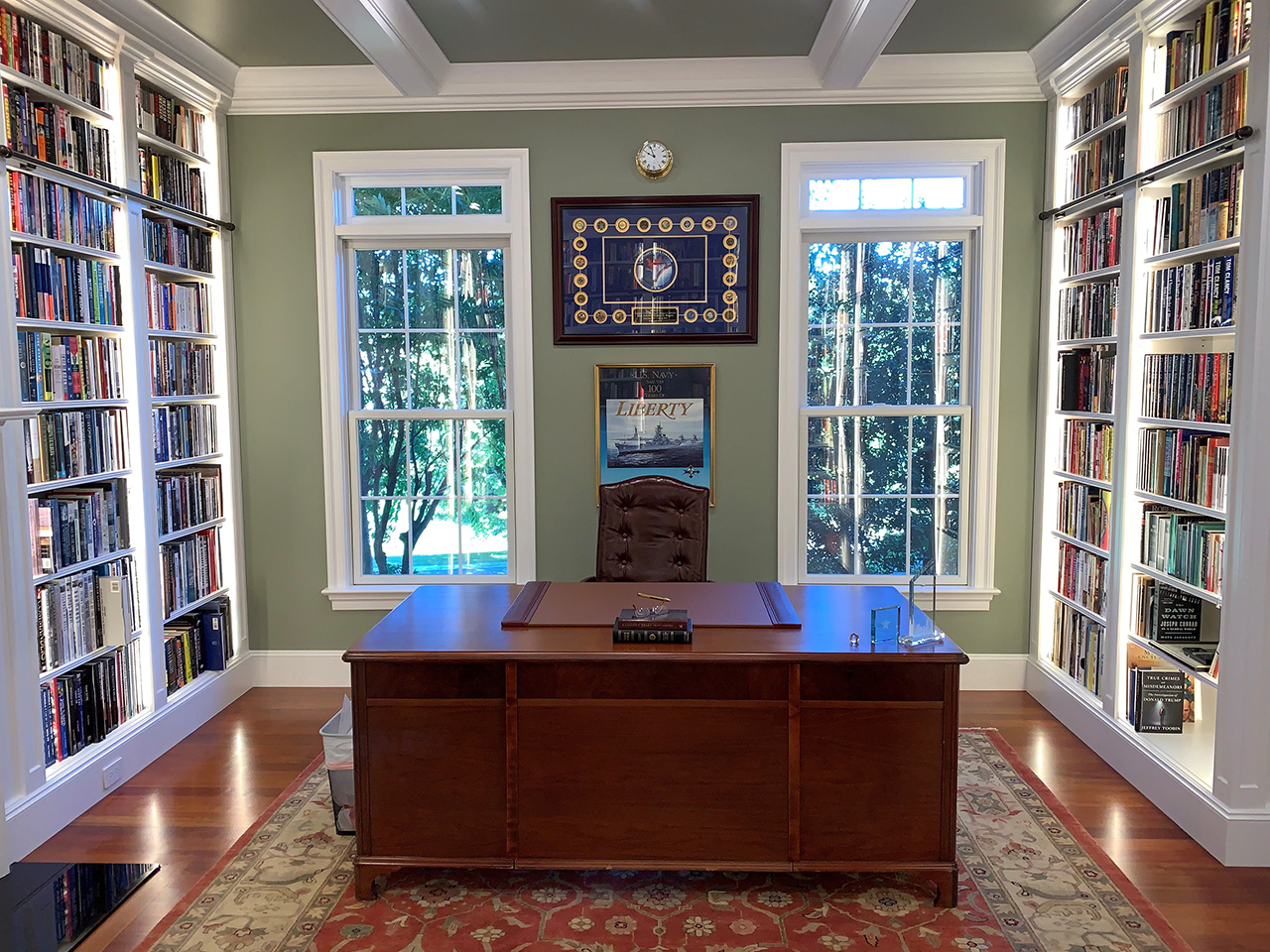 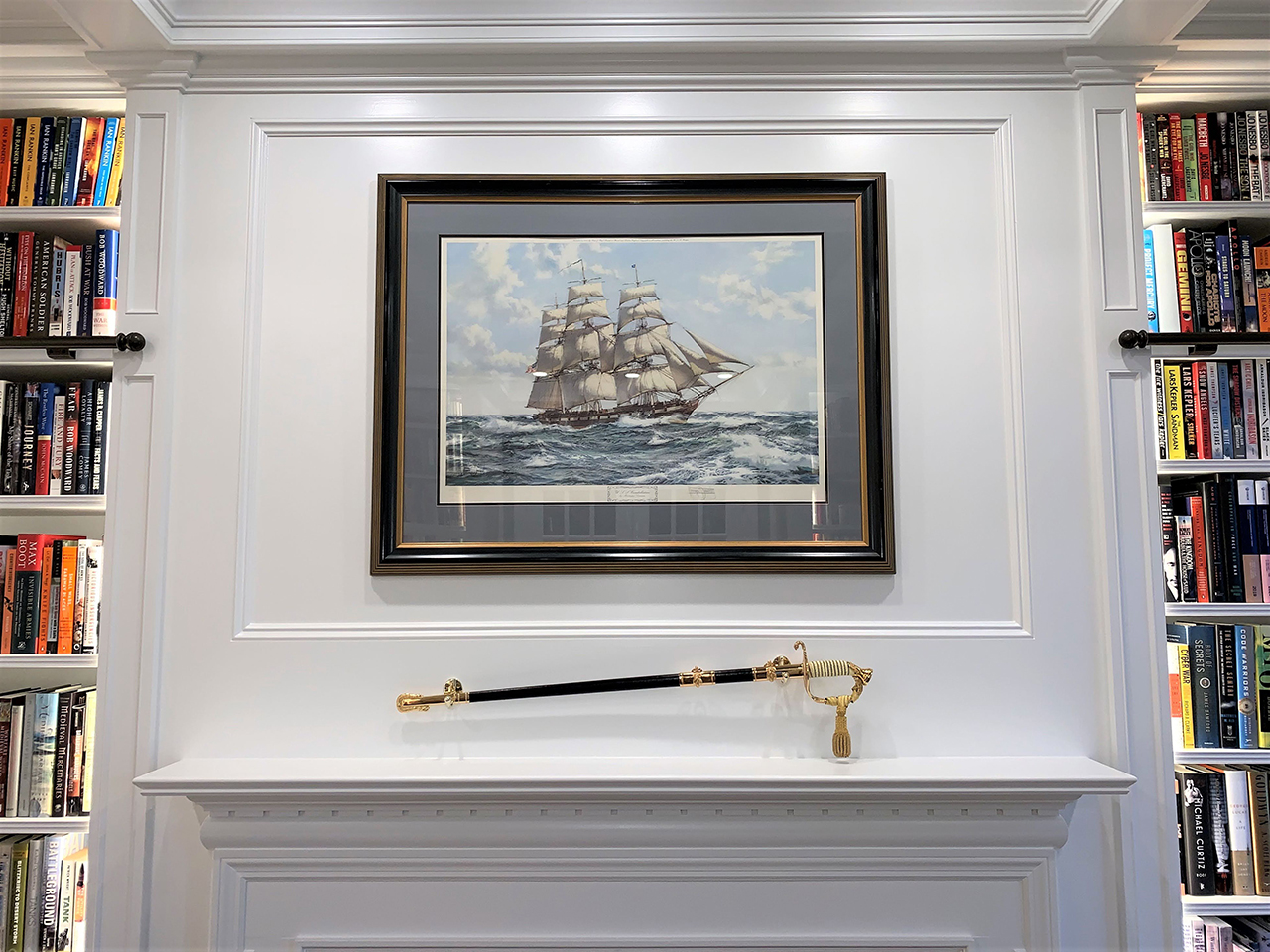 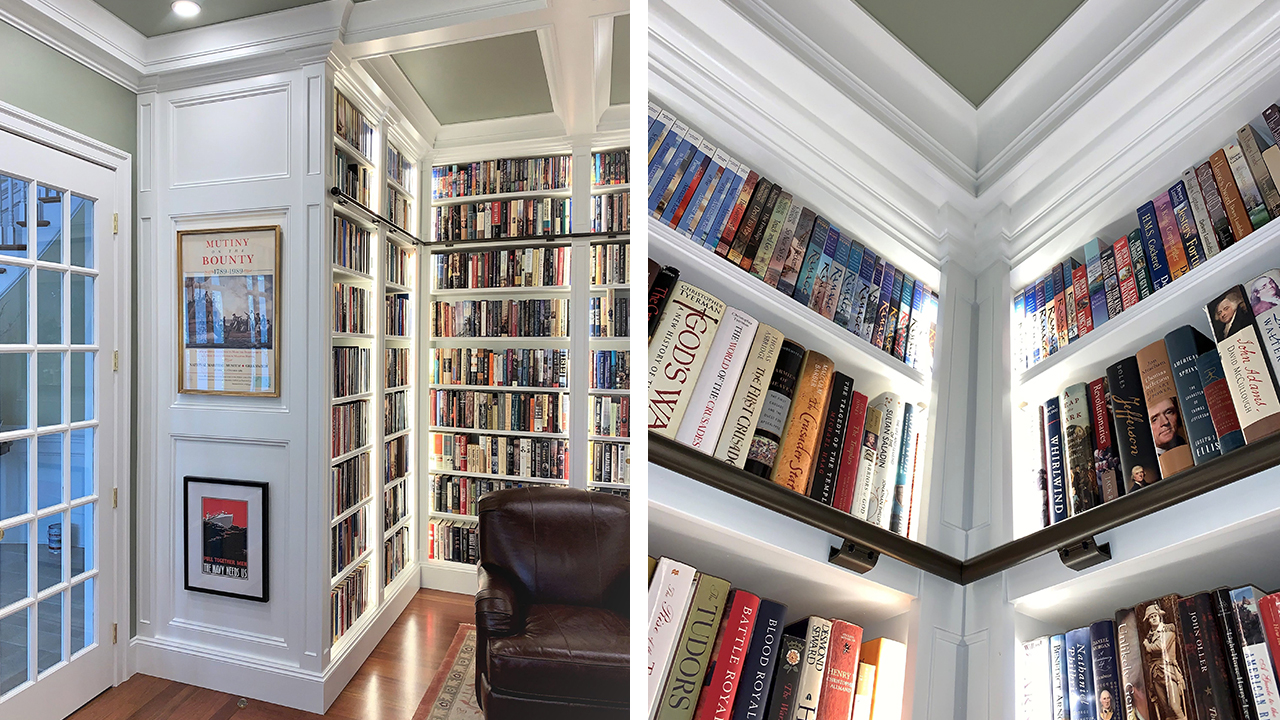 The client was a recently retired four-star admiral who naturally had been traveling for his entire career. He is also a voracious reader and having been on the high seas for so long, he had plenty of time to read. He acquired a large collection of books over time but never had a place he could call home where he could also make a home for his books.

The job was to convert an unused sitting room directly off the front foyer into a classic home office and library. The admiral wanted a space that was stately but not ostentatious—a space that could serve as his home office but also be relaxing enough to sit and enjoy a good read.

The team ran into some major issues right off the bat. The admiral needed an entrance that could be inviting but private when needed, but the entry into room from the front foyer was an opening flanked by two ugly columns. The room wasn’t configured to be a library, with two French doors taking up space needed for bookcases and an older gas fireplace also in the wrong place.

By moving the fireplace, they had to relocate the granite hearth inlaid in the Brazilian cherry floor. The fireplace wall had flanking windows, which took up too much valuable bookcase space. HVAC feed and return vents were located in the wall and floor areas, where the bookcases needed to be positioned.

The first thing the team did was eliminate the ugly columns and moved the French doors to a create a new entry from the foyer. They installed a new, energy-efficient fireplace and repositioned it right and forward so that it would be properly centered and flush with the new bookcases, and they installed a new hearth and hand cut in new flooring with the old. Something major was the creation of custom vents in the cabinetry and baseboard that allowed them to work with the HVAC as it was.