5 Honored for Leadership by ‘Legends’ 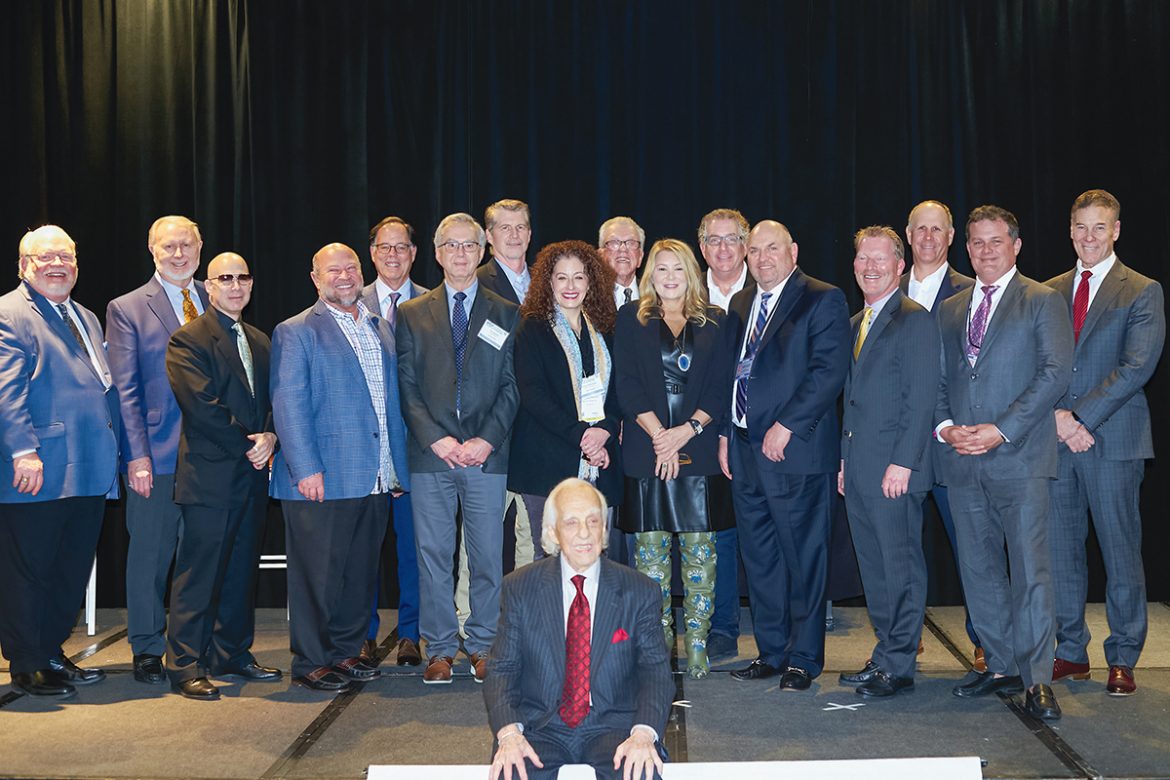 In a ceremony held in conjunction with the International Roofing Expo and co-located Home Improvement Profitability Summit, four industry entrepreneurs were named Legends of the Home Improvement Industry.

The four inductees—Scott Berman of Florida Window & Door, Larry Closs of MaxHome, Mickey Madden of Woodbridge Home Solutions, and Tim Musch of MarketSharp—were nominated and voted in by past recipients of the award. The award was created and is managed by H.I.M.S., a peer group of leading home improvement professionals that was formed in 1986 by Dave Yoho Associates.

The intent of the award is to honor the business achievements of leaders working in an industry not normally accustomed to business accolades.

Amy Zimmerman, chief marketing officer for Tundraland Home Improvement and Renewal by Andersen of Wisconsin, was awarded the group’s Lifetime of Leadership award. Since its inception in 2002, this honor has been awarded nine times; Zimmerman is the 10th recipient.

Emcees for the event were two members of the H.I.M.S board of governors, Murray Gross, the former CEO of U.S. Home Systems, and David Moore, chairman and CEO of Moore Holdings, which owns 10 Andersen Windows business entities among other companies.

The following are excerpted descriptions of each inductee’s professional biography and achievements that preceded the presentation of their respective awards.

Scott Berman comes from a family with a long involvement in home improvement. Early on in his career, he demonstrated a grasp of the complexities involved in running a profitable business while maintaining strong customer satisfaction.

When Berman opened his own business in Florida, he recognized the marketplace had changed. Customers and their buying habits had changed, and his ultimate success in home improvement would only come from a keen understanding of a customer’s needs.

Florida Window & Door was designed by Berman to not only appeal to clients but to also provide an environment where people would enjoy working. It was a winning formula. Today, Florida Window & Door is currently the 23rd largest remodeling and home improvement company in the U.S. with six branches, 280 employees and revenues of more than $100 million.

Berman subscribes to the theory that suffering through “the bad” to get to “the good” is a business requirement. All business owners must learn from the past to make better decisions today.

Berman has worked hard to develop rewarding career opportunities for his employees and training with career advancement opportunities available for all employees. By developing talent internally and focusing on technology and efficiencies, Berman intends to grow the footprint of the company beyond the state of Florida in the near future.

A graduate of Tulane University and the Harvard Business School owner/president management program, Larry Closs in 2004 launched NewBath, which later became MaxHome. Over nearly two decades the company has earned a reputation as one the top remodeling companies in the Gulf region. In 2019, Closs and a partner launched a new business in Florida, Love Your Bath. At present both companies employ 225 people.

Closs attributes much of his success in the home improvement industry to his long-standing commitment to delivering employee satisfaction. MaxHome’s mission statement says it all: Everybody Happy. It is no surprise that this mission has helped MaxHome win top workplace awards year after year.

Within the industry, Closs is highly respected for his ability to launch and grow successful multi-state enterprises with the continued commitment and support of happy, empowered employees and delighted customers in combination with supplying innovative products and services. As such, Closs’ true passion is developing and mentoring his managers into leaders.

Closs is also well known for his dedication to philanthropy across many communities and organizations. He is past chair of Junior Achievement of Greater New Orleans, is a board member of a local school and is a founding member of the charity Baths for the Brave, which raises funds to install functional accommodations in the homes of veterans with a variety of service-related disabilities.

In a career that spans four decades, Mickey Madden has held executive-level positions with some of the industry’s largest home improvements firms, namely Koolvent, American Home Pro, Pacesetter, US Home Systems, Home Depot, and Renewal by Andersen of Atlanta, among others. He is currently COO of Woodbridge Home Solutions.

Madden’s particular area of expertise is sales management. Over the years, he’s recruited and trained thousands of the industries sales “rock stars,” whose presence contributed significantly to the success of each of the organizations where he was involved. His commitment to sharing experiences and his knowledge with those he mentored has been seen as exceptional and intense. Madden is known for his commitment to “make good things happen” for those he is leading. Often that commitment meant leading by example and getting in the trenches.

Under his collective leadership of many sales, marketing, and installation teams, Madden’s career impact through new appointments and business sold by some estimates has resulted in the installation of $7 billion in windows, siding, cabinet refacing and bath refitting jobs. Madden attributes his success and longevity in the business to three core beliefs: a focus on people, strict adherence to proven systems and processes, and the critical importance of building companies around the aspirations of fellow team members.

Tim Musch has spent the last 25 years developing and refining customer relationship management (CRM) systems for contractors. Prior to that he spent 15 years working at all levels in a family-owned remodeling company in central Wisconsin. Currently, Musch is director of business development for MarketSharp, Improveit 360 and RoofSnap. All three are part of the EverCommerce technology platform.

Musch is also an industry educator. Over the years he’s conducted countless seminars, webinars and other virtual training programs. The programs have helped thousands of home improvement entrepreneurs to improve their marketing techniques and to boost profitability outcomes.

His efforts now power the marketing and CRM operations of 4,000 home services companies in the U.S. and Canada. Despite a busy schedule, Musch continually devotes time on a regular basis to the study of practices and up-to-date analytics that can aid those he trains. As a student of the industry, he applies his knowledge to the level of the people he trains. He frequently draws on the 15 years of being involved in the day-to-day business of running a home improvement company and uses that knowledge to speak the language and understand the complications, difficulties and challenges facing owners and presidents in an ever-changing marketplace. A common theme in his outreach is the benefits of systemizing local, independent businesses.

Amy Zimmerman started her career in home improvement in manufacturing. She believes this experience working for a manufacturer had a significant impact on her subsequent success as marketer with many retail companies. In her career, Zimmerman has placed a great deal of interest in hiring, training, and understanding the complexities of the home improvement industry.

As a marketer she also witnessed firsthand how some owners have prospered and thrived even as others made mistakes attempting to take shortcuts. To that end, Zimmerman has been continually focused on expanding her understanding of the importance of how to properly develop leads and how best to control their distribution to ensure profitability for retail home improvement companies.

Zimmerman’s career success is also the result of her deep commitment to selecting the right people to be correctly matched with their positions and responsibilities. Equally significant to Zimmerman has been the development of educational techniques to ensure that new hires follow the methods and practices of their employers.

Over the years, Zimmerman honed these practices into a science. As a hard-charging marketing and lead-generation leader, she reminds those people around her of the many industry changes and challenges that she’s successfully met as a senior leader with home improvement firms beginning in 1992. The world of business and the needs of homeowners have changed much and have required continual innovation and resolve to meet the moment.

Today, Zimmerman oversees the marketing activities of a $100 million bath, window, deck, and kitchen business. In addition to driving cost-effective and creative lead generation, her primary focus is to develop strong teams and the next generation of marketing leaders. In particular, she has been committed to cultivating and mentoring women leaders within the home improvement industry. QR

Recipients of the Legends of the Home Improvement Industry Award