Utilizing an unfinished area allows a basement remodel to achieve the client’s desire for connected yet distinct spaces for entertaining, gaming and relaxation.

After the installation of a pool in the backyard of their Chestnut Hill, Pennsylvania, home, the homeowners sought to update the space closest to the pool area—the basement—in anticipation of greater recreation and entertaining. Seeking a space that would be appropriate for children and adults alike, the homeowners connected with Krieger + Associates Architects of Philadelphia and Orion Builders/Remodelers of Ardmore, Pennsylvania, to bring their wish list to fruition.

Adam Jacob, AIA, associate at Krieger + Associates Architects, details the project scope: “We had been asked by the clients to come in and take a look at the basement, which was maybe half-finished and the other half unfinished, and see what would be possible to expand the finishes and create some entertainment spaces, some game areas and then also have an exercise room as well. They also wanted to have a bathroom with a shower that the kids could come in [and] out of the pool and rinse off before they head upstairs and walk across wood floors.

“We came in very early in the process in terms of the design and worked with the homeowners throughout the whole process from start to finish of construction,” he continues. “This was a newer home [so] there were higher ceilings and, on one side of the house, was a walk-out and a modest amount of natural daylight that filters in. There was an existing door that leads to the backyard and short distance to the pool, so that was a natural pathway to utilize for the bathroom and cubbies for the towels and whatnot.”

A goal for the space overall was a less “basement-y” feel, so partitions were eliminated to create a more open space as well as allow daylight farther in from windows near the walk-out area. The project maintains the basement space’s existing footprint but taps into square footage that was previously unfinished. While openness was a driver, the clients sought defined areas for games, an adult social and TV space, and a bar area. Additionally, a pre-existing exercise room was enlarged but kept as a separate enclosed space. The basement’s pre-existing bathroom also saw updates to its configuration to accommodate a larger shower and double vanity.

Peter Maruca, president of Orion Builders/Remodelers, notes the blank canvas of transforming the previously unfinished space was not without its challenges. “I would say one of the biggest technical challenges was some structural steel, in a way, supporting the house. A few columns we had to relocate, which meant temporary supports, new footings, new columns and then resupporting the beams,” he explains. “Typically, a basement fit-out in a relatively new house—I think the house was maybe 8 or 10 years old—is a no brainer, but there were some structural issues.

“Krieger’s team is cracker jack, and there were no surprises. They’re awesome, so it was more just a question of execution than anything else,” Maruca adds. “Luckily we were able to run the whole project through the French doors, so a little bit of a schlep through a very nicely landscaped backyard. But we have a great team, trade partners and vendors, and everyone knows the drill when you work on properties like this. The family was just upstairs; obviously you go to great lengths to dust-protect [and] seal off ducts so dust doesn’t get sucked upstairs or through the HVAC system. There was a larged, finished stair [to the] upstairs that was open—there wasn’t a door at the top—so we had to go a little over the top with dust protection to separate the zone from the family.”

Altogether, five new Lally columns, aligned with remaining columns, were constructed as well as a new steel ceiling beam support that spans the opened space. Pre-existing ductwork also necessitated thoughtful handling—the HVAC configuration was redesigned—and Jacob notes the plans took further advantage of some of the ductwork rework, like the higher ceilings centered over the sitting and game areas.

“We did end up with some areas that were lower ceilings that are hiding ductwork, and we did have to reroute some of those paths in order to create some of the higher pop-up spaces—predominately in that larger TV-viewing space and in that game area. That definitely took some coordination to be able to reroute and create those higher ceilings, but I think, in the end, it was worth the effort in order to have that space,” he says. “The one piece that came about that was not something [the clients] had asked for was the fireplace. That was something we had suggested and became a nice focal point for that central seating area. That’s actually a double-sided fireplace, so it serves both that and the game table area. It has a vent that runs through the remaining unfinished part and out through a sidewall [which] definitely played into how things all laid out and one more piece to coordinate with the HVAC.”

While Jacob explains the layout of the unfinished space seemed to naturally lend itself to the creation of the wine room, Maruca adds that constructing such an area necessitates a bit of a balancing act. “In Pennsylvania, it’s common to sub out the licensed trades, which are plumbing, electrical and HVAC. So we have trade partners who expertly handle those,” Maruca says. “The HVAC sub helped with the wine cooling system, and that’s always a little bit of a challenge—choosing the right system to cool and dehumidify that space efficiently. And not to get too technical, but there are units you can use now which you can vent to an unfinished area as long as it’s over a certain square footage, so we were able to do that. In lieu of an outside condensing unit, we were able to put that in an unfinished area of the basement.”

Transforming the basement from a playroom flanked by an exercise room and TV room into the larger, open space for games and entertaining also reflects a certain maturity to the finishes and basement overall. “This family has three kids that were, at the time, I would say preteens; and there was a juvenile feel to the TV area, some of the games and whatnot that were down there,” Jacob says. “It was really just a romp room for the kids, and it has since matured into spaces that suit both the adults and, at the same time, kids can still be there. There’s a duality they could both function together but still have somewhat of a separation as well. Again, this was sort of a natural result of how the space laid out or [how it was] given to the existing footprint of the building.”

While the new bar area is intentionally located next to the pre-existing bathroom to take advantage of the existing plumbing rough-ins, both reflect the homeowners’ desire for spaces that accommodate adults and kids easily. The bathroom features a large, low-threshold marble shower and a double vanity, and the bar area includes ample storage for snacks and drinks.

Jacob explains that intentional repetition of elements  helps further blend the basement spaces, noting the wood used as the countertop in the bar area as an example. “It’s what’s called a wormy chestnut, so it is salvaged chestnut and it has wormholes and imperfections that really give it a lot of character. That was a really fun find to be able to use that wood,” he says. “That same wood was also used in the game table area as well as at that built-in, so there’s elements of that sort of chunky chestnut tops that are used throughout to sort of unify.”

Ultimately, the combined vision and efforts of the homeowners with Krieger + Associates Architects and Orion Builders/Remodelers resulted in the expansion of the basement’s finished area by 50 percent. “They really had this vast, unfinished space which was great to be able to tap into that,” Jacob notes. “There was thought put into how the spaces relate to each other.” |QR 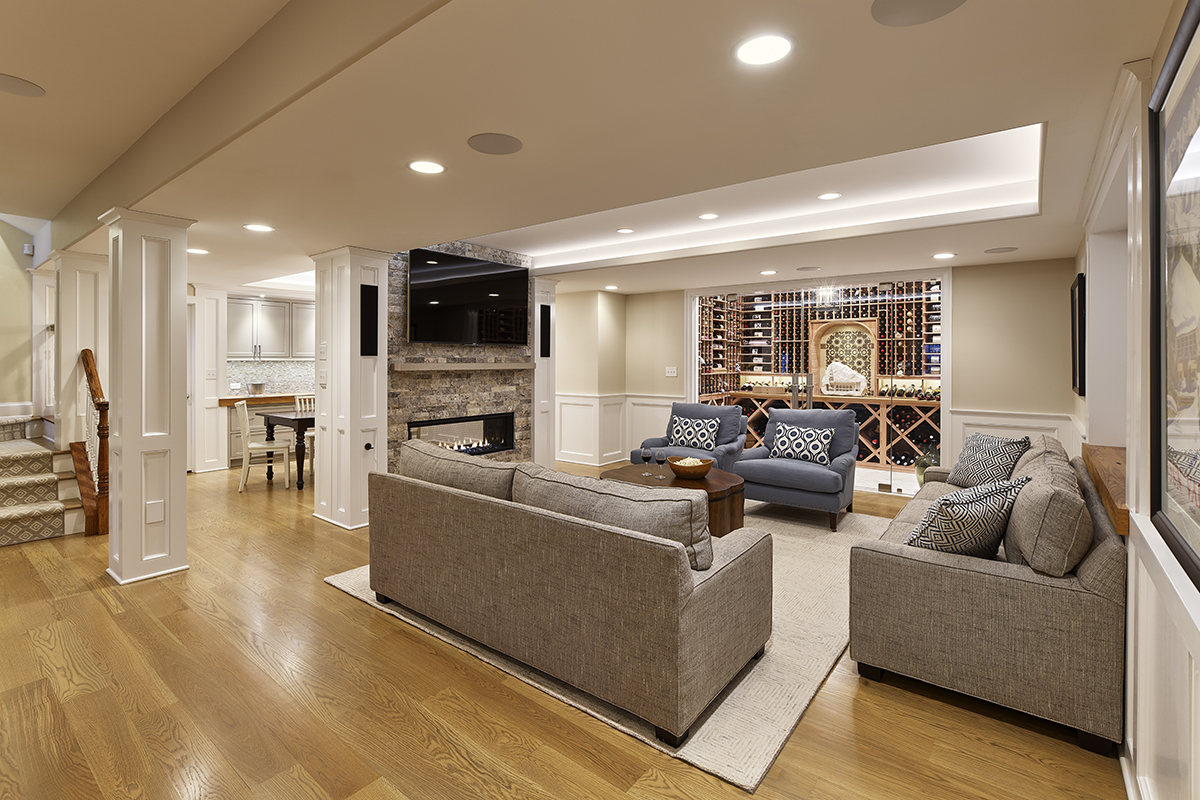 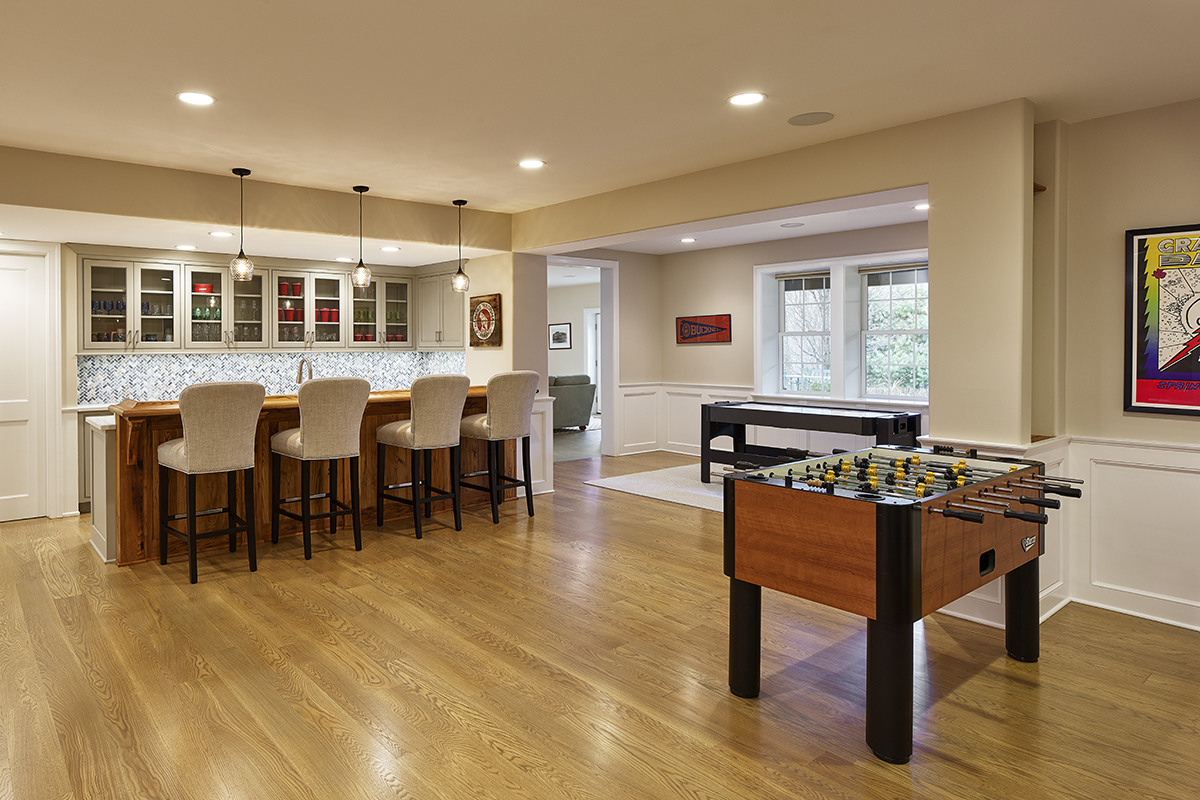 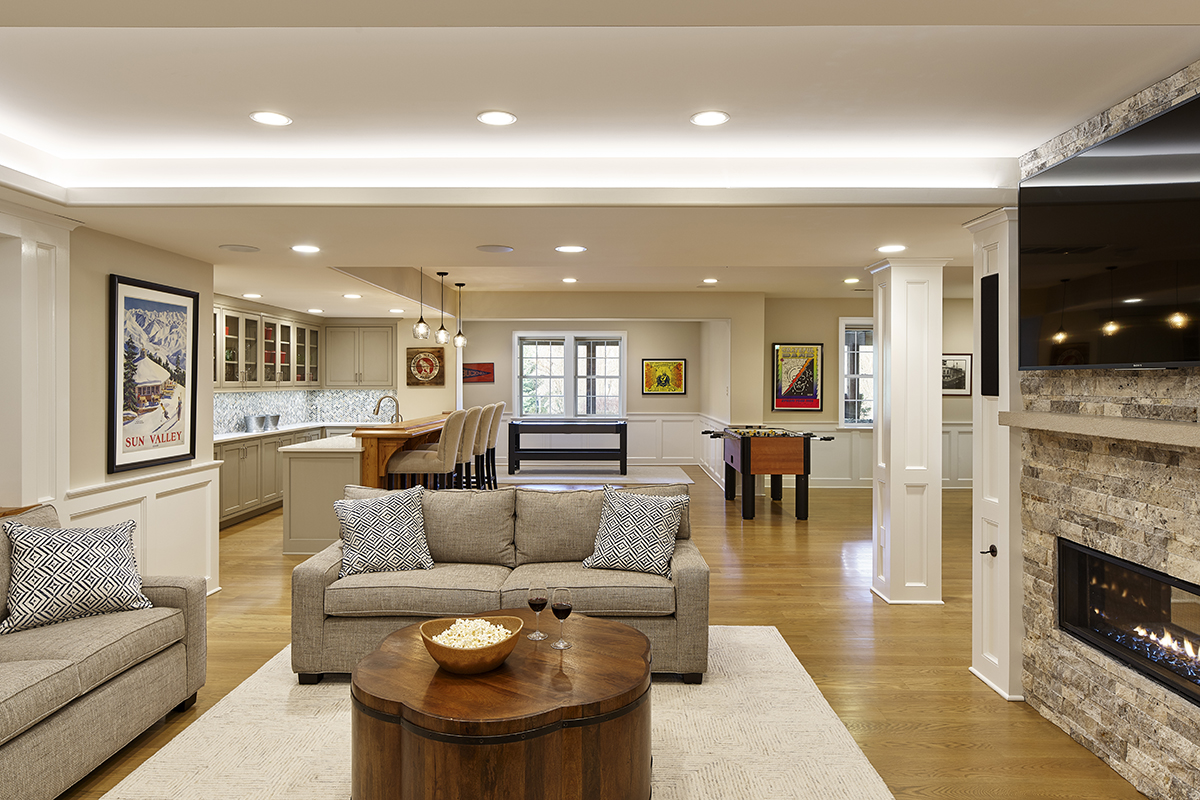 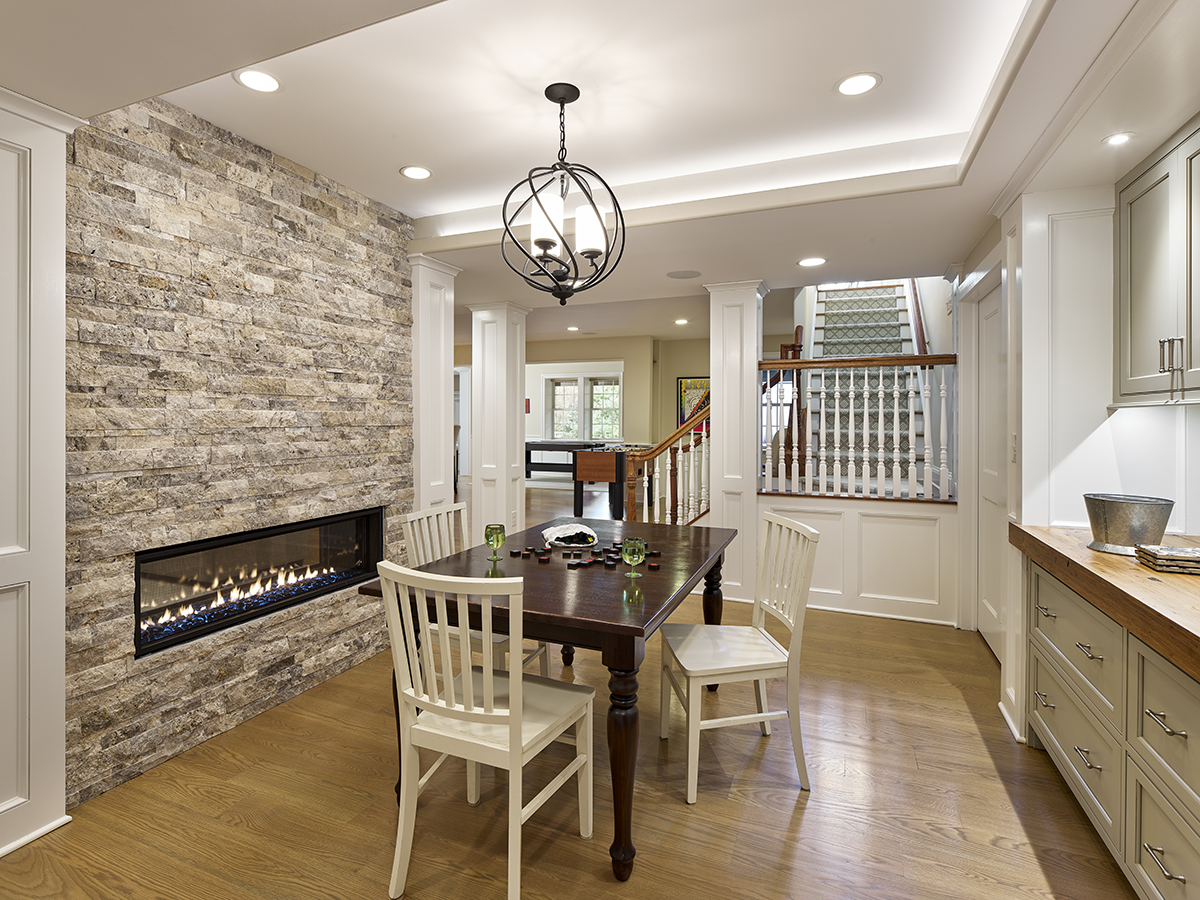 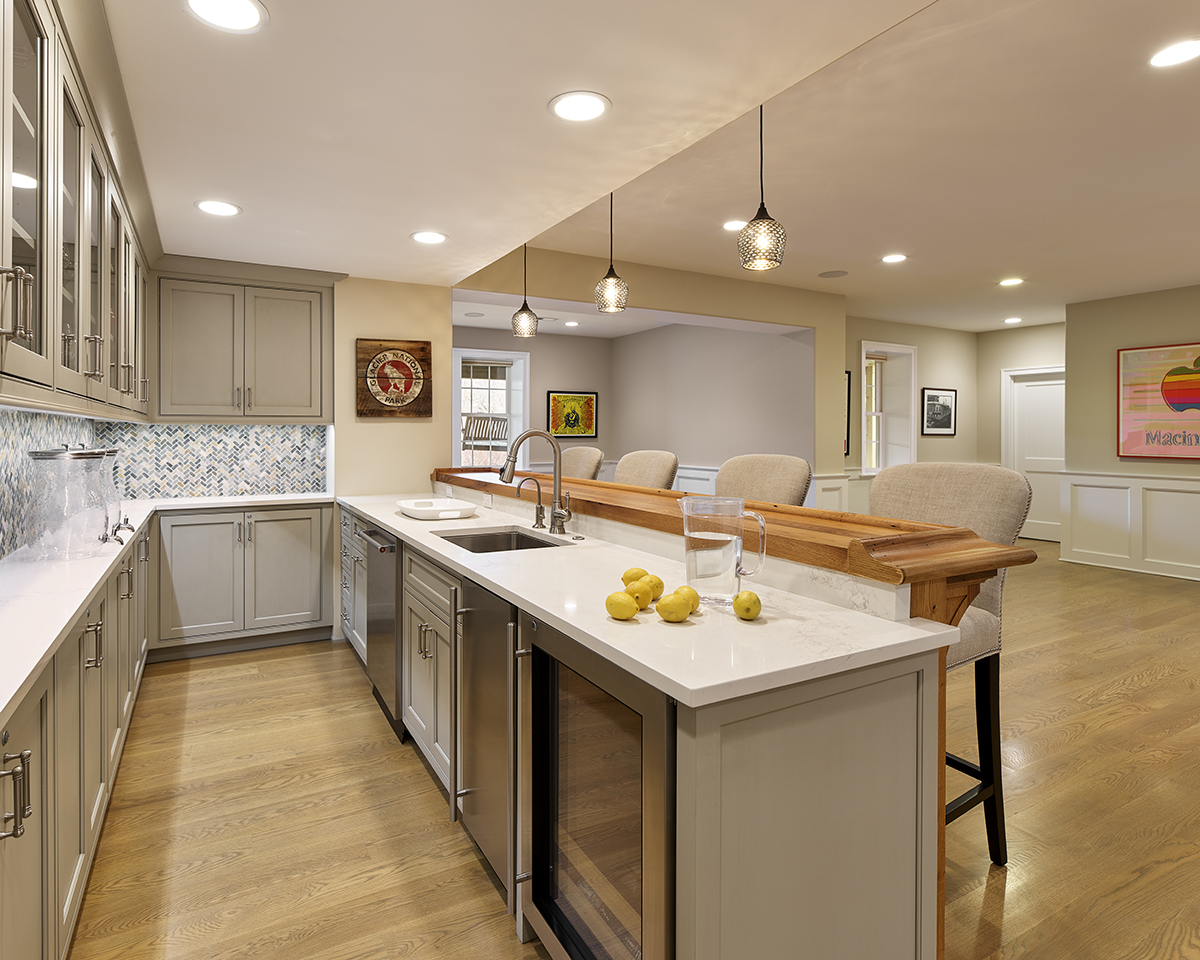 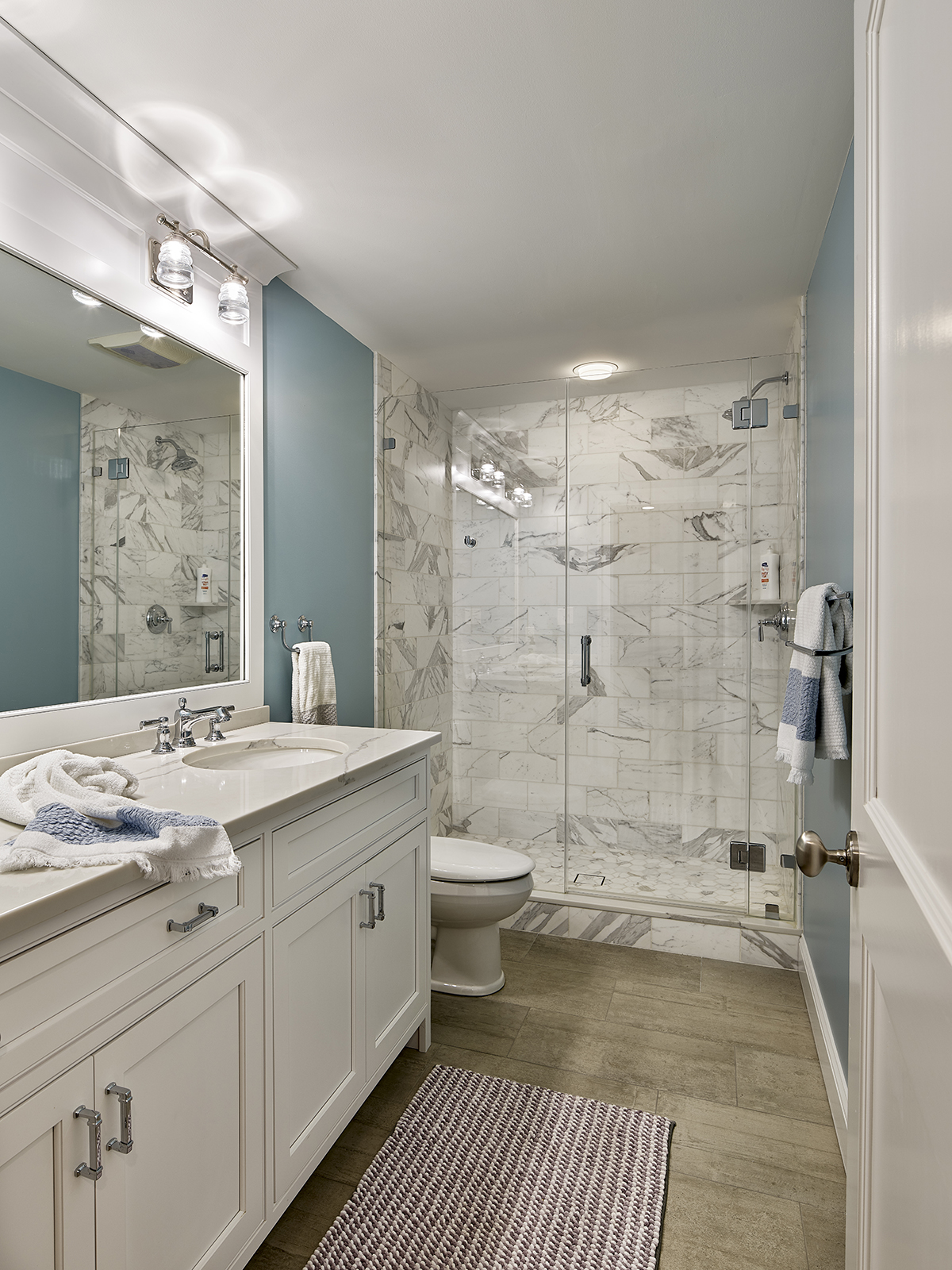