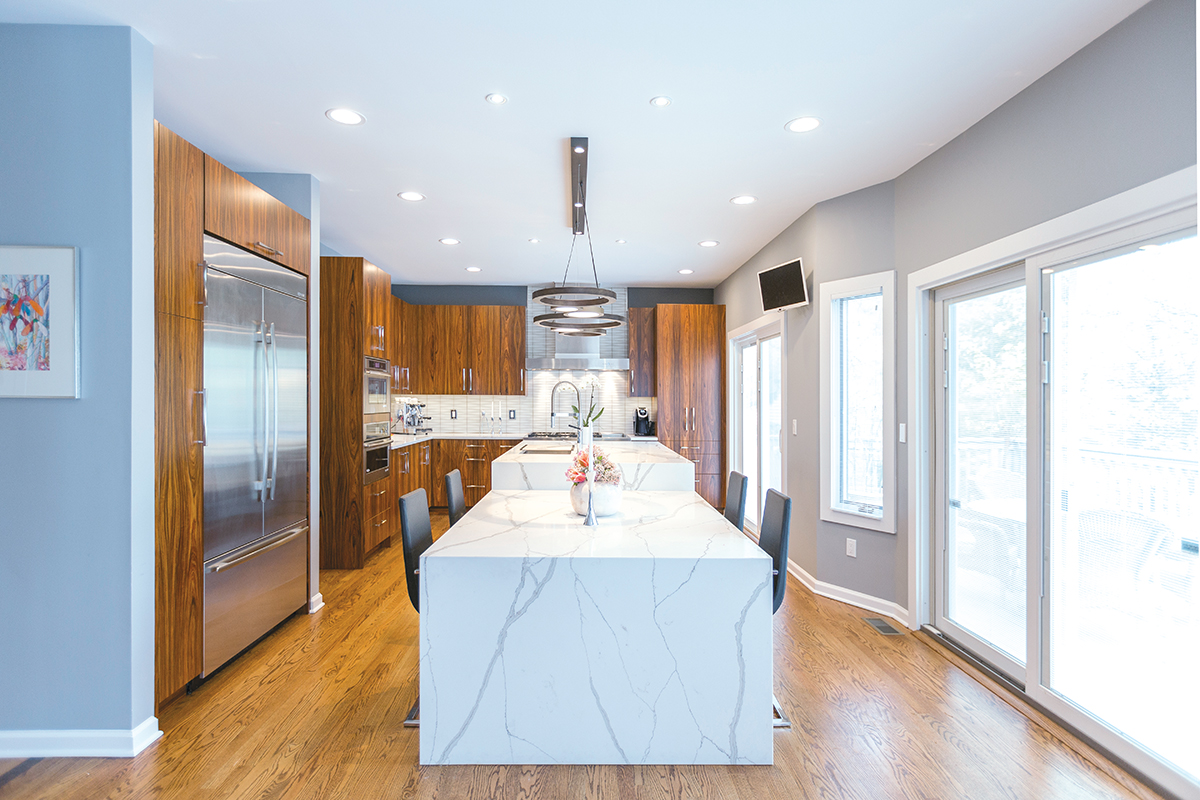 Marriage is the union of two people, but it is also the official combination of two peoples’ stuff. In this particular case, it also meant the merging of a couple who enjoys cooking and entertaining into one 250-square-foot kitchen.

“Our lawyer attended [an] open house with his fiancé, and she walked in and said, ‘Oh these guys get me. These guys are going to be our designers if they agree to let us hire them,’” says Steve Moran, co-owner of GreenRose Design in Glen Ridge, New Jersey. “She was moving into his home and selling her own, so she asked if he would mind if she remodeled his late ’90s kitchen to be more reflective of his-and-hers current style of living. She’s a lady who is in design herself—she designs brochures and reports—so she had a tremendously strong design sense and just needed help pulling it all together and finding what materials are out there and [getting] access to those. It was a really terrific collaboration between us and her.”

The home in Basking Ridge, New Jersey, is located in a development, designed in what Moran referred to as ’90s style: a center-hall colonial, 4- by 4-foot kitchen island, and half-wall between the kitchen and sunken living room. Ultimately, GreenRose Design was tasked with transforming the space into a modern, elegant and functional space, where two chefs could work simultaneously and have better flow among the surrounding spaces while keeping a dining and seating area. Moran began working on different layouts before landing on a solution that made the island “a little bit more spectacular,” but it necessitated removing a wall of kitchen cabinets.

“Previously, [there] was just a small window above the sink [and] a couple of cabinets before the wall widened where the kitchen table was and became a double-slider [patio door.] So we figured, let’s widen the island, add a few more cabinets, and make half of the island utility and half kitchen table,” Moran explains. “And the only way to do that was to take out that back wall of cabinets, and let’s bring the outdoors in [by] putting another slider of equal size, mass and configuration next to the other one. Then, it feels very open and light, opens to the outside [deck] and gives us that extra room we needed to make the island more special.”

The 6-inch-wide half-wall between the kitchen and sunken family room, more often than not, served as a junk collector and closed the rooms off from each other, so that was also removed. A space previously occupied by a walled-in closet/pantry became the new location of the refrigerator and a side pantry, which also helped the room’s flow. “It pulled the entire kitchen out from the small, basically 10- by 10-foot space it was, to be extended the full length of the dining table/island,” Moran explains.

Once the clients saw the layout in CAD and SketchUP, they were fully on board with these solutions, he adds. Next up came bringing the approved design to fruition.

To say that the creation of the kitchen island took planning seems like an understatement in light of its multifunctional usage, not to mention its mere size. “As designers, we have people who think, ‘Oh, just go in and make it pretty.’ That’s maybe 25 percent of the way there; the other 75 percent is making sure it’s practical, useable, functional and structurally sound,” Moran says. Plus, in this case, he called upon a background in engineering.

“We had to buy book-matched pieces of quartz so that the veining matched [throughout], and then it was a very intricate layout of each slab because not only did we extend it from the island area [into the dining section], but we also gave it a 2 ½-inch false thickness,” he says. “What they do with that is basically take a 2 ½-inch strip of that piece of quartz and miter it on the corners and miter the corresponding top on the corners, so you can do a 90-degree angle for those. But you have to use the first 2 ½ inches of the slab for that, and they go right into the rest of the slab so that the veining matches perfectly.

“It was a real engineering exercise, which was a challenge for us because we’re right-brain thinkers,” Moran continues. “We don’t normally think in those ways, but luckily I was raised by an engineer so I had that in my background.”

This background also helped with concerns about the weight and design of the waterfall edge. The 6 ½ feet of quartz on the utility portion of the island is supported on one side with a 2-inch frame that is covered with the same veneer to match the cabinetry. While the GreenRose Design team worked with a client-selected fabricator on the project, Moran wanted to ensure the island being top-heavy on a side never became an issue.

“My concern was, because of the fact we had a lot of weight at that top—it was top-heavy on that corner especially—let’s say somebody bangs into that corner from the side of the table. Are they going to flip that entire thing because it’s so top-heavy? And because the top met the waterfall edge on a miter, it’s not the same as if that top were sitting on a flat surface—it’s sitting on an angled surface,” he explains. “So I insisted that underneath, in that corner, they put in a steel, L-shaped bracket, and I also wanted a bracket on the floor that screwed down into the floor joist onto which they sat the bottom of the waterfall edge, so that it was all screwed in together, provided additional support and reduced the amount it was top-heavy in that corner.

“At the end of the day, we’re nothing if not our reputation, so the thought that somebody could bang into that and just anybody getting hurt was really a paramount concern for us, so we needed to make sure it was—as well as being aesthetically beautiful—structurally sound,” Moran adds.

While the island is a huge, grand piece for the space, many other elements contribute to the client’s goals of creating a space for people to gather, whether cooking or entertaining. The Contardi statement light was a housewarming gift to the couple from an Italian friend who works for the company, and Moran notes its placement over the island was very specific. The pendant features a combination of lights located within the circles and targeted, small cans up on the mounting bracket that shine through the circles below.

“My concern was [that] when you had just the light fixture with those rings, because the island was half utility, you needed to be able to brighten that space so you don’t cut yourself when you’re chopping—it was really designed to be a light fixture for a dining table, which is softer lighting,” Moran says. “We put the four cans [on each side] that surrounded the light fixture on dimmers, so the clients could dim for entertaining, but brighten it up so they could see what they were doing when using the utility side of the island. It was a very specific focus on where exactly [the light fixture] gets placed and where the cans go on either side, so it looks centered yet is providing the task lighting function we needed.”

Beyond considering the placement of lighting, Moran sat with the client and walked through her existing kitchen to see how she used it. Several design considerations resulted from this, including the lowering of the wall-mounted appliances for easier access due to her height and with consideration to advancing age. Also, the couple’s enjoyment of entertaining meant certain platters and bowls needed to be more readily accessible, necessitating additional storage solutions. “We ended up with some nice, long, 42-inch triple-drawer cabinets that gave her space for her pots, pans, and lids. We did back-to-back 24-inch-deep cabinets that give you a substantial amount of space for platters and bowls,” he says. “And then we did a couple of tall cabinets that basically you could just slide cutting boards and platters into. Then, there’s the space above the fridge that’s always kind of wasted space, so [we] put the platters up there because the fridge is a little bit deeper, utilizing that space as well.”

Such storage solutions, in spite of the reduction in the actual number of cabinets overall, better utilize the available space, Moran adds. To get the exteriors of the cabinets up to par, he and the client worked with a cabinet maker in New Jersey on custom solutions with a rosewood veneer. As with many of the other features of the kitchen, time was spent to ensure the veneers lined up, top to bottom, which Moran explains is something that may not be noticed per se when done correctly but would feel off if not done.

“We were able to have a really terrific cabinet maker, who we had just started working in New Jersey, basically build the box and then apply the veneer to it. We said to him, ‘Look, it’s really important, when you’re taking these 4×8 sheets of veneer, that the cabinet door above matches the same grain as the cabinet door below.’ He was on board from the beginning and a true detail fanatic,” Moran says. Such detail work is “what takes a good kitchen to a great kitchen—when you’ve got a true artisan you’re working with who understands that.” |QR