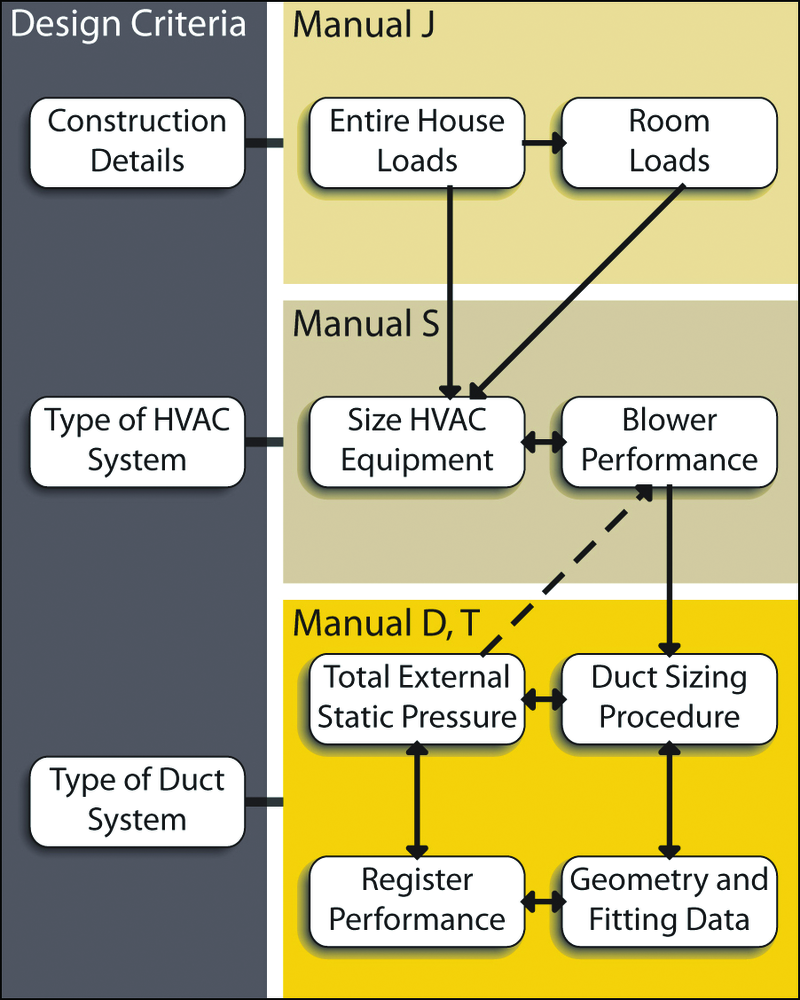 You’ve heard it before: When it comes to installing or replacing HVAC systems, bigger isn’t necessarily better. HVAC contractors probably also have heard that getting a system sized right depends first on figuring load calculations properly, which impacts selecting the right equipment for a home’s needs and duct sizing and distribution.

But some seasoned HVAC professionals probably wonder why they should go through the trouble and time of performing calculations when rules of thumb have served them well.

The answer is houses have changed a lot in the last 10 to 15 years while rules of thumb have stayed the same. Code requirements for new houses have risen significantly and will continue to rise for at least the next six years. In addition, more homeowners are updating their older homes with better insulation, windows and other energy-efficient items. When a home’s airtightness and insulation values rise, its peak heating and cooling loads fall. High-performing homes can have radically different HVAC needs than standard homes.

Heating and cooling loads are the measure of energy needed to be added or removed from a space by the HVAC system. Figuring a house’s load depends on many variables: a house’s location, the tightness of its envelope, the seasons, even the time of day. To calculate the load, use the Arlington, Va.-based Air Conditioning Contractors of America (ACCA) Manual J Version 8. The manual applies to single-family houses, low-rise condominiums and townhouses. Software is available to make these calculations much easier for the designer.

Although HVAC contractors use these manuals, they still tend to oversize the HVAC system to support the worst-case scenario. The problem with that is a homeowner has an HVAC system designed to meet the cooling load during that one super-hot, super-humid, full-sun day in August when he has 20 of his closest friends visiting. The system is completely wrong for the other 364 days of the year.

The problems associated with an oversized HVAC system result from short-cycling in heating and cooling modes. Peak operational efficiency and effectiveness dictate that a system run as long as possible to meet loads. That may seem counterintuitive. A good analogy is the difference between the mileage and performance of a car traveling consistently at 55 mph on the highway and one frequently stopping and starting in heavy city traffic.

Although HVAC contractors manipulate the numbers to prevent possible client complaints, the “padding” can actually hurt their businesses.

A report, “Guide to Heating and Cooling Load Calculations in High Performance Homes,” produced for the U.S. Department of Energy’s Building America program by Pittsburgh-based IBACOS, shows that relying on rules of thumb instead of hard numbers can have dramatic consequences. The report was prepared for new construction, but the concepts apply to remodeling, as well. (View the report at Ibacos.com.)

All the modeling for the report was based on two hypothetical 2,223-square-foot homes—one slab-on-grade home located in Orlando, Fla., and one with a full conditioned basement in Chicago. ACCA Manual J Version 8 baseline load calculations were performed on both houses based on the 2009 International Energy Conservation Code (IECC) prescriptive path using WrightSoft Wright-Suite version 8. The Chicago house’s baseline calculations were IECC Climate Zone 5 while the Orlando house’s baseline calculations were IECC Climate Zone 2. The report demonstrates the impact on the loads of these homes when common inaccurate adjustments (known as safety factors) were made.

IBACOS manipulated the baseline load calculations in the following categories:

ACCA Manual J Version 8 says: “… the designer should take full advantage of legitimate opportunities to minimize the size of estimated loads. … the practice of manipulating the outdoor design temperature, not taking full credit for the efficient construction features, ignoring internal and external window shading devices, and then applying an arbitrary ‘safety factor’ is indefensible.”

Even if the HVAC system is correctly sized for the home, attaching it to an existing duct system that is the wrong size will result in an inefficient system. ACCA Manual D helps size the ductwork for the system. Mistakes are easy to make here, too—especially in remodeled homes.

Attaching a properly sized HVAC system to an existing duct system that’s the wrong size will result in an inefficient system—and a noisy one because of pressure loss in the ducts. If a remodeler increases an older home’s insulation, tightens up the enclosure and makes it high-performing, there’s an excellent chance the older ductwork is too large for the reduced air volume of the new HVAC system. Ductwork must shrink along with load volume to get the proper “throw” of air into rooms.

After load calculation, system sizing and ductwork selection, it’s also important to make sure a system has the diffusers it requires, which is covered in ACCA Manual T. To achieve the right mix of air, it’s sometimes necessary to change diffusers and relocate them from the floor to high sidewalls.

Homes and homeowners change, thumbs don’t. Padding calculations for “safety’s sake” may be more dangerous than contractors may think. If a system that’s sized for efficiency, durability and comfort isn’t enough to make you reconsider those pesky Manual J, S, D and T worksheets, think about this: Homebuilders and homeowners are looking for a way to distinguish HVAC contractors; the ones who can respond to change will end up with an edge over the ones who are happy sitting on their thumbs.