Action to cause landslide through industry, as rental payments stop, and so does demand for R&R work.

In an unforeseen action, the Centers for Disease Control and Prevention (CDC) last Tuesday issued a broad moratorium on evictions until Dec. 31. The action covers all 43 million American renter households and the financial impact on landlords will likely reduce demand for a portion of the residential remodeling market.

Under the terms of the new edict, tenants earning no more than $99,000 (or $198,000 jointly) may receive this protection, which takes effect Sept. 4 and lasts through Dec. 31. Landlords are still able to pursue eviction against tenants committing crimes or threatening the safety of other residents or property.

During the early months of the coronavirus crisis, tenants who lived in rental properties with federal-backed mortgages could not be evicted. However, this only covered roughly 28 percent of renters. Many states enacted then short-term suspensions of their own, but none of those actions were designed to protect renters once they were lifted. Indeed, a moratorium now only delays the inevitable when the ban is lifted.

National Association of Home Builders Chairman Chuck Fowke expressed concern for the action taken by the CDC, stating the moratorium could have unforeseen negative economic consequences if it isn’t coupled with funding for rental assistance.

“It is imperative the White House works with Congress on a new coronavirus relief package that will protect tens of millions of renters and small business property owners who are suffering severe financial stress from the pandemic,” Fowke said.

The longer landlords go without rent collections, the more likely they are to put off repairs or delay routine maintenance.

An estimated $96 billion of R&R activity annually is associated with work by landlords—large and small—who regularly undertake repairs and improvements as units turn over and as maintenance is required.  According to estimates from John Burns Real Estate Consulting, that number is expected to decline slightly by 1 percent in 2020 and more in 2021. 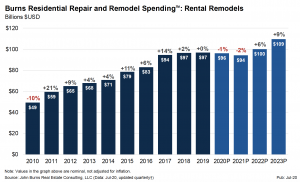 “Before this moratorium, we expected rental big-project R&R to be weakest part of the home improvement industry in 2021 (7 percent),” said Burns analyst Todd Tomalak, “This increases my conviction that rental big-project will underperform spending by homeowners. Big-project rental spending is ultimately driven by if landlords are willing to capitalize big expensive improvements, which usually means properties that are increasing in value and a high occupancy of renters who actually pay their rent as well as rent growth. That is a tough backdrop to believe in given moratorium.” 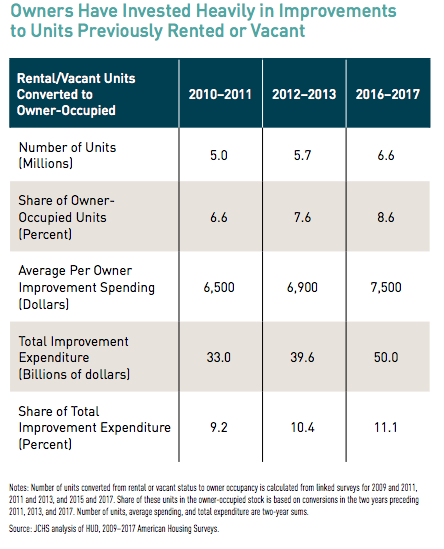 Kermit Baker, director of the Remodeling Futures Program at Harvard’s Joint Center for Housing Studies, agrees.­  According to the JCHS’s Improving America’s Housing report from 2019, since the 2007 recession, spending on improvements and routine maintenance to rental properties, in addition to owner-occupied properties, has increased the value of the existing stock.

Not only that, but these R&R actions have contributed a dominant share of residential investment. The surge in rental demand has lead owners to invest in their units, especially in upgrades and renovations, which has driven an unusually large share of the growth during the recovery period. Several market forces were set to cause a steady decline of this growth in 2020, but now, those numbers are looking more dire.

This action will particularly affect ‘mom-and-pop’ landlords, who may owe mortgages they must continue to pay during this period without rent fulfillment. Corporate landlords, on the other hand, are  unlikely to face consequences through the moratorium period, because large-scale investors are better equipped to weather a short-term downturn. In turn, those smaller landlords won’t be able to keep up with payments, let alone complete necessary renovations and repairs on their properties.

Congress and the House of Representatives are returning from recess on Sept. 8th and Sept. 14th respectively, after not passing any sort of financial aid prior, and allowing the CARES act to expire. After this CDC mandate, and the outspoken response on the part of landlords and remodelers alike, eyes will be on the two branches to pass some sort of financial stimulus to help mitigate the effects across the country. QR