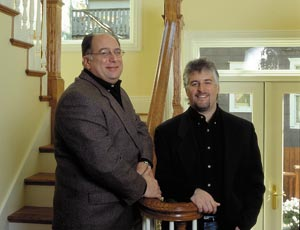 Michael Menn and Andrew Poticha run the Northbrook, Ill.-based design/build firm Design Construction Concepts, Ltd. (D+CC) from an architect’s perspective. Together the two partners have 44 years of architectural experience. They’ve steered the business from a checkbook-operated “practice” in the early ’90s to a viable and profitable business with value outside of its owners. They’ve done it in large part by using a consistent approach to design/build.

As architects, design is a core competency at D+CC. Their approach to design/build is to offer the client the concept they want, while keeping a firm grip on the budget, then preserving that concept through construction to completion.

“Because we’re architects, design has always been important,” says Menn, “but we grasped the concept of budget very early on.”

D+CC tracks design and construction as separate profit centers (design being more profitable) and enters into two contracts with clients. If, at the end of the design phase, one or both parties want to terminate the process, (i.e. the “client from hell”) this system allows for it.

The design phase itself is then broken into three phases: preliminary, development and construction documents. “We give them a broad range for budget at the end of the preliminary phase, and then we narrow that scope,” Menn says.

As the team selects materials, D+CC can manage the budget. If, for example, the designer budgets $12,000 for a room and the client’s selections work out closer to $20,000, they know upfront they need to revise the budget or change the plans.

“We narrow down the budget and let them make the choice,” Menn says. “Communication and budget are the two keys that set us apart in the design phase.”

In this manner, when D+CC finishes the drawings and gets to the price, the client is satisfied instead of shocked, D+CC gets paid, and the job likely proceeds to construction.