Platt Builders enlarges the living space of a 1797 house by raising the roof as opposed to expanding its footprint. 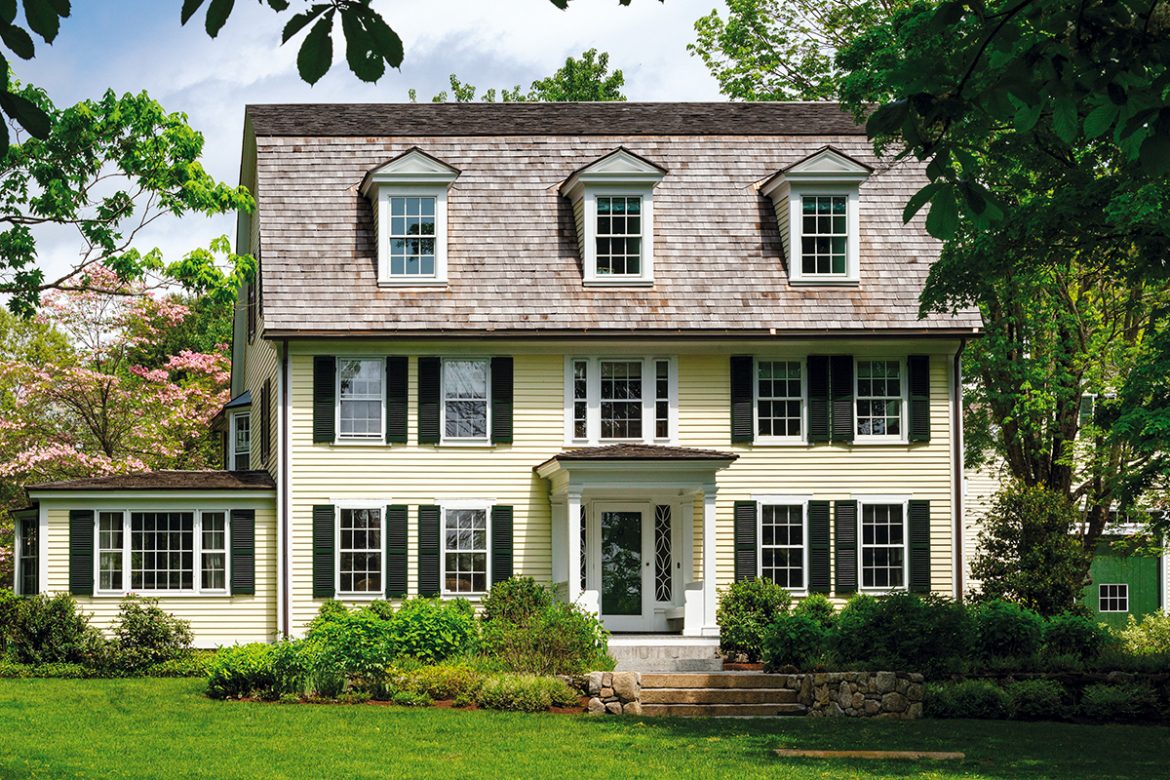 With four teenage daughters, a family in Concord, Massachusetts, needed more space to help keep the peace. They wanted to convert their unused attic into a livable third floor to give each daughter her own space and the client a home office with higher ceilings. Built in 1797, the house contained 6-foot, 11-inch ceilings, so the client (6 feet, 6 inches tall) sought relief as well.

Platt Builders, who had worked closely with the homeowners on three previous projects, brought in architect Sally DeGan of SpaceCraft Architecture to conceptualize the space and work through the design. DeGan investigated keeping the existing roof and adding a number of dormers, says Halsey Platt, owner of Platt Builders, but the plan did not create enough usable space. Also, the maximum ceiling height still would have been less than 8 feet. DeGan then proposed raising the roof and reaching for the sky.

“One of the strokes of brilliance from Sally was recognizing there’s a historic property two miles closer to the center of town that has almost the same width and depth as the front of the [client’s] house, [was] built in a similar time period and has a gambrel roof,” Platt explains. “By utilizing images of that property, it became a pretty easy sell for them.”

With a footprint of 32 feet by 36 feet, the main house provided about 1,150 square feet of living space per floor. Platt Builders and DeGan collaborated with a structural engineer to determine the load paths down to the basement and elected to frame an entirely new floor diaphragm on top of the original timber frame. To protect the two lower floors of the existing house from water damage, the remodeler developed a plan to pre-build the entire roof system in panels, including five pre-built dormers.

“We had worked with the client three times before and knew that they were just a fantastic client, and [they] had a great deal of faith in us,” Platt says. “We knew right from the get-go that it was going to be complicated because the entire first floor and second floor of the house was finished to a very high level—finished wood floors, wallpaper throughout the house…beautiful fixtures.

“We knew we couldn’t go through a normal stick-frame construction that was going to have it open for two to four weeks,” he adds. “We had to get the whole thing watertight immediately.”

Because of the nature of the existing five-pitch timber and purlin roof, Platt Builders could not ascertain its exact dimensions, yet still had to pre-build an entirely new roof. With a crew of 14 people and an 80-ton crane, the company removed the existing roof in the morning, framed the floor deck by late afternoon, and then sheathed and tarped it off by 8 p.m. that night, Platt notes.

“We did an enormous amount of planning and then an enormous amount of pre-building. We had a crane there for both days, and at six o’clock in the morning on the first day, we chain sawed the roof structure off,” he says. “There were a couple of masonry chimneys that had to come down as well as some HVAC systems up there, and that had all been done before we tackled this part.”

When the roof came off, the remodeler determined that the top of the frame was 2-¾ inches out of level and 5-¼ inches out of square. Platt Builders and the framing crew quickly did the math and determined how to put a new, square floor on top of the existing parallelogram. On the second day, the company pulled away the tarps and started putting the pre-built roof fame sections in place with the crane.

Not an Attic Anymore

“We knew that it was not going to be square, but it was significantly out of square; and we had already pre-built the entire roof—four sections of the roof—and the five dormers,” Platt notes. “So, we did the calculations and figured out how we were going to put a new square platform on top of an out-of-square first and second floor framing. Then we framed a whole new floor deck.”

By 5:30 p.m. on the second day, the team had assembled the roof, built the gable ends and protected the structure with an ice and water shield. The new floor deck came in on one corner by more than 2 inches and out on a different corner by just under 3 inches. It does not show in the finished product, though, because the firm faired out the walls to make up for the difference.

The project added 1,100 square feet to the existing house with a fifth bedroom, home office and two bathrooms. Sneaking two bathrooms into this renovated space and the mechanicals down through the original timber framing also proved to be quite an accomplishment because there are not many ways to get through and past those original timbers in a fully finished home, Platt says.

Thanks in large part to Polly Lewis of Lewis Interiors, the third-floor interior space exudes the same level of elegance as the rest of the home but with dramatically different proportions. Most of the new space has a ceiling height of 10 feet, 2 inches. The team achieved what the owners desired: getting some relief from the low ceilings and elegant space for everyone. The change in the second-floor hallways and the incorporation of a third-floor dormer in the new hallways have a dramatic and calming effect for the center of the home.

“I actually got a call from the client maybe six months [afterward], which was just after COVID [began], and they just expressed how appreciative they were and how well the space was living,” Platt adds. “The way that Sally designed the staircase and the rear dormer, it just made the whole second-floor hallway really bright and, again, it provided a lot of relief to the low ceiling heights.

“It created an elegant staircase and entrance up to [the new third floor], so that it really feels like it’s all a part of the [original] house,” he continues. “This is not walking up to the attic anymore.”

From beginning to end, the project spent two years in planning because of the complexity, cost and logistics. Due to the high-stakes structural obstacles, it can be easy to forget the exceptional interior finishes like the high-gloss blue office, which became an exercise in super-flat surfaces and excellent preparation, Platt notes.

The client, the president of a large international company, has been thrilled, especially with the work-from-home world that coincided with the completion of the project.

The owners are now planning their next project with Platt Builders, “which is always the highest compliment from a client—they want you back,” Platt says. QR