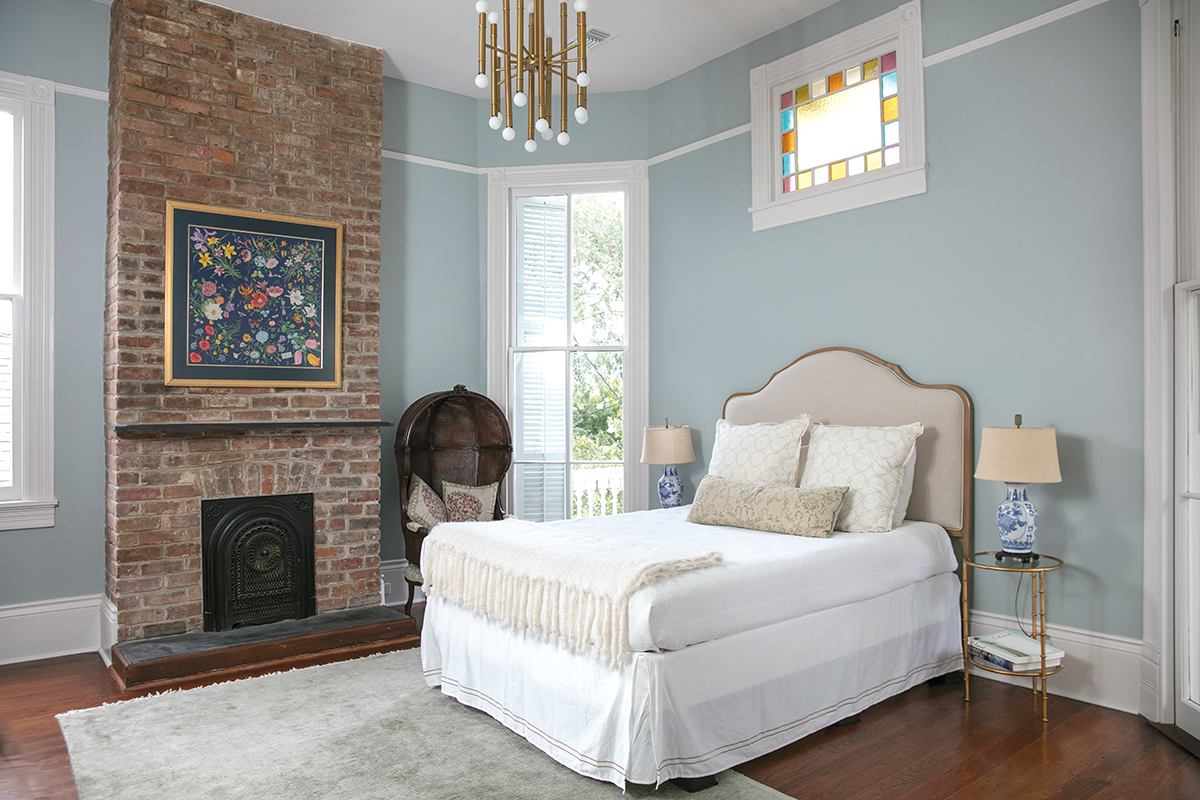 Built in the late 19th century by a wealthy lumber baron, this historic home has had only two owners after the family that built it, including the present owner who hired Entablature Design-Build for its restoration and renovation.

Chris Kornman, principal and head of day-to-day operations at Entablature, says the home remained in the original family for many years and was in very good condition, with many of its original details. “They took really good care of it, which is rare in a lot of New Orleans homes,” he says. “Almost every house we work on is 150 to 200 years old, and they’ve typically transferred hands so many times that many of them have been stripped of their historic character.”

The owners, a young couple, sought out Kornman and team upon buying the home with “a very clear desire” to preserve and restore the home—and to modernize its kitchen and bedrooms, all while bringing the plumbing and electric up to current code. Though they weren’t expecting a child when they bought the house, over the course of the restoration they found out they were pregnant. As a result, they sought to remodel the upper level to reflect their needs as a growing family.

First came modernizing the kitchen. The existing kitchen was part of an addition that had been built in the 1960s or 1970s. It was in pretty bad shape, especially compared to the rest of the house. They also wanted to update their master bathroom. The project would take on two of the most important areas of any home.

“They may live there forever, but if they ever need to sell, you want a great kitchen and you want a great master bath,” Kornman explains. The couple also sought to bring the plumbing and the electrical up to code, both of which were severely out of date. There was no central air in the house and no insulation, making it very hot in the summer and very cold in the winter. Further, they also needed more storage spaces in the home.

“There are very few closets in old New Orleans houses, so we had to figure out how to create closets and storage without destroying the floor plan,” Kornman says. Creating the additional storage fit together with redesigning the second floor and the way new storage areas impacted how the bedrooms flow into one another.

Lastly, and equally important to the clients, was to preserve the original 19th century architectural character of the home. “It’s very rare that we’ll have a client who is renovating an old house, and they’re not interested in preserving anything; that’s probably not a client we’d take on,” Kornman says. “There are cases where the details have already been stripped out of the house, and so it doesn’t matter; but in this case, all the character was still there, and this (desire to preserve it) was above all the other goals.”

The clients came to Entablature with their desires for the home but lacked an architect to execute them. Kornman directed them to MZ Architecture & Design, a woman-owned and woman-focused design and architecture team with whom Entablature has a long history of working.

“The owner [of MZ], Jenny Zurich, lives near this house,” Kornman explains. “Jenny and I both live in walking distance and opposite directions of this house. We would see [the clients] literally every day in the neighborhood. So I think that gave [the clients] a level of comfort that the relationship would extend well beyond when construction ended. They knew we would always be there for them and stand by the house and the construction.”

Having a long working relationship with MZ meant the two teams knew and understood each other’s experience. “They understand we’re bringing an expertise to the table about how to make their vision happen within a historic home. We know they’re very sensitive to how to preserve [old homes], and [they valued] listening to the contractor,” Kornman says.

Right away the two teams got to work on the client’s goals. MZ developed a few basic schematics that Entablature, as the contractor, carefully reviewed how those schematics would impact the budget or their ability to preserve certain aspects of the home. “There’s sort of two buckets of goals,” Kornman explains.

“There’s budget goals, and there’s design goals. We take everything the client tells us and put them in those two buckets and figure out how to balance them. One idea may really destroy the budget goal, or one idea may destroy the design goal. We just try to achieve that balance to get to the schematic that works. From there we flesh out the design and turn it into construction documents and then to fuller, line-item estimates. Then we start construction. So there’s a pretty lengthy collaborative approach until we even get to the point that we’re ready to start construction.”

As a major renovation that would touch every element of the house, Kornman was hyper-aware of the extant features of the house they wanted to preserve—namely, the plaster crown molding and all the wood details. “It’s not common for a lot of those plaster details to still exist,” Kornman says. “Plaster medallions, plaster crown, they’re typically deteriorated, or they’ve been torn out and replaced with drywall. But in this case, everything was well maintained.”

This also included the original door hardware, all the original wood flooring in place, and the original mantles. “Of course, even though it was well maintained, it still needed a fair amount of preservation.” Because of the crown molding, replacing the electrical and the plumbing became more of a challenge.

The team decided to open the walls to the point where the crown molding began and fished wires up through the cavities. All the duct work went under the house and up through chases in closets. The same process was used to replace the plumbing throughout the house.

The places where the crown molding needed repairs was tackled by local plaster artisans, who Kornman says have worked on many homes in the area—to the point where they often have molds of florets and leaves common to the plaster medallions of the area.

Because the addition was built after the 1950s, they did not need to get it cleared with the local Historic District Landmarks Commission of New Orleans to tear down and replace it. The house, in a partially controlled district, wasn’t subject to review because they did not make any major renovations to the exterior of the house and were building within the same footprint.

Besides the addition, the exterior work that was done included repairing and replacing rotten materials, which Kornman says the HDLC was excited to see. “If we were in a fully controlled district, which we often are, there’s a whole additional layer of permitting and drawings that are required for the approval process, as well as another layer of city inspections.”

When it came time to specify the insulation, Kornman and the team had to be very careful with how they approached it. “Houses in New Orleans were built to naturally breathe, so you can’t just go foam a 150-year-old house because you’d be disrupting the way it was originally meant to manage moisture,” he says.

Like most houses in the area, the house was built using cyprus weather boards nailed directly to the studs with no weather barrier. In this case, the plaster walls acted as insulation and allowed the moisture and humidity— which are especially high in New Orleans—to move in and out of the house. Additionally, there was no insulation in the floor, with old pine flooring nailed directly to the joists and no subfloor.

“People think they can just put a bunch of [batting] under the house in the cavities between the joists,” Kornman notes. “Well, those bats are going to act as a sponge and just soak up moisture. That moisture will get trapped between the floor and the bats and rot out your floorboards over time. And that attracts termites. So having no insulation there is [much] better than having bat insulation.”

The team discussed air-conditioning options and the impact that keeping the original single-pane windows would have on the system. They settled on using closed-cell foam under the house, which stops the moisture driving into the house, and rigid foam board inside the wall cavities, creating 1-inch air gaps to create a drainage plane and insulated value.

“Because we kept the crown molding, we had to tuck [insulation] up into the ceiling. Is it the tightest insulated house? Not at all. Is it better than what it was before? Yes. Those are sort of the give-and-take [decisions] that must play out with any owner in any house.”

Selecting where to install the air-conditioning unit was an additional challenge. They couldn’t put it under the house because of New Orleans’ flood regulations. Instead, ducts were routed under the house, and they put in floor grills, so they didn’t have to disturb the ceiling and its original plaster details.

“On a new-construction job, you can have a set of plans and send it to a contractor, and they can put a number to it,” Kornman says. “We don’t operate that way [with old-house renovations]. That’s not the kind of construction we do. There are just so many things that interact with each other. You don’t have a blank slate like you would with new construction. There are a lot of limitations to work through and problems to solve at the beginning and not in the middle of construction.” QR