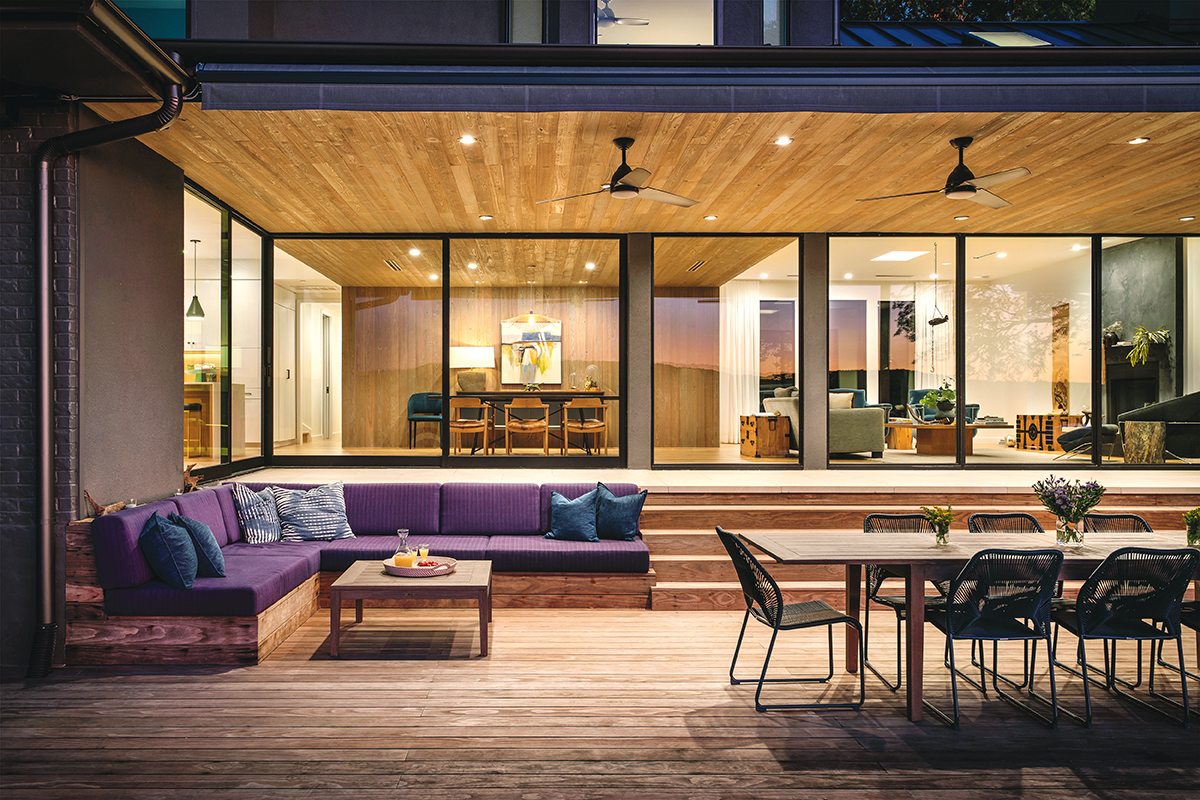 After moving to Austin, Texas, a family from New Jersey encountered a snag: They appreciated their new property and its picturesque views but hated the house. With outdated finishes and an archaic configuration, the residence required a thorough rethinking. In search of a solution, the homeowners reached out to Clark Richardson Architects, an architectural design services firm. 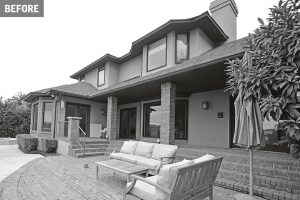 “In Austin the market is really competitive, and so I think a lot of people who move here end up getting into a situation where they might be bidding on multiple properties, but they don’t always know what’s going to happen,” says Ed Richardson, who formed the company with partner April Clark in 2009 following years of collaboration. The two met in graduate school at Yale in 2001.

The existing layout prevented interaction among rooms and blocked expansive views of a river below the house and the hills beyond it. In particular, the kitchen had been tucked away next to the front entrance and suffered from chamfered corners and a lack of windows. The two existing windows, moreover, looked out into the front yard and did not take advantage of any sight lines. 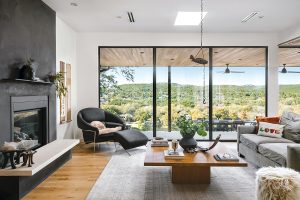 “We see this a lot in whole-house renovations,” Richardson explains. “It might have been a plan that was applied to the site—instead of something designed specifically for the site—or maybe it was just a little outdated in how it thought about things. But the big push of [our] design was to take that kitchen and move it toward the back of the house, in a much more prominent position.” 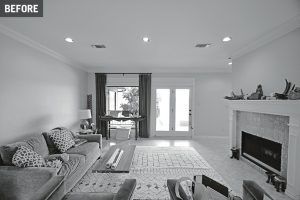 Establishing a transversal axis created connections between the three principle communal spaces of the home: living, dining and kitchen. The maneuver also helped clear up the encumbered entry axis, so anybody who enters the house can see through to the attractive landscape. Uninterrupted floor-to-ceiling windows and a corner sliding door seamlessly join the interior with the outdoors.

“When you walked into the [existing] house, there was kind of a formal sitting room with just a couple of smaller doors that looked down into the view,” Richardson says. “Beyond that was a bit of a warren of different rooms that were not flowing together. What we wanted to do is open up that first-floor plan and cross-connect all those spaces that had the view [of the landscape].” 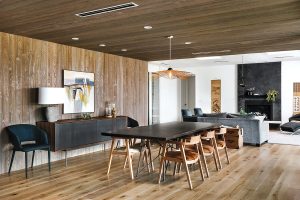 Relatively low, 9-foot ceilings made the task even more difficult, although an abundance of glass now eliminates any compressed feeling. “They just wanted to wrap the house around the outdoor space and have a less formal approach to the entertaining space, where all of the spaces kind of flow together. That’s what they were looking for, from a lifestyle standpoint,” Richardson notes. 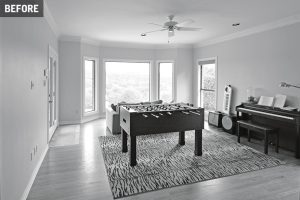 The company redesigned the existing deck to function as a belvedere to the river below, with the roof extended far out to provide shade and a sense of enclosure. “We had to take the roof off and demolish the slab work that was outside the house. The original design had heavy brick columns and steps that wrapped all around, making it hard to inhabit as a space to sit and enjoy the view.

“We thought a lot about dropping the elevation from inside to outside, with the idea that if you can have this 3- or 4-foot drop, then all of that outdoor furniture and entertainment space is not hindering the view,” he adds. “So, you come out and have this transition down to entertainment space, and that [allows you to] be clear sectionally from [and not block] the view from inside.”

The existing building had a series of substandard construction issues, mainly in the fit and finish of materials and systems, that had to be corrected. Structural considerations were taken to open up the living spaces without affecting the original footprint of the home. On the second floor, a new game room with ample area for the kids to play added valuable square footage to the house. 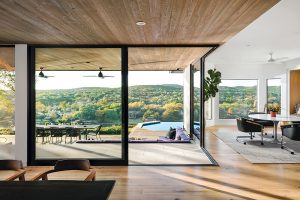 “It’s a game room, but it [also] became a sort of second living room up there for them; they even had desks up there where they could do homework,” Richardson says. “We had to stack that on the floors below, so we did have to take the roof off and all of the ceiling framing and redo that space almost down to the slab, but we [only extended] an existing roof line on the second floor.

“Most of the heavy lifting in terms of structural was in opening up that dining and living room space,” he notes. “We had to under-support all of that floor framing. [Above the] corner sliding door, there’s a big 36-inch steel beam that spans all the way across the space to support the floor above it. That was probably the biggest move we had to make. [The beam is] largely concealed, but that’s what enabled that space to be opened up with the existing second floor left in place.” 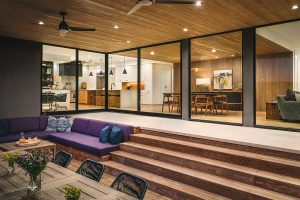 As part of the renovation, the company gave the principal bathroom suite a spatial transformation to provide comfort, efficiency and luxury. Modern fixtures and plenty of cabinetry were added to maximize style and storage. The homeowners stayed engaged throughout the design process and even pushed for the main corner slider, so they could open the interior to their new outdoor space.

“They had a strong preference for a lot of darker finishes in the house,” Richardson says. “They [also] had a lot of ideas about materiality. We talked about this idea of wabi-sabi, or things that show the presence of the hand and a kind of craftsmanship that is visible in modern forms. That was something they were interested in. For instance, the hood that’s on the oven in the fireplace, it’s hand-finished plaster and something that has texture, but it is very modern at the same time. 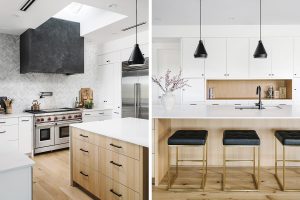 “They were interested in that contrast—the visibility of imperfection,” he explains. “The wood wrapper that’s on the dining walls and ceiling, that was a custom-made stained wood that was done specifically for this project. It was something intended to be more rustic. It was actually a wire-brushed wood, which we don’t really do a lot of, but it’s something that we contracted out directly with a local wood-flooring company [in Austin] for the project, which is always neat.” 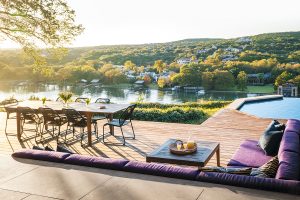 To improve energy efficiency, the company installed new exterior and roof insulation along with new window packages. A high-SEER heating and cooling system and LED lighting help reduce energy usage for the homeowners as well. The broad overhang the company constructed above the redesigned outdoor living space in the back of the house, furthermore, decreases solar gain.

“It’s sometimes surprising to people how much you can do [in a remodel] and keep an existing structure,” Richardson says. “There were a lot of elements that were kept in place, but it’s just day and night in terms of how the house is used. It’s a beautiful house, but it’s very functional for a family. [The clients] both work from home, so I think it’s been especially great for them. 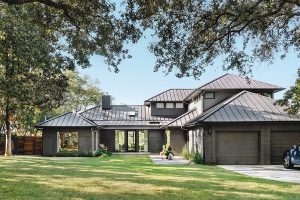 “It has generous living spaces, and it has pretty generous bedrooms. As a firm that does a lot of projects for families, we think a lot about back-of-house spaces as well—things like mudrooms and laundry rooms, closets and storage,” he adds. “All that stuff really does make for successful projects, too, but they’re not always foregrounded in discussions [people have about a project].” QR