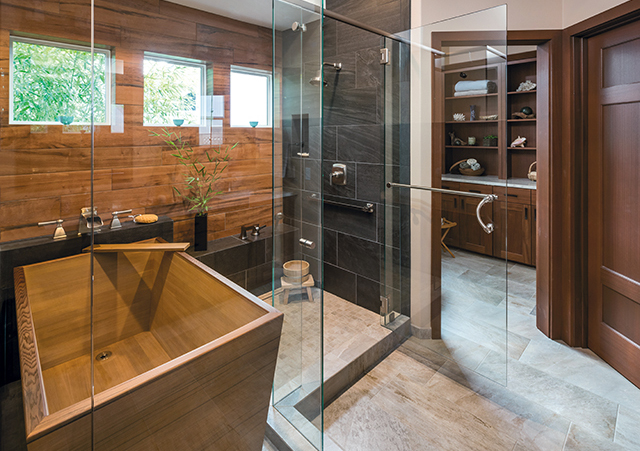 After moving into their final house, retired homeowners in Durham, Oregon, decided to remodel the bathroom into a retreat they always desired. The wife grew up in Japan and had always wanted a true Japanese bath, and the husband enjoyed using her family’s bathroom during their visits to Japan. They had found their true “forever home” and turned to the Neil Kelly Company. 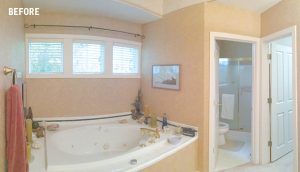 “She grew up in Japan and he was in the Vietnam War, but he was on temporary assignment in Tokyo,” says Byron Kellar, project designer at Neil Kelly. “After he left the service, he brought her to America. She’s close to her family [though], so they travel back and forth once or twice a year. Her family has a traditional bathroom setup, with the soaking tub and all the ritual stuff.”

The company had done a few soaking tubs over the years, including Japanese tubs that look like narrow half barrels, Kellar notes, but nothing as complete as this project. Providing an authentic Japanese bathing experience within the confines of a traditional western-style home—while also meeting the current plumbing and building codes—would soon become their primary challenge.

One of Kellar’s colleagues at Neil Kelly lived in Japan for a few years and had done versions of a Japanese bathroom, which helped inform the project. The design team, moreover, read books and researched the Japanese style of bathing, so they could have candid conversations with the clients about what they sought and what was important to them—to honor her heritage but also accommodate their western way of life.

“He’d go into the historic aspects of it [and] talk about the cultural ramifications,” Kellar recalls. “It was a great learning experience. We spent a lot of time talking upfront, looking at options and looking at materials—and seeing where things could go and what we were trying to accomplish.” 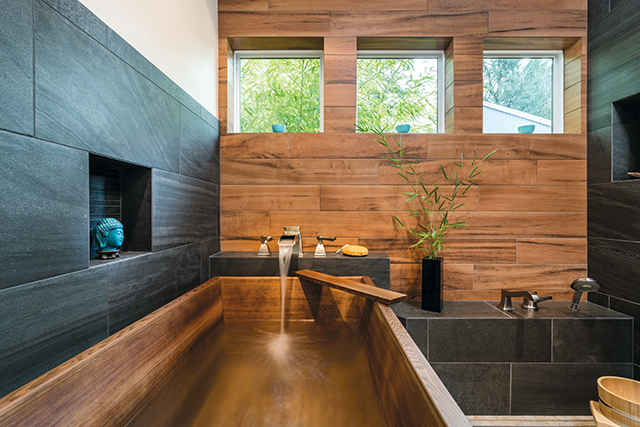 Traditional Japanese baths often include a small bench for people to sit and wash themselves before getting into the soaking tub. They must not bring any soap with them, however, so they need to rinse off completely first. A faucet and handheld shower at the bench, as well as a small bucket, would suffice. At the same time, the homeowners requested a separate, stand-up shower to enable them to bathe more quickly.

The existing bathroom, built in the early 1990s, featured a 4- by 6-foot spa tub sunken into a big platform with a tile surround. An adjacent room housed the shower and toilet, and the dual vanity lacked appropriate storage or lighting; as a result, the clients were not able to use the vanity mirrors comfortably because they have about a foot of difference between their heights.

“Another aspect of their lifestyle is that the house is always spotless, so the idea of not being able to get behind the tub to clean was an issue,” Kellar adds. “How do we deal with that? How do we deal with an overflow [from the tub] and the drain assembly—where it’s attached and how it works?”

The homeowners wanted a bathtub large enough for him to stretch out in and yet low enough for her to enter and exit. They were pleased with the custom cedar Ofuro tub from Zen Bathworks, a manufacturer in Alaska. The design team opted to allow the freestanding tub to simply drain onto the tile floor, which raised the question of whether they should have a curbed or curbless shower.

“Depending on which jurisdiction you’re in, some will require that if you have a curbless shower you would have [to start the slope] at the bathroom door and go to the drain, and that really can create a nightmare,” Kellar explains. “That’s primarily why we went [forward] with the curb in.” 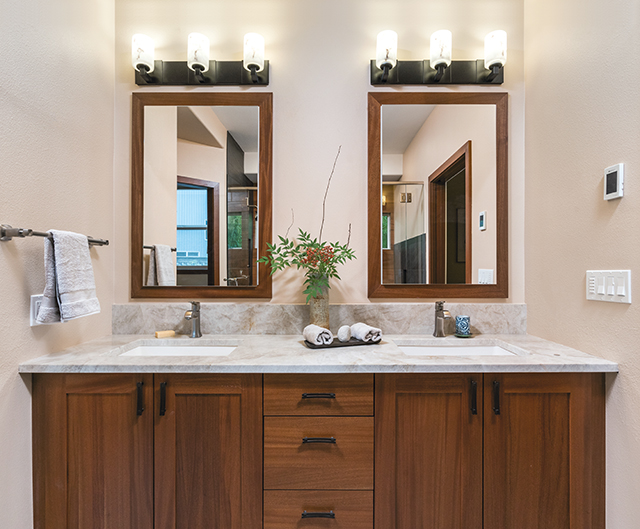 To minimize the amount of slope necessary, the company installed a linear drain near the bathing bench and shelf to collect water from both the tub and shower. The stand-up shower incorporates a slide bar so the showerhead can be adjusted for different heights. The bathing shelf includes its own faucet and handheld shower as well. The soaking tub utilizes a rustic picture-style tub filler mounted on a raised shelf and not connected to the tub.

“We tried to accommodate all those things [and] keep them all in one wet space,” Kellar says. “If you notice, there are actually two shower doors—one opens up to the tall stand-up shower, and then the panel that’s directly in front of the soaking tub also opens up. You can get behind it and clean, and you can actually move the tub out of the way if you want. It doesn’t weigh a lot.” 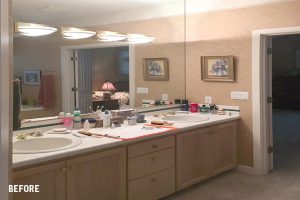 Running black tile all the way up to the ceiling would have made the space feel too much like a cave, he notes; therefore, the design team played with different heights to offset the black tile on the shower wall. Their tile setter mitered the corners of the wood-patterned, porcelain tile to wrap into the window jambs and replicate the appearance of real wood.

The company reviewed more than 50 different tile samples to find the color and grain pattern that would blend with the wood tub and cabinets. Custom-height vanity cabinetry as well as taller, recessed medicine cabinets that were properly set enable the clients to use the vanity mirrors comfortably. Perla Venata quartzite countertops help bring an organic presence to the bathroom space.

Although the homeowners might display a few pieces of Japanese art, Kellar says, the interior of their house embraces northwest contemporary architecture. Key components of the style include exposed columns, high ceilings and large, open spaces. The design team needed to find a way to combine the more traditional western style with a Japanese-inspired bath. 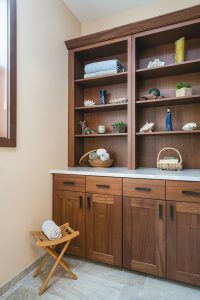 “They’ve got some rounded columns in the kitchen. All of the windows are white, [and] all the woodwork is white. There’s nothing about it that would say Asian,” he adds. “Typically, we try to make the project fit the character of the house, but that wasn’t going to happen [in this case].”

Converting the swinging door of the master bathroom into a pocket door allowed the company to apply different treatments to each side. The bedroom side matches the white-painted raised panel doors seen throughout the rest of the home, and the bathroom side reflects the stained-wood, recessed panel doors utilized in the master bath vanity cabinets as well as display cabinets and woodwork.

“When I talk about walking through a portal, it’s not something I normally like to do; but in this case you look at that door, and it looks just like the bedroom door—white painted, two panels—and you open up the pocket door and you just step into a different world.,” Kellar explains. “And that’s how we got around the issue of a swinging door—either way the door opened, in or out, there would have been paint on one side and stain on the other side.”

The clients, who had never embarked on a major remodel before this project, have been thrilled with the bathroom, he notes. “It just doesn’t get much better than designing and building high-quality work with a great client. They appreciate your work, and they just love the result. They use it as it should be used—a retreat for relaxation. I wish all my jobs were like this [project].” QR