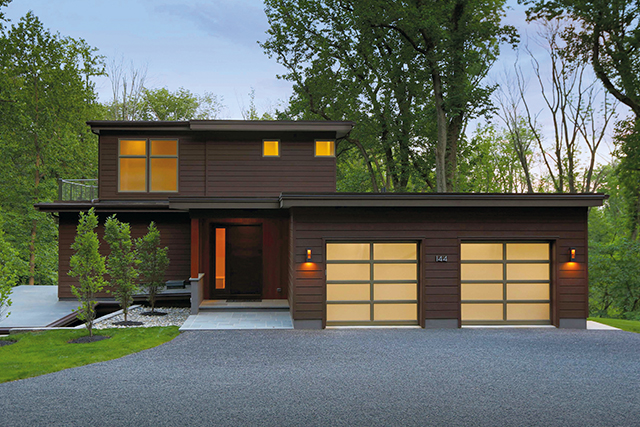 Often real estate agents in Princeton, New Jersey, will ask architect Kevin Wilkes to preview a home with them and give advice they can use to sell the property. After touring a Usonian-style house built in the 1960s, Wilkes told the agent it would require extensive work. The agent lined up a couple of interested buyers, nevertheless, and they each had a consultation with the architect.

“Unfortunately, in both cases after I was done, the people went running over the hillside, and it languished on the market,” says Wilkes, who founded Princeton Design Guild in 1985. “I kept thinking about it because I knew it had a lot of potential, but it was encumbered with wetlands restrictions; it had very steep slopes. And that’s before you even look at the decaying building.”

Wilkes told a friend who flips properties about the original home and beautiful lot, and he made a modest offer to the daughter of the professors who built it. After a back-and-forth conversation over the course of a year, she agreed to sell the property. With more than 35 years of experience, Wilkes had turned around some pretty miserable homes—and this project would be no different.

Designed by Allan J. Gelbin of Connecticut, an apprentice of Frank Lloyd Wright at Taliesin East, the house sits on a 3-acre lot on a ridge that faces south. The home originally contained three bedrooms, two bathrooms and a galley kitchen behind a joint dining and living room. J. Robert Hillier designed the addition on the north side of the residence in 1971, Wilkes notes. 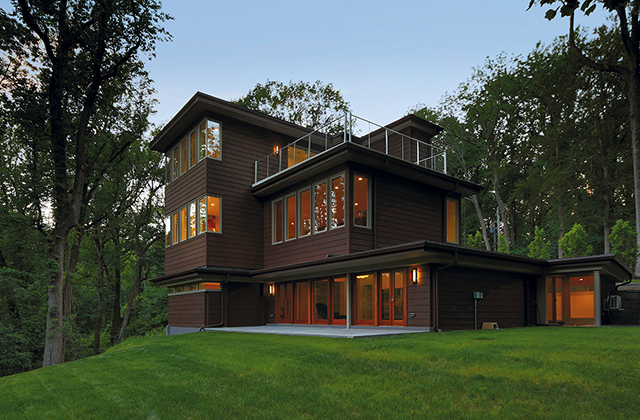 “It has a modest pedigree; it’s not a super-famous architect, but it was a man who studied under Frank Lloyd Wright. And he had a very solid career in Connecticut in the middle of the 20th century,” he adds. The professor couple who commissioned the house lived there from their 50s into their 90s and then departed for nursing care, leaving the property bereft of proper attention.

While many people figured the home would be a teardown, Wilkes recognized the integrity of the original structure and became resolved to salvage it. Building new would also sacrifice the initial modest side-yard setback; since the 1960s, the municipality “downzoned” setbacks from 10 feet to 50 feet to combat “McMansion sprawl,” he says, so half of the house did not conform. 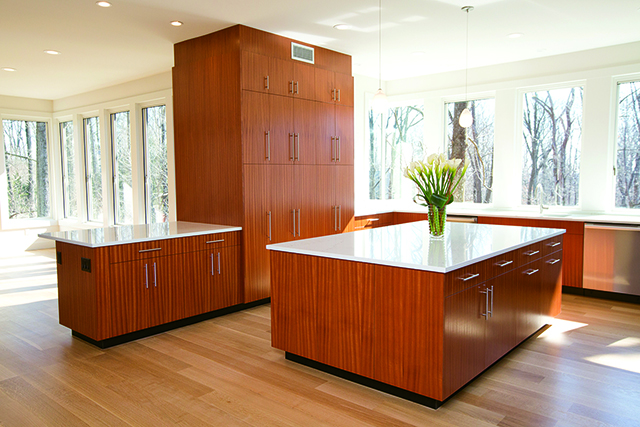 This decision also made the property’s encroachment into the wetlands on its western edge fairly minimal. “There’s a 300-foot buffer,” he says. “We were only encroaching 20 feet or so into that, so the [New Jersey Department of Environmental Protection] granted us a permit to build a new septic field in the wetland buffer. Whereas if this were a new project—a new house—it’s not clear that they would have [done so].”

Adding new living space on top of the existing one-story home produced a three-level residence that takes advantage of the scenic southern views and does not expand into the prohibited eastern setback. Working with JT Engineering, the team put the load of the two new floors on a steel superstructure poised above the original house to prevent any weight on the wood-frame structure. 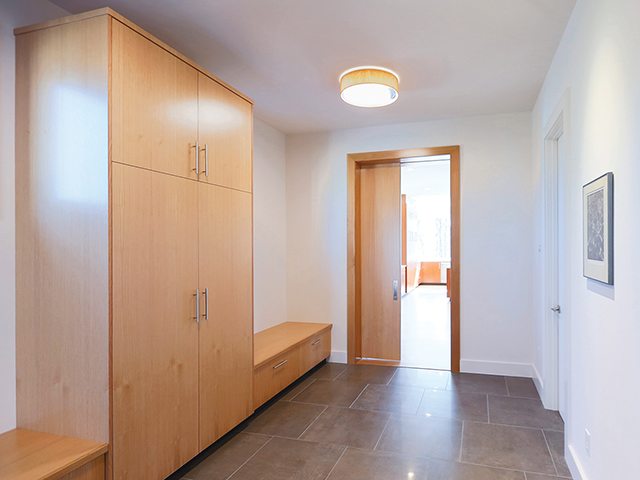 “The site slopes steeply—about 40-feet-plus to the south—so there are great views to be captured to the south and the west, but that one-story house was tucked into the hillside,” Wilkes explains. “It was immediately obvious to me the [right] move would be to lift it up into the air and do that by adding two stories on top of the one that existed. The existing one-story was framed with 2x4s and 2x3s—and 2x6s and 2x8s in the roof—so there was no way you could place any load on it.”

He describes the steel superstructure as a spider “to perch above that house and straddle on eight-point loads around its perimeter.” The firm rehabilitated the original home—now the ground level—and retained existing siding and window locations (replaced with efficient glazing) and reconceived the plan as three bedrooms, two baths and a family room. 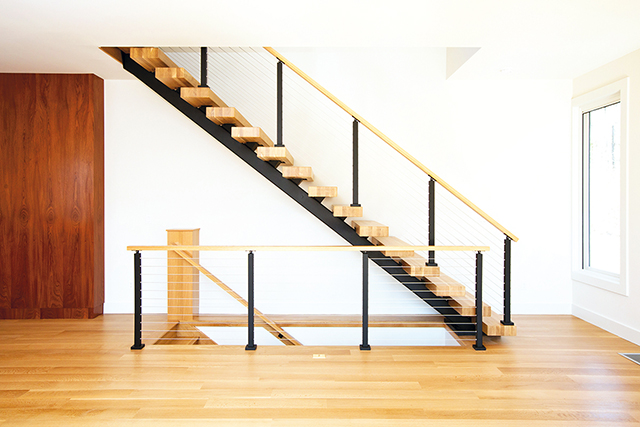 “It was an arduous process of digging; it required brute force, and we had to modify some of the dimensions to make that ground floor work,” Wilkes adds. “Once we had the steel superstructure fabricated, brought to site and erected, it was fairly straight flying. There were positional issues and some things we had to nudge a little here and there to get the layout to work as best it could.”

The firm did add a mechanical room and a laundry room to the north side of the ground level, as well as some hidden service space underneath the new entry. “The roof on the south side is 45 to 50 feet up in the air—way up there,” he says. “There was a lot of careful pump-jack work and scaffolding work. We spent more time setting up and dismantling than we did setting windows.”

Wilkes stripped everything inside the original house, spray-foamed the walls and put up a vapor barrier to the earth, although he kept the original siding because of its integral look. He specified a poly-ash product for the new exterior siding above but changed the five-quarter lifts on the 7-inch exposures to a five-quarter gap or recess, so the shadow lines match up despite the difference in siding materials. 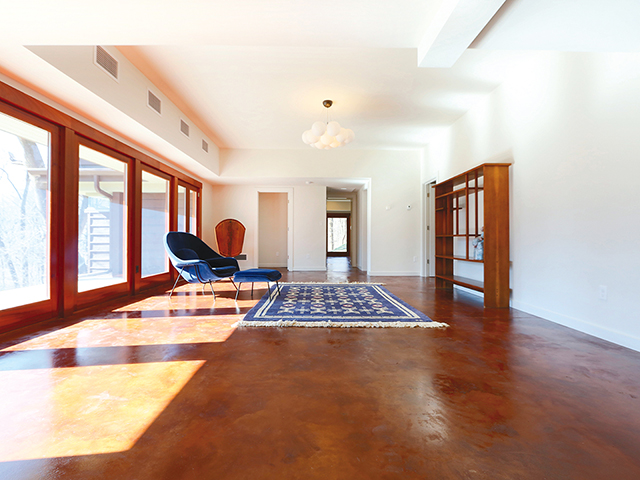 “The poly-ash product is completely rot-resistant. This home is in a forest, and the original house had significant carpenter-bee damage, so I was pretty determined to put something up that those little buggers can’t drill through,” Wilkes explains. “I wanted something that looked interesting in the dark-green forest in summer, but also now [when] it’s completely bare and naked brown.” 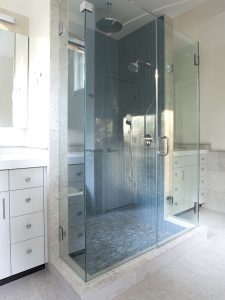 He opted for a copper-rust, brown color scheme that works well with the dense greens present in summer and the browns and grays in winter. “It’s an interesting site because it changes feeling so dramatically throughout the year; in the summer, it’s like you’re in a treehouse looking out, and in the winter, you’re on the bow or bridge of a ship after all the leaves drop, looking at treetops.”

The central, open living spaces of the four-bedroom home reside on the middle floor and can be accessed directly from the north driveway and new two-car garage. This gathering area features 10-foot-tall ceilings and is warmed up by the pommele, plain-sliced and ribbon grains of Sapele paneling and cabinets. The new third level above comprises a master suite and ample roof deck. 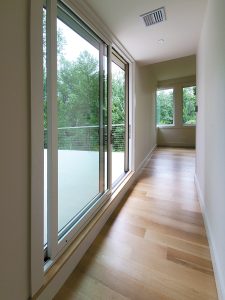 High R-value, closed-cell spray foam helps improve the energy efficiency on all floors, as do the EnergyStar appliances throughout the house. Replacing the old boiler with a high-efficiency one that supplies both the hydronic radiant heat and hot water upgraded the heating system. The new air-conditioner has a 20 SEER rating with 13 zones.

“It’s got remarkably low heating and cooling bills,” Wilkes says. “The heating bill in the cold month of February last year was $215, and that’s keeping the whole house at 68 or 69 degrees—three stories with a lot of outside wall exposure.” QR