Platt Builders and Kurtz Design Studio collaborate to transform a century-old barn into a garage and apartment while maintaining the original structure’s design integrity. 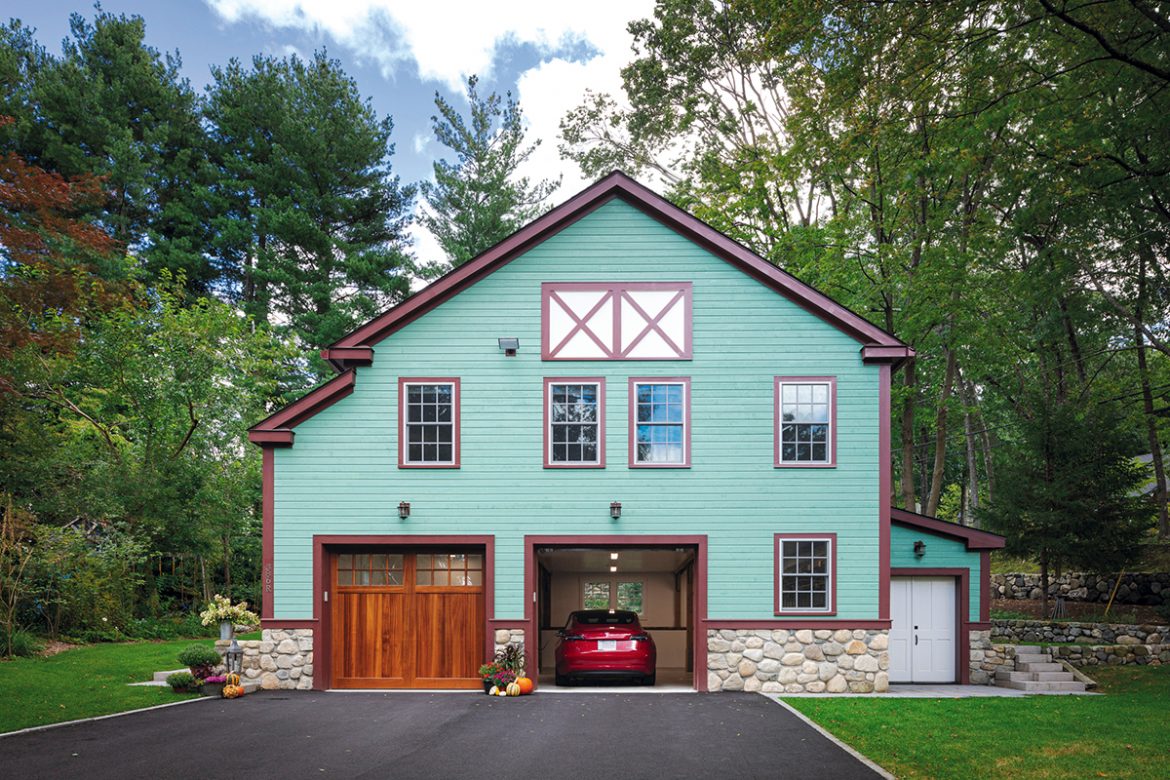 When the client was biking through her Massachusetts town, she saw one of Platt Builders’ signs in front of a neighboring home, and she was struck by how neat and clean it was for a jobsite. She immediately told her husband to call them. He’d already interviewed 19 remodelers and general contractors and whittled the list down to two, but he wasn’t completely comfortable with either one, so he contacted Platt Builders.

From a design standpoint, the clients had already presented their ideas to Jason Kurtz, principal architect at Kurtz Design Studio, LLC. This was 10 years prior after seeing Kurtz’ design for a nearby house.

“[The client] talked about wanting to do a full renovation of the barn, and we started the process of doing some of the design stuff for it; and then the whole project got shelved for a few years, until he reconnected with me and wanted to finish out the project,” Kurtz recalls.

The clients had renovated their main house 10 to 15 years prior and wanted specifically to be able to age-in-place in their home. They had a beloved 80-year-old barn on the property, where the two had been married 30 years earlier. They wanted to create a modern garage, complete with a well-insulated second-floor apartment within the original timber frame structure.

They also wanted the apartment to accommodate future live-in help if that’s what they needed. The apartment could also potentially allow them to live comfortably in the barn while one of their children or their children’s families lived in the main house.

In addition to creating an apartment to facilitate aging-in-place, the clients also sought to have the garage outfitted for electric-vehicle charging, which meant substantial electrical wiring. Upgraded insulation would be needed throughout the structure.

Right away, the project was subject to zoning laws, which stated that only a certain percentage, or a maximum of 1,000 square feet, of a home could be a detached structure, whichever happened to be smaller. The clients originally wanted the whole footprint to be expanded, but limited by the zoning laws, they ended up primarily maintaining the existing footprint.

“I think we went through five or six different rounds of design concepts,” Kurtz says. “And each round usually had two to three designs as different as possible. Typically, I try to come up with design concepts that are polar opposites, so we can have an open discussion about the positives and the negatives and then go into the next round trying to blend all those positives into a couple more designs.”

The footprint ended up expanding 7.5 feet on the lefthand side of the building. “We had plenty of space on the right, but that’s where the yard and gardens were (located),” explains Halsey Platt, owner of Platt Builders. “One of the challenges really was the driveway—it was reasonably steep when we started, and the client was concerned about snow and ice in the winter.”

The clients, in their 60s, wanted to be able to access the garage and the house easily during cold and snowy New England winters, so Chris Brown, director of production for Platt Builders, lowered the entire barn floor by 18 inches so that they could reduce the pitch of the driveway to prevent slip and fall hazards.

“That was definitely a significant challenge. How do we hold up the existing structure, take out the existing support beneath the center of it, and then replace it and keep all of our workers safe, while also doing it in a cost-effective manner?” Platt says.

The Platt framing team, led by Billy Dawes, braced the existing structure and extended the center posts by creating custom-made galvanized steel brackets. This allowed the team to lengthen the posts down onto new concrete footings. That then allowed the team to continue to hold up the structure while removing all the temporary bracing.

In drawing up plans to boost the barn’s insulation, Platt ran into a new challenge—the homeowners did not want spray foam used.

“We were able to have a very competent conversation with them about what mattered to them,” Platt says. “And when renovating an old structure that has dissimilar framing sizes, spray foam is a really easy solution. With closed-cell foam, you’re going to get a phenomenal air-seal and thermal performance, but the client did not want to use spray foam because of their concerns about integrity, degrading the environment, and the off-gassing.”

This led Platt and Brown to discuss with the client what other options were available to insulated and seal the barn. Eventually, Brown found a material called ThermalBuck, which then gave the builders a structural way to move the windows out for a thickened wall and still have an excellent thermal barrier. ThermalBuck extends the mounting point for windows and doors and insulates the rough opening to limit thermal bridging.

ThermalBuck is made up of a polyurethane/polyurea blend resin, and it does not emit volatile organic compounds (VOCs), something that greatly interested the clients. They also utilized 4 inches of rock wool for additional insulation around the entire structure, and 6 inches of rock wool on the interior of the roof before building the cladding on top of the rock-wool base.

When it came time to outfit the barn with mechanical and electrical services, it was important that none of the mechanical equipment required that the apartment communicated with the garage.

“When you’ve got a garage in which you’re storing vehicles, even though they had electric vehicles, you can’t have any air exchange back and forth between them for fire-code reasons,” Platt explains. “[Brown] ended up having a very, very well-planned mechanical system, so that it would all fit within the apartment space and not end up being an octopus of duct work that went outside of the heated envelope, because that’s a critical part of having a highly energy-efficient system.”

“The easy thing to do would be to put all the duct work in the ceiling below, if you think of a conventional house,” Brown says. “We didn’t have that option with finishing a garage. So, keeping it compact inside the space was the goal there.” The team ended up achieving an air sealing rate of 1.16 at -50 Pascale with a blower door test, compared to the new energy codes, which require a 3.

Because of where the plumbing and electrical was located, the kitchen had to be off the back of the barn. “I designed the layout, so it allowed for them to have that kitchen with a nice, big window. Then you have this large, vaulted living space and the bedroom and a den area,” Kurtz says. “Some of the stuff we had to accommodate for were also life-safety things.”

The team consulted with a structural engineer to adapt the exposed beams of the ceiling to accommodate headroom within the main space, as well as making sure the building codes were up to date with all the changes they’d made to the structure. An interior staircase was placed at the left side of the barn after much consideration as to where to put it. Then, because it is a residential space, a second, egress staircase was added to the rear as an alternative exit. They chose the back as it was only visible from a side street that bordered their land, and not from the front of the house.

One of the biggest challenges, Kurtz says, was reflecting the exterior elements of the main house onto the barn in terms of windows and materials and coloring, including the barn’s signature bright sea-foam green siding. “There was a cupola that originally we were going to do a couple of different things for; and in the end, I think when [Platt Builders] went to do the construction, they just lifted the whole thing off with a crane and put it back on since they were already using the crane in order to do some of the roof work.”

When it came to the design of the interior, the client was very hands-on. “[The husband] did a lot of the interior carpentry and finish work,” Kurtz says. Though the husband was not a carpenter or tradesman by any means, he was able to personally finish the cabinetry himself in addition to tiling the shower. Elements such as a barrier-free shower were put in place for transitioning the space into one where the clients would age-in-place with ease.

“At the end, the barn really kind of felt like it was supposed to be designed and built this way originally,” Kurtz says. “We really looked at the overall design in a way that encompasses all the different elements, the different materials. We wanted to make sure that the overall design really encompassed the original feel of the structure and make it seem like this was an enhancement as opposed to an addition.” QR