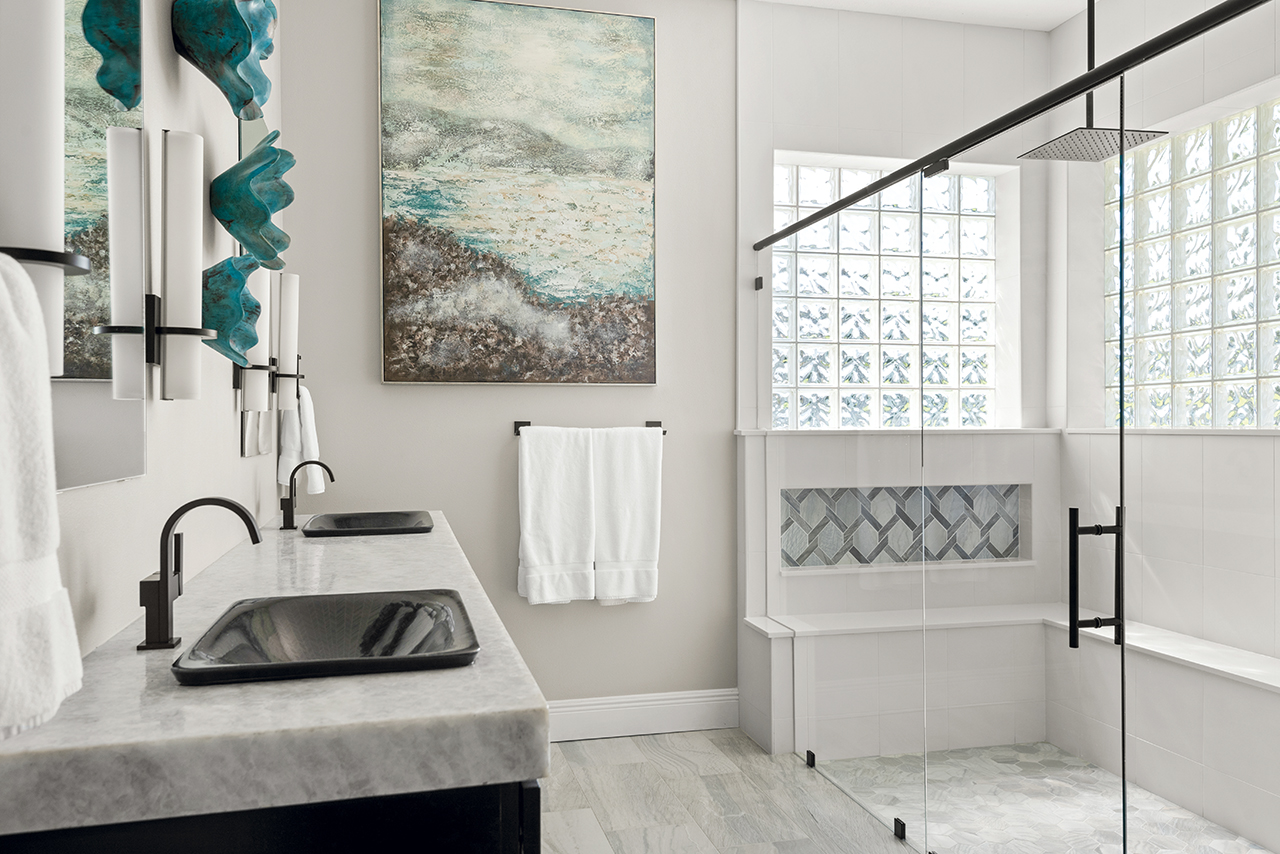 One year after remodeling his kitchen and main living-room area, a client in Melbourne, Florida, wanted to renovate his master bathroom. He liked all the ideas the designer, Lindsey Schwartz of S&W Kitchens, proposed and implemented in his previous project, so he gave her a “blank slate” to work with this time around, along with the budget necessary to complete a custom job. 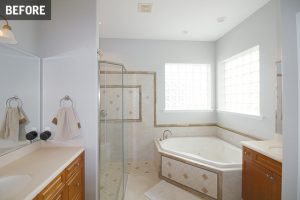 “Typically, a lot of people already have ideas of what they want,” Schwartz says. “It’s all about working with a client and trying to figure out what their styles are—what they like. And we had already worked together before, so he knew he liked my suggestions and what I put forward, and he wanted something custom. He wanted something [that would be] really cool and interesting.”

Because he did not use the bathtub, the client sought to remove it and reappropriate the space to create a larger walk-in shower. The current layout of the shower and vanities, moreover, needed to be reconfigured to produce a better flow and account for the corner windows. A new location for the shower drain and backlighting the countertop also presented challenges for the company.

Initially, Schwartz had considered extending the combined vanity into the corner with the pair of windows. The position of the toilet and the windows, however, compelled her to situate the new shower in that area instead. Installing the shower along an exterior wall as opposed to an interior wall meant she would need to cover the footer that would not allow her to recess the shower pan.

“I had to build in benches that are along the exterior walls,” Schwartz explains. “Not only did we want to add benches [within the project scope], but I added a complete L-shaped bench along the walls because there’s a footer inside that space. So, that bench is actually covering the footer and also creating [a place to sit down] at the same time. It kind of gave us a two-for-one in that sense. 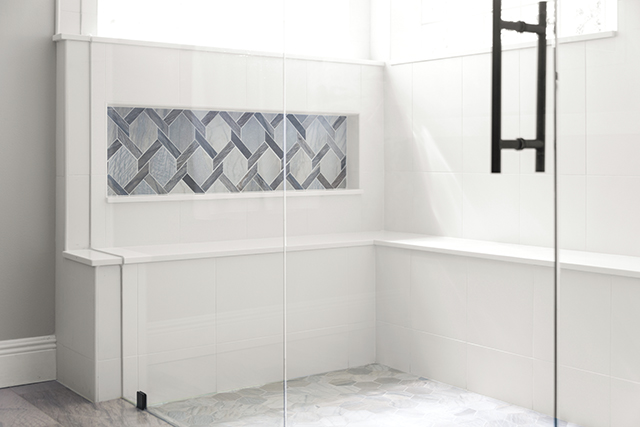 Moving the shower to a corner with two windows also deprived Schwartz of a wall to locate the shower head centrally. She opted to run it through the ceiling above and mount a rainfall shower head. The company installed a hand shower on the wall between the shower and the toilet room, as well, so the client could have more control and target specific areas of his body when bathing.

The double vanity itself did not require any special construction, but the client desired a “WOW” effect upon entering the remodeled bathroom. Schwartz chose to backlight the marble countertop with LED lighting, which necessitated the assistance of the electrician and countertop fabricator on every detail to make sure everybody remained on the same page on how to set it up correctly. 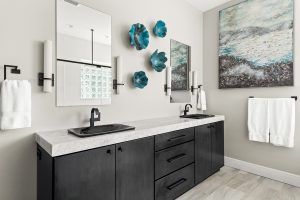 “There’s a lot that goes into making a backlight work properly—from the proper setup of sinks to making sure you’re not seeing light coming through the sinks,” Schwartz notes. “There’s also the overhang of the countertop where the LED panels are positioned on top of the counter, and the cabinets where you put the electrical, so the light panel is further recessed. The countertops are a mitered, 3-inch raised countertop. What that does is it allows us to have the lights actually come through the edge of the countertop. It just creates more of an impact [when you enter the room].”

After installing the backlight LEDs, the team began encountering interference with the LED can lights as well as the LED sconces. They went through multiple dimmer switches and eventually had to scrap the plans to dim the sconces because of compatibility issues. “We relied heavily on our electrician to help us through problems, but we couldn’t figure out why we had flickering.” 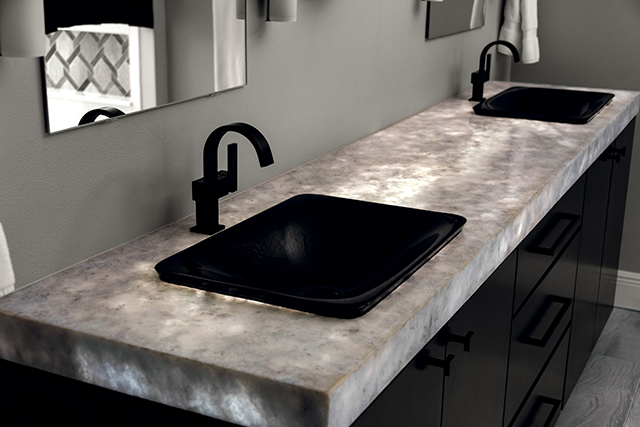 The backlit countertop perfectly complements the open, contemporary space and the higher-end finishes, although it might have been better served elsewhere in the house. “It creates a unique and fun night light,” Schwartz says. “Backlit countertops can be a great feature piece in other areas for more people to enjoy, like a bar area or kitchen island.”

A “blank slate” on the design allowed Schwartz to operate independently, for the most part, and check in with the client every once in a while. When they made their selection for the countertop and knew the color scheme, for example, she pulled some tiles together and presented him with a few options, she adds. As a result, they did not have to see hundreds of tiles or plumbing fixtures. 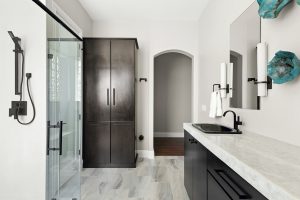 “Sometimes it’s hard when you don’t have clear direction from the client; but when working with somebody on something the second time around, you really know what they will and won’t like, and where you can push them to design,” she explains. “Some people aren’t as open to a lot of changes or unique designs. It’s just they’re a little more afraid of making some unique choices.”

Schwartz and the client have already discussed future projects, such as an outdoor kitchen area and the laundry room, while he enjoys his new bathroom. “He loves it: the open shower and to be able to not have the big corner tub taking up the space—and just the modern styling of it. It was a longer process for construction because of all the fit and finish. It takes more time when you’re working with anything custom. It takes time to put it together and put it together right.” QR