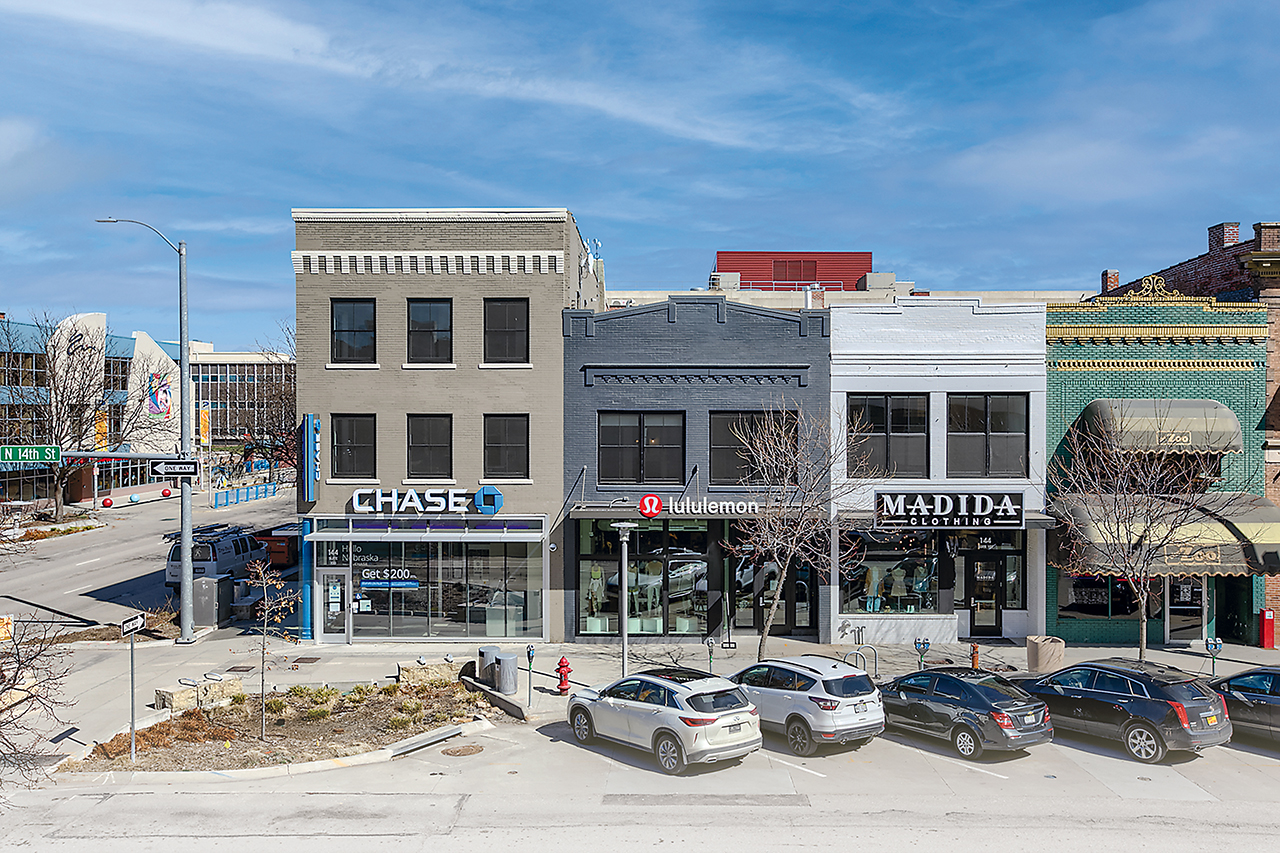 The buildings at 140, 144 and 148 N. 14th Street form part of a low-rise but densely developed urban block face between O and P streets in downtown Lincoln, Nebraska. Since the late 1950s, Sup Family has owned the properties and once ran a clothing store there called The Post & Nickel until 2018. While recognizing its sentimental value, the second generation of the family wanted to build out a real estate portfolio. 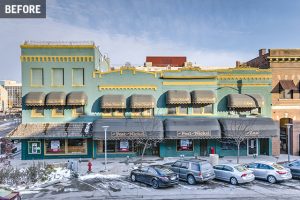 “It came in as a lead for a white box on 2,500 square feet,” says Jared Muth, a project manager who directed the job for contractor Tru-Built Construction. “I asked the clients what their plan was for the above floors [because] some of the tenants on the main floor were long-term leases. I knew they would be landlocked until those leases were up, so that’s how Post Lofts came to be.”

Post Lofts comprises six studio apartments on the second levels and one penthouse on the third floor of the building that contains Chase Bank, the first retail tenant. Tru-Built initially met Sup Family because of a joint use and easement agreement in an adjacent alleyway while renovating the property next door.

At one point, the two companies discussed whether demolishing the structures on N. 14th Street and constructing a new building would be a better approach. The expense, however, outweighed the cost to restructure the existing properties, so they opted to rehab them instead, which turned out to be a benefit for downtown Lincoln because the early-1900s structures had become iconic. 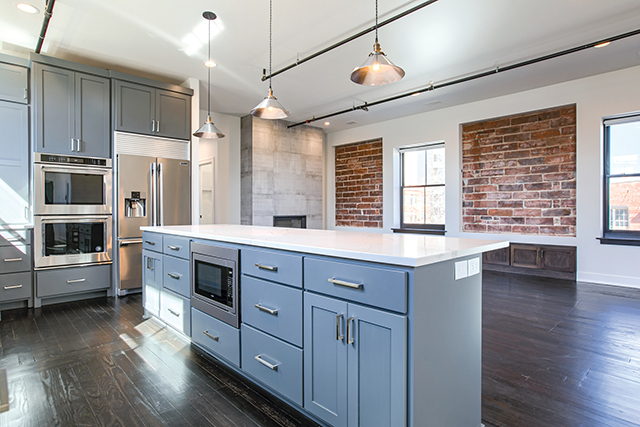 “Most of our other clients require that they have a pretty finite bid in front of them before they make the decision to move forward with a project. That was not the case with the Sup family,” says Bo Jones, president of Tru-Built. “They basically said, ‘We’re doing something with these buildings, and we know what we want to do with these buildings. Come in and make it happen.’”

Essentially the project came down to Muth fleshing out details and then giving the information to the architect to draw and show the inspector, Jones notes. “It had a lot to do with [Muth] pushing the project and dealing with the clients every day for hours walking through this project design.” 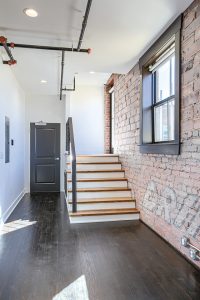 “Typically, we have the plans and everything before we even bid a project,” Muth adds. “They were dealing with a short window of opportunity with the leases that they had going on, so we had to push forward. We had to push forward quickly to maximize a return on their investment.”

Tru-Built spent the first few months just cleaning out the properties and getting them ready for construction. The company installed roughly 1,000 new structural joists plus 30 steel beams to shore up the building. In some areas, Tru-Built pulled out 6 to 7 inches of sag from the structure to aid the change in use from clothing store to apartments and account for new load calculations.

“The complexity of the structure was that those buildings were built at three different times as three different buildings, so none of the floor elevations lined up, [and] the sidewalk elevations didn’t line up,” Jones explains. “As we’re opening up hallways to connect all of the apartments upstairs, all of a sudden we blow through a brick wall and we’ve got a 3-inch difference in floors, so now we need ramps and shimming. [It’s] just the tremendous amount of logistics that go into making something that will pass code and tie everything in together and make it look seamless.”

“The hardest thing for us was getting materials in and out,” Muth adds. “Being downtown and trying to haul in 24-foot, 25-foot floor joists in a building that’s already standing becomes a very big chore. We had to do a bunch of footings. We poured 22 yards of concrete in the basement of an existing building, so it’s about taking advantage of opportunities to get materials in and out.”

While removing an interior wall, Muth pulled off a 2-foot by 3-foot chunk of plaster and noticed what looked to be a letter painted underneath. He called the clients to ask whether they wanted to uncover it, and they told him to go further but to use his judgment. Tru-Built ended up stripping the entire wall to discover an advertisement mural from the early 20th century in exceptional condition.

“Then we thought maybe we should test a couple of other areas in the building,” Muth explains. “So, we opened up some holes in other walls and just kept uncovering murals. At that point, it turned from something [that would’ve been] super easy to a month’s worth of stripping plaster.” Each mural they unearthed clearly had not been exposed to the outdoor elements for a long time. 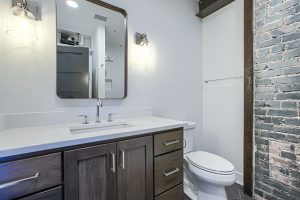 The orderly sequence of construction from south to north on the half-block had resulted in every building having an exposed north wall—in some instances for as little as a few months and, in others, a few years. Two of the current buildings, therefore, were once the last building on the block. When a new building was erected, some exterior walls became interior and were covered.

Sup Family decided to incorporate the advertisements into the floor plan for Post Lofts, and Tru-Built applied a clear-coat finish to the artwork for protection and longevity. “[Muth] assembled a team and spent the time to grind it, brush it, seal it and make it part of the decor of the building,” Jones notes. “The architect had originally designed the hallways and rooms, but the only place the artwork fit was in big spaces, so there had to be a quick redesign to incorporate all of them.” 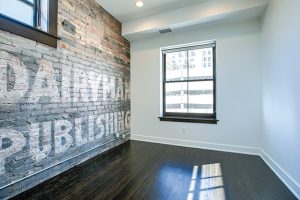 The company removed 11 sets of stairs from the building, closing them up and re-installing each one with its existing, original stair treads. “Those treads are reclaimed and repurposed from 1905 or 1907, so they’re actually the true dimensional lumber that still has the saw curves in it,” Muth says. Tru-Built reused other salvageable items for accent pieces and vaulted the ceilings as well.

“Over time, all the long windows on the second and third floor had been blocked over in brick,” Jones adds. “So, when you walked up the stairs, you had to have a flashlight because there were no windows, no skylights, nothing. [Muth] got the mason over there and opened all the windows again. They had custom windows made to fit the openings and transformed the daylight in that building back to what it was. There was a lot of tuckpointing and resetting brick involved in it.”

Muth proceeded with construction and knew what had to be done while the architect touched up details and determined plumbing and electrical locations, Jones says. “By time [Muth] was done with the structure, he had the information he needed to keep going. So, it was a very fast-paced project. Had [Muth] not been pushing as hard as he pushed, it would still be under construction.”

In the beginning, Tru-Built had only 200 amps of electricity available to work with for each of the three buildings. The company successfully undid that setup as a result of some neighboring properties, but the power ended up in a generalized pot. “We were able to get 1600 amps into one socket and re-disperse it from there to cover the load and draw—because the businesses draw at a different time than the residents draw—and worked the power out that way,” Muth explains.

At a certain point in the project, Lululemon wanted to lease one of the commercial retail spaces, and the company needed to move in within 60 days, he adds. Tru-Built hit that mark and prepped the commercial retail space of the third building for Madida Clothing, a women’s clothing store, in just 45 days. The retailers were all open while the company renovated the apartments upstairs. 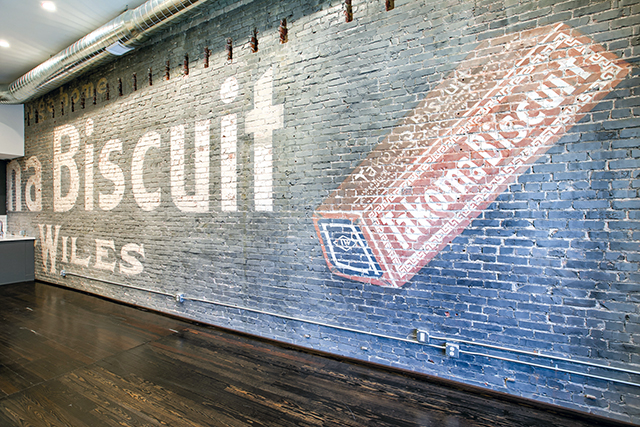 “We had a lot of 4:30 a.m. start times to be able to set up the crane, and it’s on the corner of two main arterial [roads],” Muth says. “We’d have to get there early in the morning to crane stuff up to the roof, crane stuff up and send it through a window because you couldn’t get it up the stairs.”

“Not to mention that you don’t have a whole lot of staging area outside,” Jones notes. “You’re working off the back of a truck a lot of times. The truck is parked, [so you’ve got to] hurry up, get the material off and then get it in the building. The logistics of working downtown anywhere for parking, staging, debris removal or getting a crane to set rooftop units, it’s just far more difficult.” 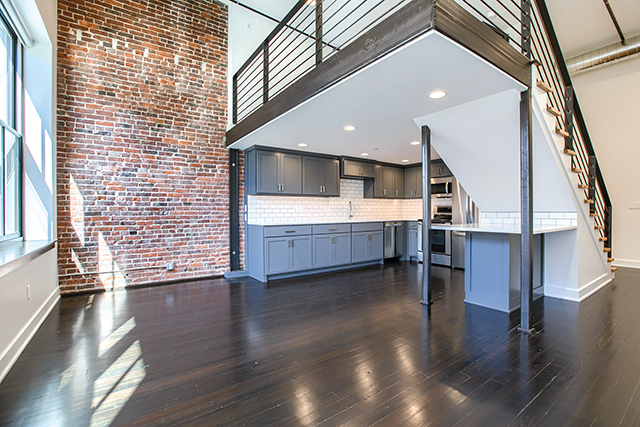 The apartments at Post Lofts, which includes roof decks featuring three natural gas fire pits and two patio grills, leased as Tru-Built completed its work. Tenants have been living in the units for about six months, and they appreciate the location, accessibility and perks of the building, Muth says.

“That was my life for two years. That was it. Walking through it now, it’s like, ‘I remember this, I remember that. I remember that was a pain in the ass.’ But that all made it come out the way it did. And we added probably another 100 years at least to the longevity of the building.” QR