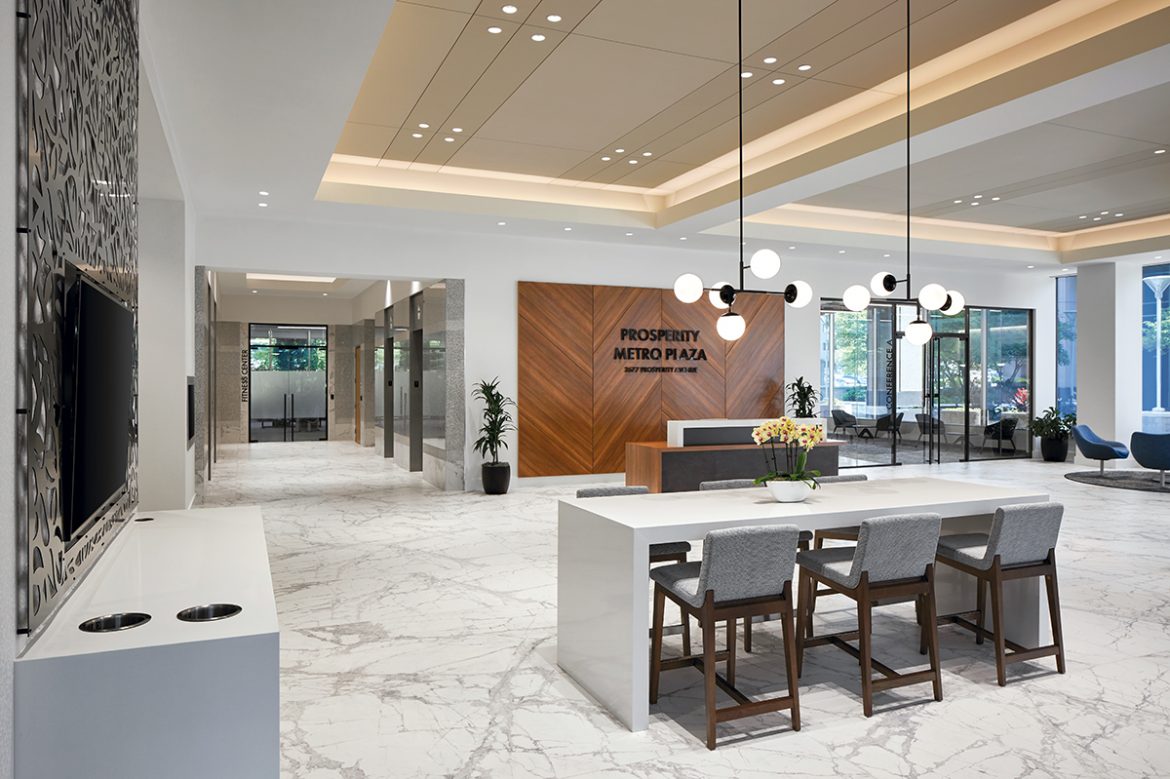 The owners of Prosperity Metro Plaza in Merrifield, Virginia, needed to attract new tenants to one of their seven-story office towers. They wanted to redesign and add to its amenity spaces while revitalizing underutilized areas and updating the overall aesthetics, so they brought in GTM Architects, a residential and commercial architecture firm serving clients in the Washington, D.C., area and nationwide.

“We had done some tenant work for the previous ownership of the building, so we were already familiar with the building and what the current configuration was, as well as the existing finishes and infrastructure,” says Robin Menge, a principal of the commercial interior studio at GTM. “It had a significant amount of vacancy,” adds Sarah Brooks, an associate with the architecture firm.

The original conference room in the building proved to be small and uninviting, and a basement fitness center lacked natural light and accessibility. Flexible spaces for multifunctional purposes also were absent. By expanding the existing lobby and taking additional space, GTM Architects created versatile areas for a range of functions and generated immediate interest upon entering the building.

“It felt dark, and it felt outdated even though it had a full wall of tall windows,” Menge says. “It shouldn’t have felt that way. The other thing that you saw when you walked into the lobby was that the flooring was an old, granite, patterned flooring. The materials were all very outdated.”

The existing conference room could seat only 16 to 18 people, and the owners desired a larger space that could hold bigger events. GTM Architects elected to build a new pre-function lounge and 40-person conference/training room on the opposite side of the building and enclosed it with full-height glass doors to afford visual accessibility and acoustical privacy for separate events.

This new conference center boasts a bright, modern area visible from the main entrance of the building. The training room can be divided into two 20-person rooms using a vertically folding, retractable partition by Skyfold. In addition, operable glass bi-fold windows give way to a new private outdoor terrace that the owners requested, which can be used as extended pre-function space.

“We had originally wanted it to be a broad feeling, almost like a glass wall that opens up, but we had some structural limitations when we dove into the design,” Brooks notes. “We decided to keep the sill intact and create a tall, operable window that opens up to give it that feel but saves cost.”

The neighboring building houses citizenship, immigration and customs offices and shares an adjacent courtyard, so GTM Architects had to be mindful of any disruption. By refocusing a portion of this exterior space toward the inset of the Metro Plaza IV building, the firm’s redesign enclosed the area and created a private terrace with built-in banquette seating and a decorative screen/gate that now provides additional privacy and prevents impeding on the shared courtyard.

Opening the existing lobby to a new gaming lounge with built-in seating and privacy rooms provides flexible space as well. GTM Architects added two privacy booths, a high-top table and chairs, a coffee station and a TV to make the large area more multifunctional. This activated the entire space by carving out several breakout areas for tenants and guests, and it also allowed the firm to enlarge and relocate the lobby’s security desk and directory to help people find their way.

“They did give us a lot of freedom, but we also had to be cognizant of how much [space that we were] taking away from their existing rentable square footage. They didn’t want to give up too much, but they also wanted it to function well,” Brooks says. “There had to be a balance there, and there was also discussion early on in what we could keep and where we could save costs. The big one was the existing ceiling and lighting in the building lobby—they were in good condition, so we were able to keep those [elements]—as well as the elevator lobby.”

Accessible off the main lobby, the new fitness center is centered on the elevator corridor through a set of full-height double glass doors. Natural lighting floods the space from expansive walls of windows just like the adjacent conference areas. The plumbing for the showers inside the locker room, however, had to wait because of a tenant below who could not accommodate the timeline.

“We weren’t able to install the plumbing the way it would normally be built out for a standard project,” Menge explains. “That did take a little bit of extra finesse and communication between the property manager and the tenant and our engineering team to make it work so everyone was comfortable. That didn’t come about until we were under construction.”

“When we ran into the plumbing issue, we temporarily removed that scope from the project, so that the rest of the project could be completed,” Brooks says. “We then submitted a separate permit for that plumbing work, and that work was done separately because the building [ownership] wanted to get the amenity spaces up and running for the tenants as soon as possible.

Although GTM Architects retained the ceiling and lighting in the lobby, the firm replaced the old granite flooring with a porcelain tile that looks like marble. The firm presented two options to the building owners, hoping they would choose to replace the flooring since it would help modernize the space. The cost ended up being within their budget, so they opted for the new porcelain floor.

“What we strive to do is to make the materials and the finishes somewhat timeless because we know they’re not going to tear this out in three years and redo it again,” Menge says. “It’s a major investment in the building. The flooring is a porcelain tile that looks like marble; it’s something that we believe spans multiple generations and a variety of tastes.

“We work closely with this client, and they’re very good at maintaining budget numbers for the projects as we’re moving through,” she adds. “So, if you start going into a direction that is going to be outside of their budget, they let us know; but as long as we’re in the budget, we keep going.

“For instance, the operable partition that separates the conference room into two separate spaces retracts up into the ceiling,” she explains. “That is not something we are able to use very often because we don’t typically have the height that’s required for it, and it’s an expensive piece. But it’s very effective and attractive. When they factored it in, they said, ‘Yes, we can keep it.’”

Overall, the firm redesigned approximately 3,850 square feet of existing rentable tenant space into new, modern amenities and added 550 square feet of new amenity space with the private outdoor terrace that can be included in the building’s BOMA calculations. Finishes throughout all the amenity spaces establish a casual, yet sophisticated environment that appeals to a broad range of tenants across any generation. In fact, the building is almost at full capacity, and GTM Architects is currently working on restoring suites on the second floor, Brooks notes.

“One of the best things that came from this project is the successful collaboration between the owner, the general contractor and the design team,” she says. “And I think everybody worked together with the sole purpose of creating a great project. I believe we all came away feeling very confident that it was a success, and everybody came away [feeling] happy with the [overall] experience.” QR