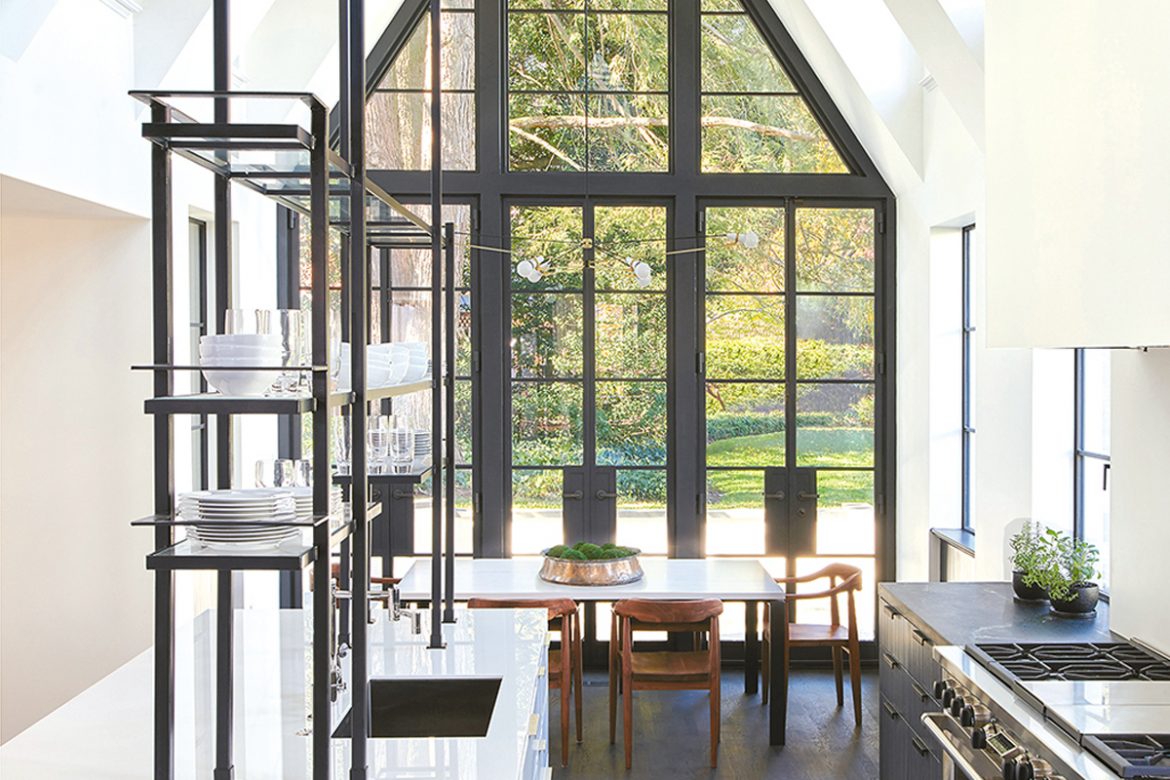 Almost 10 years after purchasing their home, the owners of a 1940s Tudor wanted to add a modern kitchen to the existing house. Many of their friends had purchased larger homes in the suburbs, where they benefited from bigger living spaces. The husband promised his wife they would be able to expand their Tudor, so he reached out to Donald Lococo Architects in Washington, D.C.

“They really trusted my vision,” says Donald Lococo, who founded his architecture firm more than 30 years ago. “They visited a lot of architects in town, and he kept saying that I had heart; my work had heart. And he wanted to make sure it was something that [showed] in the design.”

Lococo laid out an initial plan according to function and logistics, but the design gained momentum as he focused on the homeowners’ goals and dreams. Each of their aspirations, however, contained inherent contradictions. They desired a space that would respect the traditions of a 1940s Tudor yet also incorporate a modern, open kitchen with continuous sight lines. They wanted the new kitchen to operate as the center of the home, as well, despite having to be placed in its most remote corner.

“You take all those wants and parameters, and at the bottom of it is to distill it down into clarity. You can’t pick up the mic and drop it twice—you’ve got only one drop,” Lococo notes. “It’s one gravitational pull, and it’s got to be set in that moment. The idea is to distill, simplify, simplify.”

When he first walked in the door, Lococo immediately recognized many interpretations of Tudor style. People tend to group all Tudors into one category, he explains, although subtle differences have yielding varying levels of the style over time. Chicago Tudors, for example, incorporate more trim than other iterations. This home had sparse trim initially and worked primarily with plaster and metal.

A renovation in the late 1990s added wainscotting and trim to the point where the house looked more like a remodeled Colonial, Lococo says. The clients sought a unique, modern design in the kitchen addition, so he removed all the extraneous trim to reveal the simplicity of the home. The white plaster and black metal windows spoke to each other, creating a dialogue for the addition.

“What we pulled over was essentially the plaster material and the metal,” Lococo notes. “Those two sparred as opposites against each other. With any great opposites, you get this idea that one just informs and makes the other that much stronger. The metal shimmer and the sharpness and thinness of that black metal sparring against the amorphic, white plaster just creates that duality.”

The white, simple walls serve as an ideal backdrop for black metal architectural elements, which include island shelving and steel I-beams with exposed bolting. In fact, the original machine-age steel windows inspired the 13-foot-tall steel tower that has metal elements like the existing steel doors as well as the window members. Glass shelving furthers the machine-age window parallel.

“The biggest project challenge just from a tangible point of view was the way logistics worked with that island,” says Lococo, who estimates it weighed about 800 pounds. “All that weight is coming down on a piece of glass-like countertop. [The steel beams] sit there as if they can land wherever they want, [but] right underneath the layer of thin countertop is a network of steel that runs in different directions to get down to steel beams in the basement traveling across the floor.”

A custom transparent tower solved the question of how to design a neat and uncluttered kitchen while keeping all needs at arm’s length. Even though it holds enough dishware for eight people, the thin members with transparent shelves allows light through and embraces unobstructed, open space. The sculptural element also provides ample room below in extra cabinetry for necessities.

The steel tower as well as the addition itself successfully use elongation to produce an airiness within the new space, Lococo notes. “All the sudden the ceilings become taller, and a chiseled, origami-like roofline plays against the simple plaster of the existing house” and its dark, metal windows, he explains. “You get an entire end of the house that’s blown off, with all the metal work in there. And then the extremely exaggerated tower of the island just shoots off the island.

“[The client]’s promised a great kitchen to his wife,” Lococo adds. “We’ve taken every kitchen cabinet out from where she would want it at arm’s length, and we put in this thing that gives it a certain amount of use, but now if she wants something that’s not right in front of her, it’s pushed to the island—an island that we’re now putting steel into and taking space away from the base.”

Negotiating the steel around drawers and spaces carved out for appliances such as a microwave increased the utility of the island. Sometimes a focal point can be installed at the beginning of a project, Lococo says, but in this case the steel tower could not be placed until the very end. “It’s almost like you have a bridal party, and you’re taking pictures, [but] the bride is not even there.

“You’re getting everything set up, and you almost have to anticipate it and paint brush with the focus not there,” he notes. “Because it was only when everything else was entirely done that the steel arrived, and it was assembled and welded in place. And that’s when everyone went, Oh, now I understand. Understanding the light and the density and all the pieces, the way it worked with the light. It was something that you had to not only anticipate yourself, but everybody else had to trust you. It was like the punch line of a joke finally hit; it was an aha moment for people.

“The thing that’s different about referencing traditional [architecture] is that you’re referencing something that people see. You can say, ‘OK, there’s a gable, there’s a trim, and you can show them those things,” Lococo explains. “But with modern, you’re sort of inventing a language—you’re not able to reference something that’s there already. There’s nothing you can point to.”

A priority of the design for the kitchen addition concentrated on the environmental impact of the project. The full glass wall at the end of the kitchen reveres a grouping of 50-year-old Hemlocks while at the opposite end of the kitchen, a window close to the peak of the structure looks up to a green roof. In fact, green walls of ivy were integrated into several exterior faces of the residence.

Lococo successfully centralized the new kitchen through two strategies despite the addition being placed in a corner of the home. First, he positioned the kitchen area, cabinetry and appliances on both the axis and cross-axis with major hallways and living spaces. As a result, the kitchen is continually in view through the house not only from the front to back, but also from side to side.

Second, he generated a connection between floors with paired dormers in the two-story kitchen and breakfast area, which provides overhead views of that space from the master bedroom. “The most exciting thing really was watching [the homeowners] learn and understand how it worked, and like most modernism was based on principles of shadow, shade, light, breeze, airy and open.

“Some of these [projects] are like the client opening a year-and-a-half-old Christmas present and, especially on this one, coming down to an immense amount of excitement and reward,” Lococo adds. “Because there’s a lot of promise, and there’s a lot of nervousness. And it’s not entirely a trust issue. There are a lot of pressure points all the way through [a job], and this one had them.” QR