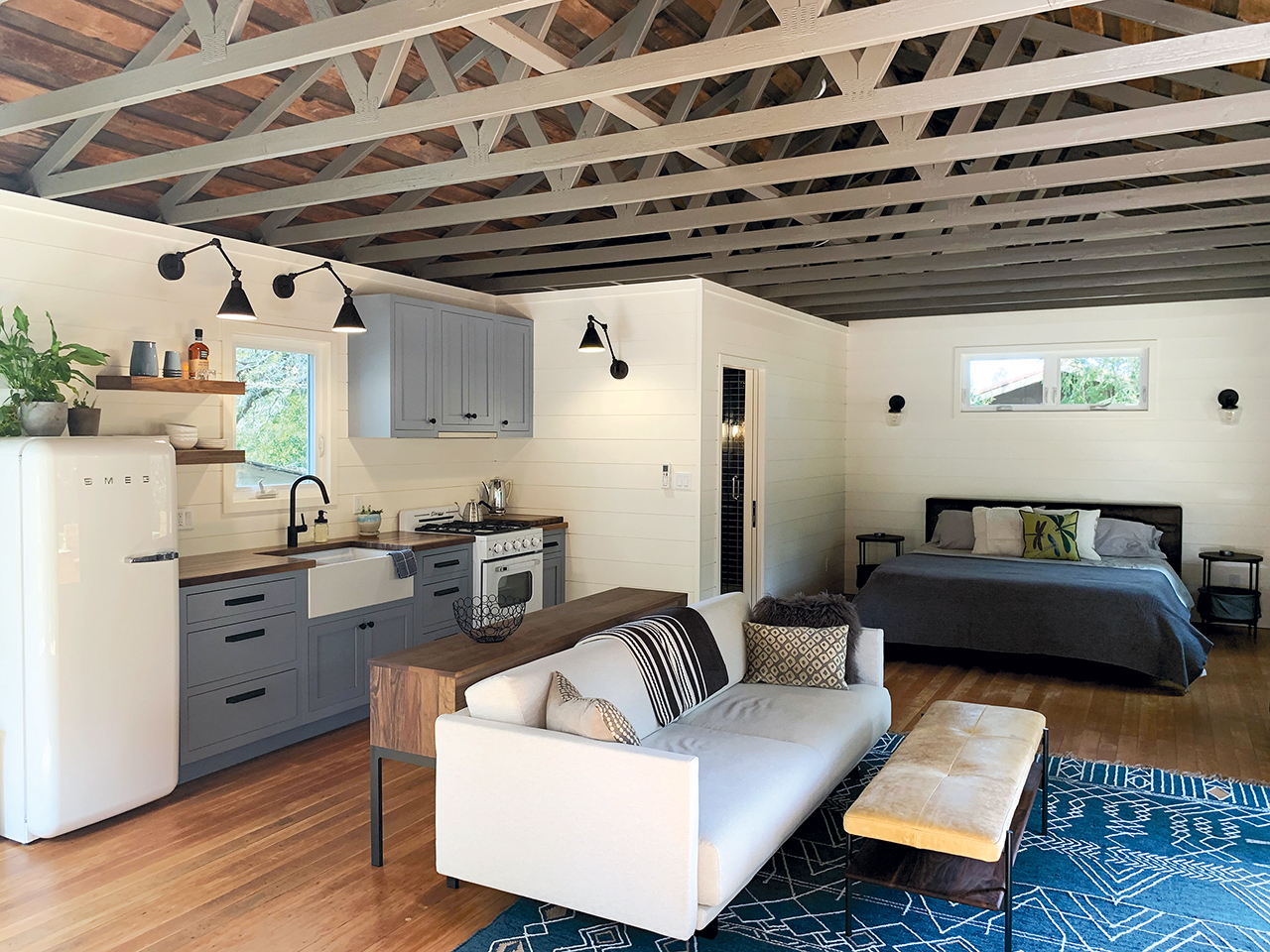 The original structure was built in the early 1930s for use as a workshop and, more recently, as a potter’s shed and storage for garden tools and equipment. Set deep in the backyard of the main house, it had old-growth redwoods and pine trees shading it, but no other formal landscaping. 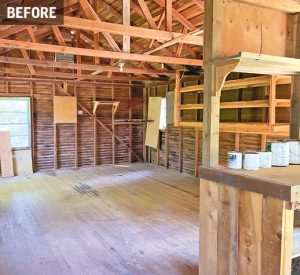 After years of deferred maintenance, the owner considered “the barn” a wasted space—but one that had lots of potential. Because she often has overnight visitors and the main house is small, her goal was to add to the livable space of the house to comfortably accommodate family and friends by converting this old and dilapidated shed to an accessory dwelling unit (ADU) cottage.

The cottage was to be designed to include a large open room with a sleeping area, kitchen and a full bathroom. Not only would this cottage provide the additional guest space she needed, but it would also add to the resale value of the property and could house a future caretaker or tenant (another important goal). 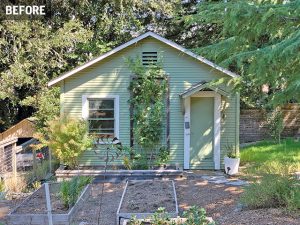 She imagined a secluded guest cottage with lots of light and views to the outside, which was also undergoing a complete landscape redesign during the cottage remodel. The design process required careful coordination between the building and the landscape designs in order to achieve a strong connection between the interior of the remodeled cottage and the exterior—and for an attractive passage through the new landscape to the new guest house.

The original building, as an unconditioned structure, did not meet the property line setbacks required for a conditioned living space. In order to obtain approval from the local planning department, the neighbors had to agree to a waiver of the setback requirements and any windows on the two encroaching sides of the building had to be carefully located so as to maintain privacy to and for the neighboring houses. Another requirement for approval was that the new design stay within the original footprint. 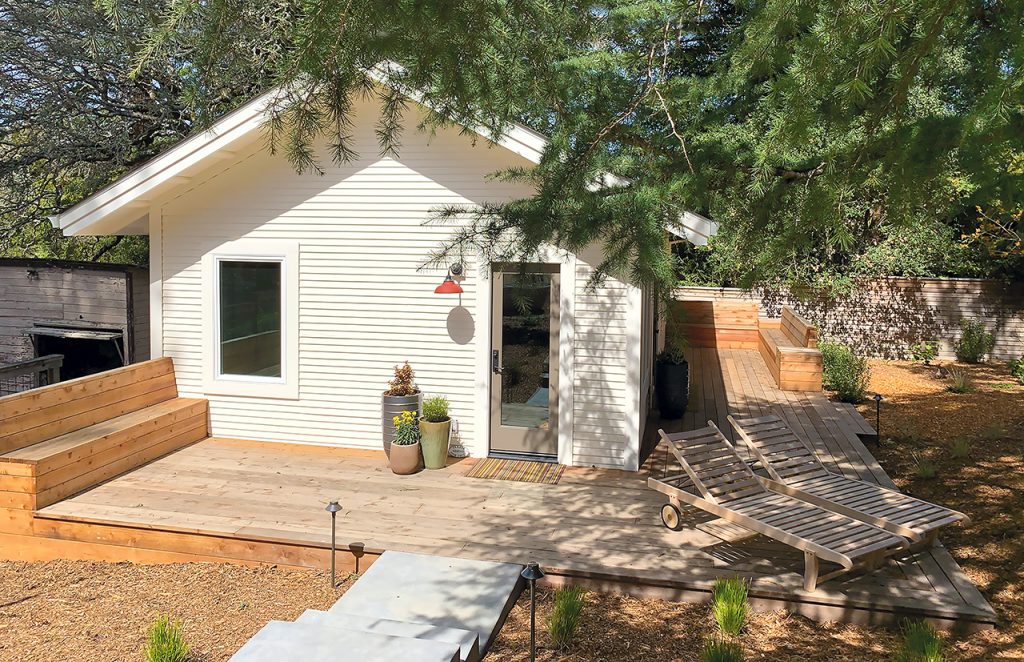 A top priority for the owner was to preserve as much of the materials and character of the original structure as possible while adapting the interior for a more modern, casually luxurious guest accommodation. The building was supported by a series of concrete piers set directly on the dirt with no footings and, as a result, the building had settled on one end. The structure was raised, leveled and a new concrete perimeter foundation was constructed, and all the underfloor framing below the floor joists were replaced.

The old carpenter trusses did not meet current structural code, but their rustic appearance was especially important to the client, as was the old water-stained roof sheeting visible from inside the building. Since this all needed to be replaced, the solution was to carefully remove and set aside the roof sheeting and the old carpenter trusses were removed and disposed of. 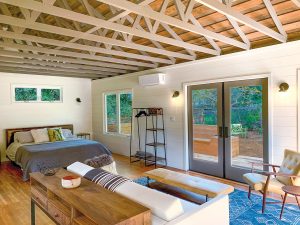 New, engineered trusses were installed, distressed and painted a dark color, and the old sheeting was re-installed with a new structural plywood membrane and rigid insulation installed over the old sheeting. This resulted in a structurally sound roof structure, which looked as if it was as old as the rest of the building. 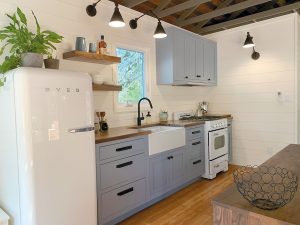 The flooring of the old building was the original Douglas fir plank subfloor. To retain the rustic character of this original floor, it was sanded, sealed, stained and refinished rather than replaced. The siding was an old triple drop profile that fortunately could be sourced because some of the existing siding was damaged, and the relocation of the windows and doors as well as the new cripple wall around the crawl space required the installation of new siding.

Since the existing building had no insulation and the old siding had been installed directly over the wall framing without any building wrap, closed cell foam insulation was sprayed into the walls both to insulate and to air-seal the structure. And, since current structural code required plywood sheeting on the walls, plywood was installed on the interior of the walls over the foam insulation with wood nickel gap paneling installed over the plywood. 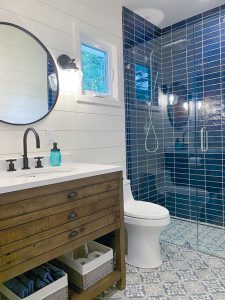 The net result was a structure that preserved its old, rustic appearance on the exterior and, on the interior, a careful blend of the old rustic with contemporary finishes was achieved. The new landscape design included an outdoor dining and lounge area, a hot tub and a large fountain, so easy access from the interior to the new outdoor entertainment area was an important consideration for the client.

To create a strong connection between the inside of the cottage and the exterior, a pair of glass doors was installed that open to a large side deck with built-in storage benches. A small deck to the main entry door created an easy transition from the sidewalk path through the yard to the interior of the cottage. QR 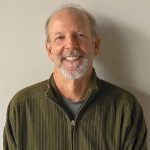 Dave Leff is the founder, president and CEO of LEFF Construction Design Build. He formed LEFF Construction in 1978 as a sole proprietor and was joined by his father in 1987 when they incorporated the company. Leff is a certified green builder and over the decades has become an expert in solar and sustainable building, historical renovation and infill real estate development.