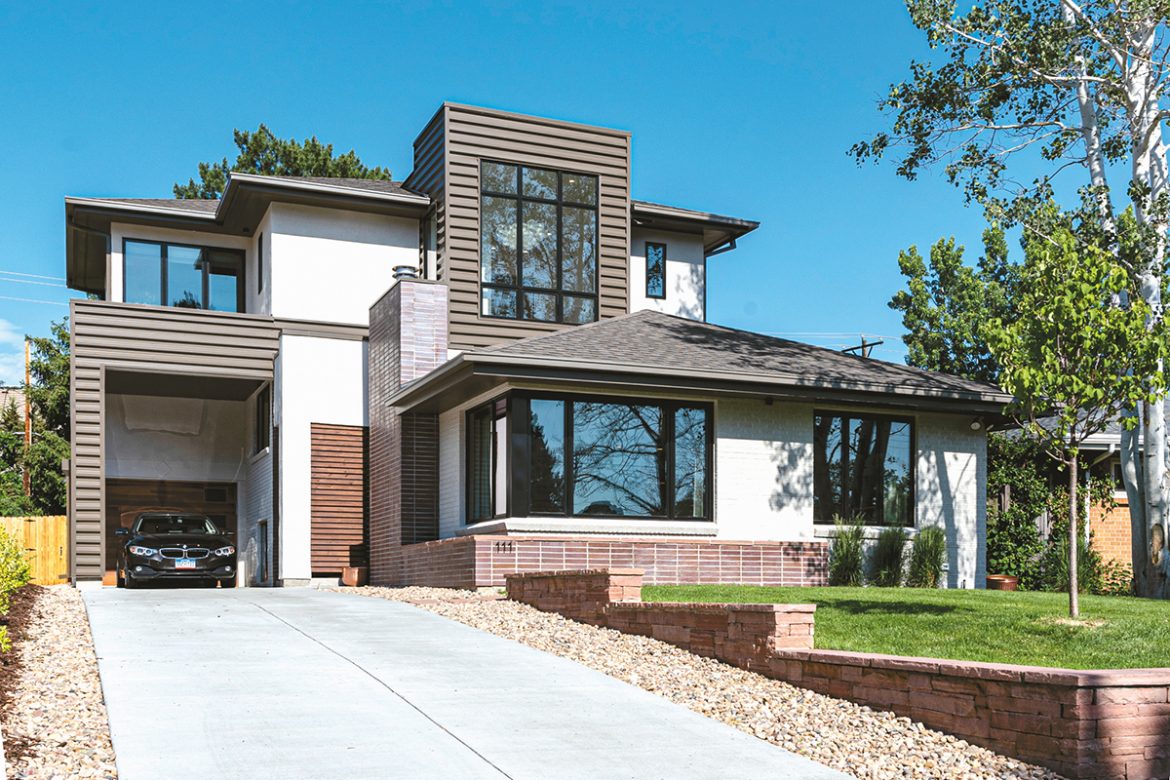 The saying, “It takes a village,” was never so true as in reimagining this 1956 split level into something very much 2022. Chris Viney, a Welsh-born contractor, and Katy Skye Booream, the interior designer, were the other critical team members.

“I think Chris, Doug and I made a great team,” Skye Booream says. “There wasn’t anything that stumped us. I’ve worked with plenty of builders and architects who want to take over the lead, but between the three of us, it was a real collaborative effort—egos checked at the door.”

I trained as a preservation architect and have spent over 40 years designing sensitive additions to mostly historic houses. That’s why I was particularly thrilled to be chosen to help bring Skye Booream’s contemporary “industrial modern” vision to life. She is a very talented New York-trained interior designer making a name for herself in Denver.

Contemporary is, after all, a design idiom just as is Colonial and Tudor, with its own rules and precedents. With a few pictures of modern homes for inspiration supplied by the client, I was off and running. What makes contemporary easier is its dependence on flat roofs, which were used sparingly here but are important to the composition, which has a hipped roof as its primary cover.

From an exterior material standpoint, the hardest part of merging the new and old was finding brick. The original structure was built using long bricks, popular in the 1960s and back in style again. Viney found a source of both full and thin long brick that matched.

The split-level 1950s house was pushed almost to the north property line, where another home built at the same time sat just 10 feet away. Windows on that side of the home were usually draped shut for privacy, so we eliminated three north-facing windows and a fairly useless door to give maximum privacy while turning our view to the sunny east and south. The not-insignificant side benefit was gaining wall space for more cabinetry. Two new skylights more than make up for lost daylight from the old north windows.

One of the biggest challenges here was that access was only from the front, and much of the work was on the back. There was also a large amount of steel structure to be craned into place, and we had to correct some shaky floor framing for the main bedroom level before we could build up. The masonry walls were strong, but they offer almost no thermal resistance, so we furred all of them with 2 by 2’s and 1.5 inches of closed cell foam for a thermal break.

“Because of all the steel beams, routing plumbing and heating was a trick, but my subs got it done,” Viney says. “The dividing wall between levels front to back is 2 by 6 and is packed with heating, plumbing and electrical risers to make it all work.

“The weekly site meetings we had with architect and owners were invaluable to keep track of all the moving parts,” he adds. “Katy ordered all the decorative lighting, tile, appliances and many other things, and she was terrific at documenting it and tracking delivery to keep the job going.”

The owners liked the mid-century modern vibe, the split levels and the morning light. They were frustrated by the small master suite, lack of connection to backyard, the kitchen and bathrooms, and the poor lighting. According to our initial questionnaire, they wanted “a perfect master suite, light and airy, with a fireplace and seating.” They also wanted “all rooms to be warm, inviting, relaxing and functional.”

“We disliked everything about the current kitchen, especially that you were isolated from the rest of the house,” Skye Booream says. “We wanted an island that can seat at least four [people], all the appliances to blend seamlessly and clean, empty countertops.”

Mission accomplished! The finished project garnered three local awards as well as a silver award in the QR Master Design Awards and an NKBA Kitchen and Bath Design Industry Award for the kitchen at KBIS/IBS in February.

“This project, although challenging, was fun for me,” Viney says. “I get weary of cookie-cutter pop-top additions; this was unlike anything I’ve ever built, and I have photos of it up on my website, along with a Tudor pop-top that Doug designed a couple years ago, [which is] also spectacular in its own way.”

Viney, whose company is called Britman Construction, is from Wales and ended up in Denver at the end of a five-year walkabout after graduating university with a degree in economics. It was in Denver that he ran out of money and hooked up with new friends through a rugby club, and they offered him a framing job.

He had never worked as a carpenter, but his dad was a blacksmith, so he was no stranger to tools and manual labor. He quickly became a foreman then started running his own framing crews and, ultimately, hung out his shingle as a general contractor. QR

Since 1979, Doug Walter Architects has been locally and nationally recognized with more than 140 awards for its work on older homes, designing additions that fit a home’s unique style, singular custom homes, and for enthusiastic participation in trade and professional organizations and a large body of pro bono work for charitable organizations.