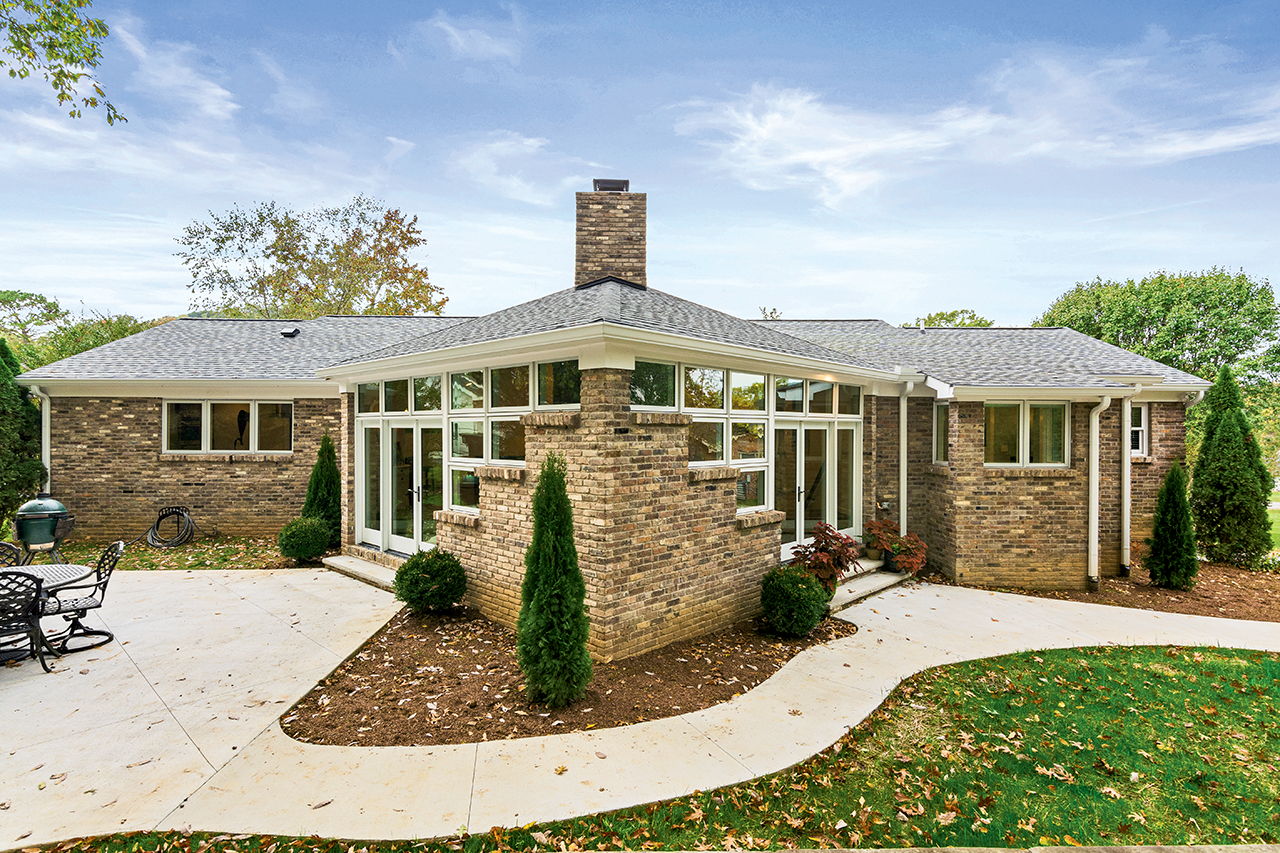 Years of dreaming led to a new, joyful space for these homeowners. As with most clients, they imagined for years the ways they could update and improve their home for a better quality of life. 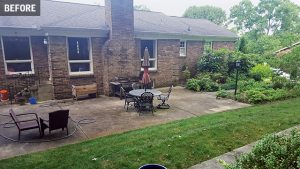 When the clients met with the architect, David Kidd, to plan their remodel and addition, they were not exactly sure what they wanted. In addition to updating their home, they knew they wanted to add light to the living area, open up the floorplan and the back of the home to the lush landscaping in the rear yard (that they previously had no direct access to), and to somehow raise the ceiling heights of the family room.

During that initial meeting, Kidd took note of how many books the homeowners owned and discussed how much they enjoyed reading and even writing. Kidd came back with plans for this beautiful library and remodeling of the existing house that accomplished exactly what they were looking for. 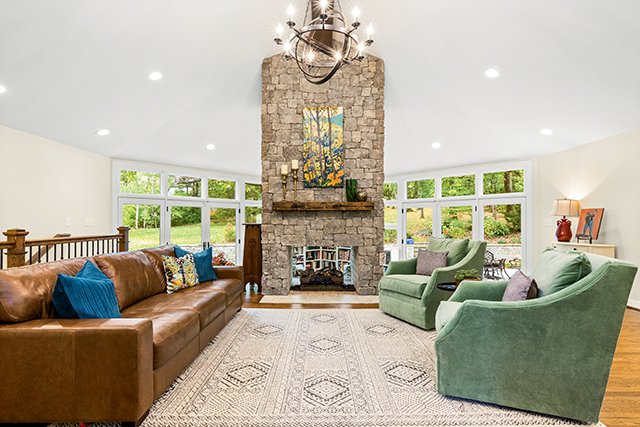 It was open, let an abundance of light in, had multiple bookcases and provided an intimate setting for reading and visiting. It also included a two-sided fireplace and vaulted ceilings in the family room and library, and it provided easy access to their beautifully landscaped backyard with new terraces and walks. 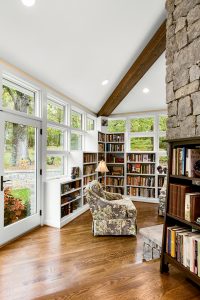 To open up the floorplan, several interior walls were removed. The owners also wanted to eliminate the wobbly steps to their lower level, which were in a closet in the family room.

As construction commenced, Crane Builders quickly realized that the key to all these great plans working was the two-sided fireplace—for a number of reasons. The existing family room fireplace had a hearth that was raised about 18 inches, which would have made the hearth in the library too high and very awkward.

Crane also realized that with the ceilings of the family room and library being vaulted, the fireplace would have to be able to support multiple ridge beams and roof loads. After consulting with Kidd and a structural engineer, a plan was formulated.

The fireplace was demolished to below floor level and rebuilt with a flush hearth in the family room and a raised hearth in the library, as well as adding structural masonry columns within the chimney to carry all the roof loads. This created a beautiful limestone (natural to Tennessee) chimney, with a see-through fireplace that looks like it has been there forever. 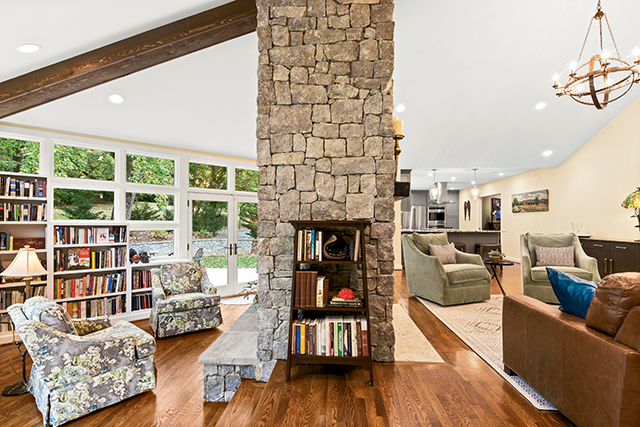 Kidd’s design also stepped the library down two steps from the main floor level, which set the new space apart and gave it a warm and inviting feel, as well as allowing for taller doors and windows and a plethora of bookcases for the homeowner’s collection. If the library had not been stepped down the two steps, the entire top row of windows would not have fit. 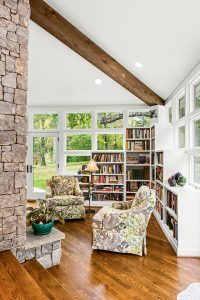 Being two steps down also provides for easy access to their new terrace and walks. Another consequence of projecting the library addition into the landscaping was the creation of a better-defined exterior space that is visually connected and directly accessible from the house.

To solve the problem of the rickety steps to the much-used lower level, the architect and builder devised a plan to take the stair entry out of the closet, reverse the direction of the steps and install a sturdy set of oak steps and handrails that are now a key design element of the family room.

As a result of the collaboration of the homeowner, architect, structural engineer and Crane Builders, all of the clients’ goals for their home were met, and it turned out to be so much more than they could have ever imagined. The floorplan and the ceilings have opened up, allowing light to flood deeper into the living areas of the home, which had previously been so dark. 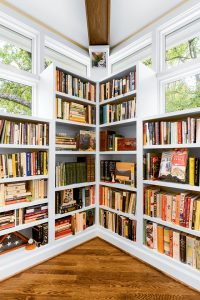 When friends walk into the house, their eyes are immediately drawn to the tall, open fireplace and library. The owners start every day with a cup of coffee in the library looking out at their beautiful gardens and often witness wildlife pass through their backyard.

The new steps to the lower level are very inviting and makes the lower level a true part of the house, allowing for easy access to the playroom, new workout room and the laundry room. The remodeling project has made the clients’ home the place of solace and joy that they always knew it could be.

Their only regret is that, because of COVID-19, they have not been able to have a big party, and they always wanted a space that would lend itself to parties and dinners. Their friends and family have enjoyed their new space immensely in smaller groups, and they are looking forward to hosting parties for larger groups when healthier days return. QR 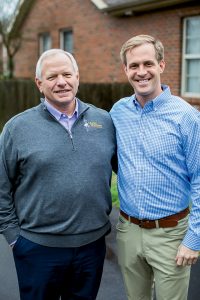 Crane Builders has been serving families in Middle Tennessee since 1987. The company was founded by David and Cilla Crane. Today, David and his business partner and son-in-law, Tyler Leuck (right), run a family business that will continue to serve Crane Builders’ clients with excellence for many years to come.