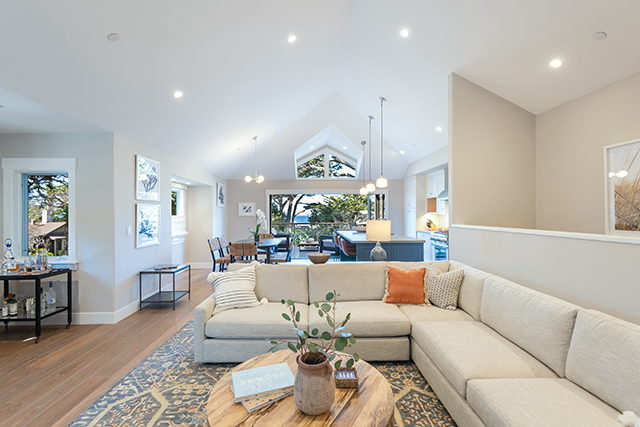 Tim Ramos and his wife Catherine had hoped for a beautiful beach bungalow. Although the San Francisco Bay Area couple wasn’t entirely sure what they wanted in a vacation home in the legendary community of Carmel-by-the-Sea, they did know how they wanted to live in it. 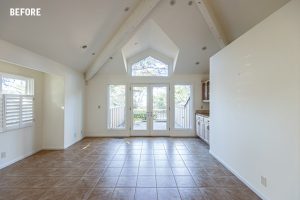 They imagined a cozy-but-not-quaint, an open-and-airy-but-not-big space that would welcome them home and accommodate their children and grandchildren for the weekend. They envisioned waking up to the coastal clear light and wandering out to the deck to watch the surf seeping into the sand. Later, they would linger long enough to witness the green flash as the sun slipped into the sea.

When their realtor introduced the couple to the cottage identified as “Pico” on the garden gate, they imagined it was too small to suit their needs. Yet they were instantly enamored with the verdant setting and seascape views accessible from every part of the property—except the house.

John Lewis of design-build firm Lewis Builders sensed something more. When he looked at the property, Lewis envisioned its potential. As he listened to his clients voice their interests and objections, he turned over the real estate flyer and began sketching the contemporary floor plan of a beach bungalow, without sacrificing the aesthetic of the 1960s cottage.

“Once our clients made us part of their process, we sought to correct the defects that surface in an older house and to create a conceptual design that would reconfigure the cottage, opening the space to suit the family while changing a ‘peak of the ocean’ to an expansive view,” Lewis says.

It’s one thing to envision a remodel and quite another to execute it. Particularly in a place whose preservation society, coastal commission and neighbors keep a watchful eye on their city by the sea. 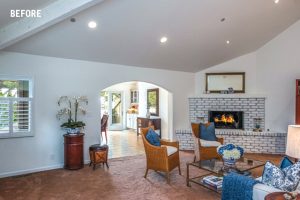 Thus, the redesign of a classic Carmel cottage into a dwelling that works well with the landscape and provides visual access to the dynamic coastline, while also complementing a contemporary lifestyle without sacrificing the character of the architecture, can be a conundrum. But the Lewis Builders team considered it an opportunity.

Nevertheless, the challenges were significant. The front of the house looked more like the back. A pair of patio doors, opening directly into one of two bedrooms, were featured more prominently than the front door. Despite the benefit of an early 2000s remodel, the floor plan suffered from an awkward conformation for contemporary living. The ceilings and beamwork were a kaleidoscope of angles, creating an imbalance of sightlines and room configurations.

Typically the heart of the house, the kitchen was tucked at the end of a hallway, a design relic from the days when the kitchen and the cook were detached from the dining experience. Apart from a low-arched opening, the living room was sequestered from the seascape by a solid wall, and the fireplace was an unsightly intrusion. The patio deck was too small for gathering, its view of the Carmel Bay blocked by a tangle of trees.

“We actually saw the house as quite Tuscan in its design and finishes,” Catherine Ramos says. “I’m very much about the authenticity of architecture, and this didn’t seem to be the beach bungalow it was meant to be when it was built. It didn’t fit the neighborhood or our vision, but we loved the property and sensed it had potential. Lewis Builders proved it.” 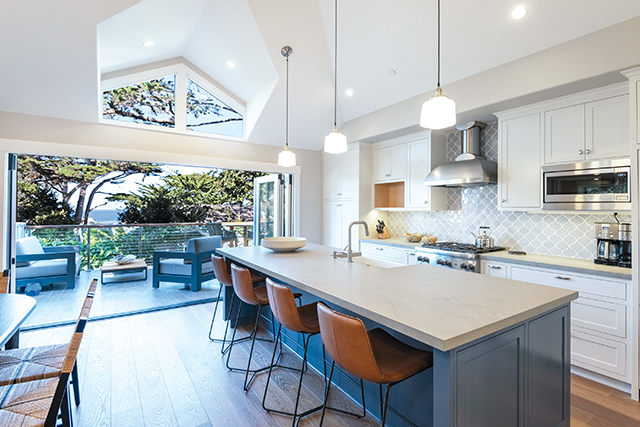 Lewis said he could open the interior and create the setting for an indoor-outdoor lifestyle. His design team revised the floor plan to add another bedroom, shifted the kitchen and great room to the center of the space, balanced the ceiling framework and expanded the deck.

“Undergirding this remodel was the extensive process that remains unseen yet became the foundation of the project,” says Scott Julian, president of Lewis Builders. “The planning and permitting processes particular to building or remodeling a property on the California coastline are extensive. Yet the ability to navigate the complexities of each step enabled us to help the Ramoses realize their dream for a forever home by the sea.”

A primary focus of the redesign and reconstruction of this property was the entrance and front façade of the house. The stone entry path, running from the garden gate past a pair of patio doors, indicated this was the entrance while the solid wood front door, with its metal speakeasy, was recessed by the architectural lines of the house, suggesting a possible door to a duplex.

“The entrance to the home is one of its most important visual and structural elements,” says Cari Hill, director of interior design. “We replaced the patio doors with a double window in complement to another pair of windows across the front. We installed a Dutch door at the entrance with a windowpane grid to let in light, preserving a key architectural element appearing throughout the neighborhood while maintaining the character of this house.”

Inside, the Lewis Builders team made a 1,600-square-foot house feel more like 2,200 square feet of usable space without increasing the square footage. They could have updated the kitchen where it was; yet, to open the space and suit the family friendly lifestyle of the owners, they created a contemporary open-concept kitchen in the main living area. 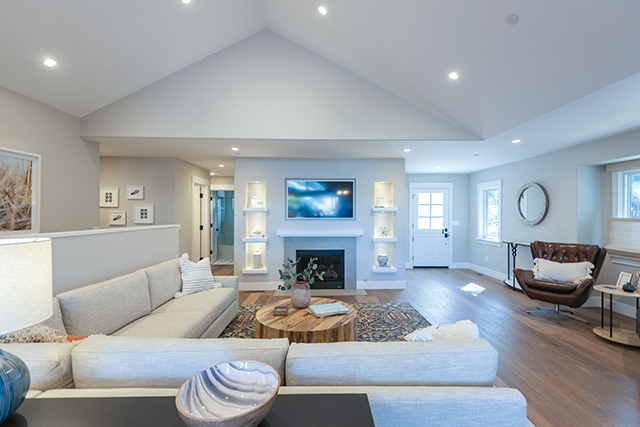 They also replaced French doors with a retractable glass wall, extending the living space of the home out onto the deck, which they expanded by 4.5 feet to increase the vantage on the seascape framed by trimmed trees.

Although it was reflective of the home’s early architectural design, the fireplace—which protruded into the middle of the living room—compromised contemporary living and blocked significant views of the sea. In moving and updating the fireplace, Lewis Builders preserved it as a functional focal point without being intrusive.

Part of the process to accommodate contemporary living in a classic Carmel cottage included integrating smart home technology. Because the homeowners are Silicon Valley professionals, a collaboration of expertise resulted in cutting-edge features. A prime example is the television, which hangs above the fireplace with all the subtlety and significance of fine art.

“When guests first see the TV, they assume it is a piece of art on the wall. Thanks to a cable we ran through the wall and a special TV format, it is,” Hill says. “There’s nothing inviting in the black hole of a television when it’s not on. The ability to present and change art through an extensive library of options really enhances the art of living.”

Renovating this Carmel cottage was a classic case of ascribing value to a 1,600-square-foot house by looking at it through the lens of what’s possible, paired with smart design and value-engineered decisions in keeping with a realistic budget. It also meant working closely with the clients and staying open to ideas so that, ultimately, they feel at home. 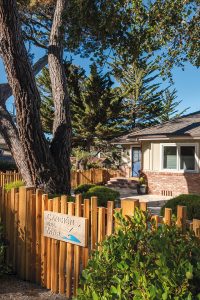 “Understanding that construction isn’t the place for this because things can’t always go according to plan, Catherine and I typically have high expectations,” Tim Ramos says. “But we found, in meeting John Lewis and his team, their expectations were even higher than ours. And ultimately, the remodel exceeded all expectations. Had we bought a vacant lot, I’m not sure we would have built something as great as what we remodeled.”

Because they can hear the song of the sea from their home, the Ramoses named their Carmel cottage “Cancion del Mar.” It turns out they got exactly what they wanted and see it as a forever home for family to enjoy for many generations to come.

“When a residential construction project goes poorly, you live with it every day, as the defects keep the memory ever-present,” Tim Ramos says. “We have just the opposite, as we enjoy every feature of our home.” QR