Jackson Design and Remodeling creates a bathroom with custom details inspired by a luxurious hotel spa to make the serene space look and feel like home. 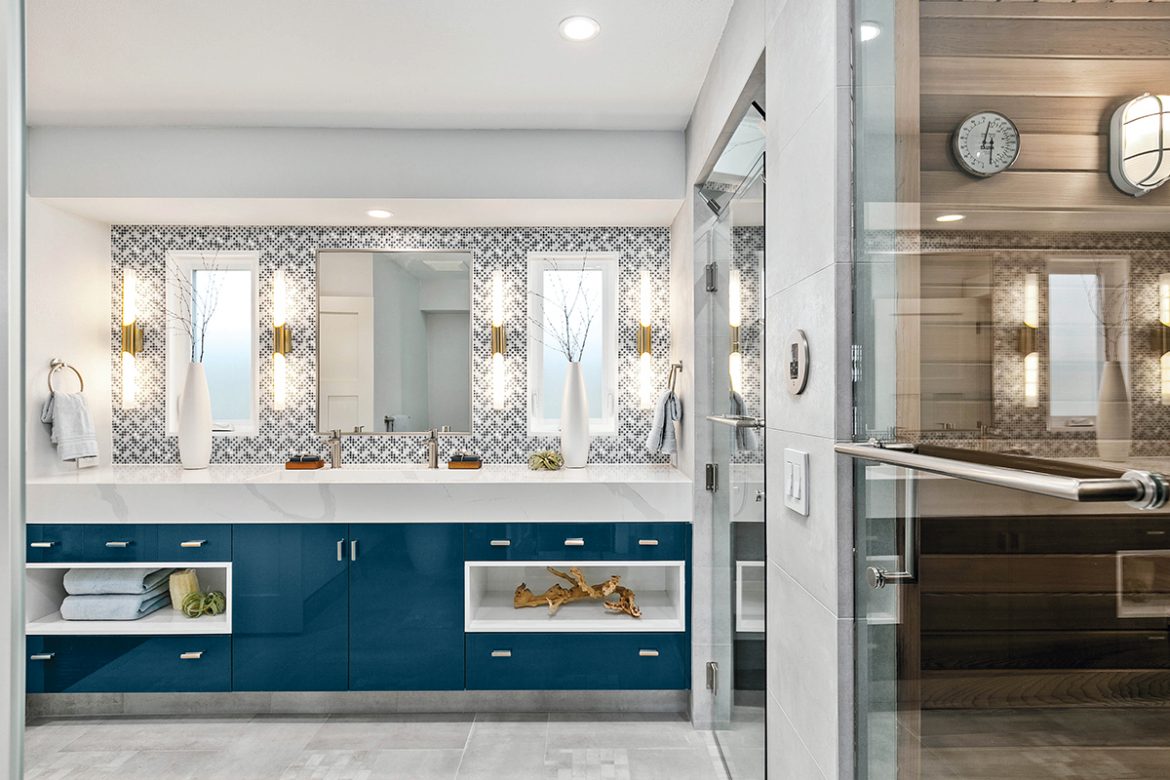 A couple came to Jackson Design and Remodeling with a vision for a space devoted exclusively to self-care and wellness in their beautiful home on the San Diego coast. They were originally inspired to work with us when they walked into the newly remodeled design center and showroom on our design campus.

Potential clients often walk into our design center, where they can explore multiple kitchen and bathroom vignettes that capture elements they can see and touch. After looking through the hundreds of materials and ideas on display and discovering what resonated with their styles, the couple had a better understanding of the possibilities for their home.

The husband is a doctor, and they both have busy professional and social schedules and emphasize the importance of physical fitness in their lives. They asked us to design a luxurious spa—comfortable for two people to share—where they could escape and decompress.

The clients had recently purchased their home, and although the overall design of the home was more traditional, they were attracted to the idea of a very modern aesthetic for their tranquil spa. But they also wanted the spa to feel as if it belonged in their home and was not jarringly different from its surroundings.

The original area was dark, dated and last remodeled in the 1980s, and it included two bathrooms. The clients decided they would prefer one generously sized bathroom with all the amenities they desired. Borrowing from an existing guest bathroom, a small powder room and a laundry room gave us enough space to reconfigure an expansive new bathroom. Two entrances into the bathroom in the new configuration had to be moved to accommodate the design.

One of the first challenges we faced was creating a clean look and feel with the sensibility of a resort-level spa that would seem like “home” and not commercial. The custom details we integrated make the spa communicate a one-of-a-kind impression reflective of the clients’ personalities. At the same time, every aspect of the “Sparkling Spa” was planned to evoke the quality level of a luxury hotel.

The clients were definitive about including both a steam shower and a sauna in the bathroom, and there were initially some significant challenges to integrating these major essentials. Technical challenges included where to place control units and access panels while maintaining the integrity of the design. Adding a pantry cabinet in the adjacent laundry room provided space to conceal the steam shower control unit and keep the design uncluttered and appealing.

The steam shower and sauna needed to be visually unified with a luxury look and feel. Tile starting on one side of the steam shower was continued on the walls and floor, carefully designed to integrate the elements. The sauna would typically have a wood door; we ordered a custom glass door to underscore the unity of the design.

A dramatic wall of mosaic tile sets the stage for the customized decor. It was meticulously created in a pattern encompassing several hues and textures, with blue and gray shades echoing the nearby ocean. We had to order the tile from Italy because it was not available in the U.S. at the time that we were developing the design.

A custom sink assembled in and imported from Spain is an innovative alternative to the typical “two people, two sinks” design of today’s modern bathrooms, so that also presented a challenge. We anticipated lengthy lead times while designing this bathroom because of industrywide conditions at the time, and we planned accordingly. After a 12-week lead time, the custom countertop arrived from Spain, but it spent six weeks at the port in Long Beach.

A pair of frosted windows above the sink brings light in and provides privacy from neighbors. We selected sconces in frosted glass and aged brass to add a flattering glow next to the vanity mirrors and amplify the shine of the backsplash. Vibrant blue laminate cabinetry with a metallic finish is a creative element with artistic niches that make a stylish display for towels and accessories.

Generous storage is contained within the cabinetry. Instead of designing the custom cabinetry with the look of large drawers that could add a sense of heaviness, the vanity gives the appearance of several smaller drawers with the imaginative placement of doors and handles. This adds visual interest to the composition while still offering the clients all the storage they need.

On the tile floor, 12- by 12-inch mosaics were meticulously placed to draw the eye throughout the room and create a sense of harmony. The flooring continues into the shower and sauna, unifying the overall effect. Inside the steam shower, a bench, extra-large niche, layers of tile, and aromatherapy contribute to the overall sense of relaxed luxury.

For clients who plan to live in their home for years to come, the bathroom’s aging-in-place elements—including a curbless shower and sauna—are a welcome addition. This serene space inspired by sumptuous hotel spas was truly designed with multiple custom details that make it feel like home. QR