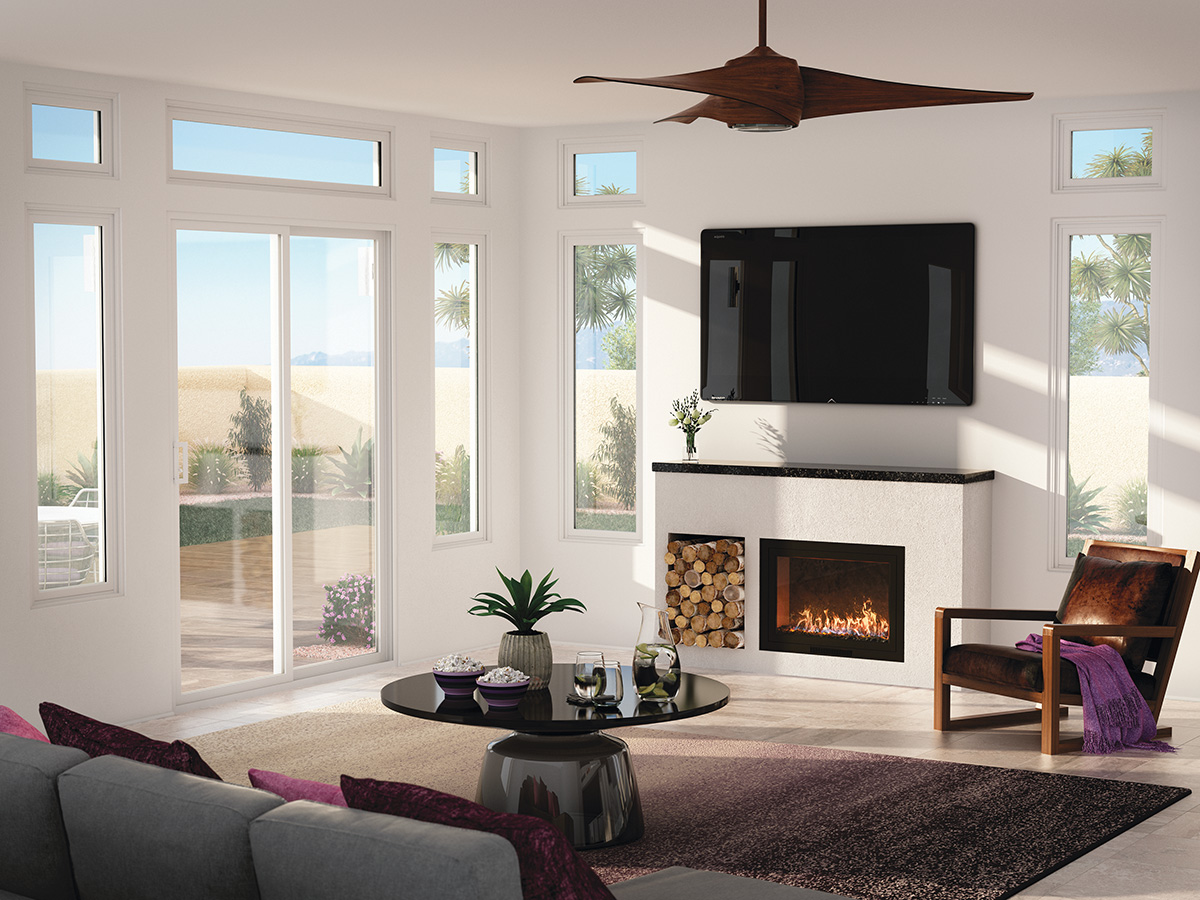 Designed with contemporary tastes in mind, Milgard Windows & Doors’ Trinsic line offers a narrower frame, allowing for larger glass expanses. The windows’ hardware has been minimized, as well, for cleaner lines inside and out.

Consider the many demands we place on a modern replacement window: We want it to keep out the elements while remaining transparent, allow clear views in and out while limiting solar heat gain and UV radiation, and perform these tasks while also elevating a home’s overall appearance. Wrapping these seemingly conflicting requirements into a single product is obviously a challenge, but today’s replacement offerings are proving themselves up to the task, providing efficiency, performance and style in equal measure.

And beyond addressing these homeowner requirements, manufacturers also are seeking to address remodeling contractors’ pain points. Perhaps even more so than homebuilders, remodelers are seeing pressure to meet homeowner demands for speedy project completions in the face of a construction labor shortage that’s only growing more severe. As a result, window makers are widening their lists of installation options and working to ensure consistent turnaround times to help contractors maintain their schedules.

Homeowners generally begin shopping for replacement windows when they recognize their existing units are falling short. Maybe they’re feeling air infiltration on chilly winter evenings or are concerned about noisy rattling as gusty winds pass over. As a result, performance characteristics—especially those affecting their homes’ energy efficiency—are often top of mind when their conversations begin with window dealers or remodelers.

The familiar U.S. Department of Energy’s (DOE) Energy Star label is generally a starting point, in terms of desired performance, along with the requirements of any local energy-efficiency rebate programs, says Erik Ashcraft, product manager with Milgard Windows & Doors. Because the technical details of what qualifies a window for Energy Star or efficiency incentives aren’t as familiar to buyers, the DOE’s label or efficiency program guidelines can serve as an easy shorthand for a desired level of performance.

“If you need to get down to a 2.8 U-value for a rebate, that’s what’s driving decisions,” Ashcraft says. “Some might be more savvy but, by and large, they’re coming in looking for a [higher] level of performance.”

For most replacement-window buyers, dual -pane replacements with low-E coatings and argon gas insulation are the go-to option, says Kris Hanson, senior manager of product management with Marvin Windows and Doors. “What we are seeing is that, typically, the windows being replaced are very energy-inefficient, so the bulk of the market is dual-pane, insulated glass,” he says. “It’s a real upgrade, usually, over the windows being replaced.”

At the higher end, though, Pella is seeing growing interest in more advanced designs, according to Nicolle Picray, the company’s brand communications and public relations manager. “More homeowners every year are choosing to upgrade their glass to triple pane—these customers are often looking to not only reduce their energy bills, but also increase the level of comfort in their home,” she says. However, she urges remodelers to focus their customers’ attention on a window’s tested performance, if they seem to be leaning toward triple-pane designs out of an attraction to the latest bells and whistles. “It’s important for consumers to remember that the most important factor is the rating,” she adds. “In many cases, our dual-pane products with argon will perform better than some triple-pane products in the marketplace.”

While the basic dual-pane design hasn’t shifted much in the last decade or so, manufacturers are seeing advances in the glass they’re using to create these products. The improvements include changes in which surfaces of the two panes are treated with low-E coatings in some regions of the United States and Canada. For example, Milgard’s Ashcraft notes, while most dual-pane windows have long featured a coating on the exterior pane’s inner surface—what manufacturers call “surface 2”—glass manufacturers have begun suggesting a second coating on surface 4, the roof-facing surface of the inner pane, especially in northern climates.

“It’s helping to alleviate heat loss,” Ashcraft explains. “Overall, the goal is to maintain a more consistent temperature within the home. The glass companies have found through their research that this is the approach that works the best.”

“The outside panel is almost a sacrificial pane,” he says, while a transparent film over the exterior surface of the interior pane keeps that piece of glass intact. The evaluation process for this design has involved shooting 2x4s out of a cannon at the test units. “The amount of [force] that glass panel can take is pretty significant.”

While consumers’ replacement-window performance requirements might not have moved much in the last several years, their design preferences have shifted significantly. At the top of this list, a move to more contemporary lines and colors first spotted five or so years ago has accelerated.

“Demand is increasing around what [we] refer to as modern design factors,” says Cliff Birch, Jeld-Wen’s director for aluminum and vinyl products. “Homeowners want more glass and less frame.”

Andersen’s Jackson agrees, noting “the windows are certainly not getting any smaller. In many times, it’s bringing the outside elements in—they really want to enjoy the view to the outside of the house.” And, he adds, consumers are more interested than ever in turning the smaller frames into decorative elements, both inside and out.

Not only are buyers seeking darker exterior finish options, they’re also looking for the option to have different finishes on their windows’ interior and exterior sides. “It’s something that’s showing up,” Jeld-Wen’s Birch says. “I definitely think it’s something that’s going to grow in demand.”

Birch certainly isn’t alone in noticing the interest in finishes that add a stronger visual punch. “It used to be white would be at the top of the list, but now white and black are neck-and-neck; third is craftsman bronze and fourth is obsidian,” says Jeff Kibler, architectural and commercial manager with Weather Shield Windows & Doors. “And we’re starting to see an influx of more of the metallic finishes—it’s a byproduct of the contemporary movement we’ve been seeing.”

Matt Widlowski, Windsor Windows & Doors’ business development manager for the remodeling and replacement market, says consumers are even looking to mix up frame and sash colors. This can mean, for example, a black-finished sash with a white frame on the interior side. “They’re trends, definitely,” he says, noting this bi-color approach is still at the fringes of the market. “But you have to offer all options to honor their requests.”

Similarly, hardware tastes also are evolving, with interest in metallic brass fading in favor of matte and rubbed metals, instead. “Be it an oil-rubbed bronze or a satin nickel finish, homeowners want something that’s sleek and smooth and complements the window,” Andersen’s Jackson says.

And, in some cases, hardware is becoming so sleek that it’s disappearing from view entirely. Ashcraft says this is the case with Milgard’s Smart Touch hardware. Built into the top rail of a single-hung window’s bottom sash, the hardware serves as both handle and lock. When it’s in the locked position, it recesses into the rail, becoming almost invisible.

While updating designs to meet changing consumer tastes, manufacturers also are looking to ways to make remodelers’ lives easier as well. Leading the list of remodelers’ pain points that today’s replacement window makers are seeking to address is the challenging labor shortage facing the construction industry across the United States.

Marvin’s Hanson backs up the earlier observation by Widlowski regarding mixed sash/frame finishes, saying “that idea has really taken hold.” And more remodelers are requesting these designs be prefinished at the factory. “We think it’s largely a response to labor shortages. Skilled labor, as a whole, is just a real problem in our industry.”

Matt Craigmile, manager of Windsor Windows’ Revive product line, notes that remodelers his company works with are looking for a range of additional factory requests, beyond just prefinishing. “We’re seeing a trend toward homeowners and remodelers requesting us to provide painting and staining in-house and predrilling installation holes in windows. The labor shortage is hitting all areas of the country, so they’re looking for manufacturers to provide solutions.”

Noting that “time is money” for remodelers, Jackson says these building pros also look for anything that will save them time in the field. For Andersen, this means packaging any needed fasteners and sealants in with the window. Overall confidence in their suppliers is also a remodeler requirement, he adds. “I think a lot of remodelers are looking for someone who’s a partner in the industry and a resource they can reach out to.”

Of course, confidence is a trait built over time, and being consistent in delivery practices is one way manufacturers can earn it, according to Windsor’s Craigmile. “The biggest thing for them is on-time and complete,” he says. “They’re scheduling crews so far out in advance that, if you miss shipments, it causes a lot of problems.”

In the end, though, what remodelers really want is satisfied customers. Window-replacement projects, Marvin’s Hanson explains, offer an opportunity to give homeowners even more than what they expected.

“Homeowners are writing a big check and hoping it goes well,” he says. But remodelers who take the time to walk these customers through the full range of finish and functional options have a chance to turn what many consider a commodity upgrade into more significant work, he adds. “It’s really an opportunity for homeowners to reimagine the space they live in.” QR

The Next Big Thing

Window replacements often come with a corresponding upgrade in window coverings, and window manufacturers have begun making inroads into that business as well. For example, Marvin and Andersen offer shades that mount unobtrusively into a window’s sash or frame, and Pella offers a shade option installed between the two panes of an insulated glass unit. But what if you gain the privacy benefits of blinds or shades without need for any window coverings at all?

This is the promise offered by electrochromic—or “smart”—glass, which is becoming more of a presence in other glazing applications. This glass features a coating that reacts to an electrical charge to darken or lighten. “So you just flip a switch and you don’t have to have blinds,” explains Jeff Kibler, Weather Shield’s architectural and commercial manager. 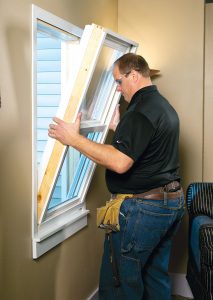 Similar products have been used in interior commercial applications for a decade or so to allow added privacy to glass-walled offices and conference rooms, for example. More recently, aircraft manufacturers have begun using the technology to eliminate window shades. Window-seat passengers of Boeing’s new 787 Dreamliner now can find two-button controls instead of pull-down shades. And centralized window controls, paired with color -shifting LED lighting, allow flight crew to create night-like environments that can help passengers get some shut-eye during long-haul journeys.

While the technology isn’t yet offered for standard replacement-window offerings, Kibler for one is hopeful it will be someday soon. “We’ve been waiting for it in our industry for a long time,” he says. “We’re hoping to see something we can get into our markets.”

Product Trends: Finance Is Your Friend

Product Trends: Opportunity of a Lifetime

Roofing Trends: Above & Beyond

Product Trends: Eyes of the Home