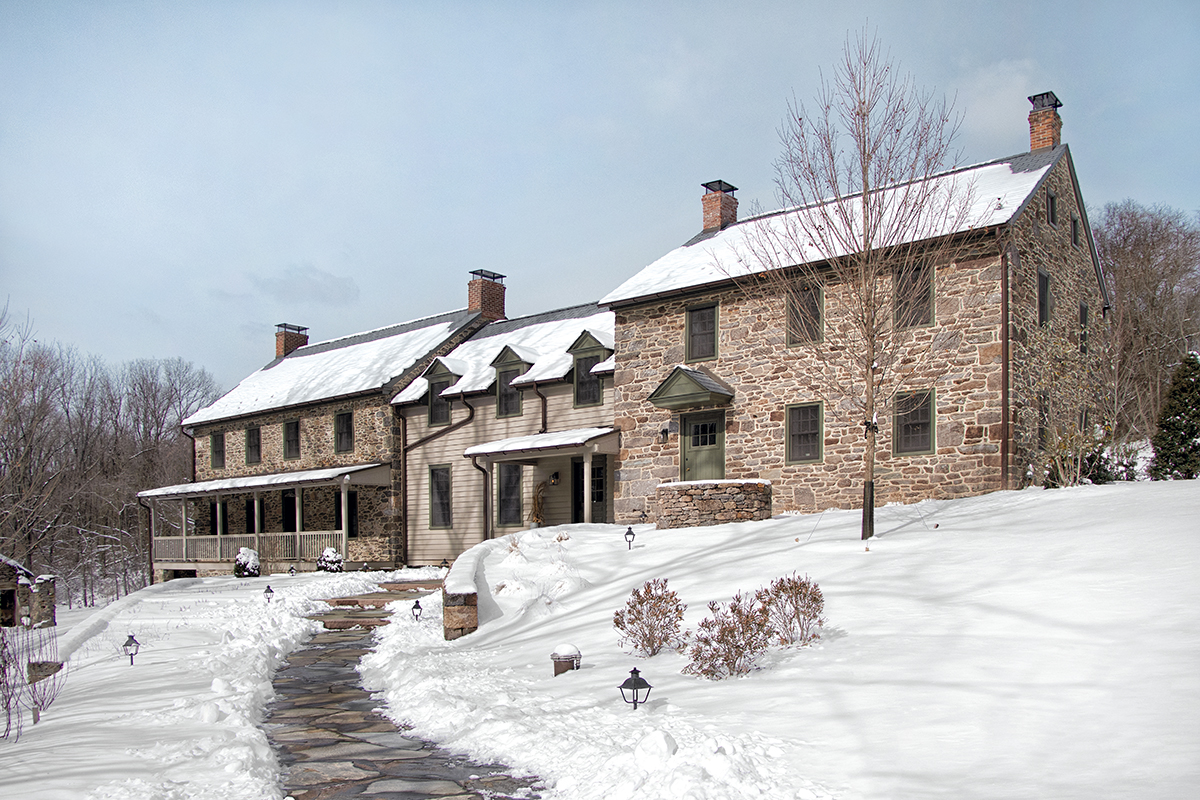 Two distinct stone buildings, sited just 40 feet apart, had been vacant for years after serving as individual houses on an old peach farm. Zoning for the property allowed only one home on the lot, so the owners wanted to maintain both original structures and create one residence from the two buildings. They solicited Sullivan Building & Design Group in Quakertown, Pennsylvania.

The company previously transformed a barn on the property into a man cave with entertainment space, as well as storage for their motorcycles and four wheelers. This new project required ingenuity because each of the stone structures had functioned as a stand-alone unit complete with kitchens, bathrooms, fireplaces and heating systems. In other words, the two buildings needed to complement one another. 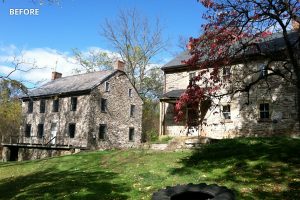 Constructing a new central living area and kitchen between the original structures offset the 200-year-old farmhouse style with a clean, modern look. The company had to consider the scale and proportion of the existing buildings to make sure the addition blends seamlessly. Now, the single-family home appears to be authentic and captures the essence of a traditional colonial farmhouse.

From the beginning, the company anticipated a modern renovation that would connect the 1800s structures and merge the different styles. Focusing on the living space between the two buildings presented an opportunity to design an upgraded core for the home. A walnut kitchen and custom-made staircase with built-in storage—plus a glass and metal railing—help generate a warm ambience. 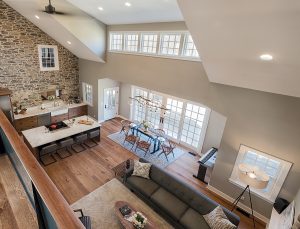 “The way we developed the space between them [meant] the stone walls [became] interior walls, so the interior of the house is actually exposing the exterior of the original houses,” explains Neil Sullivan, owner of Sullivan Building & Design Group. “We had a number of openings [in the existing walls] that were changed to accommodate the new addition that joined them [together].” 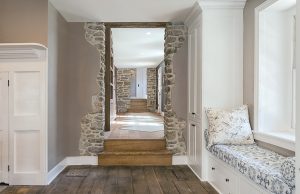 The challenge for Morris and Bailey Stonework centered on making the exterior gable walls look normal in an interior setting. The full-service masonry contractor converted some of the windows into doorways and left others alone, such as the one above the new kitchen. Carving out openings in the 18-inch-thick stone walls permitted access to the addition from both the original structures.

“The stone masons did a fabulous job of making sure the holes that we cut were sound, and the way they interlaced the new stone to fix the openings that we created was superb,” Sullivan says. “It was a combination of our stone masons and interior plastering contractor [developing] a way to make that opening blend the old plaster and be able to visibly see the stone that’s beneath it.” 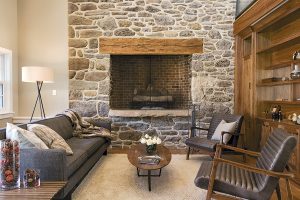 An existing fireplace opened into one of the farmhouses, but Morris and Bailey cut a hole in the stone wall so that the fireplace could turn around and face the new living space. “The height of the hearth is the height that it would’ve been if it was on the other side, where it originally was,” says Sullivan, who has remodeled many historic stone farmhouses in southeastern Pennsylvania.

The original structures contain different floor elevations, which required Sullivan and his team to compensate for that disparity in the addition. First, they determined the existing grade and forged a level area for the new living space. Then they used the thickness of the old stone walls to install stair treads on each side to facilitate traffic flow through the addition from both the existing buildings.

“These are old farmhouses that generally have a rustic feel, and we wanted to create an overall effect that was relatively seamless, even though the interior of the new part is clearly a lot more contemporary than the other two sides, which [were] pretty much restored,” Sullivan says. “The main rustic details of the 1800s farmhouse are still firmly intact—a lot of exposed beams and wood floors.” 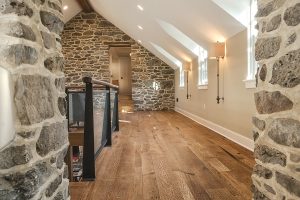 The company gutted both the original structures and refurbished the historical details through its millwork division, Cider Press Woodworks. Some of the existing wood floors remained in place and did not necessitate much repair. Cider Press Woodworks also handmade all the components for the walnut kitchen, staircase and the glass and metal railing that runs throughout the addition.

“The continuity [and] the softness of the wood clearly lends itself to putting a project together,” Sullivan explains. “We did very little to [the floors] in order to create that softness and original feel of the wood. [The boards we did install] are what we call character-grade, so there are some knots in them and they tend to look like they’ve been there a long time, but they’re brand new.” 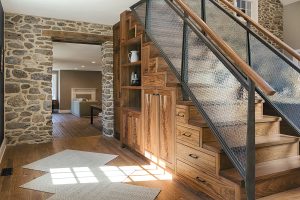 Before the project, the existing buildings displayed exterior façades that did not match exactly despite their comparable composition. After sandblasting, the structures show more similarity. “Stone farmhouses in our region typically are done by collecting stones from the surrounding areas,” Sullivan says. “It may look different [over time], but the stone is pretty consistent throughout.”

One of the buildings already incorporated a front porch, but the attachment did not include a roof and appeared particularly weather-beaten. Sullivan inferred the structure had been covered in the past, so the company updated the platform with a roof and expanded the depth of the space slightly. The back of the building also encompasses a porch now after being added during the construction process. 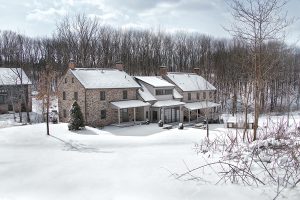 The company needed to combine the utilities of both structures into one building because each of them contained a complete system. Sullivan housed many of the utilities in an existing basement, replaced every window and inserted insulation in the ceilings, where the greatest amount of heat loss occurs. Framing the interior walls of the original structures improved the building envelope.

“Basically we started from scratch, so everything was removed and radiant heat was added to the [new living space], and air conditioning and heating was added to the other two, which of course traditionally had just the big, walk-in fireplaces,” Sullivan says. “Since we weren’t [leaving] any stone exposed on the inside [of the original farmhouses], we used 2-by-4 walls with R-13 insulation. The other side is still 18-inch-thick [stone], which equates to a R-1 energy factor.” 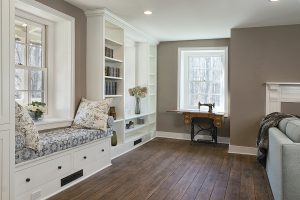 Sullivan and his team worked closely with the clients, who actively participated in the project—especially during the selection process. The company has been tasked with constructing another home on their property, a modern glass house at the edge of a wooded area. But the quaint charm of their revamped colonial farmhouse should continue to exhibit character for another 200 years.

“The integrity of the design was to maintain an image and then update it, so that it had all of the features that people want today—as well as the original look of the building that was intended,” Sullivan adds. “Many times, you don’t have a full concept of the final result until you’re actually standing there looking at it, deciding what to do.” | QR