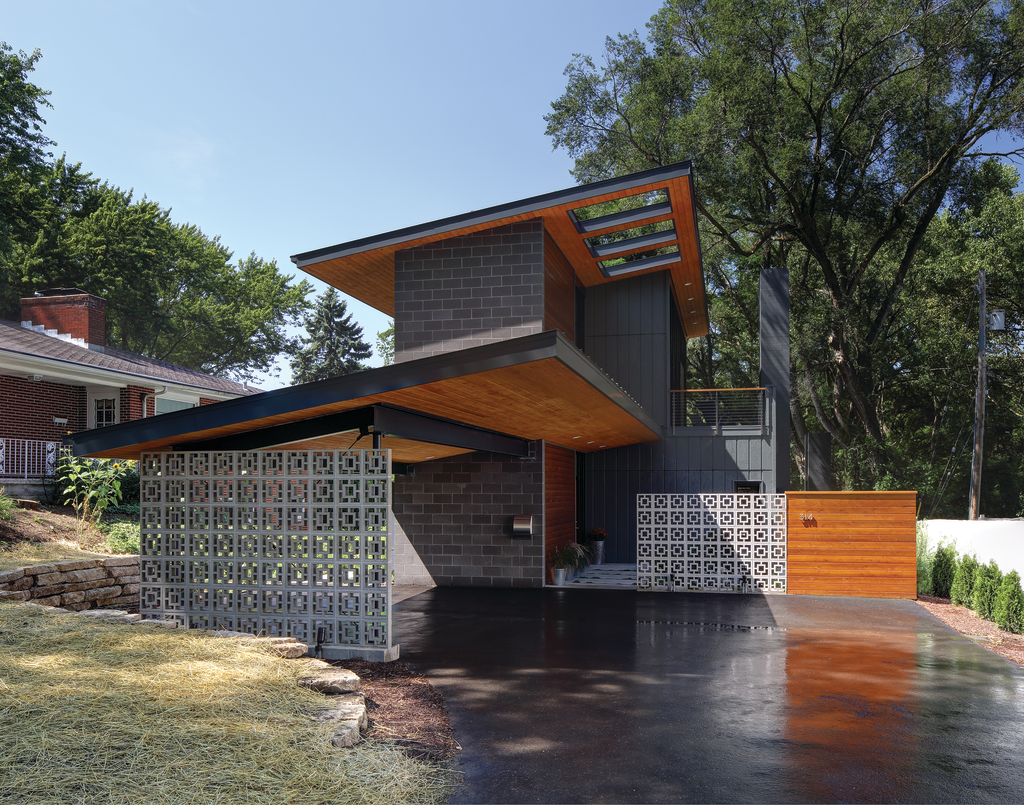 Some remodels are a collection of upgrades and tweaks to an existing home, but others are nothing short of transformational. The Midvale Court House in Madison, Wis., is the latter of these. With the right mix of design and visual strategy, a run-of-the-mill house was reinvented as livable art.

When they purchased the 1,685 sq.-ft. house, the owners knew it needed some work. It is located on a busy street and although it is set back in the lot and protected from traffic, the result is that the inside of the house felt dark and closed off. The owners happened to read an article in a local magazine highlighting some of the work of Milwaukee-based Bruns Architecture and were impressed enough to reach out to the firm to take on the remodel of their new home.

“The original home was in disrepair. Its layout did not function well for modern living, and previous updates only disconnected the spaces with incongruent finishes,” recalls Stephen Bruns, principal at Bruns Architecture. “But the bones of a thoughtful mid-century modern ranch were there.”

Bruns saw something he could work with and engaged with the homeowners to find out more about what they wanted to see in the home. “The owner’s wish list was pretty simple: add a master suite to the two existing bedrooms, provide a carport, and improve the function of the remaining spaces,” Bruns says. “The design solution also added a proper entry and created a series of private and semi-private outdoor spaces – or rooms – which contribute to the success of the house.”

To achieve these goals, Bruns carefully examined the home the way a sculptor studies his medium. This allowed him to rethink the way the house functions and determine what could be done with what was there.

“Our design process began with a study of the existing physical conditions to help us understand what we were working with,” Bruns explains. “This includes studies of the existing structure, available views, adjacencies, solar orientation and environmental influences. We then overlaid the owner’s programmatic needs and identified intersections that could inform potential solutions. Through the resulting diagrams, we generated design concepts that met the project goals, perhaps in different ways. This renovation is the development of one of our initial conceptual schemes.”

The project included an 840-sq.-ft. addition, which included an elevated master suite. The addition of raw square footage was certainly helpful in creating a more livable space, but Bruns was able to take it step further by quite literally thinking outside the box. A series of complementary outdoor spaces are designed to extend and enhance the interior rooms. This is all part of a purposeful experience that Bruns and the homeowners wanted to convey when someone walks into the home.

“The sequence that one experiences when entering the house and moving through the spaces is unique and quite powerful,” Bruns says. “Even before passing through the entry door, you are once removed from the hustle and bustle of the street within a serene entry court. Throughout, there is a series of relationships between interior and exterior spaces that are experienced together as extensions of each other.”

The entry is a key to the flow of the entire home and informs entrants of the kitchen on the first floor and the master bath on the second floor. A wood stairway and complimentary cable railing system meshes with the floor on the main level that further transforms into the ceiling surface, and the master bath features a wood ribbon that folds up and over itself in a spa-like fashion.

The unique cable railing system used throughout the home lends a modern, industrial look to the interior, which sought to portray a somewhat museum-like aesthetic with subtle all-natural undertones of the surrounding environment. The homeowner originally considered a custom fabricator to produce the desired railing, but going that route would have put far too much strain on the budget.

Instead, Bruns turned to AGS Stainless, a railing system manufacturer, to create the appropriate look at a much a lower price. Stainless steel cabling melds with wooden hand railings that blend nicely with the wood in the floor and other interior touches. It provides the appropriate aesthetic and the transparency of the cabling opens up the space.

“The owner was going for a modern, delicate look. Our product has such clean, minimalistic lines, and stainless steel cable was a perfect fit,” says Kevin Harris, director of sales and marketing with AGS Stainless. “You put wood on top of the stainless steel, and it doesn’t just look modern, it looks beautiful. The beauty of stainless steel is very flexible. It looks great in any environment.”

The transformation of the house, both inside and out, is so complete, it would be easy to mistake the finished product as a brand new home. But it is a remodel that worked with the existing skeleton of the old house.

“Despite how different the new house appears, we used, or saved, all of the original structure,” Bruns explains. “Adding the second level over nearly half of the house was invasive. But in doing so we were also able to raise the ceiling height in all of the primary public spaces below the new master suite. This allowed us to create a spatial hierarchy that wasn’t realized in the original house.”

Accomplishing all of this was a big job, and Bruns stuck with it from start to finish. “We began looking at the project at the end of 2011. Our design work took approximately five months, and the majority of construction was performed over the subsequent seven or eight months,” Bruns recalls. “There was additional detail work, especially on the exterior, which was finished the following spring. We remained a part of the project throughout to help maintain the design intent that we established with the owners during the design phases of the project.”

The Midvale Court homeowners are thrilled with of their new-old house Bruns take a lot of pride in the work that was done. “The owners are really enjoying the spaces and entertain regularly,” Bruns says. “If I had to identify one element I was most proud of, for me it would be how significantly the house was transformed. No one believes that the original house was used so extensively to create what you now see. They think we razed the old house and started over. But it is all there, and through a collection of surgical edits and proportionate interventions, the house has completely changed experientially.”