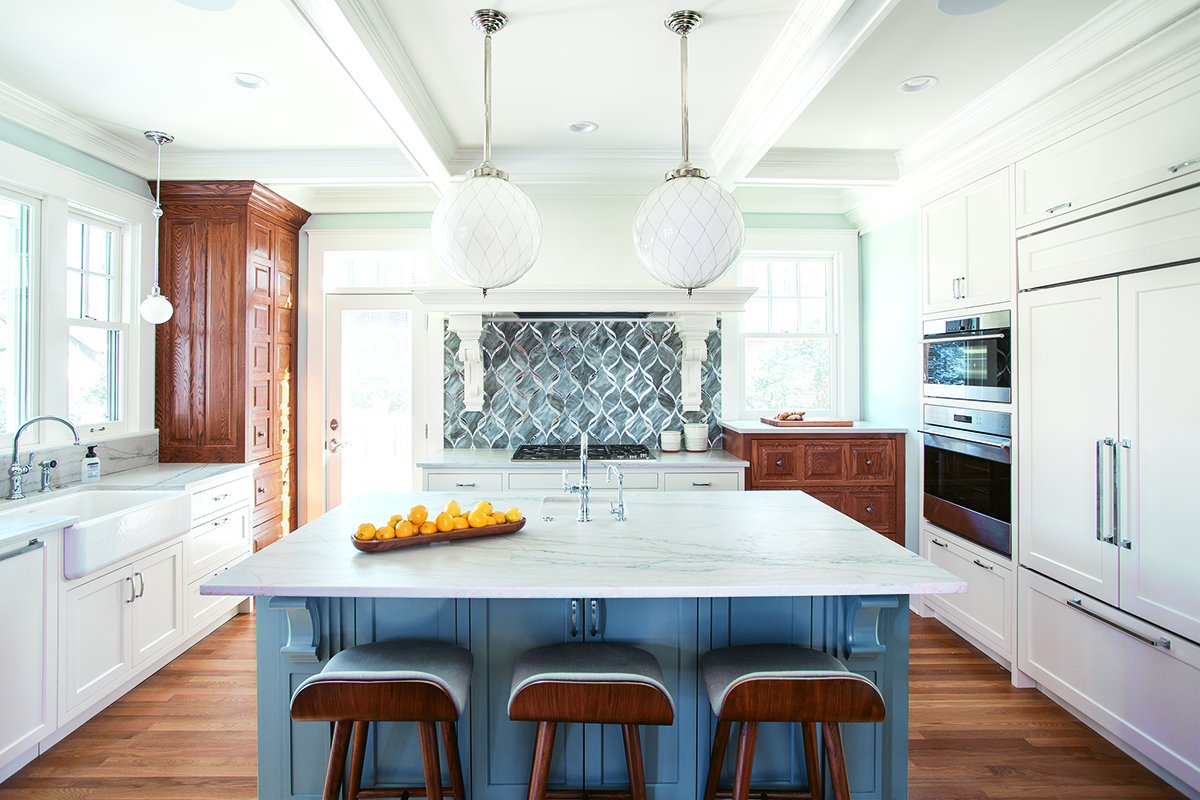 The owners of a traditional-style home in St. Paul, Minnesota, adore their house, but they did not care for its interior design. Built in 1909, the residence had largely been preserved over the years other than a kitchen that underwent an ill-advised remodel in the 1990s. Pickled bleach cabinetry and a dark, cramped layout inhibited the active family of five and compelled them to seek a resolution.

“Everything else in the house had been kept really well,” says Gina Vozka, architect for TreHus, a design and remodeling company in Minneapolis. “The dining room was the original hardwood, [and] the stonework on the fireplace in the living room was the same as it had been when it was built. Everything was very traditional—and that was just a jarring [renovation] when they did it.”

A close relative suggested TreHus because the company successfully remodeled his kitchen and took care of some other projects for him. In fact, TreHus had completed a number of jobs for various friends of the homeowners, so they felt comfortable hiring the company to renovate the interior of their house and redefine its character by mixing traditional architectural aesthetics with a few modern twists. 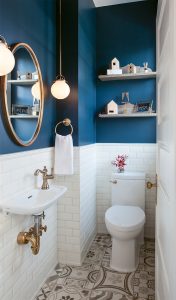 The existing kitchen, which included a bulky island, constricted movement throughout the space and obstructed natural light. When people entered the house from the garage, they came into the kitchen and did not have any room to drop their bags or hang their coats. Relocating the doorway several feet toward the garage took the entrance out of the kitchen and helped declutter the space.

To accommodate the new door, an oversized powder room had to be condensed and pushed back toward the kitchen. The powder room was part of the previous remodel and would have needed an extensive makeover regardless, Vozka notes. TreHus used the remaining area to fulfill an item that ranked highly on the project wish list, not only for the homeowners but also their three kids.

“We added a ski storage room for them because the family skis competitively,” Vozka says. “We have a little closet in there that we jam-packed with ski storage: clips for the skis, boot warmers, shelves for the ski backpacks and helmets, hooks for the gloves and poles, and that kind of thing.”

After carving out a ski closet, the company still had enough space to create a large mudroom and install cabinetry for each member of the family. TreHus included storage areas above and a built-in bench stretching across the cabinetry as well. Patterned porcelain tiles on the floor add warmth and a traditional touch that blends nicely with the wood flooring throughout the rest of the house.

Around the corner from the mudroom, a new area to drop keys and mail encourages organization by keeping these things out of the kitchen. “A shallow, 14-inch cabinetry kind of thing, where if you come around the corner to the kitchen, you can drop your keys,” Vozka explains. “You have a mini little office there where bills and mail and that kind of thing go.” The whole backsplash is essentially a Forbo tackboard, she adds, allowing the family to pin up notes and other important reminders. 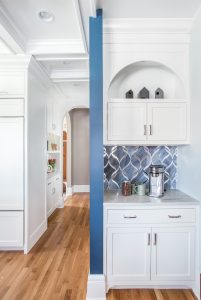 To fit the new mudroom, ski closet and powder room, TreHus had to move the south wall of the kitchen in about 4 feet. That left the company with limited space to install the refrigerator, which previously occupied the east wall, and a double oven that shifted over to suit the bigger, French door appliance. “We squeezed a lot into that area; it had to be very, very specific,” Vozka says.

“We had to flat-frame behind [the new refrigerator and oven] because we were literally down to a matter of inches to try and squeeze in all the appliances that they wanted,” she adds. “As well as keep the powder room there, and keep a door width on [either] side. It didn’t look like it was shoehorned in there, but we were down to the inch—the half inch—as far as what we could do.” 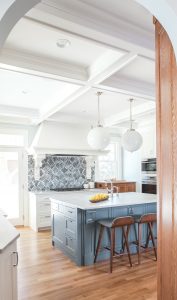 TreHus combined the kitchen with the sunroom and dining room through larger, arched openings, improving the interior flow of the home. A door leading out to the deck and a new window flank the range on the east wall, enabling more natural light in the space. Venetian plaster and painted corbels adorn the furniture-like hood that resides over the stove and a striking, stained glass tile backsplash.

The tile creates a pattern similar to slalom tracks in fresh snow, a technique the company had never tried before this project. “It’s not a ceramic or stone tile; it’s all stained glass and metallic glass,” Vozka notes. “She really liked that header because it reminded her of the ski slope, when you’re going down the hill and it makes those gentle arcs. It was interesting because that was the first time we had ever done it out of all glass. I made [us] stretch a little bit, as far as how [we] did it.”

An existing servant stair restricted the opening between the kitchen and dining room to a standard door width, so TreHus removed the stairway. Carpenters rebuilt a wider opening that looks like it had never been touched, Vozka says. The company installed new wood flooring and replaced the existing builder-grade kitchen cabinetry with custom cabinets stained to mimic panels in the dining room.

“I really wanted to pull in the beautiful woodwork from the dining room because the paneling [in there] was pretty extraordinary,” she adds. “All of the stained pieces that are in the kitchen—the proportion and detailing on that is straight from the paneling in the dining room. Then we wanted to add the color and the brightness of the white. We added more of the detailing back in with the corbels on the hood. Actually, the top of that hood is Venetian plaster; it’s not wood.” 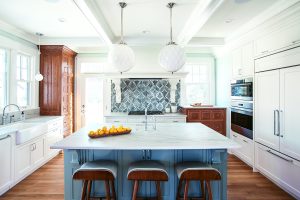 As part of the project, TreHus also expanded the existing deck to the north side of the house and built a pergola on the structure. “We took the detailing [from] the front, because they have these Tuscan columns, and we put those in the back and did a big, chunky, very solid pergola, so that they could have a place to hang out while the kids are playing in the backyard,” Vozka explains.

“[They were] really happy with how all the detail turned out,” she continues. “One of the things they do is a lot of entertaining, and I think they’ve [gotten] huge positive feedback as far as how much better the space works for having a lot of people over. Because you can do more things on the island, and it feels much more comfortable going through it. Then also as far as how they’re able to work with it around their three kids, and have them at the island doing homework.” QR

There are different types of things required to increase the interior look of any room. The flooring also plays an important role. Different types of floorings are available to do at home. Varieties of flooring with the best prices can be taken from flooring installers Sacramento https://zothexflooring.com/tile which also provides the installation services.