JCHS: Fewer Than Half of Americans Move Today Compared to 1980s

Mobility decline among younger and older demographics, housing in-affordability, and work from home all impact changes in mobility 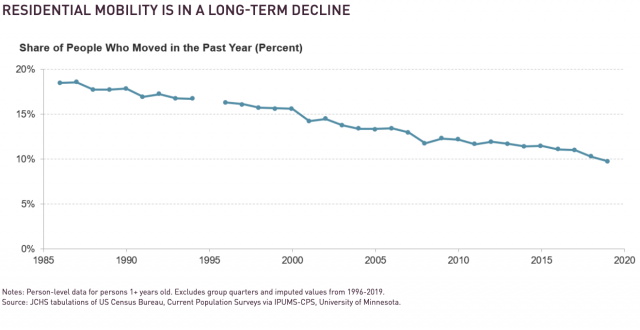 In the 1980s, nearly one in five Americans moved every year. About one in ten Americans moved between 2018 and 2019. Residential mobility rates have been falling for decades, representing a cross-generational shift, with declines particularly steep among young adults and for local moves. The reasons behind this long-term decline are unclear but have been linked to various factors, including demographic change, housing affordability, and labor. This brief discusses the state of residential mobility today, focusing on domestic mobility between and within states, and reviews historical trends in this behavior. It then examines the motivations behind domestic mobility and briefly explores the possible reasons for the long-term, secular decline.

1. HOW MANY AMERICANS MOVE EACH YEAR?

For the past five years, just over 40 million Americans moved each year, according to American Community Survey (ACS) data. That calculates to about 13 percent of Americans moving each year.

2. WHAT IS THE MOST COMMON TYPE OF MOVE?

FIGURE 1: THE VAST MAJORITY OF MOVES ARE LOCAL

FULL REPORT Notes: Person-level data for persons 1+ years old. Movers are defined as those who moved in the past year. Within-state moves are between counties in the same state. Excludes group quarters and imputed mobility numbers.

4. WHERE DO PEOPLE MOVE?

Although interstate migration accounts for less than one-fifth of all moves, this type of move is worth considering because of its important implications for regional demographic and economic change. Sunbelt states are particularly popular for interstate migrants, with Florida and Texas leading the pack, both gaining on average over 100,000 people per year since 2010. In recent years, the Pacific Northwest and other western states, most notably Colorado, have been attracting large numbers of migrants as well. While many Americans move to the Midwest and Northeast, more Americans move out of these regions each year, leaving those states with negative net flows of domestic migration. This does not necessarily equate to population loss, however, as immigration and natural population growth frequently offset any loss in domestic migrants (as I noted in a blog post about county-level mobility trends earlier this year).

5. ARE AMERICANS MOVING MORE OR LESS THAN IN THE PAST?

Mobility rates are about half what they were in the 1940s—when one in five Americans moved each year—and have been steadily declining since the mid-1980s. Local moves have been declining the most, especially among young adults, but all age groups have been moving less than in the past (Figure 2). Interstate migration has also declined substantially, but these rates seem to have stabilized since 2010 (as detailed in a 2018 blog post about interstate migration trends).

FIGURE 2: MOBILITY DECLINE IS SHARPEST AMONG YOUNG ADULTS, ACROSS GENERATIONS

6. WHY ARE AMERICANS MOVING LESS THAN IN THE PAST?

There is little consensus as to why Americans are moving less, but three factors that seem to be playing a role are demographic change, housing affordability, and changes in labor dynamics. People move less often as they age, and as millennials (America’s second-largest generation) age out of their most mobile years, some decline in mobility should be expected. The housing affordability crisis (discussed in detail in our recent report) could also be depressing mobility, with high costs discouraging moves into unaffordable areas. Lastly, the rise in dual-earner households, as well as increases in rates of working from home (especially during and possibly after the COVID-19 pandemic) could also be having a downward effect on mobility, as both dual-earner households and remote workers have lower mobility rates than single-earner households and commuters.

Since the COVID-19 pandemic is still unfolding, it is difficult to assess its possible impacts on mobility. It could be that mobility is going to spike after the quarantines end and people move to cheaper housing (if available) after losing income from a job loss. Mobility could also spike as a result of evictions or foreclosures if substantial payment assistance is not provided before the temporary bans on evictions and foreclosures end. It could also be that mobility will decline further as people become less likely to buy or sell homes, especially during the quarantines but also afterwards due to higher economic uncertainty. Working from home is likely at record high levels right now, and if even a small portion of this shift proves to be permanent, it could mean fewer people moving for job-related reasons as well.