Forecast 2021: Remodeling on Track for Growth 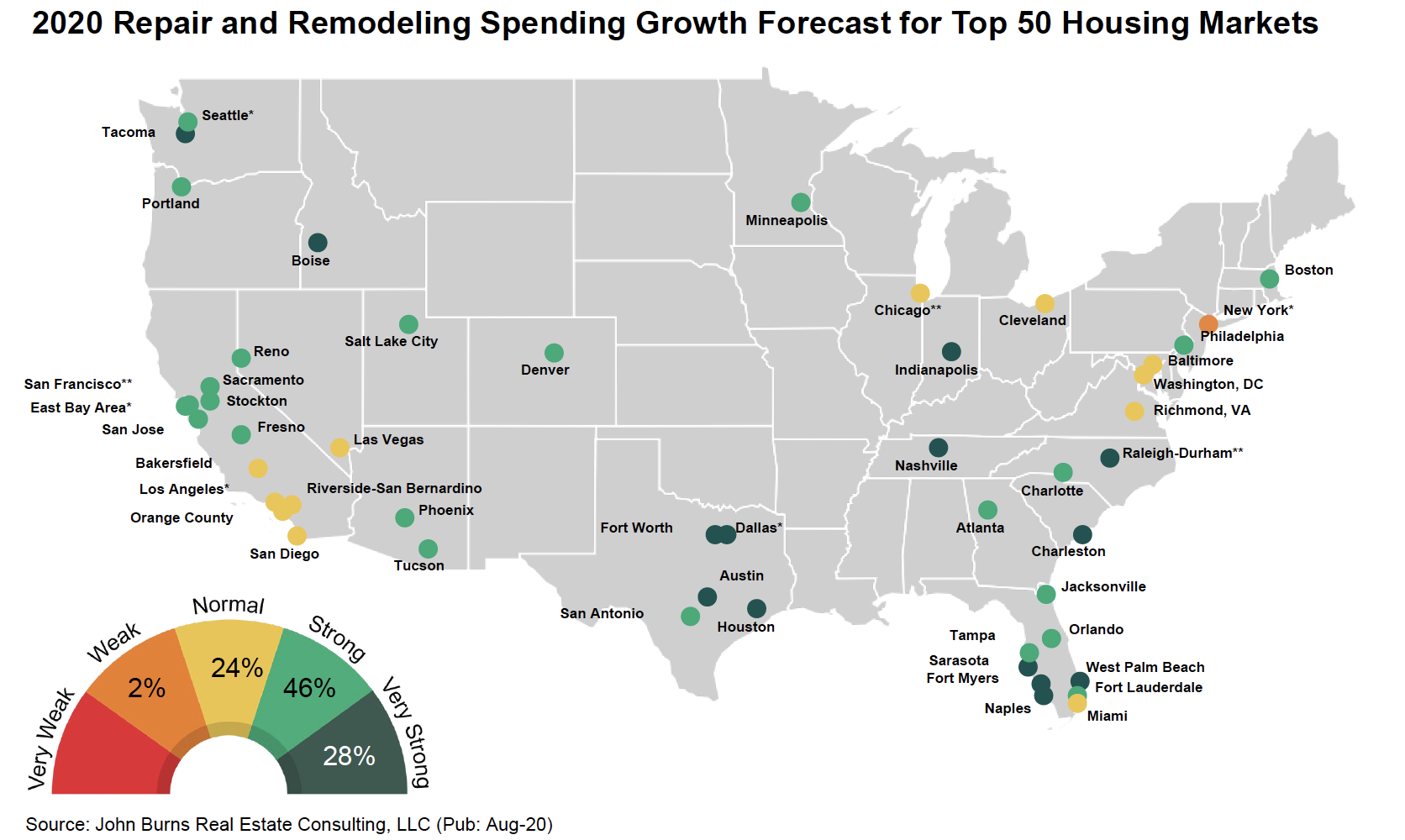 The remodeling market is set for growth in 2021. The strength of that growth varies by metro area.

After a year like 2020, forecasters gauging the remodeling market in 2021 are weighing a number of additional factors than they would in a normal 12-month cycle. Home-price appreciation, existing-home sales, age of the housing stock—these are the top three indicators for future remodeling activity. All three are looking strong in 2021. But they do not begin to tell the whole story, market-watchers say.

After the initial economic shock of stay-at-home orders in March and April, it turns out that no single industry benefited more than home improvement from the shifting consumer preferences during the months that followed. It was as if America’s 330 million residents got a good look at their homes and saw the need for upgrades. Record third-quarter numbers from the big-box retailers—Lowe’s and The Home Depot—confirmed this booming demand.

In addition to a sustained focus on the home throughout 2020, there was also a shift toward new homes, particularly single-family detached. That shift came both for move-up homes as well as small first-time buyer homes. But the new-home boom was particularly pronounced in starter homes purchased in droves by millennials—a huge cohort, larger in numbers than baby boomers—who finally entered the housing market in a meaningful way.

“This question of will the millennials own homes has been answered,” says Todd Tomalak, chief remodeling market analyst with John Burns Real Estate Consulting, Irvine, California.

“We know now that there was a pretty clear appetite from millennials. And now you’ve got this situation where they’re buying whatever’s available. It’s either an existing home, if they can find one, that they can renovate, or it’s a new home. And we know that in a lot of cases, new homes are somewhat incomplete. They need additional work the following year. So, it’s a real interesting backdrop for remodeling and building products.”

According to Burns Consulting estimates of demographic shifts, the U.S. is now halfway through a transition that will be completed by 2025 when 11 million older homeowners will age out of their homes, and 15 million younger heads of households will enter the market.

This is particularly significant because Burns’ analysis of historical American Housing Survey data shows that younger homeowners embark upon, on average, 35 percent more remodeling projects than the prior residents. “They also do 40 percent more interior kitchen and bath projects,” Tomalak notes.

Kermit Baker, director of the Remodeling Futures Program at Harvard University’s Joint Center for Housing Studies, also sees continued growth ahead in 2021 for residential repair and remodeling. Harvard, which created and maintains a quarterly Leading Indicator of Remodeling Activity (LIRA), is scheduled to release a new reading on Oct. 15.

Its prior reading in July suggests a growing market but at a much slower rate, under 2 percent during Q1 and Q2 of 2021, as a result of downward pressure from the broader economic impacts of market irregularities stemming from the pandemic. Aside from strong demand, there are rising prices for lumber as well as shortages for other building products and labor. So, the amazing summer recovery took Baker by surprise.

“I would say the remodeling market in 2020 is somewhere between a huge surprise and a shock in terms of how strong it’s been,” Baker says. “Generally, during a recession, particularly one as serious as this one, you see remodeling spending fall off. We were talking to contractors in mid-March and April, and many were about ready to shutter their businesses for the year. So, I think we need to keep in perspective how quickly and how strongly this came back.”

Baker’s colleague Abbe Will, a research fellow at Harvard who helped develop LIRA, says a number of factors—higher new-home sales, strong home-price appreciation, lower interest rates—are part of the positive picture that emerged during the summer. “Those are some of the big indicators that we’re looking at as of the last couple of months, in particular last quarter. We are expecting our next LIRA will be more positive than it has been in the last couple of releases,” Will says.

As most remodelers know, remodeling is a very local activity. There are great disparities in demand from city to city and state to state. Metro estimates of project activity are most bearish in the nation’s three largest cities, New York, Los Angeles and Chicago, while it surges in Austin and other fast-growing areas across the Sunbelt.

In addition, big-project activity operates on a separate track from repairs, and smaller home improvements offered by specialty contractors. Many large firms in the specialty segment—those who offer windows, roofing, siding, gutters, decks, sunrooms and replacement bathrooms, or a combination of these—are reporting a very big bounce dating from May through the summer and into the fall. Big-project activity is also strong in many places, but it is more dependent on local market conditions.

Big-project bright spots in 2020 included a huge uptick in outdoor living projects as well as bath and kitchen activity, Baker says. In 2020, “households have been using their homes more and a lot differently. They’ve had plenty of time to see flaws and shortcomings. They had more time to work on fixing up what was wrong,” Baker explains.

“Outdoor living is a huge category. Everyone is entertaining more out in their yard. So, for 2021, the questions are what is the financial condition of the average homeowner in order to continue spending? And are there more [projects] on their lists in order to continue working and living at home during a pandemic?”

The specialty bounce is much more broadly based and, thus, is less contingent on local market conditions. Our reporting for the QR Top 500 list in August, for example, documented a number of firms whose flow of leads have dramatically risen. In addition, many had reported much improved closing ratios on issued leads. Initially, lead costs were also lower.

As hundreds of home shows were closed and as canvassing and radius marketing became much more problematic for safety reasons, the gap was largely filled by low-cost TV, radio, print and online advertising opportunities vacated by restaurants, hospitality and other industries.

But as the summer wore on and advertising associated with increased election-year spending kicked into gear, the cost of leads has climbed, and so too have cycle times. Home improvement firms, flush with contracts scheduled 10 weeks out, are now experiencing higher rescission rates and are racing to hire installers and new sources for backlogged products like glass for windows and parts for cabinets. Our experts suggest these irregularities will be among the tempering headwinds facing remodeling activity in 2021.

Burns’ forecast for 2021—5 percent growth overall—is a combination of a 2 percent decline in activity associated with projects over $5,000 in revenue bolstered by an 8 percent increase in small-project activity of under $5,000 in revenue. “We think that 2021 going to look very similar to this year,” Tomalak notes. “This means the 5 percent growth next year is our headline forecast for repair and remodeling, but it’s very much a smaller project story.”

Complicating factors include a mixed employment picture, which is a byproduct of the sunsetting of the government’s support of businesses large and small through tenets of the CAREs Act, namely the Paycheck Protection Program, as well as extra funding for the unemployed. While hiring has been steady, travel and hospitality companies such as Disney, American Airlines, United Airlines and Delta slashed their payrolls as soon as they were allowed to do so after employee-retention provisions of the act expired on September 30.

This will result in a “bumpy” start to 2021 in the first and second quarters, followed by stronger activity in the second half, Tomalak says. And big-project activity—the lifeblood for design-build and full-service firms—will come begin to come back strongly perhaps as early as the second half of the year, but certainly by 2022.

“Our view is that before COVID about 12 percent of planned projects in process were canceled. Those were offset this year by about 22 percent smaller-project growth. Those projects, if someone still has a job, will come back in 12 to 18 months. So basically, next year small-project remodeling will continue to grow and then pivot back towards big-project growth,” Tomalak explains. “Is it possible that we see a wave of big-project activity starting Q3 or Q4 next year? Absolutely.”

Delayed and postponed projects form only part of the coming big-project wave on the horizon later next year, Tomalak says. “We’ve done a lot of work on when homes become outdated. When a home gets to be about 16 to 20 years old, or the previous remodel they did was 16 to 20 years old, everything becomes outdated—about 80 percent of the finishes become worn out.

“So, if we go through that math and determine how many big project remodels were done 15 to 20 years ago, and how many new-home starts were done 15 to 20 years ago, we have calculated that by 2022 we’ll have a pool of homes 7 percent larger than today—outdated homes the right age to be remodeled. That’s a big positive. This plus the postponed projects that would have happened this year means we are going to see this hockey stick happen.”

Accordingly, big-project remodeling is expected to grow 8 percent in 2022 and 11 percent in 2023, according to the Burns’ team forecasts.

One of the big unknowns coming out of 2020 and into 2021 relates to the impact on remodelers’ businesses of all the market abnormalities associated with COVID-19. There were two big tail winds helping remodelers in 2020. First, there was a big increase in residential demand for professional contracting services—for all the reasons articulated by Kermit Baker above. Second, the government, through the Paycheck Protection Program of the CARES Act, gave most remodelers eight weeks of operating capital. QR

According to Qualified Remodeler’s analysis of U.S. Treasury Department data, 3,101 remodeling firms received more than $150,000 in forgivable loans during 2020. This, in turn, kept an estimated 83,046 remodeling company employees on payrolls during the most tumultuous weeks of the year.

Now as the support from those loans fades away, it is an open question how many remodelers will have the business acumen to fully “right their ships” in the face of continuing market complexities—like longer cycle times and the inevitable increasing rescission rates—particularly if those contractors are on the hook for “same as cash” financing options.

Some experts see a shakeout—an increase in the failure rate of firms—particularly among smaller contractors. Well-capitalized firms will be rewarded by being in the front of the line for skilled labor, faster product deliveries and better terms from consumer-financing companies. The year ahead will be a prosperous one for remodelers, but not without some increased risks and pandemic-related uncertainties. QR