From Modern to Uber Modern

If ever there was a perfect ecosystem for a remodeling company to grow and prosper, it is the Bay Area of Northern California. Iris Harrell, past owner of her namesake company in Palo Alto, California, certainly picked the right location when she moved from Dallas in 1985. Today, the employee-owned company is prospering in the heart of a booming Silicon Valley and earning the respect of clients who consistently come back for more.

Such is the case with an active, empty-nester couple, living in Los Altos Hills, California. They had previously hired the company for an extensive exterior renovation to their mid-century home. They came back only a few years later to remodel their kitchen and great room and, subsequently, they have moved on to adjacent outdoor living spaces.

Their kitchen remodel, which won a 2016 Master Design Award gold recognition for Kitchen More Than $150,000, replaced a much more compartmentalized space. The existing kitchen was much smaller and two stair steps away from a breakfast nook. And it was two additional stairs from there to the neighboring family room. The spaces lacked the kind of connection that many homeowners seek today. 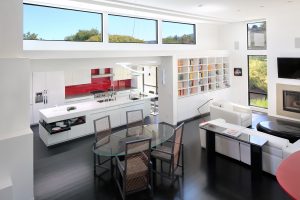 A three-person team from Harrell ran the project: Lisa Stern is the design team manager; Gloria Carlson, CKD, is a senior designer; and Scott Marshall is a project manager. According to the team (interviewed jointly), the couple was especially interested in creating a kitchen for two cooks that would work well for entertaining.

“So what they came to say was, ‘This kitchen does not work anymore. The countertops stain. It is very disconnected from the family room,’” Stern notes. “They entertain, they cook a lot and they wanted it more connected to the family room. In addition, their tastes were very, very contemporary. [The homeowner] wanted it to be ‘uber modern’—her words.” 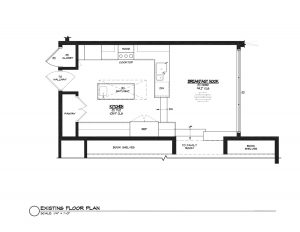 Uber modern is what Stern, Carlson and Marshall delivered, but a good bit of construction was required before they could get to the finishes. First, the floor in the sunken kitchen was raised 24 inches to match the floor height of the great room and the former breakfast nook. Stairs were relocated to the far end of the kitchen near an entry. This created a much larger design palate for the kitchen to come. Marshall says this was not tricky—he simply laid down a cross-hatched set of 2- by 24-inch beams on top of the existing floor.

Second, a massive set of bookshelves was removed to make way for a much larger, open connection to the great room. This required a new flush-mounted beam in place of the bookshelves “to carry the load of the roof,” Marshall explains. “This allowed for that huge opening you now see going into the family room.” 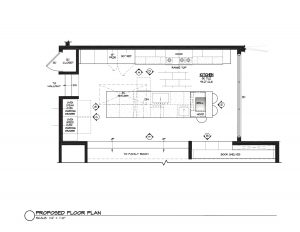 Stern says the massive opening was an evolution. “It was not clear how big of a remodel they wanted to do when we first met them. So we showed them some kind of basic kitchen plans with a window into the family room, then a little bit of a bigger window. And then as we became more involved with them, it began to be clear they wanted to open up the whole thing. It was not clear at the beginning they wanted to go that extreme.”

From there, it was on to the style and look of the space, and how it functioned with the family room. Part of the scope of work also included a new refrigerated wine room that was to take the place of a closet off the family room. 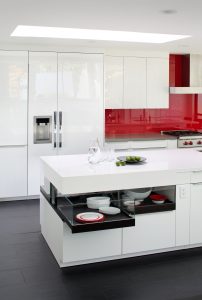 Because uber modern is certainly in the eye of the beholder, Stern and Carlson accompanied the couple to several cabinet showrooms 40 minutes north in San Francisco. At the Poggenpohl showroom they fell in love with and selected the white lacquer cabinets they chose for their island. They subsequently also used Poggenpohl for the shelving and storage space replacing the old bookshelves.

The Poggenpohl showroom also offered two show-stopping ideas that also found their way into the final kitchen. First, there was an enormous, bright red backsplash. It had previously been suggested and dismissed, says Carlson, but when they saw it in person, it clicked. The second item was a glass drawer that the cabinetmaker offered. In the showroom, a single drawer was displayed. But knowing their clients really liked them, Carlson and Stern specified a cluster of four transparent drawers for one end of the massive 15-foot island. “We took a standard item, and we customized it,” Carlson notes. Yes, that would certainly qualify as uber modern.

Supporting a very thick countertop above the glass drawers did qualify as “tricky” for project manager Marshall, who says Poggenpohl was “concerned” that the idea would be difficult to safely execute. In the end, the German cabinetmaker helped fashion a support solution for the thick and heavy countertop above. They repurposed some x-bracing elements and configured them in a pattern that would create seamless pockets for the see-through drawers. 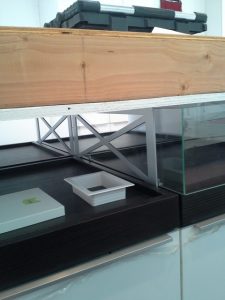 Marshall did a good bit of engineering on his own. “It was pretty complex. There is an electrical outlet between the glass cabinet and the cabinet next to it. That is actually a pony wall that ties down into the original floor to give it strength,” he says. He tied 2- by 6-inch framing members into the pony wall to support the cantilevered countertop above. A 10-foot span of plywood also added support below the cantilevered top. Marshall says, “A lot of consideration and a lot of planning went into allowing those four drawers to be clustered together.”

Other finishes helped complete the uber modern aesthetic. The previously mentioned red glass backsplash came in three pieces, “so there are only two seams,” Stern says. And two types of quartz countertops were used. The brightest white Silestone by Cosentino top was selected for the massive island, and a light gray Ceasarstone top was selected for the perimeter surface areas. For flooring, black 12- by 24-inch tiles were selected to complement the dark hardwood flooring of the adjacent family room.

Two cooks and a crowd 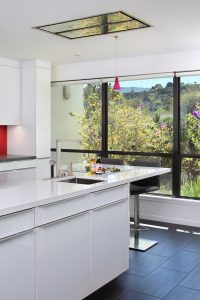 Today’s kitchens are typically designed for more than one cook. There are additional spaces for food preparation and for cooking in this kitchen as well. Both clients are proficient cooks. There are two sinks, a bank of six Miele ovens and warming drawers, and a six-burner Wolf cooktop.

Perhaps the most interesting cooking feature of the kitchen is a teppanyaki grill, like the kind you see at a Benihana restaurant, where food is prepared and consumed in the same spot. The clients asked for the grill, but were concerned about the potential loss of sight lines from any hood that might protrude down from the ceiling. That is why the one selected by Carlson and Stern is flush mounted to the ceiling. The grill is mounted in such a fashion that four people can comfortably eat while food is being prepared in front of them. It is interesting to note that the grill turns slightly concave when it heats up, Marshall notes. His theory is that this keeps the cooking fluids moving ever so slightly toward the center of the grill.

Carlson, an NKBA Certified Kitchen Designer, says she relied on the latest guidelines in creating space between the island and the perimeter cabinets and surfaces.

“With two cooks and a desire to entertain, we specified 48 inches between the perimeter cabinets and the island,” Carlson explains. “We were also very careful to consider how much landing space there is around the cooktops. Many NKBA guidelines were implemented and considered in the process.” 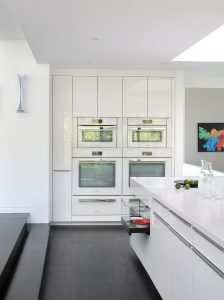 From end-to-end, the resulting kitchen is sleek, modern and filled with light. It is interesting to note that the couple had previously relied on window treatments to control the flow of California sunlight into the house. The Harrell team obviated the need for those treatments by specifying an ultraviolet light-blocking film to be placed on all of the home’s existing windows—including giant transom-like windows above the kitchen, facing the great room.

Most significantly, the clients were very happy with the result, say Carlson and Stern. “They keep coming back for more. They have enjoyed the ride,” Carlson notes. Stern says, “We have done at least two more projects for them since this was completed. They are truly what we look for—clients for life.” | QR