NAHB Remodeler of the Year: A Big Heart in Baton Rouge 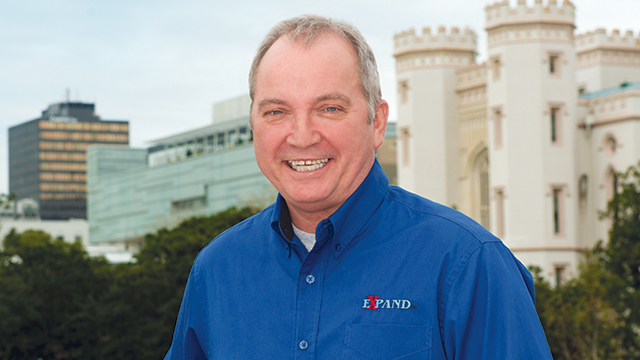 In August of 2016, Tom Ashley was in Miami attending the National Association of Home Builder’s mid-year meetings without a single worry about the rain storm forecasted to hit his native southern Louisiana. There was nothing to indicate it was anything more than a severe storm.

But when the rains came and did not stop for a few days, Tom made plans to return early. Baton Rouge soon began experiencing flooding and, with each passing day, those flood waters broke records. First it passed the 100-year and 500-year benchmarks. Eventually it was calculated to be a once-in-1,000-year flood.

Whole neighborhoods of slab-on-grade homes were inundated with up to six feet of standing water. Many residents had never seen water high enough to approach their homes, let alone flood them. In the end, about 60,000 homes—particularly in the town of Denham Springs—were damaged and in need of immediate repair. It was an enormous local catastrophe very similar to the situation many residents of Houston face in the wake of Harvey.

“With a hurricane, you at least have a few days to prepare and get ready,” Tom says. “But with this storm, we had almost no understanding of what was about to hit us.”

As owners of a reputable local remodeling business, Tom and his brother Randy were immediately swamped with calls from desperate neighbors and past clients. Those first few days were chaotic. Some company staffers’ homes were affected. Hotels were totally booked. One family sheltered at the company’s warehouse for a short time. And after the water receded, the company put its crews to the task of helping with the demolition, mostly on a time-and-materials basis.

But Tom and Randy knew innately that they could not help everyone as much as they wanted. Having been in business together since 1994, they understood the perils of taking on too much work and how it could potentially lead to business failure. In an atmosphere where hundreds of people were in need of free estimates. Expand Inc. was resolute in charging for them. And at a time when the phone was ringing off the hook, only past clients, friends and very strong referrals could be served. Even so, their list soon grew to more than 200 names. Their mother, Kathryn Mixon, was brought in part-time to return calls, set appointments and, in most cases, try to calm nerves as gently as possible while helping them find other contractors.

“It’s tough to say no to people who are pleading with you,” notes Tom, who says he needed to draw upon all of his nearly three decades of experience in construction to navigate the complexities of the Great Flood of 2016 and its aftermath. It is still playing out today. While helping everyone they could with demolition, Expand Inc. was choosy in selecting clients. Among friends and family, they gave preference to those who wanted to use the flood as an opportunity to upgrade their homes—not simply to return their homes back to what they were.

But the stress of the flood on affected clients was enormous, says Tom, who told a sad tale of a client who passed away of a heart attack two days after their remodeling project was completed. The stress seemed to lurk beneath the surface and was yet another reason Tom found it wise to keep within their limitations as a remodeling company and to work with owners looking ahead to improvements, not simply repairs.

Having long been active in the Capital Region Builders Association (CRBA), Tom’s concerns at the time were also with his fellow members. They banded together and offered several town-hall-style informational sessions with affected residents. Some of Tom’s lessons from the Baton Rouge flood were incorporated into a document compiled by fellow Louisiana remodeler Geep Moore, who assisted Houston remodelers and their clients in the immediate aftermath of Hurricane Harvey.

Indeed, it is for his aplomb at managing through difficult situations, his commitment to the larger industry, and his consistent focus on education and service within the association that Tom was recently named the 2017 NAHB Remodeler of the Year, a national honor. In a letter recommending him for Remodeler of the Year, Karen Zito, executive director of the CRBA, focused on these attributes.

“Tom has always been an advocate for furthering industry and personal growth education,” Zito writes. “Before the CAPS (Certified Aging-in-Place) classes and other courses were made available in Louisiana, he traveled to Texas to earn his designations. Since then, he has been an advocate and well-known speaker for both local and state associations for CAPS and why it is necessary as remodelers to know these things.”

Tom Ashley did not start out intending to be a remodeling company owner. The Baton Rouge native was trained as a trim carpenter while working for a general contractor in the late 1970s. When that business closed in 1981, and with a growing family to raise, he joined a large company working as a sheet metal technician until 1994, when that employer restructured and eliminated his job. It was then that he and his brother Randy became partners in a contracting business, Ashley Woodworks.

Early jobs took the brothers on the road, where they did framing and carpentry work for national hotel chains. In 1999, the Ashleys decided to shift gears to focus on residential remodeling and partner with their father Thomas Sr. and stepmother Geralyn Ashley. They changed their company name to the more consumer-focused Expand Inc. And in 2000, Tom joined the local remodeling association and gradually began acquiring his professional designations. At the same time, he began serving on local, state and national committees for the association. 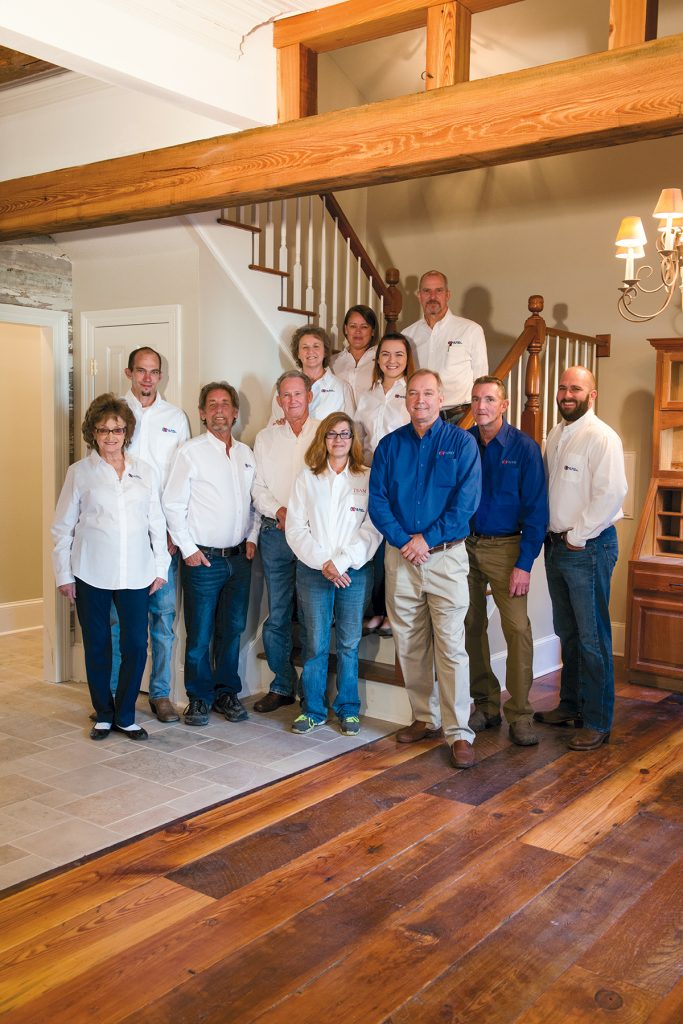 Meanwhile, their new remodeling business, Expand Inc., was growing. During its first 10 years, the company offered major improvements, generating more than $1 million annually with a total of four employees. When the downturn hit in 2009, his company had to cut way back just like many others in the industry. And when it emerged on the other side, beginning in 2011, it truly morphed into a family company.

His middle daughter, Jessica Alain; his sons, Thomas III and Weston, joined the company in the capacity of project management and carpentry. Tom’s wife, Tammy Ashley, also provided needed support to Tom and the company. Eventually, the company even added an in-house design capability with the hiring of a local design leader, John Guillory and marketing help from daughter Meagan.

Guillory, Tom says, represents an important new dimension for the firm, opening up major design capacity along with important management experience. The design services are a key reason for the company’s nimbleness through the Great Flood, he adds.

Giving visitors a tour of three upper-bracket homes on the same block—all of which were remodeled by Expand Inc. in the wake of the flood—Tom and Guillory note in detail how in each case, floor plans had been radically altered. All three sets of clients (present during the tour) tout their much-improved lifestyle. In each case, walls were knocked down to create great rooms, the flow of spaces was enhanced, bathrooms and kitchens were upgraded and, in one home, a large window-wall was added to create an entirely new indoor-outdoor experience. More than a year after the flood, all three clients were still moving back into their homes. Several neighbors, meanwhile, still occupied FEMA trailers in their front yards.

Satisfied clients like these are proof that Expand Inc. had taken the right approach in seeking improvers in the wake of the storm, Tom says. Much of it was facilitated with the addition of in-house design capabilities provided by Guillory and a local interior design firm.

CAPS and The Future

For 2017, Tom says, his company will have completed 48 jobs for $1.8 million in revenue. The goal going forward, he adds, is to grow company billings to $3.5 million and to perfect its processes. Bathroom remodels will be the driver of that growth, he explains.

“We have focused on bathrooms in the upper-cost range. It is where we are really starting to gain some speed and momentum,” Tom says. “We would like to be known as a bathroom expert in Baton Rouge. We feel like there is a lot of opportunity to learn every aspect of a bathroom, especially with CAPS. People really don’t even know they have a problem. So if we can come in there and educate them, I think we will continue to see good results.”

Universal design services and aging-in-place services, in particular, are key to the company’s future. Tom notes that he has been drawn to these types of jobs for many years. Not only is he a Certified Aging-in-Place Specialist, but he now gives CAPS seminars on behalf of NAHB.

The key trait of a good CAPS remodeler, he says, is empathy. When remodelers see what it’s like to get around the house in a wheelchair, for example, client needs take on an added new dimension.

Last year, Expand Inc. was approached by a family who sought Tom’s universal design expertise in creating a sensory room for their 8-year-old son, who is challenged with autism. For this young man, nothing is more important than to be in a place where he can experience a variety of enclosed spaces, with different lighting scenarios, rope ladders and other sensory stimuli. 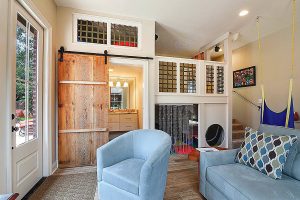 Tom and company converted bonus-room space into a two-level structure where the boy can relax and explore his private play surroundings. In fact, any kid would enjoy the space.

The success of the project was facilitated entirely with skills learned in the CAPS training, Tom says, where listening and understanding are critical. The project also highlights the misperception that universal design is restricted to aging clients. In reality, he explains, it’s about needs-based remodeling for any demographic presented with accommodation challenges.

That empathetic approach to remodeling is key to the future of Expand Inc., Tom says, explaining he hopes that “empathy” will be embedded in the company’s culture, even after he is out of the company. Tom and his brother hope to one day sell the company to their employees, who have contributed so much to its current and future success. 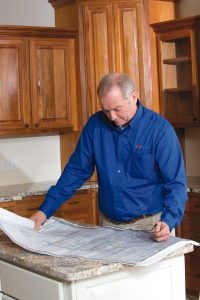 NAHB CAPS Specialist of the Year, 2016

Life Director and NAHB Board of Directors