NAHB Remodeler of the Year: A Culture of Professionalism 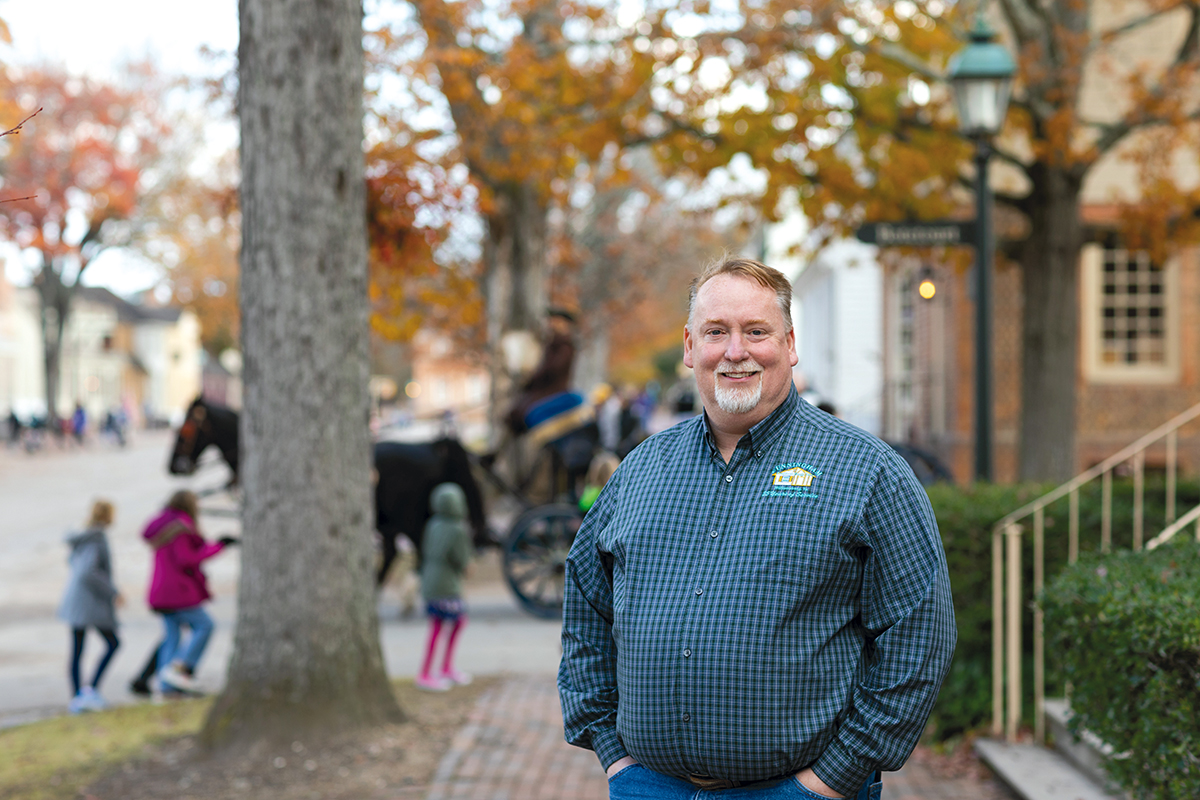 This fall, not long after Steve Cunningham, CAPS, CGP, was named Remodeler of the Year by the National Association of Home Builders, he gave visitors a tour of his design-build remodeling firm in Williamsburg, Virginia—Cunningham Contracting Inc.

In 2019, the company will push $2 million in revenue on nearly 70 jobs with 15 employees. They operate out of a showroom and office they’ve maintained for the better part of a decade. In less than a year, however, the company will be moving around the corner to lease a bigger space, now under construction, from the same landlord. This is a good thing because the firm is bursting at the seams. Steve shares an office with his wife Melissa, while other office team members split a large brightly lit room that houses almost every conceivable function of a thriving remodeling business.

It is in Steve’s office where clients sit and work through computer floorplans and renderings. The visuals are projected on a flat-screen TV that doubles as his computer monitor. From this demonstration, it’s easy to see why clients and prospects are attracted to the company. In a matter of moments, a cramped outdated bathroom is transformed and re-imagined. He is an affable and positive communicator with a great command of the design software.

The existing bath in question was standard issue—small with a tub-shower combination. In his demonstration for visitors, Cunningham offers a series of renderings that show a progression from first ideas to photos of the finished product. And the transformation is total. A closet is moved to accommodate and make a larger footprint. There is a double-bowl floating vanity. Large-format tile gives the space an on-trend contemporary look. But the sleek contemporary look of the bathroom is only part of the focus. He’s prouder of the details that make this master bath safe for his baby boomer clients who are aging but plan to stay put for a long time.

Cunningham ticks them off one by one. Every conceivable accessory and plumbing fixture now doubles as a potential fall-saving handhold—from towel bars to the shower system. It’s all capable of supporting the weight of a person. In addition, the overall space is wider, and the shower enclosure is more open with a flat threshold. Yet, nothing about the completed project says, “aging in place,” which is exactly what his middle-age, semi-retired, active clientele wants, Cunningham says.

About 80 percent of the company’s work this year will be bathrooms, he adds, and many will be for empty nesters who are either retired or soon-to-be retired. Cunningham’s training as a Certified Aging-in-Place Specialist (CAPS) fits well with his market and the work his clients want.

In this project, safety features are completely invisible while sleek design elements make a statement. This kind of result takes a ton of careful planning and execution as well as attention to detail. The credit goes to his team and its loyal trade partners. But one trade you typically will not see on a Cunningham project are tile setters. That work is done in-house and stems directly from the company’s roots. 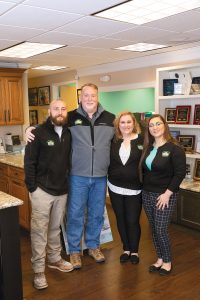 All in the family (from left): Michael, Steven, Melissa and Cristina Cunningham. The close-knit clan at work gives Steve the backup he needs to be a prodigious supporter of NAHB Remodelers, where he is a trustee and a committee chair.

Steve Cunningham remembers the December day well—December 12, 1988—when he first obtained a business license. Like many others who hang out their shingle for the first time, he remembers the moment as transformative; it was a feeling of opportunity and great responsibility. “It’s the moment you realize that you’re going to have to make it happen,” Cunningham says, looking back.

At the time, Cunningham was 23 and based in his hometown of Newport News, Virginia. The focus of his business was strictly flooring and tile. His first job out of high school was to work at a ceramic tile distribution firm, Brunk Tile & Interiors, where both his father and uncle had spent much of their careers. Tile was in his blood. Cunningham is not one to boast, but he still considers himself to be “a very good tile setter.”

From 1988 until 2007, flooring was the name of his game. During that time, he grew his employee base to five, and he moved up the peninsula to Williamsburg, where he opened a showroom. By 2007, Cunningham was ready for a bigger challenge: to be a remodeling general contractor.

Over the years he had been asked to GC many full bathroom projects and had, in fact, taken on some of those jobs. His success managing those bigger jobs gave Cunningham the confidence he needed to earn his general contractor or builder license that year.

“The business was at a point where it needed to be licensed to do that kind of work in Virginia. So we got that license. Then we got more education to enable us to get to where we are today.”

When Cunningham started his flooring business in 1988, he soon joined the local chapter of the National Association of Home Builders, where he was active for a number of years. He let that membership lapse through most of the 1990s and early 2000s. Then, as he started gearing up for his run at a general contractor (builder) license—learning and education became critically important.

Today, Steve is not only a Certified Aging-in-Place Specialist, but he is also a Certified Green Professional (CGP), and he is currently working towards his Certified Graduate Remodeler (CGR) designation. All of the designations are offered through NAHB.

In addition to classroom learning, Cunningham dramatically ramped up his participation in his local home builders’ association, the Peninsula HBA, then the state HBA before earning committee slots at a national level with NAHB Remodelers. Then, as now, Cunningham views his commitment to the association as another form of educational growth on an ongoing basis.

“I decided at the time that I was reintroduced to the HBA—being a little older and wiser—that I was going to go full on, full steam into the industry and give back a little bit,” Cunningham recalls. “I decided that hopefully my children will take over the business, and I wanted to set expectations for them about their commitment to the industry and to education, when they got to that part of their professional life. I got involved at the local level. I became president of my local association. And that led to being involved at national level to where we are today. It’s been the best thing I ever did for my business. I just wish I would’ve done it earlier.”

Cunningham has attended the International Builders Show and the Remodeling Show since 2012, bringing at least one of his team members each time. He has served on the NAHB Remodelers subcommittee for Membership and Communication and became chair of that subcommittee in 2017. Also, at the national level, he has served on the Learning Content subcommittee and is a member of the NAHBR Board of Trustees.

Cunningham also encourages his family to be advocates in the industry as well. Melissa Cunningham co-founded the first Professional Women in Building Council in Virginia in 2013. Michael Cunningham earned his CAPS designation, and Cristina Cunningham is a member of the Professional Women in Building conference. Cunningham now serves on the Home Builders Association of Virginia Board of Directors for 2019-2020. He has also been an active member of National Kitchen and Bath Association since 2012. He was president of the Peninsula HBA in 2016 and chaired his local Remodeling Council in 2017.

So when does he find time to run a business? Simply put, he’s very busy, but that is according to plan.

“I think it makes me a better businessman when I am back at work from attending these meetings or from being in group talks with other contractors around the country. I’ve tried to share my insights from these conversations when I get back here to our business,” Cunningham says. “It’s an expense. It’s an expense to my business when I am away, and it’s an expense to my family. It’s an expense to your personal life. You have to have the full support of everybody to do it. That is what makes it possible. Having the key people in the right positions make it so this can happen.” 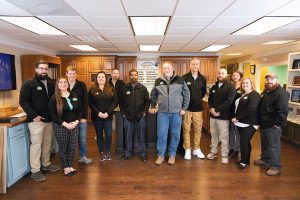 In 2008, just as Cunningham was moving into full-service and design-build remodeling, he learned a lot from contractors with whom he had worked for many years. Fellow NAHB Remodeler Robert Criner, of Criner Remodeling in Newport News, was particularly helpful and encouraging. The door was always open, and that professional network was a big reason why he was able to make the transition relatively smoothly. Another critical factor was the network of happy past clients that Cunningham had built up over the previous 20 years as a flooring contractor.

From a marketing perspective, the company keeps to tried-and-true methods that work when a company has a long-standing reputation for quality. The company sends postcards to thousands of its past clients, which never fails to generate plenty of new business, says Melissa, who runs the company’s lead-generation efforts. In addition, home shows are very big. They will let their client base know that they will have a tabletop display at a festival near Colonial Williamsburg, or some other location around town, and it gives them the opportunity to reconnect with past clients.

Another tried-and-true method is radius marketing—leaving materials in a circumference around active job sites. The company also works hard to cultivate and maintain positive ratings and reviews online. It is a member of customer-satisfaction measurement firm GuildQuality, and the company carefully reviews the feedback they get in order to improve.

Another key element to the company’s success is that they subcontract as little of their production work as they possibly can. “We do 90 percent of our own framing. We do all of our own painting and flooring. And we do most of the finish carpentry, cabinetry, everything,” Cunningham notes. “It’s one of the things that sets us apart. It gives us the opportunity to better control our timelines and the quality of what we do.”

Family and extended family are key factors in Cunningham Contracting’s success. Steve’s son Michael, age 27, has been working in the business for almost a decade. Today he is a project manager in the field. His two daughters also play a role. Cristina, age 23, helps manage the office and purchasing for the company. His son-in-law-to-be also works in the business as production manager. Melissa has been a key part of the business from the very beginning, managing marketing and other functions.

The company’s bookkeeper works full-time for the company and is the wife of Cunningham’s very first employee, a childhood friend. “Trusting somebody with your money is a hard thing, and it takes a lot to find somebody. So it’s like family even if they are not blood family; they are still family. People who work here who are not family are treated like family,” Cunningham says. QR