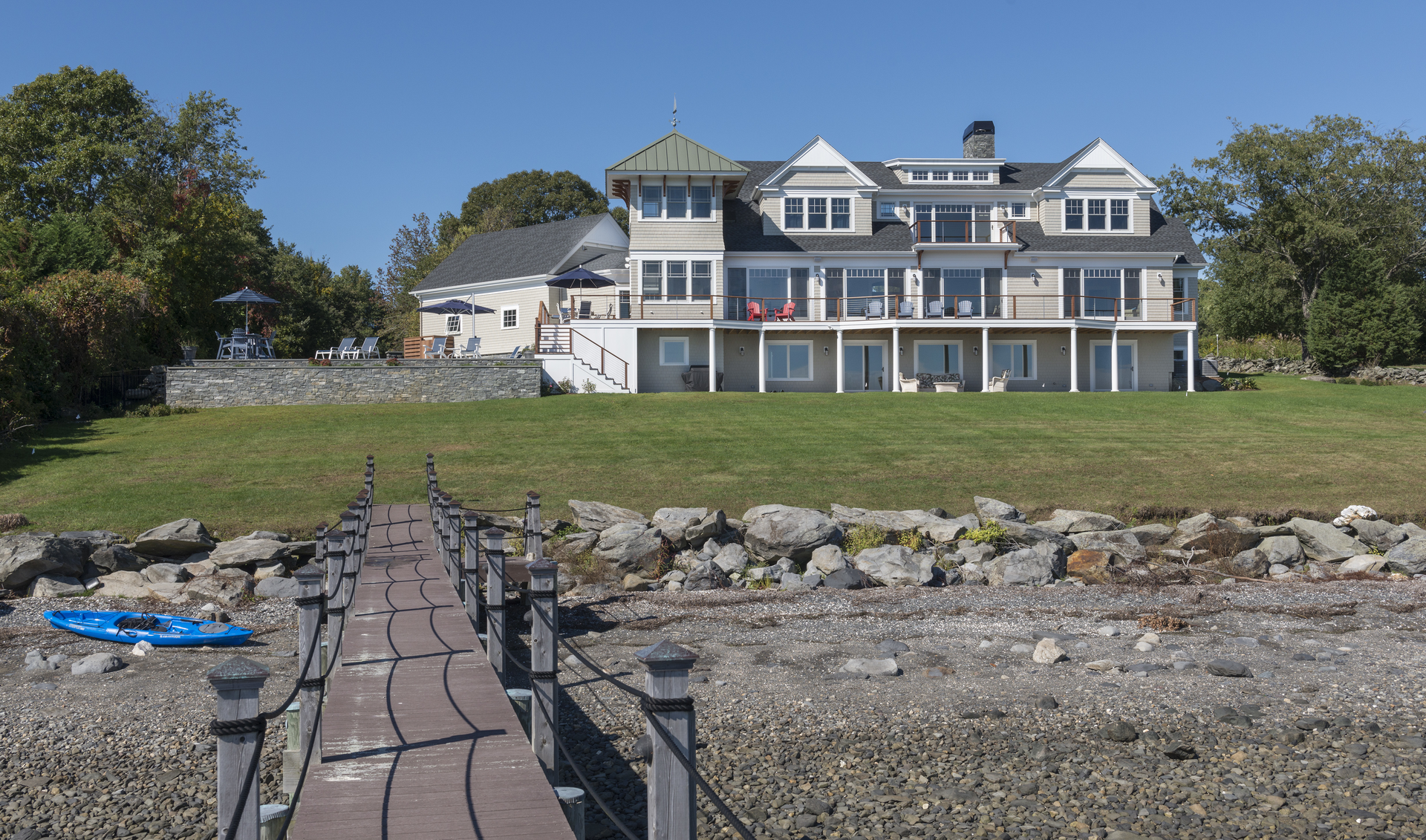 The rear edifice of the remodeled home is imposing. The new third floor is accomplished through dormers and the new tower.

On an island in Narragansett Bay, the town of Jamestown, R.I., is less than a mile from the open ocean very near the better-known vacation community of Newport. Everywhere you look, there are views of water. It is a coastal community where, not surprisingly, many seek to enjoy the rest of their days. Such is the case with an empty-nester couple that purchased a ranch-style house situated on a bluff overlooking the bay. The intent from Day One was a massive overhaul.

Matt Davitt and the team at Davitt Design Build, have been remodeling along the Rhode Island coast for many years and the company is a fixture in its community, which is why a past client referred Davitt to the empty-nester couple. In particular, Davitt’s team is experienced at handling coastal regulatory matters as well as all of the intricate coastal building requirements.

Part of the necessary expertise that Davitt brought to this project is knowledge of just how much of the existing structure to remove without triggering a demand from coastal authorities to move the house further from the water. To keep the home in the exact-same spot, Davitt chose to demolish only the main level leaving the foundation and the walkout level of the building.

The client’s goal was to create a big home with plenty of room for work, play and visitors. The original structure was 3,400 feet and the resulting home came in just over 7,000 sq. ft. Despite the doubling of square footage, the home needed to stay at four bedrooms and 5.5 baths in order to keep within the constraints of the septic system. The client’s base requirements included – a home office, a workout room, a mudroom, a fireplace on each level and an open-plan main-floor living space with unimpeded views of the water. The rest, including the exterior, they left mainly up to Davitt and team.

“For the exterior they wanted an understated elegance for the house,” says Davitt. “They wanted it to be ‘upper end’, but they did not want it to be crazy, over-the-top with big marble stairways. They wanted it comfortable but to have an elegant feel to it.”

Davitt and in-house architect John Beverage took it from there. The duo designed a Nantucket shingle-style home, a style that is inherently understated, but which is also quite elegant and dramatic when proportioned correctly.

Like most walkout homes, the front elevation stands in stark contrast to the rear elevation. In front, one could be forgiven to think that dormers had simply been added to the existing ranch in order to add a new second floor. Yes, the front elevation is transformed to the shingle style. And yes the garage has been moved, but it’s all in keeping with the footprint of the previous structure. Meanwhile, most of the drama is reserved for the three-story rear elevation, complete with a tower element that anchors the home and provides added distinction.

Form follows function in the tower, says Davitt. Up top it houses a yoga room with an inspiring view. On the main level it serves as a breakfast nook. And on the ground level, it houses the requested mudroom in Melville-esque style, complete with boat hooks for hanging bathing suits, coats etc.

The detail of the tower roof is worth noting. Mahogany knee-brackets support its roof structure, the mullion pattern of the windows, and the bulging flares at each floor are in strict keeping with the shingle-style, notes Davitt. The standing seam metal roof and the sailboat weathervane also help the tower standout.

Understanding the building envelope requirements in an area where hurricanes and Nor’easters roll off the coast from September to April is essential says Davitt. All of the Andersen A-Series wood windows facing the coast are rated DP-50, Dade County, Florida’s toughest standard for windows. In addition, all of the flashing around openings are installed specifically to stand up to the tough New England weather.

“As you build on the ocean, you have to pick products that hold up to the salt air,” says Davitt. “And you have to understand that the rain comes sideways, not straight down. You have high-wind situations all of the time. So your flashing details are critical. You have to really understand the weather on the coastline.”

Hurricane straps are required by code. They tie all of the exterior walls together from the foundation on up to the roof.

But the strict requirements of coastal construction does not eliminate the ability to innovate creatively. Knowing that water views and outdoor access are important, while at the same time providing a good defense against harsh air and weather, Davitt designed a three-panel sliding door, with a large fixed window in the center. There are four of these units across the main level of the home and a fifth on the top floor in the master suite. No manufacturer offered the exact design that Davitt sought, so his window supplier Andersen created them as custom items.

Davitt says this project is certainly in his top 10 most satisfying projects. The clients gave good direction and their budget – approximately $1.8 million including the salt-water pool and extensive landscaping – allowed Davitt and team to opt for the very best of everything. The kitchen featured Wood-Mode cabinets and a teak island, which alone came in at $12,000.

“There are great details everywhere in this house,” says Davitt. “Everything from the knobs on the cabinets to the marbles that were selected for the borders, where all well selected. This project is definitely in my top 10. It was a fun and the whole thing came together really nicely. The high attention to detail is what really makes it standout.”