Dovetail Group outfits an unusual concrete home with new windows and doors as well as an overall modern aesthetic. 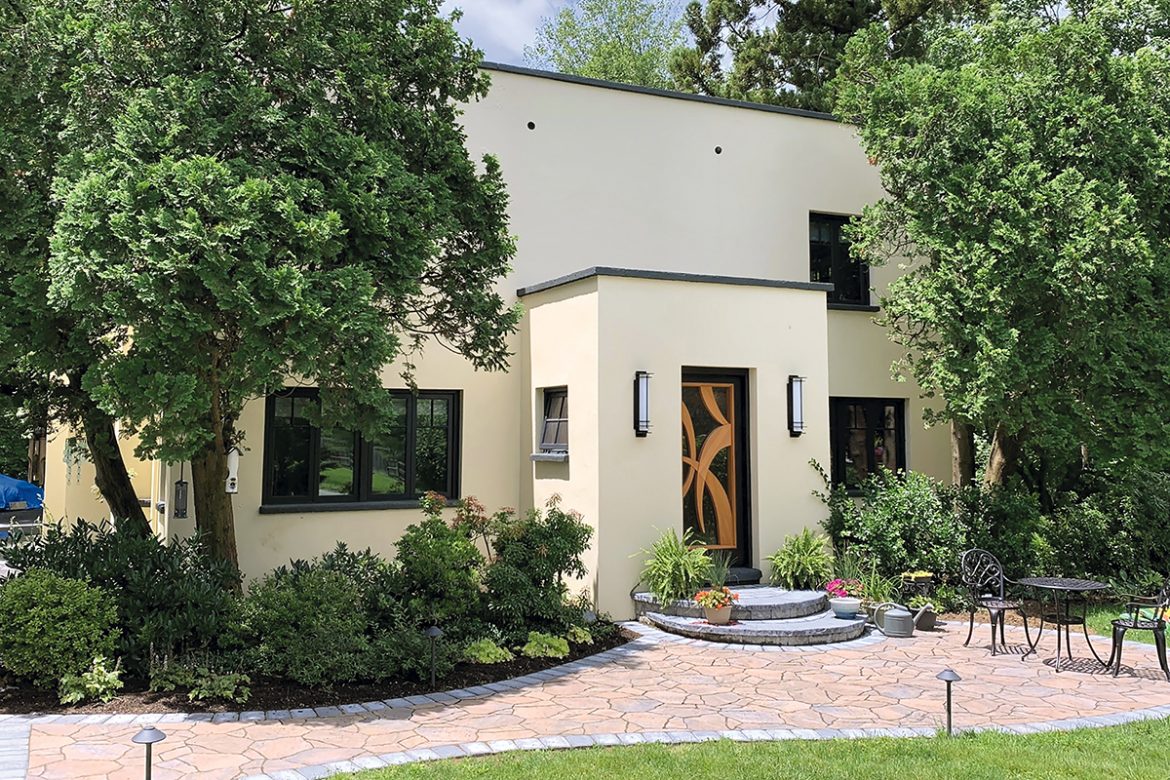 For 45 years a homeowner in West Chester, Pennsylvania, lived in his house without doing any major renovations or improvements.  He bought the property in 1975 and had done only basic maintenance to the exterior and interior since then. His girlfriend unexpectedly inherited a significant amount of money from her aunt and wanted to invest some of it into making the property more livable and presentable.

“Their house is not a normal build/aesthetic for Chester County, Pennsylvania,” says Jonathan Scholl, owner of Dovetail Group, a full-service design-build firm based in West Chester, Pennsylvania. “It’s almost a medieval Italianate style. The gentleman who built it was a concrete guy, that’s why it’s an all-block house. It had good bones but was in significant need of upgrades, particularly to make the house more energy efficient—but also more livable, more attractive and with more street curb appeal.”

The clients enjoyed the unique design aesthetic but wanted the home to adopt more of a mid-century modern Palm Springs look, Scholl notes.

Over time the existing single-pane, metal windows had rusted and began to produce drafts inside the house. Failing stucco in some areas and the degradation of caulk joints also led to water leaks that needed to be addressed. The challenge became how to install modern doors and windows in block wall openings with stucco walls and concrete sills without damaging the finishes, but still create a weather- and energy-tight installation.

“We had to do a sample window demo in the garage just to determine exactly how these things had been installed,” Scholl explains. “We came up with a plan of how to add a pressure-treated window buck into each of the openings, which would allow us to secure the new windows in a consistent manner. We could then foam the perimeter and apply some SIGA air-tight sealing tape followed by narrow Boral trim and OSI caulk to the stucco and sills. This resulted in a great fit and finish for each opening.

“We didn’t want to have to go around to every window and re-stucco [it all], so we were careful about that,” Scholl adds. “There were some areas, [such as] the wall on the driveway side where the garages [are located], that whole wall of the house did get re-stuccoed because it had enough cracks in it that the client was concerned. The whole house got painted once everything was all done.”

Dovetail Group installed new, insulated garage doors, a steel beam and post support in the garage as well as an epoxy coating on the garage floor to dress up that space. Along with new interior casing trims, electrical upgrades, a new stair handrail and balusters, plus new paint throughout, it also gave the interior of the home a major facelift. The front entry of the house was the final living space to address. The clients had not been able to use the entry in more than 40 years because it was in such disrepair.

“We cleaned up that whole front entryway, which is only about a 6 [foot] by 6 [foot] room—it’s a little vestibule,” Scholl says. “We put in a new front door, which was a really significant door that we had custom made by a factory out in Arizona. Then we did some custom tile flooring with Venetian plaster on the vestibule walls, along with a custom radiator cover and some good-looking wall sconces. It really turned into a great little space after all was said and done. The clients love it, and they greet their guests there all the time now.”

Although the crux of the project focused on functional doors and windows, the overall aesthetic of the home mattered just as much to the clients. Dovetail Group submitted several design concepts and drawings that explored different colors for the stucco, various grid styles for the windows, and a number of options for lighting and landscaping. The 3D models helped streamline their decisions.

“Aesthetic was a big part of what they wanted to bring to the end result to make it an attractive home that worked nicely and would serve them for the next 20-plus years of their lives,” Scholl notes. “They definitely trusted us and our professionalism and history in the business to make good suggestions. Our clients were intimately involved in the final aesthetic we achieved.”

The company brightened the color of the stucco to make the house more welcoming and removed old shutters. Eliminating an existing, cracked concrete walkway enabled the creation of new curved walkway with steps up to the front door. Dovetail Group installed new exterior lighting and manicured several overgrown trees and plants on the property as well.

“We also did a small shed [to serve as] her potting shed and a storage shed for him,” Scholl adds. “They specifically didn’t want to go and buy an Amish shed that you brought in on a trailer and just plopped into place because that wouldn’t work with the aesthetic we did on the house. We designed and built a shed to complement the new look of the home.”

Dovetail even ran underground wiring and water lines to service the new lighting and frost-proof hydrants in the gardens. A new, insulated fiberglass and steel basement door with a double-paned insulated glass window unit now accompanies an attractive and working wall sconce. The well-proportioned and positioned lamppost at the head of the driveway lights the way to the residence.

“We like to be involved in these unique types of projects, and the design aesthetic of this house is certainly [unique],” Scholl says. “I think we did as well as we did because we like taking on challenges and figuring out how to solve problems. Some people just want to do the same thing every day, and that’s fine. But we like the creativity of doing this kind of project, to be honest.”

The clients each have children, but none of them live at the house, so the couple was able to be flexible and live in the home during the three-month-plus project, Scholl notes. “Even when we were working in a bedroom or something like that, they just moved into another room, so it was manageable. They were quite amenable to us being there. The biggest imposition is a kitchen job.”

In fact, Dovetail has received more work as a result of the project photographs being posted on the company’s website and its social media accounts, he adds. “Our own website, at this point, is very well-constructed, and we present our projects there quite nicely. Of course, we also have an Instagram and Facebook and all those kinds of things. And then also word of mouth helped too.” QR