The incorporation of fans can further the comfort and enjoyment of outdoor spaces throughout the warmer months.

This outdoor space by Holloway Company incorporates a ceiling fan, outdoor TV and lighting. The company has a retail division, Outdoor Living Wholesale, plus an outdoor design center and indoor showroom.

There are many factors to consider when planning an outdoor living space: how the space will be used, will entertaining be a big factor, how much shade and/or sunshine is desired, and will the space be used year-round are just a few examples. More and more, the trend has been for indoor features to move to the outdoors, resulting in the shift of some indoor activities to these outdoor areas.

And while much has been written about how to utilize these more expansive spaces in and/or through cooler temperatures—including this magazine’s coverage of fireplaces and fire pits in the June 2019 issue—how about making outdoor spaces more usable and comfortable in the summer months?

Ted Tidmore, owner of Holloway Company, based in Dulles, Virginia, notes that a client’s yard space can drive some initial conversations about creating sunny spots versus shade spots in an outdoor plan. “Most jobs we’re designing to allow some shade areas and some sun areas because, certainly where we are, it’s extremely seasonal. The sun in the winter feels great, but in the summer it’s a bit hot,” he says.

“If we have a southern exposed backyard that’s getting beamed sun all day long, we are going to look at where we’re placing a pavilion and where are you going to get most of that shade. There’s definitely a thought given to the sun and how people want to use the backyard.” 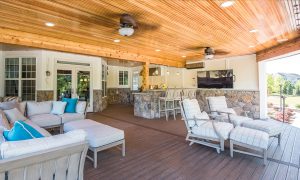 Roof cover—whether a pavilion, pool house or under-deck area—is a top request by Tidmore’s clients because it can extend the time outside. Photo: Designed & built by Holloway Co

Another consideration, part and parcel of the yard space, for an outdoor program is whether the area will be attached or detached to the home. As Tidmore notes, the farther away from the house a pool house or pavilion is, for example, the more “self-sufficient” the clients will likely want it to be, because they won’t want to make the walk back into the house.

“Those amenities are really going to give you that edge to want to spend the whole day or evening out there, because if you don’t have much to do out there, unless the weather is perfect, you’re going to go inside,” he explains. “But if you have the TV on out back and the game is on, if you have the ceiling fan blowing on you, you’ve got some music, it’s definitely going to extend that usability and return on investment even more.”

Dan Bawden, CAPS, CGP, CGR, GMB, president of Legal Eagle Contractors Co., based in Bellaire, Texas, likes the pairing of ceiling fans with skylights to deliver coolness with a brightness. “It sounds counterintuitive to put a skylight in which people immediately think a) it’s going to leak [and] b) it’s going to bring in a bunch of heat. If you put in these really good quality ones that are made by Velux, they are glass roof windows, they are really strong, and they don’t leak. I’ve been putting them in for years,” he says. 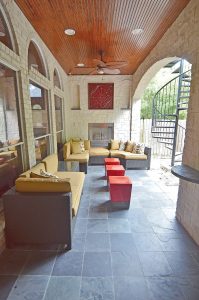 “What my clients need to learn is that when you do a patio cover, you are removing a lot of natural light that used to come in through the windows on those rooms where you’re attaching the patio cover. I have to twist their arm sometimes to do it, but they’re always glad when it’s done. Despite the fact that it may bring in a little bit of heat—the heat gain is very minimal—it’s so important for the enjoyment of the space to have the light coming through naturally.”

A pairing that is intuitive is an outdoor lighting program and ceiling fans, both of which can extend the usage and enjoyment of spaces. “Just about all our jobs will end up getting a lighting package that incorporates ceiling fans, speakers, lights [and] different items,” Tidmore says. “Any job that has an undercover area or living space is all going to have ceiling fans, lights and an outdoor sound system. Most people in this area know they’re going to want some kind of breeze and lighting.”

Bawden echoes clients’ demand for ceiling fans in his area. “I never do an outdoor space without at least one fan, and it does two things: It makes it comfortable to sit out there even on a hot day, but it also literally does keep the mosquitoes away from you as well,” he explains.

“Where we put the fans and how many fans we do is determined by how we’re doing the lighting. Because if I’m doing recessed lights and I put two fans in not that big of a patio cover, you’ll get a lot of strobing, which is annoying. So we have to have either a larger structure, larger ceiling or else we’ll just use one fan. But there’s always at least one fan, and my clients tell me that because of that fan they can use [the outdoor space] more than twice as much each year.”

Both Bawden and Tidmore say that not all fans are created equal when it comes to outdoor options. A client of Bawden’s recently experienced this when he sought fans that would allow him to comfortably sit on his uncovered deck to smoke a cigar and drink scotch.

“We devised this scheme to put oscillating fans because there’s no place to hang a ceiling fan. Each one controlled individually so [the client] could get just the right amount of tornadic activity around him as he sat there. Although we did a lot of research on this, he actually bought several fans that we tried out first to see if they produced enough air motion to do the trick,” he says. “He loved it so much that we ended up building it on the front of his house, because there’s a little front porch he hangs out on too that he wanted to have a similar vortex.” 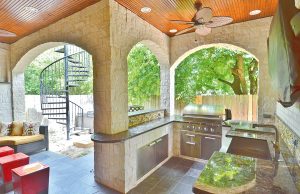 Oscillating fans have become popular in his area, Bawden notes, partially because they can be mounted in a range of spots and they seem more impervious to the area’s climate. That said, he recommends Big Ass Fans and Minka as preferred fan brands or visiting a place like Ferguson to research and learn options. Tidmore also notes Big Ass Fans as a good brand, adding, “We typically recommend the clients go shop a local lighting [and] electric store.”

Tidmore says the ultimate placement of a ceiling fan within an outdoor project determines which rating to select. “When you’re talking about fans, you have wet-location fans and you have damp- location fans. A damp-location fan would be in a porch under a roof. It’s more the humidity that it needs to be designed to take, where a wet- location fan is when it’s actually being rained on [so] you would put that on a pergola or something that’s not totally dry,” he says.

“If you designed the under-deck area to be dry—putting in something like Trex RainEscape or a bladder system—then you could do the damp location. If you’re not doing that and water is passing through, you would have to do wet location.” 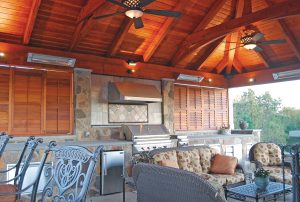 Because of the area’s seasonality, Tidmore notes that his projects often incorporate ceiling fans and radiant heat fans to extend the usability. Photo: Designed & built by Holloway Co

Beyond the challenges of finding the right fan for the right space to fit a client’s needs, there’s the challenge of thinking through the big picture of an outdoor space, according to Tidmore—especially if a project may occur in phases. And something like a ceiling fan may seem like a simple retrofit add-on for a space, but that isn’t always the case. “When we’re talking with the client, we really push and encourage the design of what they ultimately want someday,” he says.

“I get asked all the time: ‘We’re in the market for a deck and that’s it.’ OK, but are there other features? Do you want a pool someday [or] do you want this? ‘Well, we might; we just moved in.’ Really think through what you might want because I want to design this so that you could actually add it with ease. Otherwise I get called into backyards where someone did their phase one or two, and now their phase three doesn’t work so we’re ripping everything out. That’s money wasted, and nobody wants to waste money.

“A little bit of lighting or sound system could be easy [to add], but if you close everything up and pour concrete or finish ceilings and there’s no ability to pull a wire where you want it, then you’re ripping things apart in order to do it,” Tidmore adds. “Certainly having the foresight of what someone might want, and offering it as a suggestion, is part of what we do.” QR