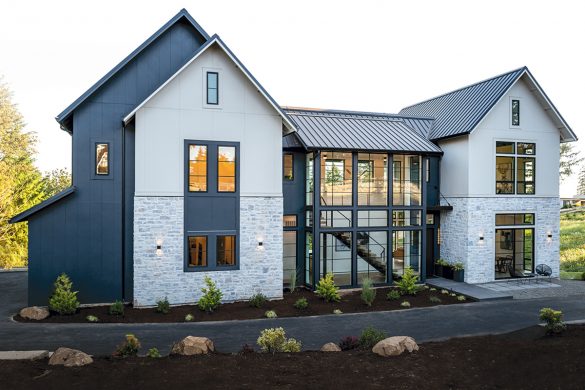 Short of an addition or replacing a roof, changing siding is one of the most comprehensive ways to increase curb appeal and freshen up the appearance of a house. Contractors are finding that homeowners are willing to try out bold new colors or mix-and-match materials in order to obtain a unique look for their homes.

“With higher interest rates, people are more willing to stay in their homes instead of upgrading and buying a new home. That fuels some additional remodeling,” says Shawn Hardy, executive vice president and general manager of products and marketing for Alside.

Darker colors continue to dominate the field with homeowners choosing colors such as Tando’s Mariner Blue and going so far as to pick out options as dark as Alside Ascend’s Cast Iron.

Steve Booz, vice president of marketing for Westlake Royal Building Products confirms, “Dark colors certainly remain on trend. A high part of what we’re seeing is a lot of people using dark colors as an accent trim or even within the siding itself. We’re seeing a lot of customers migrate from the lighter sidings to the darker sidings. In fact, over the last couple of years, our mix of dark sidings has grown 20 percent faster than the traditional lighter colors.” Popular dark colors offered by Westlake include Carbon and Ironstone. “We’re seeing it in our Versetta stone line as well, not just in our vinyl siding. Northern Ash is near black and dark gray, giving people that bold look.”

“What we’re seeing is the desire for black trim,” says Marc Setty, director of marketing in the remodeling segment for James Hardie. “We’re actually rolling out black trim here in August (2022) right now to several markets in the Northeast. We’re going to be offering midnight black trim. And I can’t keep any samples on the shelf of that product; the market is very, very excited to be able to get Hardie trim in black.”

“I always think that trends get set in the new construction side,” Hardy says. “That trickles down to the remodeling side, and someone instead of wanting to buy a totally new house, says, ‘Well, how can I make my house look like a new development?’” In addition to darker colors, grays and blues have been very popular.”

More recently, however, Hardy says they’re starting to see a resurgence in warmer tones such as browns and tans. “It’s cyclical like anything else,” he says. “Once every house you drive by is gray and blue, then people start to try to make their properties stand out and look a little different.”

As homeowners look for new and inventive ways to distinguish their homes from their neighbors, they’re finding one or two types of siding aren’t enough. “Mixed material design is a big one and a shift to more modern and contemporary home styles,” Setty says. “You’ve got those modern contemporary home styles and a desire for mixed materials and textures, and that can be a challenge in the production process. If you’ve got a lot of different manufacturers and material types, they don’t always come together in the easiest of ways to get a design built.”

Mixing horizontal siding with stone or shake is nothing new, but Booz says they’re starting to see homeowners choosing three or four materials on a given home to break up the look and give them something that sets their house apart. “Ten years ago, you might have gotten some shake on a gable or something, but these days people are a lot more willing to make an accent wall with board and batten, or use stone as an accent wall, or even stone on the whole front entrance.”

Composite siding, such as Alside’s Ascend product line, continues to be in high demand. Consumers want a wood-look product that will last a long time without needing maintenance or constant upkeep. “Composite continues to gain traction [compared to other non-wood substitutes] because they really overcome the trade-offs,” Hardy says. Alternatives can be heavy and difficult to install and, if not installed correctly, can absorb moisture, he adds.

“We’re continuing to see vertical siding in demand and continue to grow,” Hardy says. “I think if you go back three, four, five years ago, it was the farmhouse look that was driving a lot of that. But we’re seeing the vertical siding move even outside of the farmhouse becoming more popular, again, because it looks different.”

Booz agrees: “It’s not necessarily about trying to make a statement but about not being cookie-cutter with the people down the street. So, they want to do something that stands out a little bit, and today’s materials allow for that.”

“For this innovation, it was about non-wood looks to begin with. James Hardie is very traditional in terms of your shingles and your board and battens, your trim,” Setty says. “[The Architectural Collection] was our step into non-wood look design on the exterior of homes that you would’ve traditionally had to use other building materials to achieve that look. So, in this particular case, that sort of stucco look you can get with fiber cement panels drives a lot of efficiency in how that actually fits onto the wall—not needing multiple wet trades and cure times and all those things to achieve that type of look.”

Choices on the Up and Up

In the past year, many companies have had to cut back on the number of options they offer, limiting colors or designs to consolidate their stock and focus on their most popular items. This is due to supply chain issues as well as labor shortages in other parts of the market.

“We did [reduce SKUs] in the second half of last year, and we started introducing some suspended items back really in the first quarter of this year,” Hardy explains. “And for the most part, we are now back, wide-open again: no color restrictions restored, most of the SKUs.” He says Alside had to look at its most popular products and make the tough decision to not bring back certain products but, for the most part, things are back to normal. “And that’s not just us. I would say that most cladding options are pretty much now unrestricted.”

Booz agrees, pointing out that supply chain issues have largely resolved themselves. “More recently, and certainly going forward, there’s not any supply chain issues holding anybody back and forcing them one way or another [in terms of which product or material to use]; but when you look at trying to take a couple of dollars out of a job here or there, it could be going to a board and batten that’s a little less expensive than a shake product.”

“Something that’ll be interesting to watch is if, with higher interest rates and potentially housing demand slowing a bit, what choices buildings are going to make such as their product selections and how that might translate and set new trends on the remodeling side,” Hardy says. “It’ll be interesting to see how this plays out because some of those materials have a higher price point. From an affordability standpoint, we’ll be monitoring what they’re doing and what choices they’re making as that kind of plays itself out here over the next who knows how long.”

Over the last decade and a half, labor shortages have plagued the industry, causing a nationwide loss of skilled tradesmen. Manufacturers and builders alike have had to adapt to these losses and shortages, making their products easier to install with smaller crews and less skilled labor.

“One of the trends we’re trying to address is on the installation and labor side of things: the skill level, the turnover,” Hardy says. “I’d like us to make some strides on the training front, but we’re trying to think about the higher inherent turnover that’s going to be in the labor force. That’s where we go back to the composite cladding—you can get that high-end look without the need to have a perfect installation. It’s a much more forgiving install, and you can train someone on it much faster and feel comfortable from a remodeler standpoint that, ‘Yeah, I’m okay to send this person out on the job because this product is designed in a way that they can’t screw it up.’”

In the case of the Ascend products, the cladding is 75 percent lighter than comparable products, so it requires fewer people to handle it around the jobsite. Additionally, it has what is called a “stack lock” that is self-aligning, in which after one piece is put down, the rest locks into place through gravity. There’s also no caulking required. “We are trying to think about all of those things, and that the skill level in general is never going to be as high as it was, so how do we make our product go together, and go on the wall in a way that’s more friendly to the installers of today?” Hardy says.

“When you’ve got a lack of skilled labor, another key trend in the marketplace is, and has been for some time, the more you can simplify achieving the design that you want to achieve when it can be brought you by a manufacturer or maybe a couple of manufacturers,” Setty explains.

“Those products are going to come together easily. They can be designed on the wall, and then you can actually get that product for the homeowner or the builder in an efficient way is really important. There are some advantages to installing with panels from a speed and efficiency perspective. They can all be cut to size on the jobsite depending upon the design you’re going after. They can also be installed vertically or horizontally, which gives you different looks within the same panel.”

For Westlake’s Versetta line, Booz explains that the purpose of the line is to eliminate the need for a mason on hand to install. “To be able to screw the product on the wall without any masonry joints, and with some great accessories that make it easy to install, has really caught on a lot and continues to be a high-growth product for us.” QR

Product Trends: Finance Is Your Friend

Product Trends: Opportunity of a Lifetime

Roofing Trends: Above & Beyond

Product Trends: Eyes of the Home