Ryan Hughes Design Build captures the duality of family enjoyment and sophisticated, adult fun with one of its most successful projects. 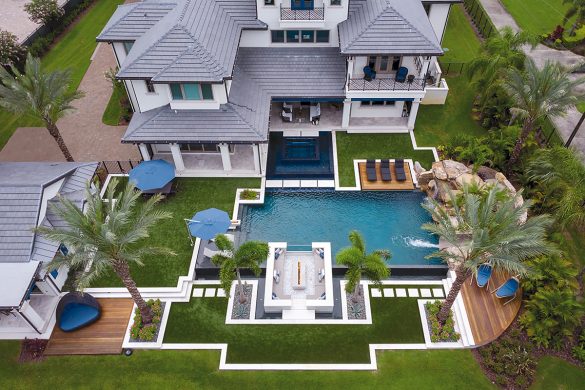 A young family who called this coastal house home desired a state-of-the-art swimming pool and a functional outdoor living space. They sought a sense of fun and adventure while maintaining a level of sophistication. The mother wanted an organic natural rock structure with a swim-in grotto, and the father’s goals included a huge spa, a sunken fire pit and clean, modern lines. Between the two seemingly competing ideals, their children just needed a place where they could go have fun.

Upon learning about the family’s diverse preferences, the designer realized the project called for something that was an even split between family entertainment and upscale adult fun while also reconciling a modern style with a naturalistic atmosphere. The challenge, therefore, became how to seamlessly merge the two concepts within the same space. Now known as Keystone Falls, the outdoor living area incorporates a grotto for mom, a spa for dad, and a 30-foot slide for the kids.

The design started with the father’s vision of a modern, clean-lined pool. As with all its projects, Ryan Hughes immediately established a strong center line. In this case, it begins at the door to the house.

Ryan Hughes made the grotto and slide area its own dedicated space, far removed from the sight line that looks out of the back of the house. The experience of “discovering” this secluded retreat gives it the intended organic, naturalistic atmosphere.

The boundary between a modern, geometric pool and a rocky grotto could have been awkward. Ryan Hughes, however, softened the transition by using Brazilian walnut, a natural-looking hardwood also known as ipe.

Instead of a traditional pool deck of marble or travertine, the entire deck is artificial turf to help harmonize the two worlds. Otherwise, the grotto would have contrasted with its surroundings and clashed with the color and texture palette.

The center line extends directly across the pool to a floating fire pit set inside the pool. To enter, you must walk around the pool and step down into it. The moat gives people the impression that they are seated completely within the water.

Utilizing a change in elevation, an acrylic window and a vanishing edge make the fire pit feel like a continuous extension of the pool. The partitioned space spans the trough of the vanishing edge, meaning that half of it is in the upper pool and half is in the lower pool. QR