Remodeling is expected to grow next year, but the rate will be slower due to shifts in the underlying demographics and behavior of U.S. households.

Normally a combination of the following factors would translate into strong or even exponential remodeling growth: high consumer confidence, high home prices and equity, very low mortgage rates, growing incomes and a bullish stock market. In the fall of 2019, all of these positive factors exist; however, the year ahead will only see tepid growth of under 1 percent nationally, according to experts at Harvard University’s Joint Center for Housing Studies and John Burns Real Estate Consulting. But any growth is good growth, particularly coming after a decade of above-average annual gains in remodeling activity.

“The market historically has grown by about 4 or 5 percent per year,” says Kermit Baker, a senior fellow at Harvard University’s Joint Center for Housing Studies. “We’ve had eight of the last nine years where it’s either been at that level or above it. And most of those years, a couple of points above it, generally 6, 7 and 8 percent. So saying that remodeling will maintain its level in 2020 is a pretty optimistic assessment of market conditions.” 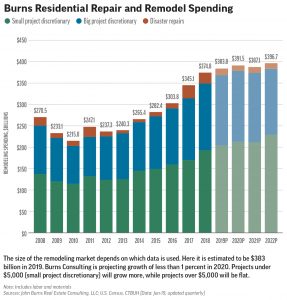 The reason for less robust growth is due to new and unique headwinds. First, homeowners are staying put. The rate at which Americans move, the mobility rate, is now half of what it was in the early ’90s. This is a transformational shift at the root of new product and project choices homeowners are making as they stay in their homes longer.

A second headwind involves prices for luxury homes. While prices of all housing types is higher on average, luxury prices are sliding fast due to a number of factors including changing demographics, which have contributed to new aspirations among home buyers, says John Burns, whose 2016 book, Big Shifts Ahead, studied home buying by different age groups. 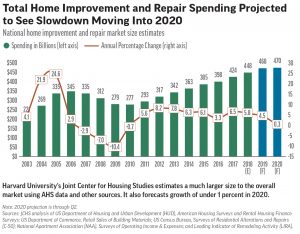 “I think aspirations have changed. It’s just not that important to keep moving up into a nicer, bigger home all the time like it was for the baby boomers,” Burns says. “It’s also expensive. It probably costs you 7 to 8 percent of the home price every time you move, so people are staying put. People forget that baby boomers are really unique. They do a lot of things very differently. And we’re kind of going back to the way it used to be.”

Aspirational differences are also at the heart of the price declines for luxury homes in suburbia for executive buyers. Yes, a big hit to the luxury category came when the 2017 tax law capped the mortgage-interest deduction for jumbo mortgages over $750,000, along with a new cap of the deduction for state and local taxes at $10,000. But the larger impact is from today’s young lawyers, doctors and business executives who are now choosing to live in closer-to-work locations rather than the traditional suburban home on two acres, Burns says. “Some of the previous growth in the luxury market was underpinned by first-time buyers, who were buying $800,000 homes—a 33-year-old tech exec or a Wall Street analyst who needed that tax break to stretch into those homes, so they are renting now. And this is true more in the center of the country; society has shifted towards favoring close to work. And they are thinking that having a big house is not what I want to brag about.” 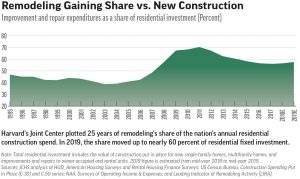 In 2020, metro house prices will vary greatly, data from Burns Consulting suggests. Chicago, New York and three California metros will all experience rapid declines in home prices. Twenty other metros are “maturing,” such as Dallas, Houston, and Nashville, where housing supply is higher. Or it will be affordability problems in places like Seattle and Boston. Lastly, it can be a sudden lack of foreign buyers as it is in Miami, which is also in the “mature” category. Strong markets include Orlando, Tampa, Austin and Phoenix, where prices are still gaining.

“The downturn in 2008 was a completely different animal that hit every market in the country,” Burns notes. “But if you’ve studied history, this is usually the way markets behave.”

For the past two decades, Harvard’s Remodeling Futures Program has utilized Qualified Remodeler’s annual Top 500 remodelers list as a basis to study the health of the industry’s largest contractors. According to Kermit Baker, the group has steadily outperformed the overall market in revenue gains, and that was true again in 2019 with the list that was released in August. But there was, however, a difference. For the first time in several years, the average size of remodeling projects completed by high-end remodelers that are classified as “design-build” and “full-service” declined, even though overall revenues grew for those groups, Baker says. 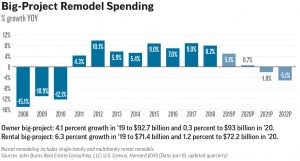 “It broke a string of six, seven or eight years where project size was constantly growing. That’s suggesting that homeowners are a little bit hesitant in the projects they undertake,” Baker adds. “That was not true for replacement contractors (home improvement companies) which have steadily made gains every year.”

Todd Tomalak, who is the lead remodeling market analyst for Burns Consulting, says the noticeable shift toward lower-priced products and projects is noticeable. The company’s analysis, which is based on Census Department data and the biennial American Housing Survey, forecasts a reduction in the volume of kitchen projects as well as a reduction in average project size. 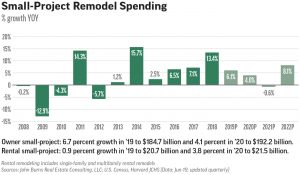 “We spent a lot of time trying to uncover what we believe were the causal factors that really drive people to do more remodels, or to spend more or spend less per remodel,” Tomalak explains. And what that did was they give us a really good visibility to what drives the size of projects, and then also shed further light on some of the individual product segments themselves.”

The company now scores product categories for their vibrancy. The No. 1 category for next year is high-end composite decking at a 9, roofing is a 4.3, siding is a 4.4, windows and doors are over 5, and outdoor living generally is a 7. According to Tomalak, very expensive decking material is benefiting from the very steep drop in mobility and the rising average tenure in a home. 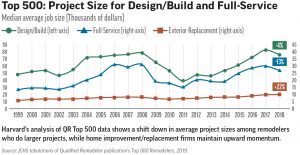 “The whole value proposition of paying extra for a premium composite decking product only makes sense when you’re going to stay in that home for a long time. And so we’re seeing the whole sales pitch on composite decking basically being justified as well as how much you save on maintenance. And that’s why it’s such a good deal.”

Luxury cabinets, on the flip side, are trending lower in this market. As part of their quarterly survey of kitchen and bath dealers on behalf of the NKBA, Burns Consulting is seeing waning confidence among this group over the three most recent surveys. Some of the verbatim feedback says clients are shifting down to lower-price cabinets for many reasons: tariffs on Chinese-made products and the growing willingness on the part of some buyers to shop online. 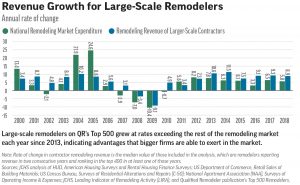 “Luxury consumers also have the ability to shop online. And some of the dealers in our survey point to issues where clients search a certain type of high-end luxury cabinet and see a much lower price item that looks very similar online, and it might even be lower what the dealers themselves are paying. So there’s a little bit of channel conflict that’s going on too that will probably shake out over the next few years due to this mix shift,” Tomalak explains.

The mix shift also extends to project types. Burns is scoring kitchen remodels at a 6 for 2020, but bathrooms are almost an 8. The logic for this change relates almost entirely to the lower mobility rate, longer average ownership tenures and lower price points, according to its analysis. 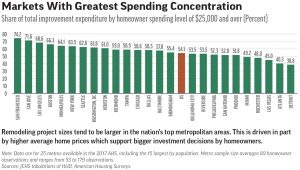 The Era of the Boomer Wanes

Much of what is happening in the remodeling market, as previously stated, relates to changing demographics. Today, the remodeling market is dominated by members of the baby boom generation. Leading-edge boomers are now reaching at 73 and 74, while the youngest boomers are age 55. According to Harvard’s Kermit Baker, this cohort is responsible for 50 percent of all remodeling activity in the U.S. They have been the luxury buyers who have consistently traded up and remodeled their homes in the past 40 years. 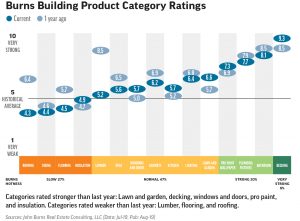 As part of his work studying demographics by decades, John Burns has quantified the effect of younger buyers very specifically. “We are in the midst of a tailwind of younger buyers. First-time buyers born in the 1980 create an 11 percent entry-buyer tailwind versus those born in the 1970s. When it shifts to those born in the 90s, the oldest is now 29 or 30; that’s a 6 percent tailwind. So we’re coming off a period of 11 percent tailwind into a period of 6 period tailwind,” Burns says. 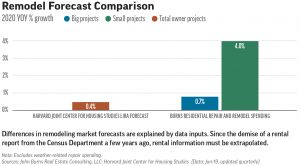 “If you do nothing else and there’s no recovery in prices, no change in the whole macro-economic story, and you just swap in a 35 year old for a 50-year-old homeowner, that new buyer will do over 45 percent more discretionary interior remodels—kitchen and bath and flooring, etc. In addition, they’re over 50 percent more likely to replace systems like furnaces, air conditioners, and the HVAC. They’re much more focused on monthly operating costs and the efficiency of the home,” Tomalak explains.

“From 2013 to 2017, it was all about relatively few projects, but there were really expensive projects, a lot of growth at the lux end. We probably are going to see more growth at the lower, and mid-price point, but a lot more volume.” QR

People Staying in Their Homes 20 Years

People make different decisions on product selections when they know they will be staying in a home longer, says Todd Tomalak with Burns Consulting. A good case-in-point is wood decks versus composite decks. Homeowners will calculate the annual costs of maintaining a wood deck and add it to the lower initial cost. When they do, they find that the lifetime cost of ownership of more costly composite decking is actually cheaper, he explains.

Harvard’s Kermit Baker sees the lower mobility rate as a bit of surprise given the higher number of millennials. Younger cohorts typically rent and move more. He thinks mobility rate might trend back up when there is more housing supply, Baker says. “I wonder if it doesn’t come back to this inventory shortage [that] we’ve been trying to make sense out of for the last decade.” QR