Remodeling Outlook: A Fast Start to 2020

Unexpectedly good numbers from new-home sales in the fourth quarter of 2019 indicates higher demand for residential construction at the beginning of the year.

Residential repair and remodeling spending will have grown 3.3 percent in 2019 to $386.9 billion, which includes a 38 percent decline in disaster repair spending, according to John Burns Real Estate Consulting. That same pace of growth will continue into 2020.Note: Includes labor and materials

As remodeling contractors who operate in very local markets (oftentimes very small submarkets in tiny geographies), you might have trouble assigning importance to national forecasts for remodeling activity. This has always been the case. In Southern California and parts of the Midwest, home prices are not appreciating. That fact alone tends to be more important than how homeowners and home buyers are behaving on a national basis. However, since October, the last time we updated the sentiment of industry watchers, much has changed for the better.

Early last fall, all of the relevant indicators showed that remodeling was strong, but that it was also very late in the economic cycle. Indeed, at that time as many as half of the economists surveyed said it was likely the U.S. economy would slowdown sometime in 2020. Then came unexpected good news from the new-build side of the residential construction industry. 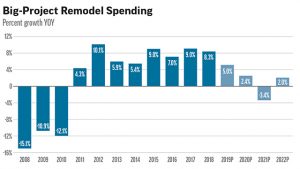 “We do a monthly survey of builders that just looks at their sales pace, which obviously is a front runner to when they pull permits, which in turn front-leads housing starts, and that number is significantly stronger in Q4,” Tomalak notes. “Our October read was up 26 percent. That’s not just off a weak comparison. That’s significantly higher even versus what it was two years before. We’re seeing some price acceleration happening.”

Remodeling industry observers now know that there is a strong correlation between remodeling activity and new-home construction. They tend to move up and down together and are not counter to one another. We understand that strong new-home sales indicate all of the factors that support remodeling are likely strong too.

Last fall we observed that a combination of the following factors directly translates into strong or even exponential remodeling growth: high consumer confidence; high home prices and equity; very low mortgage rates; growing incomes; and a bullish stock market. In the fall of 2019, all of these positive factors existed; however, at that time, it was said that 2020 will see only tepid remodeling growth of less than 1 percent nationally.

This was the opinion of experts at Harvard University’s Joint Center for Housing Studies, as well as John Burns Real Estate Consulting. Since then, the Burns forecast has been revised upward. And it is expected that Harvard’s Leading Indicator of Remodeling Activity (LIRA) may also show upward revisions when it is released later this month. 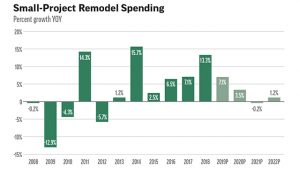 “I think we’re going to see a very exciting start to 2020 even though we have a recession penciled into our forecast longer term, in 2021 and 2022,” Tomalak explains. “So there’s probably some logic that we see a slowdown later in the year. The timing is always hard to forecast, but based on the near-term indicators—boots on the ground that we’re looking at right now—we think we were probably situated for a very, very, very strong first half of 2020.”

For remodelers and home improvement firms, it means that every effort must be made to make sure that their businesses get off to a fast start this year (See “So Goes the First Quarter, So Goes the Rest of the Year,” by Scott Siegal of Maggio Roofing and Certified Contractors Network).

Perhaps partly triggered by the lowering of interest rates by the U.S. Federal Reserve last fall, bond traders’ activity pushed mortgage-interest rates to very low levels at the end of 2019. They are down 120 basis points, or 1.2 percent, from a year ago at this time. This, combined with continued higher home-price appreciation in most parts of the country, along with higher levels of cash-out refinance activity, is translating to a higher level of bigger-project remodeling activity. This is good news on top of what has been a good run for remodeling.

“The remodeling market historically has grown by about 4 or 5 percent per year,” Kermit Baker, a senior fellow at Harvard University’s Joint Center for Housing Studies, told QR last fall. “We’ve had eight of the last nine years where it’s either been at that level or above it. And most of those years, a couple of points above it, generally 6, 7 and 8 percent. So saying that remodeling will maintain its level in 2020 is a pretty optimistic assessment of market conditions.”

A Shift in Projects and Products

Beyond the fast start, Tomalak and Houzz.com economist Nino Sitchinava see similarities to some of the underlying forces shaping the year ahead. Tariffs and duties at the world-trade level have had a significant impact on overall prices for building materials. And both see this inflationary pressure as a key reason why the remodeling market and, in particular, kitchen and bath activity will grow in dollars this year. According to Sitchinava, the increase in dollars comes despite a steady reduction in the scope of projects that homeowners are undertaking. The anticipated smaller scopes-of-work were revealed by consumers via Houzz’s recent survey on renovation trends. 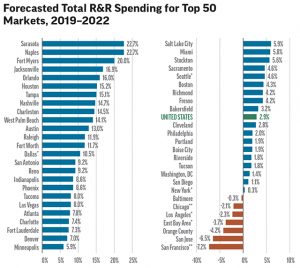 Repair and remodeling spending in northern Florida and the Sunbelt will outpace most top 50 US housing markets through 2022. The greater San Francisco area will contract most among all major markets. Note: Includes owner and rental remodel spending *Metro division **Combination of metro divisions (except Raleigh-Durham, which is combination of metros) Sources: John Burns Real Estate Consulting, LLC (Data: Nov-19, Pub: Nov-19)

“For example, installments of cabinetry, appliances, flooring, faucets and countertops has retracted. So we see the scope of projects is declining because the price of products and materials is increasing. The average price point is higher than it was last year. It’s a really interesting mix-shift that’s taking place in the market today.”

Tomalak sees the same mix-shift taking place. His company’s analysis, which is based on American Housing Survey data, also forecasts a reduction in average project size.

“We spent a lot of time trying to uncover what we believe are the causal factors that really drive people to do more remodels, or to spend more or spend less per remodel,” Tomalak explains. “And what that did was then give us a really good visibility to what drives the size of projects, and then also shed further light on some of the individual product segments themselves.”

The company now scores product categories for their vibrancy on a scale of 1 to 10. According to this analysis, luxury cabinets are trending lower in this market. Higher prices for products have created a growing willingness on the part of some buyers to shop online.

“Luxury consumers also have the ability to shop online. And some of the dealers in our survey point to issues where clients search a certain type of high-end luxury cabinet and see a much lower price item that looks very similar online, and it might even be lower than what the dealers themselves are paying. So there’s a little bit of channel conflict that’s going on that will probably shake out over the next few years due to this mix-shift,” Tomalak explains. 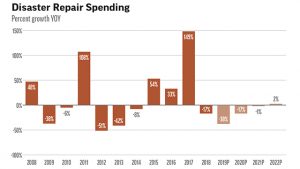 The mix-shift also extends to project types. Burns is scoring kitchen remodels at a 6 out of 10 for 2020, but bathrooms are almost an 8 out 10, where 10 is the strongest demand. The logic for this change relates almost entirely to longer average ownership tenures and lower price points, the company’s analysis says.

Baby boomers, those born between 1946 and 1964, have dominated the remodeling market for three decades. But now, as the oldest boomers turn 73 and are exiting homeownership, in many cases younger generations are picking up the slack. According to Houzz data, about 14 percent of the kitchen and bath and remodeling market is now driven by millennials, those in their late 20s to late 30s. Sitchinava says the company’s consumer data suggests that millennials tend to do more projects in more parts of the home, but the solutions are more cosmetic.

“The homes millennials tend to buy are lot older with a lot of issues: cosmetic issues, structural issues, exterior or interior issues, outdoor and so forth. And what we’re seeing millennials do is they’ll go after many projects, kind of simultaneously, but they’ll do the minimum necessary to sort of maintain the home, which is very different from the way baby boomers renovate,” Sitchinava explains. “Ultimately, what we see is that the spend of the millennial renovating homeowner is significantly lower than that of the baby boomer. We really have not seen a major push coming from millennials, but they do represent roughly 14 percent of the renovating homeowners on Houzz.”

Other market observers see similar demographic effects. According to Harvard’s Baker, the baby boomer cohort is responsible for 50 percent of all remodeling activity in the U.S. today. They have been the luxury buyers who have consistently traded up and remodeled their homes the past 40 years.

Now buyers born in the 1980s and 1990s are increasingly buying homes and boosting the homeownership rate. “The homeownership rate seems to be finally reversing itself and starting to build some momentum, and [it] will continue to see that as baby boomers age,” Baker notes. 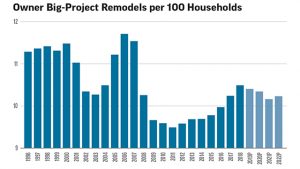 “If you swap in a 35-year-old for a 50-year-old homeowner, that new buyer will do over 45 percent more discretionary interior remodels—kitchen and bath and flooring, etc. In addition, they’re over 50 percent more likely to replace systems like furnaces, air conditioners and the HVAC. They’re much more focused on monthly operating costs and the efficiency of the home,” Tomalak explains.

“From 2013 to 2017, it was all about a relatively few projects, but there were really expensive projects and a lot of growth at the luxury end. We probably are going to see more growth at the lower, and mid-price point, but a lot more volume.”

In summary, the coming year is expected to get off to a fast start, led by pent-up kitchen and bath remodeling activity.

“We continue to see kitchens and bathrooms being the most popular projects among renovating homeowners,” Sitchinava says. “We believe that the kitchen and bath category will remain to be quite healthy going into 2020. The prices of building products related to kitchens and bathrooms are increasing and, as a result, we see homeowners retracting in terms of their scope; but the popularity over the projects really has not declined.”

Remodelers, kitchen and bath designers and home improvement pros should make the most of the first six months of the year, Tomalak notes. “Don’t fumble in Q1 and Q2 because you won’t be able to make it up in Q3 and Q4.” QR