Technology Report: Eyes in the Sky

The market for drones is growing rapidly, especially within the real estate and construction industries. Here is the bird’s-eye view for remodelers.

To the traditional sounds of hammers, drills, table saws and generators, contractors can soon expect to hear the rhythmic thwacking of a drone’s propellers hovering over their jobsites on a regular basis. Though they’re still a novelty, the market for these robotic flying machines is growing quickly, with real estate and construction photography leading the applications. Remodelers are among those finding great use in having a new pair of eyes in the sky.

The market for unmanned aircraft systems (UAS, the official name for drones, which incorporates both the aircraft itself and associated control equipment) has truly taken flight in the last two years, aided by rapidly dropping prices and a newly streamlined U.S. Federal Aviation Administration (FAA) approval system. In the year following the FAA’s December 2015 launch of an online registration system, more than 625,000 hobbyists registered their equipment. Online registration of commercial UAS equipment went live in April 2016, and more than 44,000 owners had registered equipment by the end of that year. 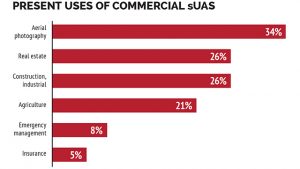 This rapid uptick is expected to continue for at least the next several years, according to the FAA’s “Aerospace Forecast 2017–2037.” By the end of 2021, the agency anticipates up to 4.47 million hobbyist and 1.6 million commercial UAS could be flying in the U.S. And building pros should note, FAA figures show construction and real estate-related applications, combined, lead the list of reasons small UAS (sUAS) are now in the air. [Find the full FAA “Aerospace Forecast 2017-2037” by visiting: faa.gov/data_research/aviation/aerospace_forecasts/media/FY2017-37_FAA_Aerospace_Forecast.pdf, p. 33]

Qualified Remodeler recently spoke with three remodelers who are all enthusiastic about the advantages drones can provide in the field. Both Stephen Gidley, owner of Fairfield, Connecticut-based GidleyRemodeling.com, and Michael Anschel, principal of Minneapolis-based OA Design + Build, have become operators on their own, while Michael Menn, principal of Michael Menn, Ltd., in suburban Chicago, outsources his drone work. But each sees growing value in the technology for remodelers—in marketing as well as in day-to-day field operations.

For Gidley, drone photography and videos have become a new way for his high-end projects to stand out in an increasingly competitive market. Gidley will be celebrating 50 years in the remodeling industry this year—having first hung out his shingle in May 1968—and investing in high-end marketing efforts that match his clients’ high-end budgets has been a key element in his continued success. Fairfield County, Connecticut, is home to some of the nation’s wealthiest communities, including Westport and Greenwich, and homeowners there have become used to glossy promotional materials that would be at home in the pages of a high-end architectural magazine.

Recognizing the importance of images, Gidley began investing in aerial photography of his completed projects about 25 years ago. “We began to publish those in local high-end magazines—we’d run a full-page ad, and our name became known,” Gidley says. “It kept us in the forefront.” Though he backed off that approach during the recession’s lean years, he says his new drone is giving him a chance to put dramatic photography back into his marketing plans. The views from above, he says, just tell a better story than traditional ground-level shots of an entry façade.

“You can get so much more of the job,” he notes. “You’re getting the whole house, the whole site. We feel it’s very important to incorporate the aerial photo. You take one picture from the front and one from the sky, and that tells the whole story.”

His initial step was to call in an expert. “I started by using a couple guys who worked for real estate brokers,” Gidley says. But in watching them work, he quickly saw an opportunity to bring future projects in-house.  “I decided, rather than call these guys and pay them $250 a pop, I can do it myself.”

Beyond the $1,100 he spent on his Phantom 4 unit from DJI (reduced from $1,600 during a BestBuy Christmas sale), Gidley also invested time in working with a coach and in fees to take the test to become a licensed UAS pilot. His suggestion for remodelers who might be thinking of exploring the technology is, first, take the time to see how drone photography works in action. 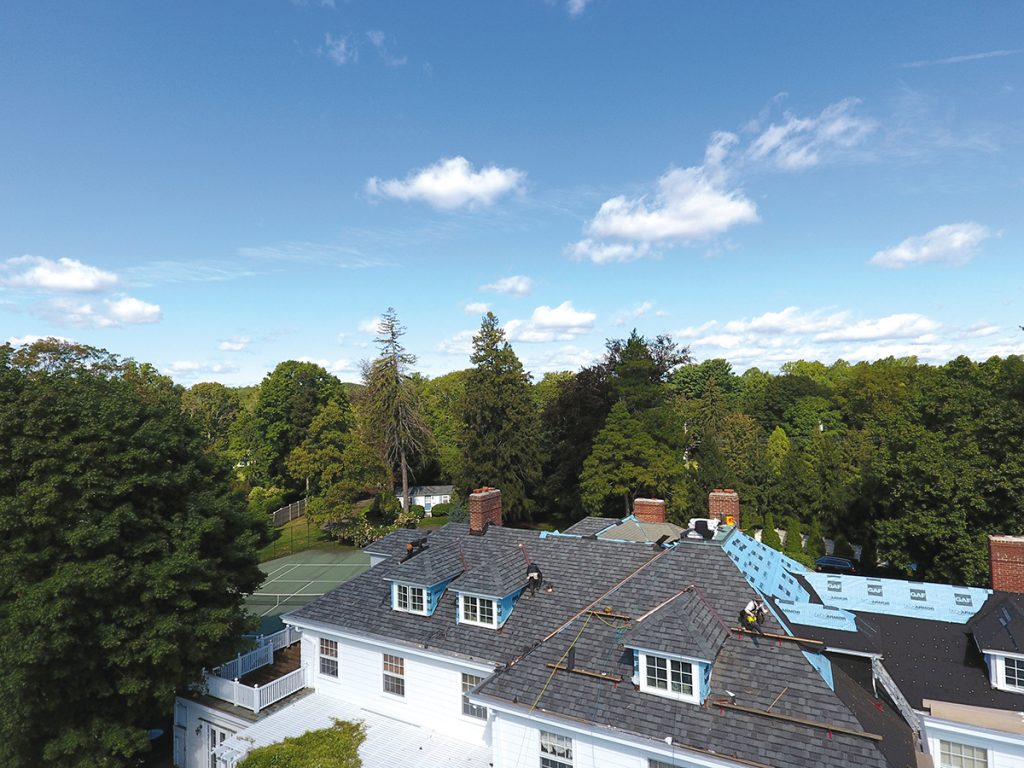 “Contact someone who’s already doing it, and have them photograph one of your projects—you want to make sure this is a fit,” he says. That expert also could be a resource for equipment recommendations. In Gidley’s opinion, both obstacle avoidance and a 4-millimeter camera are must-have features.

The time and cash investment have both been worthwhile, Gidley says. With the growth of both social media and hand-held communications, he says remodelers need to reconsider marketing efforts based on old-school printed flyers and advertisements. His drone-based photos now make a regular appearance on his Facebook and Twitter feeds, which he says is part of a larger strategy to reach potential customers in a way that’s both relevant and immediate to their everyday experience.

“We do between 20 and 30 projects concurrently, and in order to keep that volume you have to make yourself attractive to the public,” he says. “Today, it’s anything that will get on the iPad or the iPhone. We wanted to be the kind of company that just comes to mind.”

Put Your Ladder Away

For Michael Anschel, buying a drone was more a decision to explore an interesting new technology than a carefully explored business strategy. But he’s still glad he made the move.

“There were some fun videos, the technology had gone from ungodly expensive to accessible, and we had a project that just seemed like a good fit,” he says. “We’re always looking for ways to communicate the process.” 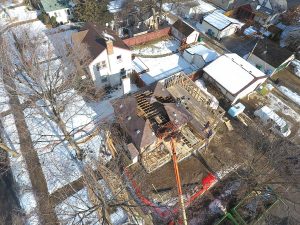 The project in question, in late 2016, was a showcase effort with sponsor participation that was being completed on a high-pressure schedule. “Having a showcase project, having sponsors and knowing we needed to highlight the project—the most appropriate tool to my mind was, ‘Let’s get a drone in there and take some footage.’”

The resulting photography helped build interest for the project online, Anschel says. “In terms of capturing the process of what was happening week-to-week, it generated attention and excitement around the project.”

The house, which Anschel’s firm purchased and remodeled to show off its credentials as a green-design leader, went on the market soon after completion. At that point, the listing broker brought in their own photographer, who put together a more slickly produced video.

“I think that’s a great use of a vendor when you need to have something look more professional and tell a story in a short amount of time,” he says.

In the last year or so that he’s had his drone, Anschel learned the airborne robot also can be a very practical addition to a remodeler’s set of tools. He now regularly sends the device up to serve as another pair of eyes anywhere he might otherwise need a ladder for access.

“You can use it to look for defects—you can pull it up higher than any of the carpenters,” he explains. “We’ve also used it for some forensic work for clients who were having some water intrusion issues. The client really enjoyed the process of being able to be on the ground and see it on the monitor.” 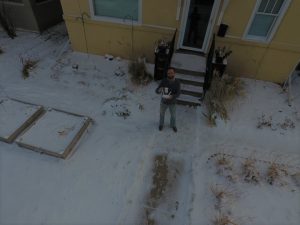 Like Gidley, Anschel is a fan of DJI’s Phantom 4 model, and he is largely self-taught on its operation; though he did reach out to a local professional for some additional training. He recommends that kind of coaching for others new to the nuances of drone operation, because, as he says, “crashing them sucks.”

Even with drones getting cheaper—and drone-shot videos becoming popular Facebook and YouTube entertainment—remodelers in his territory have been very slow to pick up the technology, Anschel says, which surprises him. While there is a bit of a learning curve, UAS equipment offers too many advantages for remodelers to ignore.

“I don’t know what the stumbling block is; it’s kind of a no-brainer,” he says. “Make it a point to take it out to your jobsite, and if you have to get a ladder, that should be your cue to get the drone out.”

Outsourcing to the Pros

For Michael Menn, taking on drone photography himself would be adding one more chore to an already full to-do list. He sees a lot of value in the promotional and field operations benefits drones can bring to a remodeler’s business, but he’d rather turn to an outside professional to do the actual work.

“I enjoy outsourcing stuff like that,” he says. “There are pros and cons to decisions like this.”

His interest in the technology was first piqued when he saw drone-shot videos start to show up in online real estate listings. “I was thinking this is good; we can use it,” he says. Then, like Anschel, he was finishing up a large project that seemed a perfect fit for an exterior flyover. After that initial effort, a similarly successful shoot several months later sealed his interest and has him looking for new ways to use the technology to build interest in his business.

“Now we’re going to do before-and-after drone videos,” he says. Getting a bird’s-eye view of exterior conditions will aid his designers, he notes, and Menn believes the finished video will gain attention on social media.

“We want to show how you can transform a house,” he says. “People do that from the interior, and we want to do it of the exterior.” 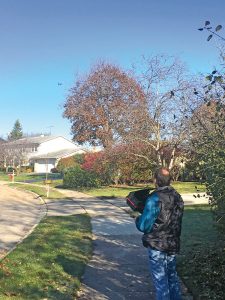 While someone else might have their hands on the controls for Menn’s drone-based productions, he remains very hands-on during the process. In the first two videos, he worked closely with the outside photographer to ensure the finished product lived up to his expectations.

“We walked around the property multiple times to ascertain the views we wanted, where the hindrances might be, and where the drone would take off and land,” he says. “And then, like with still photos, we took some shots and took a look at them. Then, we had to figure out how we were going to blend the sequences. There’s a lot of set-up and prep time, and a lot on the backside, too.”

Menn says the response on social media—his several videos have accumulated hundreds of views on Facebook, alone—has made this work worth the time and expense. And, like Anschel, he sees value in a drone investment beyond their use as a tool for publicity.

“I tend to use it just for marketing but I also understand the other side, where you’re using it as another set of eyes,” he says. “Instead of crawling up on a ladder, you can do a flyover and check the framing, the sheathing and the shingles, and make sure all the roof penetrations have been done correctly.”

This is exactly how Menn’s roofing contractor now uses a drone—as a remote pair of eyes during the bidding process. “Now if he’s going to replace a roof, instead of sending up someone on a ladder, he’ll use a drone.” |QR 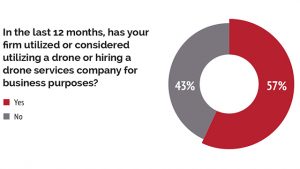 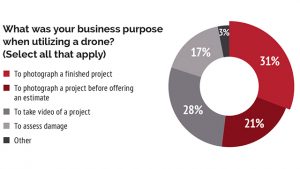 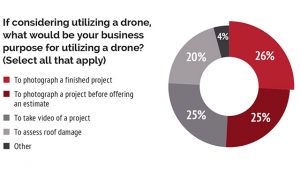 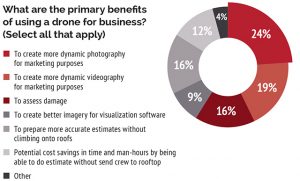