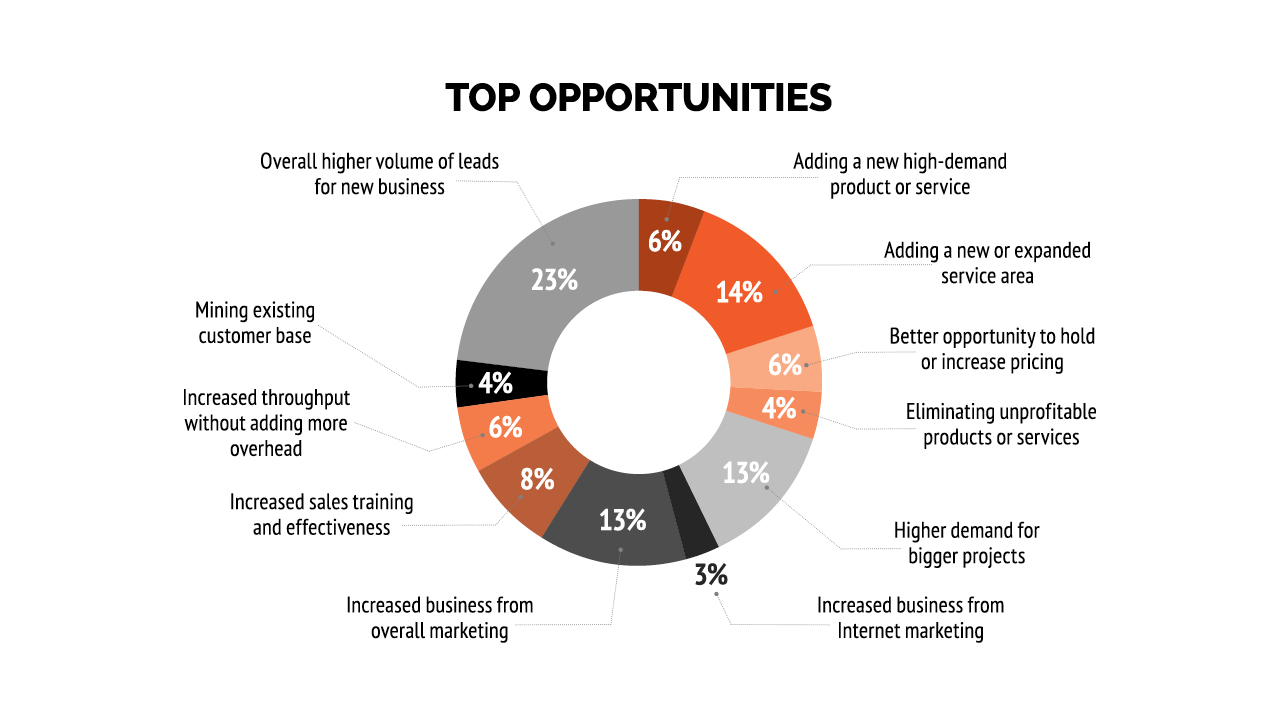 The growth of Universal Windows Direct, No. 17 on this year’s list of top companies, is analogous to the broader industry. Good times or bad, home improvement pros make it happen. The same can be said of Universal; they aggressively market and sell their way to success.

Bill Barr and Mike Strmac founded the company in Cleveland after learning the business at the ground level during college at Ohio State University — by knocking on doors and scheduling sales calls. Now in their early 40s, the two co-founders have created a company that at $42.3 million in revenue is growing at 25 percent annually by sticking with what they know: canvassing and home shows. Their true gift is for recruiting other competitive, like-minded individuals who perform well in the field and who stay with the company for continued growth.

The firm — which primarily sells windows, 65 percent; siding, 15 percent; doors, 10 percent; and sunrooms, 5 percent — lists its biggest opportunity this year as increasing its efficiencies in sales training. In short, they have created a high-energy culture that thrives on personal and collective success.

Having risen so far, so quickly, what is their next goal for company success? Look out FirstEnergy Corp., they aim to be big enough to acquire the naming rights of FirstEnergy Stadium, the home of the NFL’s
Cleveland Browns.

The aggressive, marketing- and sales-driven mindset of Universal Windows Direct is also present in the vast majority of the companies on the 2015 Home Improvement Pro 200 (HIP 200). They are on a roll and they will continue that roll through 2016 and beyond.

This year, the HIP 200 pulled in a combined $3.86 billion in sales on 7.6 million jobs. Revenue was up 15.9 percent from the prior year. Jobs were up 22 percent. The American economy grew and a broad-based economic recovery lifted the market to new highs. More gains are expected in 2016. Barr and Strmac project gains of between 21 and 25 percent for their company.

What’s working, and what’s not

For Universal Windows Direct, home shows are key. The company, whose roots are in canvassing, drove 65 percent of its leads for new business last year from home shows. Across all HIP 200 firms, home shows led to only 11.1 percent of revenue, the No. 4 revenue generator. Nos. 1 and 2 were “repeat business” at 16.7 percent, and “referrals” at 12.3 percent. “Internet marketing” came in No. 3, netting 12.1 percent of revenue. (See chart at right.)

While QR cannot release individual costs per lead averages, the aggregate across all companies on the list was $361.28. Most effective lead generation sources varied from company to company. A chart at right ranks the effectiveness of 14 lead sources on a scale of 1 to 5, with 5 being “most effective.” The results correspond closely with the lead/revenue correlation. No.1 with an average score of 4.39 was referrals, followed by No. 2 repeat business at 4.35 out of 5; and No. 3 was Internet marketing with an effectiveness rating of 3.54 out of 5.

HIP 200 companies have lists of challenges and opportunities indicative of strong growth ahead. The No. 1 challenge for nearly half of the companies was finding and retaining qualified employees and trade contractors. The biggest opportunities include: increased business from Internet marketing, adding a new product or service offering, expanding geographical service areas, an expected higher volume of leads, increased demand for bigger jobs, and an ability to hold or increase pricing.

Although not all the companies on the HIP 200 can conceivably aim to one day own the naming rights to an NFL stadium, all can claim a share of the market gains that are out there to be had in 2016. QR