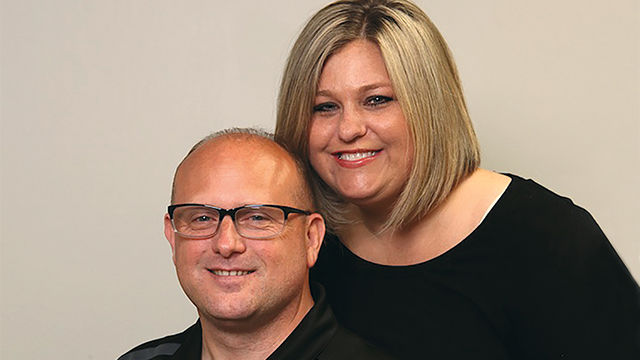 When Rob Booher opened his own remodeling company, Booher Remodeling Company, with the support of his wife, Kathi, in 2001, he was the only official employee and was doing a little bit of everything out of his home-based office to keep the business open. Fast forward the subsequent 17 years and the company has since opened a showroom, added its 20th employee earlier this year and appeared on our annual Top 500 list seven times, starting in 2012.

Booher Remodeling Company has achieved many milestones thus far along the way. Rob Booher notes the company had four employees and became incorporated in 2004; his wife officially quit her job and joined the company full-time in 2011, taking over administrative duties; and around 2013 or 2014, transitioning from a full-service remodeling company to a kitchen-and-bath-focused remodeling company.

“We used to do basements, decks [or] whatever the client needed,” Booher explains of the decision to transition the company’s focus. “What we noticed is that we really excel in kitchen and bathroom remodeling. Our cycle times are great, our customer satisfaction is great, [so] it just seemed to be a good fit for us.”

A view of one portion of the Booher Remodeling Company showroom.

The company’s 2017 installed project breakdown shows 48 percent of its projects were bath/bath additions, 29 percent kitchen/kitchen additions, and 23 percent room additions. “The trend has always been we did more bathrooms, because when we go into a lot of our client’s homes, we may go in there and remodel their kitchen but then the next year they’re calling us back to do bathrooms. What happens is there might be two bathrooms, where we only did one kitchen,” Booher says. “We have a client right now, for instance, where we’ve started on the bathrooms—we’re on our fourth bathroom in this home—and as soon as we get wrapped up then we’re moving into the kitchen. Our company is based on building long-term relationships with our clients, so when they need a contractor we want to be the one they call.”

Another facet of Booher Remodeling Company’s evolution into a kitchen and bathroom specialist is its showroom, which opened in 2017. While the company originally started in the Boohers’ home, it had migrated into a 1,200-square-foot space around 2013. In 2017, the company sold its former office and moved into a 6,000-square-foot facility. Booher explains the rationale for opening a showroom is threefold: “One, we wanted to be able to show clients where they could see more of the products. Two, we had outgrown our [previous] space as far as offices; and then three, this space actually offered some warehouse space so we could store more materials and things.”

The showroom provides many opportunities for the company, according to Booher. “The main thing is we are continuing to build our showroom, where we are supplying more materials in-house versus outsourcing. We’ve added sink displays, tile displays, more kitchen areas [and] countertop displays,” he says. “We’re trying to make it more of a convenience for the client, so when they come in they can be one-stop shop versus sending them all over town to make their selections.” When it comes to deciding which manufacturers and lines to feature, the Booher Remodeling Company team and their trade partners all contribute to the decision-making, but turnaround time, availability, customer service and quality are key.

No “I” in Company

A team approach to decisions extends beyond what to display in the showroom, which Booher believes is something that differentiates the company. “We are a team environment. Our team members are involved just like Kathi and myself. We share numbers [and] everything so that they understand what the health of the business looks like,” he says. “There’s not many companies [who] do that, and we feel that makes a difference because we’re all working for the same goal. Part of that is when we receive feedback—whether it is positive or negative—we do like to print those out and review them as a team.”

Because of the importance of its team members, Booher Remodeling Company has a thorough interviewing process to ensure they find people who are the right fit. “We are in no hurry to grow. It’s more important for us to have the right people than the number of people, so that’s why we have grown slow,” Booher notes. “When our clients ask what makes us different from our competition, I always say No. 1 is our people. And the key to that—to keeping our good people—is we want to make sure everyone is working around people they want to work with, so that boils down to that team atmosphere we’ve created.”

Another extension of the team atmosphere, beyond the aforementioned sharing, is its use of a leadership team. Booher credits the group with brainstorming such things as how to ensure potential clients are seeing real-life experiences from past clients, resulting in an emphasis of client reviews on the company’s website. This group is also tasked with ensuring the company is adapting to the digital world of today, especially knowing that potential clients are doing their research.

Booher Remodeling Company currently offers a $50 home improvement gift card for referrals, which Booher says clients seem to view as an added benefit but not the main priority. “Most of our clients, if they have a good experience, they want to take care of their friends and family, so they refer us [to them] so they know what they’re getting,” he explains. That said, Booher reports 80 percent of the company’s 2017 leads came from home shows and events; repeat business; web-based listings such as Angie’s List and Houzz; and signage (each 20 percent). Referrals and internet marketing each provided 10 percent of the company’s leads.

As for 2018, Booher Remodeling Company set some ambitious goals, listing a 2018 remodeling gross sales forecast of $4.5 million—an increase of just under $1 million from its 2017 remodeling gross sales figure. At the halfway mark, the company is on track. “We are right in line with where we wanted to be for our 2018 goals. Our gross profit is about half a percent higher than our goal; our average close ratio for our jobs is about $400 more than our goal; and our revenue is right there at 50 percent of our goal,” Booher says. “They are aggressive goals, but the team is buying in. We share the numbers on a monthly basis with the whole team, so these goals are achievable; they’re all rallying and it’s all paying off.” |QR