Insurance restoration contractors remain steady in the face of supply disruptions and a potentially shrinking economy. 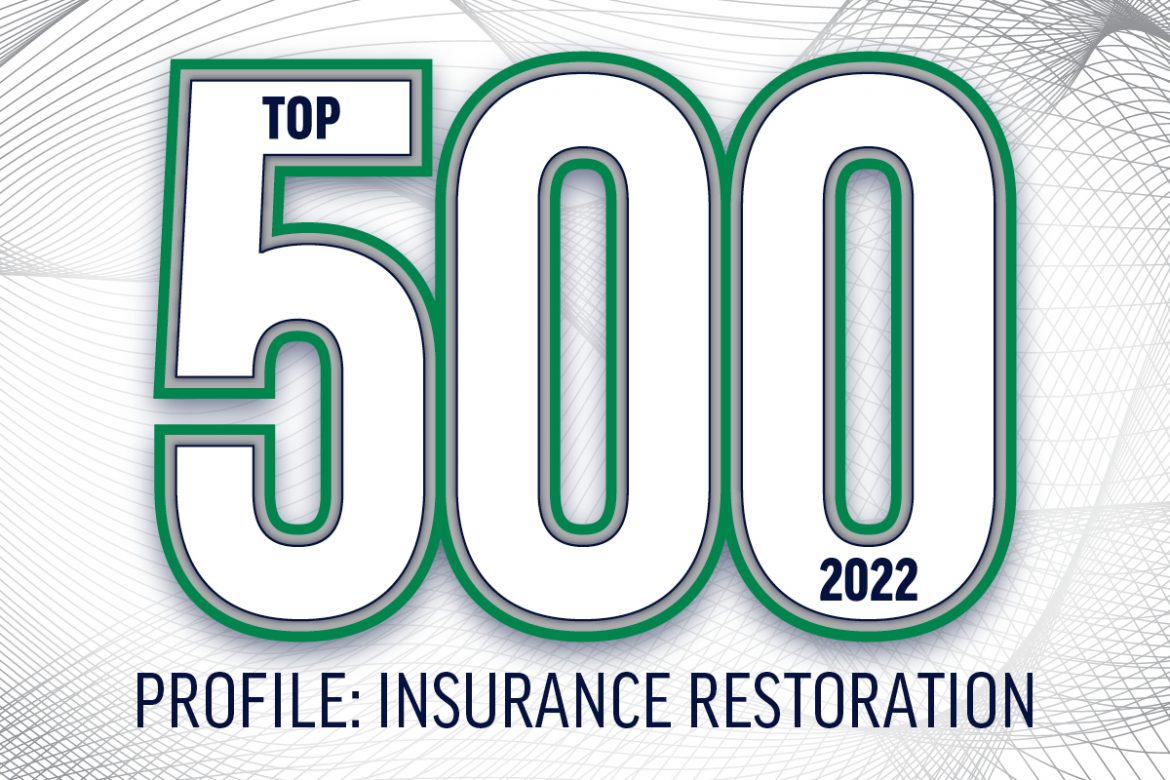 Ralph Bowles has been in the building industry since the early 1980s, following in the footsteps of his father and grandfather before him. “We built until about 1991, and then we started doing more and more remodeling and insurance repair. There was a downturn in construction, and we decided we would go into insurance repair full-time. That was a big step for us; would it be enough? And it has been, it’s definitely been enough.”

Now the president of Bowles Construction (No. 454), he says one of the factors driving business has been his 24/7 response team, which he says has been able to increase the amount of fire jobs they’ve been able to secure as well as late-night and weekend jobs. “We respond right away. We try to have somebody on call who can get a crew together and get those things taken care of within an hour. The fire department has a list [of contractors], and they usually give out about three or four names,” Bowles says. “I feel like if I’m the first one there, knowing people aren’t exactly shopping around for insurance repair—the biggest thing is when can you start, when can you finish—we’ll get the job.”

Venturi Restoration (No. 28), which is also a 24/7 business, does a lot more smaller losses, explains Derek Middleton, vice president of operations, rather than chasing hailstorms or hurricanes across the country—though they do some of that remodeling as well. “A lot of the work we do is somebody’s pipe breaks or there’s a freeze, and water dumps into their basement. Those are the kinds of things that keep us going on a day-to-day basis. That’s why we continue to stay steady during recessions and things like that, because those things still happen.”

Venturi Restoration changed hands right at the beginning of the pandemic, leaving employees not sure what to expect when COVID-19 started. “There’s a lot of consolidation in this industry. There are companies buying up other companies; that’s how we started. Our executive team bought the company back out in 2020, literally a week before COVID hit. So, we spent our 2020 figuring out what COVID was and weathering that alongside transition of ownership with our company. We’re 100 percent company-owned, there’s no franchises. At this point we’ve got everything in place and stabilized, and we’re really looking at growth over the next few years.”

Supply chain issues have continued to wreak havoc on the industry, creating wait times sometimes months out for materials. In the insurance restoration business, however, when homeowners might be facing unlivable conditions until the restoration is complete, supply shortages aren’t exactly an option. Restorers have had to take matters into their own hands, even if it might affect the initial bottom line.

“Everything’s coming in at different times,” Bowles explains. “We are attempting to plan better and order our products in a timely manner so that we have them in place when they are needed. We’ve resorted to stockpiling appliances, which is affecting the bottom line, but it does lead to jobs being completed in a timelier manner.”

He adds that business technology, such as Xactimate and EagleView, have helped improve operational efficiency. “I’m almost 62,” he says. “I’m to the point where I don’t want to climb on a ladder and go up 20 feet in the air to get on a roof. [With EagleView] I can order a satellite view of a room, and it’ll give me all the dimensions that I need to make the repairs to the damage. Sometimes I do bring a carpenter with me, and they’ll get up on the roof and will measure it by hand; but that probably costs more than ordering an EagleView, and if I order an EagleView, I can get it before I go out on the job, and then I’m more prepared to write an estimate.”

Despite the disruptions, the potential for an economic downturn is not of much concern for Middleton. “We’re continuing to expect growth in our markets,” he says. “We tend to do well—or at least be able to be steady—during those kinds of recessions because people still need things fixed. If there’s a floor or a fire, that doesn’t go away, whereas new construction might slow down. Generally, some of the issues we’ll have with labor and subcontractors and things like that start to benefit us in those cases.”

In the case of labor shortages and a lull in discretionary remodeling jobs, he says they usually fare well, as laborers from discretionary remodeling companies find work with insurance restorations. “What we’re watching, similar to 2008, is some of the new construction and expansion starting to slow down. That then pushes some of those resources back to us.” Finding and hiring qualified trade contractors is a perennial problem in the industry, one that Middleton lists as his top challenge in 2022.

For Bowles Construction, Bowles says keeping a membership to the local builders’ association keeps the company working with other people who are facing some of the same problems that they’re facing. “The networking of this group enables us to improve our business model,” he says. “The uncertainty of the future will always hold the unknown, but that is what our business is all about. We may be slow on Monday, but on Tuesday we may be weeks behind because overnight six contracts may come in, all ready to start. Every day is a challenge, and every day is different. You don’t ever see the same thing twice. It’s something new every day. It makes the job fun to see how people are going to handle challenges, and how they overcome obstacles.”  QR