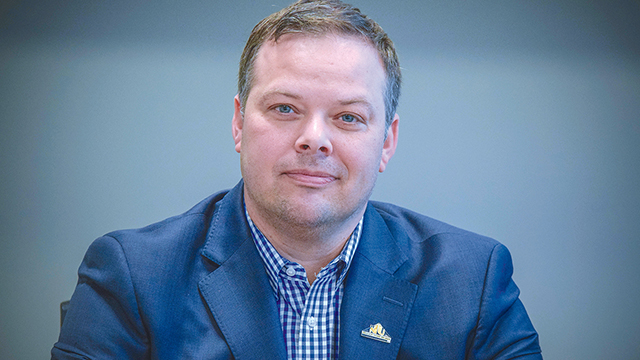 The home improvement business is about intense focus, high energy and, above all, the discipline to work harder than the next guy. In that regard, Patrick Fingles, owner and CEO of Nu Look Home Design Inc., comes from central casting.

Fingles is a passionate leader who relied on tried-and-true and—some might argue—outmoded methods of operating a home improvement firm. There was a set process for canvassing for leads. There was a set sales process. And like many home improvement firms, there was a churn-and-burn mentality regarding salespeople and canvassers. If they did not produce quickly, it was on to the next guy.

“So here’s where the story gets good. So it’s 2016 and we are having our best year ever. I mean we are just killing it. But there was somewhat of a hollow feeling to it,” Fingles says. “It was the endless pursuit of the next deal; it felt as though there was no deeper merit to our company. Our turnover was at an all-time high and, up until that point, we were OK with it. It was part of our success.”

According to Fingles, the culture of the firm was making money. They posted copies of big paychecks on the walls to motivate new recruits. But Nu Look was increasingly having a difficult time recruiting millennials to come into the business on a 1099 basis or even as employees. The company was losing out to newer firms with strong brands like SolarCity, Fingles notes. “We were big, and it was just not sustainable and scalable over the long term.”

Looking out at the home improvement landscape, Fingles says he and his co-founder Tom Bury realized that many successful home improvement firms—even legendary ones like Omaha-based Pacesetter Corp.—tended to bump up against limitations of the traditional home improvement model. Very few firms made it past $100 million for long. “It is not sustainable or scalable past a certain point.”

Pacesetter operated from 1962 to 2005. At its peak in the late 1990s, the company had $135 million in sales and a staff of 2,500. To this day, many in the industry debate the root causes for the company’s demise. And Fingles is thinking big: How do you build a firm with systems and processes that are repeatable and can grow to $250 million and beyond, and perhaps ultimately become a national brand?

In 2017, Nu Look posted much lower sales figures as it implements new compensation plans; new sales processes; and in 2019, a new brand that will help the company differentiate itself and more accurately reflect a mission, vision and values. This year the company is ranked No. 46 on the Top 500 for $28.5 million in sales from 4,041 jobs.

“We started looking at all of the silos of business—sales, marketing, operations, accounting [and] human resources—and we said, ‘OK, so what do we really like? If we were building the business from zero and we wanted to build a big long-term scalable business, what we will care about?’” Fingles explains. “Perhaps importantly, we asked, how can we build a sales pitch that’s based more on truth and honesty, and both on caring about the employees feeling good about what they are saying and the customers feeling good about what they’re saying?”

These changes came along with Nu Look’s conversion of most of its 1099 sales and canvassing contractors into W-2 employees, and the addition of 401(k) plans, health insurance and a more streamlined sales compensation plan—salary plus a fixed commission. And if the lead is developed by the salesperson before the sale, they get an additional bump.

At the same time, Nu Look leadership doubled-down on the process, looking toward the long term. In June of this year, the company outpaced its best month ever and is on pace to exceed its 2016 peak of $42 million.

A new brand and a new name

The company today is operating as Nu Look, but in March or April of 2019, the company will unveil its new name and new brand, which has been two years in the making.

The process of developing a brand was complex. They interviewed five branding agencies around the country and ended up hiring the well-regarded Warchawski firm, based in New York City. Fingles says the initial meetings were eye-opening. The Warchawski team brought them into a conference room filled with advertisements from Nu Look and many of its competitors on the East Coast. The lesson was that everybody looked the same. There was no differentiation between the company and its competitors.

During the 2017 and 2018 calendar years, Nu Look has been implementing its new processes and procedures. They report having more success in recruiting, and sales are rising. The company is on the path to reducing turnover and building a sustainable brand.

The new brand is aimed at creating an emotional connection to clients and employees, Fingles says. Qualified Remodeler will be keeping tabs on its success. And so will many other home improvement firms in the industry. Time will tell how successful they will be in developing a national brand, one that is scalable to $250 million and beyond. | QR