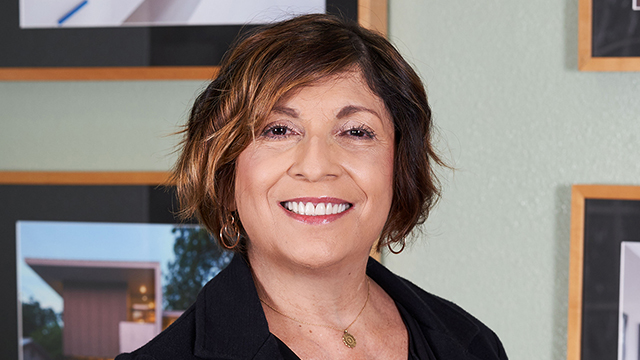 Clarence and Stella Guerrero founded CG&S in 1957 as a family construction business and spent the next few decades raising their eight children within the company, teaching them the trades of carpentry and bookkeeping. After all, they chose the name CG&S as an acronym for their family business mentality: Clarence Guerrero and Sons. In the early 1990s, they sold the company to their kids.

Billy Guerrero became president and head of sales and estimating while Dolores took on duties as general manager. Her husband, Stewart Davis, joined the company as an architect in 1994 and established a design studio for the business. As projects began to require more thoughtful design work, the company incorporated a design/build process and rebranded as CG&S Design-Build.

In 2018, Billy stepped down from the business after more than 40 years of service and received a formal buyout. He passed majority ownership to Dolores, who now serves as president and co-owner with Stewart, vice president of the company. They started conversations about the buyout in 2017, but the process turned out to be longer and more intense than anticipated, Dolores notes.

“We both had attorneys, and we got an evaluation of the company,” she says. “I have to say, for a family business, it’s so much more complicated than it sounds. There’s a lot of emotion tied to it, for obvious reasons. I knew this was my brother’s intent and desire, so it was clear we had to build a management team that didn’t rely just on Stewart and me—that relied on other people to hold different departments together while this transition was being made.”

Dolores solicited advice from her remodeling peer group and other mentors and hired a mediator who specializes in family businesses. “My advice would be to talk about it early and get some assistance from other people,” she explains. “Even more, work on having open, honest, crucial conversations with each other. Because the better you communicate and trust each other—and believe in each other—the better you can go through those very difficult conversations later on.”

CG&S already has begun planning for the next 10 years, when both Dolores and Stewart prepare to exit the business, she adds. “Our biggest challenge, aside from the day-to-day things, of course, is how do we take a 60-year-old company into the next generation and still keep it strong and relevant and competitive in this market? That’s what takes my energy.”

The business strives to maintain the same reputation for quality and reliability that Clarence and Stella instituted in the late 1950s. Projects have expanded and become more comprehensive renovations with outdoor living as a key component, Dolores says.

“They live in their homes, they live in their kitchens, in their dining and living [rooms], and they want these integrated spaces,” she continues. “People just have more confidence in their buying potential (purchasing power), and so they’re willing to do more than they used to. It’s not that they spend willy-nilly. They’re still price conscious—they’re just price conscious in a bigger way.”

An accessibility to loans at reasonable interest rates, furthermore, has given homeowners another option to finance larger projects, Dolores notes. “We’re doing a lot more work with lenders, a lot more than we used to. Lending organizations can provide that service so much better than we can. We don’t have the bandwidth to manage it, and I don’t want to take it on. Doing design/build is enough.”

Finding and hiring qualified workers, however, will remain a challenge for CG&S as contractors stay busy throughout the year. Partnering with several different vendors and building trust with subcontractors can produce a reliable labor pool, Dolores says.

“It’s all about relationships,” she explains. “They know you’re going to pay them on time, that you’re going to be ready for them when you say. All those kinds of things really make a difference. I believe that when contractors can maintain those levels of trust with the vendors and suppliers, then they’re going to perform better for you.”

With an influx of people now moving to Austin, CG&S must keep its brand fresh and relevant among those who might have never heard of the company, Dolores notes. More contractors also claim to offer design/build services and can undercut pricing because they do not have a true overhead, so CG&S needs to sustain an online presence and a connection with its client base.

“Our focus has to be doing a little bit in every single area—selling at higher margins, building in a tighter, more efficient way, and making sure that the overhead doesn’t get bloated. I think every little bit counts,” she adds. QR