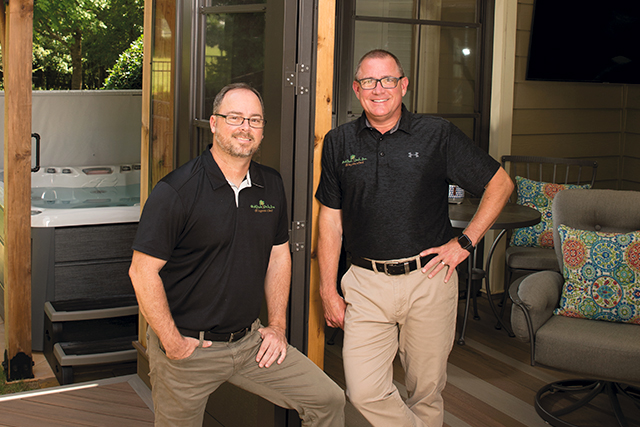 During the Great Recession, contractor Bryan Miller reached out to consumers to ask what his company could do to serve them better—and stay in business. Many people said they would like to repair their deck, so Miller started selling decking jobs. After receiving about 30 inquiries within two months, he realized the opportunity and founded Outback Deck.

Miller also joined a local networking group and met John Gwaltney, whose company excelled in exterior replacement jobs. “Every time we would come up against each other, I would win all the outdoor living projects, and he would win all the siding, window and door projects,” Miller says. “We would just laugh that we were [pursuing] the same job. Then he needed some office space.”

Not long after they began sharing an office, Miller broke his leg and Gwaltney helped him while Miller recuperated. At that point they acknowledged their good partnership and decided to merge their companies into one organization. “We have strengths and weaknesses that complement each other,” Miller notes. “I sort of became the face of the business and the brand ambassador, but I don’t do anything if he’s not involved; the two of us run the business together as equal partners.”

Both had enjoyed building decks for their individual companies, and after reading about two remodeling contractors in Pennsylvania who successfully consolidated their companies, Miller says, they started looking at the business differently.

“They went from being about $1.5 million each to being a substantial organization in their first several years—they got up over $10 million,” he adds. “We thought, Where is the biggest opportunity for us as a business? What is our passion? Where can we put our energy and effort to serve the community best while creating the highest return and profitability for the company so we can grow?

Outdoor projects became their primary focus as more homeowners sought to extend their living spaces and create additional cooking and entertainment opportunities. Interest has “exploded” in the last year and a half, Miller notes, although Outback Deck was prepared because the firm got ahead of the curve years ago. He and Gwaltney put an organization in place to meet the demand.

“It all starts with company culture and knowing who you are as an organization,” Miller says. “When you think about organizations that do well, they all have their own culture, and anyone who’s in that organization typically belongs there because they fit with the culture. We’ve been able to find the best [employees] who are a solid fit for our company [because they] care about people, trust the processes and have confidence that we can deliver all the things we [promise].

“When you have the right mission, vision and values—and know which direction you’re going—then it’s easier to build systems and processes that help you get there,” he continues. “If you don’t have the right people in the right seats, then it’s really tough to build a business that is scalable.”

Networking remains a valuable recruitment tool for Outback Deck, whether the company seeks more salespeople, additional production staff or even a new crew in the field. The organization also benefits from outsourcing its human resources function to a full-time program, which posts ads constantly and scans other construction companies to find people who might be a suitable fit.

“We actually have a number of employees who were our customers first. They had an interaction with us as a consumer, and they could not get past the fact that their experience was so different and so much better than anything they ever had with any other contractor that they decided they wanted to be a part of the company,” Miller explains.

Outback Deck projected $7.2 million in revenue for 2020, and even though Georgia did not shut down its business in response to COVID-19, the company ultimately fell short by about $1 million, Miller notes. A bigger issue, however, have been the price jumps associated with materials. “Lumber is now trading at over $1,000 a board-foot, which is almost unheard of; pre-COVID, it was only $300,” he says. “It’s more expensive right now to buy a 2- by 12-inch, 20-foot piece of lumber than it is to buy a piece of steel, which is hard to believe.”

As a result, the company must stay cognizant of the differential between material prices when it sells a job and when it actually starts the project. “Last year we did 172 projects, and we built two wood decks. We’re almost a 100 percent synthetic shop,” Miller adds. “You can get a synthetic deck board for about the same cost as you can get a piece of lumber. It almost doesn’t make sense to do [wood] when you look at the maintenance and ongoing expense, and the quality of lumber today.” QR