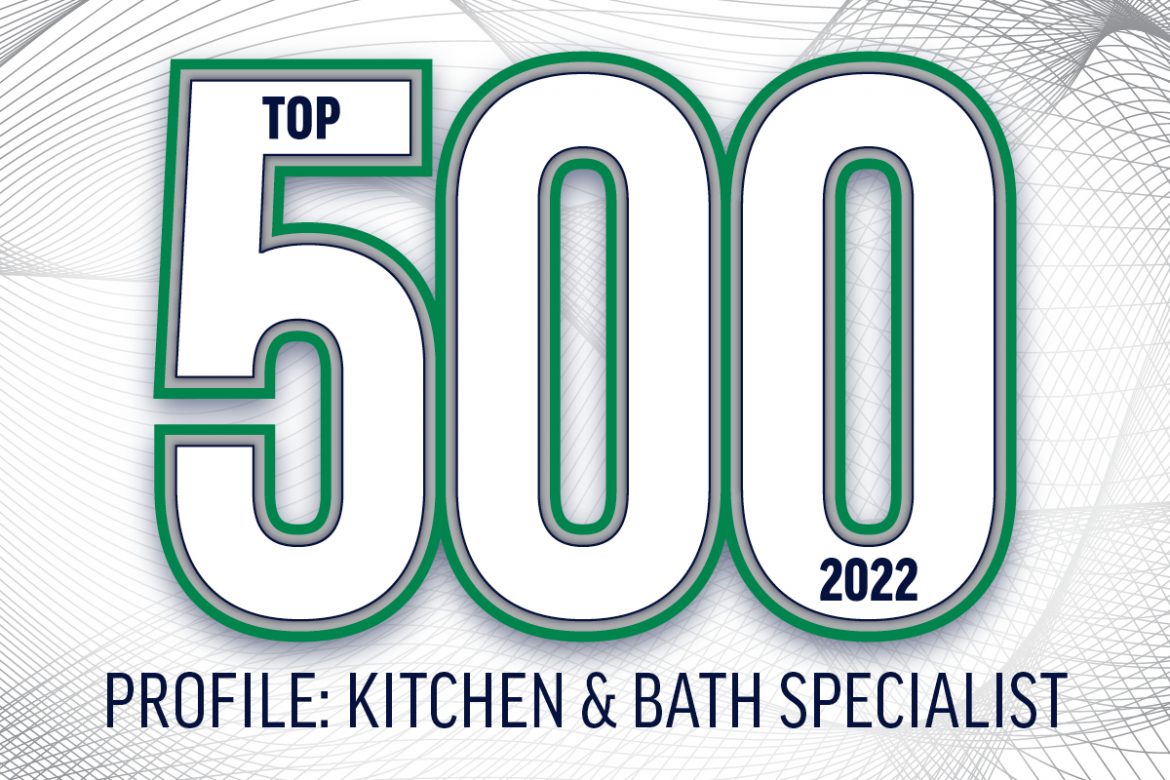 Like many other design-build companies, remodelers who specialize in kitchens and baths have grown considerably over the last few years. But emerging signs point to leaner times ahead for this segment. Although average job sizes continue to increase, firms are missing out on smaller jobs that might call for just a kitchen or master bath and do not involve other areas of the home.

“Those kitchen and bath jobs have always been a bread-and-butter category for us,” says Tom Coan, president of Highland Design + Build (No. 495) in Vestavia Hills, Alabama. “But over the last couple of years, those jobs are getting rolled up into a bigger, multi-room project or part of an addition.”

For many years, the company ran an average job size of $60,000 to $70,000 and would take on a few additions here and there, Coan adds. Over the last three years, however, its average job size rose steadily to $160,000. “My goal when I started the business was to always have a balanced book of business and try not to be pigeonholed as doing one thing. But we’re seeing fewer small projects, making us more dependent on the big ones.

“I’d love to know if there are, in fact, fewer of those free-standing kitchen and bath jobs or if the client base thinks we only do larger jobs,” says Coan, who has noticed his project pipeline thinning out recently. “I’m worried the decrease in smaller job leads is a sign that customer base is pulling in their horns.”

Highland used to enjoy a 50/50 split between repeat and referral business and leads generated by marketing, Coan explains. The ratio has shifted closer to 70/30 in favor of repeats and referrals, a sign the volume and source of its leads are changing. Earlier in the business, the company could break down marketing efforts into discrete buckets—but now effectiveness is harder to measure.

“We ask, ‘How did you hear about us?’ with every person that comes to our business. And now, if it’s not a repeat or referral, 95 percent of the time they say, ‘I Googled and you came up, so I kept probing on it,’” Coan says. “When we dig deeper, they’ve formed a general impression of what we’re all about from a broad range of social media. It’s no longer one or two specific things.”

Cash flow has been hard this year for Highland as supply chain issues keep delaying materials and preventing jobs from starting. “We can’t hit production milestones and bill a client because so many of the things we need are in such short supply,” Coan notes. “The day that we sign the contract with the client, we’re going out and buying all the fixtures and all the appliances for the job because we’ve had too many experiences where the thing you need is no longer there when you need it. We’re carrying big chunks of expensive material for 10 and 12 weeks just to make sure our jobs don’t get stopped mid-production.”

The limited availability not only pushes out project timelines, but it also drives up the prices of labor as well as materials. “Sometimes it’s 6 to 12 months to go through the design phase to get permits to sign a contract—and prices have gone up 20 percent in that time,” says Andrew Shore, owner and president of Sea Pointe Design & Remodel (No. 145) in Irvine, California. “Not all clients are understanding that costs have gone up, so they start to question whether we’re charging more than we should.”

Sea Pointe does its best to explain the circumstances to customers and writes escalation clauses into contracts to protect against higher prices. Similar to Highland, the company also orders as much material as possible upfront to lock in current pricing, Shore notes. “Lumber over the last 18 months has been all over the board. We had a couple of jobs that we had to go back and give them a change order for the increase in lumber costs. It’s a bit of a game right now; it’s a mess.”

Cabinet lead times have started to come down, but vinyl windows are 16 to 20 weeks out, with many other remodelers facing the same dilemma, Shore adds. “We had a couple of new appointments probably six months ago now, and we told them we can’t start anything for likely six months and then we’ll come out, take a look and start the planning process. They said, ‘Oh, I can’t wait that long, so I’ll just get somebody else to do it.’ And then 10 minutes later, they’re calling us back.”

Kitchen and bath projects still represent the majority of work, although larger job scopes require structural consideration to create an open concept. “Now we have to get architectural plans and engineering. They’re changing windows, moving walls and relocating appliances—that type of thing. We’re not doing as many of what we call ‘remove and replace kitchens,’” Shore explains.

The bigger projects present more of a logistical challenge because materials need to be on site at the correct time, and any delays in delivery can upend the job. As a result, Sea Pointe has tweaked its marketing to highlight smaller, simpler projects that should be both quicker and easier to build, Shore says. “At the end of 2019, we were doing a lot of live events and networking, and we started to shift to all digital marketing. When COVID hit in 2020, we were already four months into our pivot toward digital marketing, so we had a good head start. We started doing online seminars to make up for the live events that we couldn’t do anymore.”

In 2021 the company grew about 46 percent, while this year the goal was 12 to 15 percent, Shore notes. “That [2021] was too much growth in one year to really have a good handle on everything, so we wanted to slow that down. We will still grow this year, but we’ll probably be more in the realm of about 5 percent. I think we’re on track right now for 5 to 7 percent growth [in 2022].” QR